After the disappointing Call of Duty: Ghosts, Activision needed fresh ideas, and Sledgehammer was just the developer for the job. Even before it delivered its first game, a weight has been lifted off of Infinity Ward and Treyarch’s shoulders. No longer does it need to turnaround a Call of Duty every other year, and there is more time to figure out how to make the series fresh again.

As a result, Sledgehammer has a lot riding on Advanced Warfare, the newest game in the series. It has everything going for it — a fresh futuristic theme, the same core multiplayer gameplay everyone knows and loves, and the talented Kevin Spacey running the show with the campaign.

The gambit paid off, even if it won’t bring back in those who have sworn off the series. 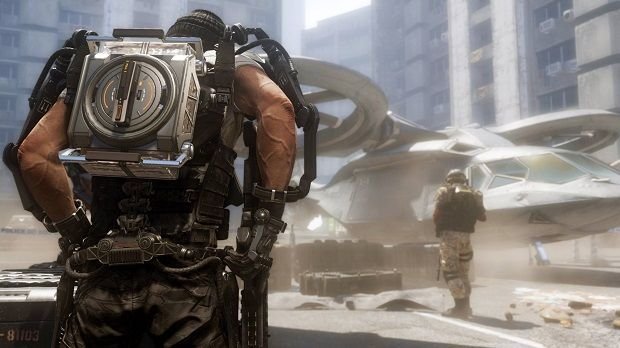 Ghosts was ultimately a half-measure. While the James Bond-esque satellite kinetic rod cannon was a cool idea, the game didn’t really explore futuristic technology as much as augmented existing tech. Advanced Warfare throws any conception of modern-day limitations out the window, and it’s that much better for it. The gimmick this time around is the Exo Suit, changing the face of near-future war into that of a super soldier.

The suit allows you to jump higher, dash faster, and slam into things with greater strength than ever before. Right off the bat the game feels fresh — like a faster-paced Call of Duty — like something the series should have experimented with before this point. Heck, you can even air dash and double-jump — in a Call of Duty game!

Items like the Threat Grenade, which shows a heat-reading of all of the enemies within your field of view really drive the point home that this is not your typical fare, and I love that it feels so different in just about every game mode. You can also do things like flip-up a makeshift riot shield instantly from your suit, cloak, and shoot grenades out of your arm. Frickin’ laser beams are also in and are a joy to see in multiplayer.

We’ve finally come to the point where the franchise can be considered “current-gen” by any standard. While Ghosts was developed primarily for last-generation hardware, the PC, Xbox One, and PS4 versions have the top honors here, and it shows. The faster gameplay really lends itself well to a farther draw-distance and a smoother framerate, and load times are drastically improved.

For many, the big draw is the new story, featuring the lovable Kevin Spacey as Jonathan Irons. Over the course of 15 missions you’ll embark upon a journey with Spacey as your PMC boss, earning new gear and augmentations for your suit as his character starts to become more and more power hungry. Spacey does not phone it in — he gives a great, animated performance that’s worthy of his top billing, and the campaign is worth playing just for him alone.

Of course, the missions themselves are still practically on-rails, which will probably lead many people out there to skip the campaign again in favor of jumping right into multiplayer. With games like the recent Wolfenstein bringing back the glory of open-ended maps, I would have hoped that Advanced Warfare would marry the signature action style with a less linear map layout. If you know what you’re getting into, though, it’s better than the last three Infinity Ward campaigns. 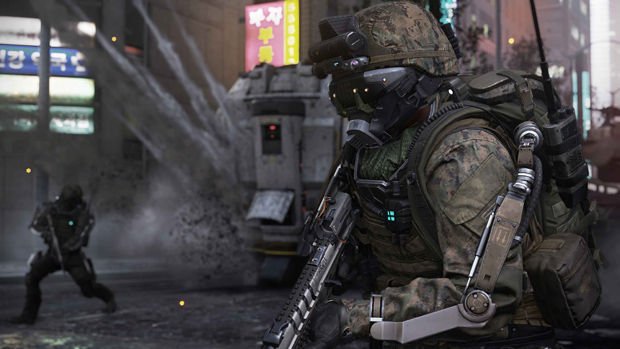 The additional “Exo Survival” mode alongside of the campaign is kind of a throwaway however, hearkening back to the Survival Mode of Modern Warfare 3. It basically pits you and a partner against an increasingly deadly set of wave-based enemies, which is just as dull as it sounds. With no real story or gimmick such as aliens or zombies, there’s a very limited amount of enjoyment to be had here. Zombies are said to arrive with the upcoming DLC, but for now you’re out of luck.

Abbreviated load times are particularly welcome for one new feature for the series — the pre-game firing range. Gone are the days where you’re scared to try guns out of fear of ruining your kill to death ratio. Now you can almost instantly fire up a virtual range to test out your gear in before the vote and countdown ends to give you a better feel of your chosen loadout.

Multiplayer once again is the main event, and some interesting changes have been made give Advanced Warfare quite a long shelf-life. In addition to the tried and true Prestige system, “Supply drops” (read: loot) are also in this time around. Now instead of using the same few guns over and over, playing more and completing challenges will earn you unique drops, with new statlines to play with. 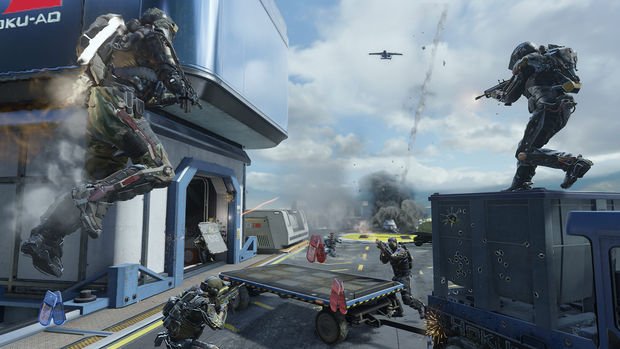 When coupled with the new training ground between matches, you’re actually encouraged to change up your style constantly — a fresh concept for hardcore fans. I also didn’t notice any real balance issues with any of the newer weapons or variants, which is also good news for casual players who still want to remain competitive.

My favorite addition is probably the “Uplink” gametype, which is basically futuristic basketball. A round object is thrown onto the battlefield, and two teams have to kill each other for it. Upon grabbing said object you can either throw it or pass it to a teammate, and the ultimate aim is to get it into the floating enemy uplink “goal.” Yep, it’s a blood sport, and it’s a ton of fun. All of the classic modes like Ground War and team deathmatch return as well.

The full-on customization “slot” system returns, which lets you change your loadout to your heart’s content outside of your basic primary and secondary weapons, and all of those wonderful toys will give you a lot of options. Killstreaks are now customizable this time around, which lets you change the parameters of the same boring old UAV you’ve played with for years. It’s another small mechanic that brings online play forward and makes it ultimately more interesting. Multiplayer takes place across 13 maps, which isn’t a lot, but thankfully the futuristic touch changes them up considerably. 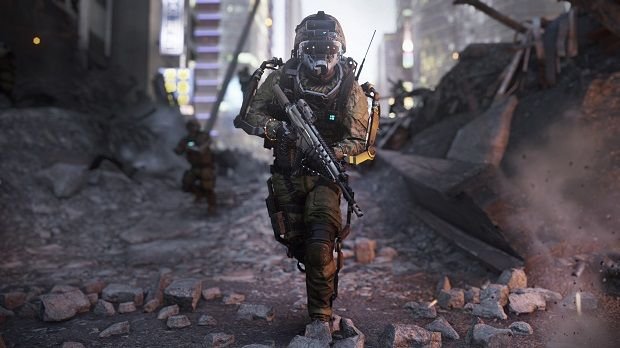 Call of Duty: Advanced Warfare plays it a little too safe with the campaign, but it feels like a real core entry in the series, and will please fans who are jaded after last year’s release. While Treyarch is still the king of Call of Duty in my eyes, Sledgehammer Games has shown itself to be more than capable of taking over with its debut entry. Infinity Ward is now the odd man out.