I can’t get into most adventure games. Hunting for objects and attempting to use them in puzzles is typically too tedious for me to enjoy, and drawn-out narratives between characters with little to no interaction have literally put me to sleep before. Off the top of my head, I can only think of one adventure title I’ve liked previously which was the arguably underappreciated Oxenfree.

Now I can officially say there are two adventure games I like. 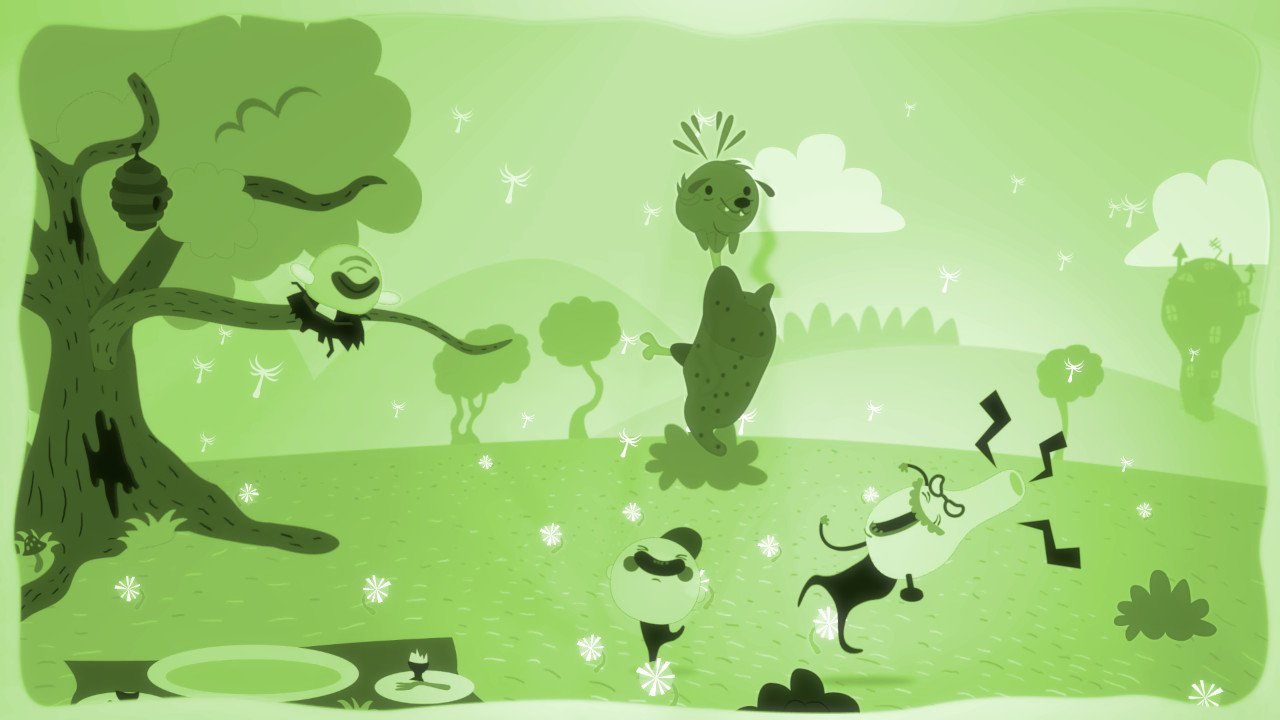 In this 2D horror puzzle adventure game you play as Bulb Boy, a young light-bulb person who lives in a light-bulb-shaped house with his flying dog and oil-lamp grandpa. Seemingly out of nowhere a monstrous force arrives and starts to unleash horrific monsters in Bulb Boy’s house, which he then has to defeat to save the day.

The story of Bulb Boy is rather simple, which is unsurprising considering the game can be 100 percent completed in around two hours. There’s no dialogue aside from a few gibberish lines that come from the main characters’ mouths, and only a few cutscenes to show events unfolding.

Thankfully, that is all you really need since the characters are so expressive thanks to the charming animation which is reminiscent of Ren & Stimpy meets Courage the Cowardly Dog. That is honestly a great way to describe the game in general. The monsters aren’t exactly the scariest and there is plenty of gross-out humor to be found here involving food, poop, and other bodily fluids (specifically snot). One thing that may turn some people off is the fact that entire game is played in an almost Game Boy-like green color with the occasional Virtual Boy-like red during cutscenes or deaths. I didn’t mind it so much myself and appreciated the developers doing something original.

Originally Bulb Boy was a point-and-click adventure title for PC, but the Switch port is controller-based only. This isn’t a huge issue as the characters control fine, if not a bit slow, although it would have been nice to have traditional point-and-click kind of controls available via touchscreen when in handheld mode.

Most of the game is spent finding a selection of items in each room, and figuring out how they work together to solve the puzzle(s) of said room. When close to items that can be picked up or interacted with an arrow will show up. Puzzles here are simple, and I didn’t have any fuss solving any of them. Maybe even too simple to the point that it feels like the game is just breadcrumbing you along with things to do that aren’t all that engaging, but I didn’t mind due to its short length.

A few sections require hiding from monsters in easy stealth sections or taking paths to avoid enemies from catching Bulb Boy. I absolutely hate stealth in most games because I’m more one to go in guns blazing, but here I didn’t have a problem with it. There is a boss fight, of sorts, at the end of the game that is the most ‘gamey’ thing about Bulb Boy and also probably its weakest moment thanks to it not being obvious what to do. Another such moment is one where the left stick controls Bulb Boy and the right controls his dog, which the game doesn’t tell you and I figured out on accident by pressing buttons randomly. Aside from this moment the right stick is never used.

I’m a big fan of the art style, animation, and cute yet creepy nature of Bulb Boy that reminds me of cartoons from my childhood. Like for real, this is probably the closest thing we will ever get to a proper Courage the Cowardly Dog game, so if you have nostalgia for that show, pick this up. The two-hour length and lack of replayability will probably be a turnoff for some, but if you’re like me, you’re desperate for content to play on your Nintendo Switch and for $9 you could do much, much worse. Trust me on that one.

[This review is based on a retail version of the game purchased by the author.]