HOLD ON A SEC, BRO, GOTTA WRITE A REVIEW

I’m all for sittin’ down and drinkin’ one with the bros. I usually call co-op games bro-op games. I can laugh at silly, referential humor that mostly amounts to “remember that this movie existed?” I love ’80s action movies just as much as the next guy. Theoretically, Broforce, a game that combines the above sentiments into one sweaty, buff, possibly (hopefully?) homoerotic package, should be something I could enjoy forever. 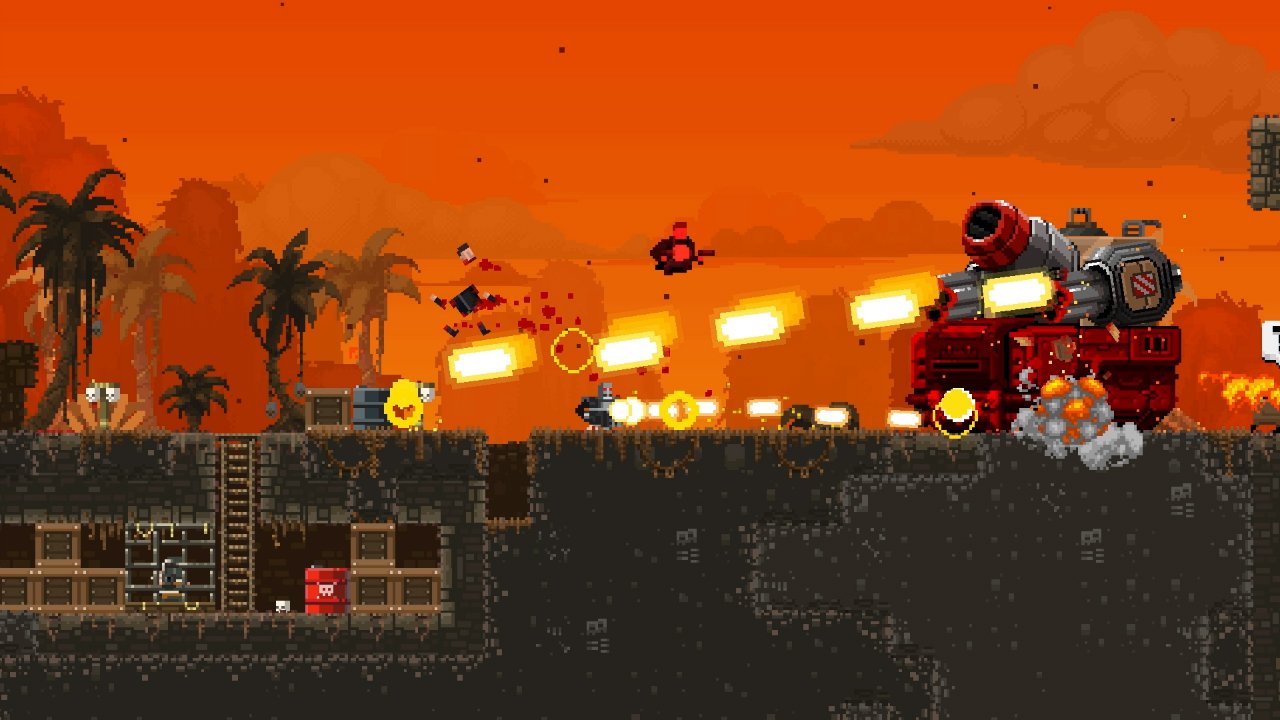 Let’s start with the setup: playing as various action heroes mostly from the ’80s and ’90s, players will fight soldiers, aliens, and eventually Satan himself (this is shown on the launch screen, and if you cry “spoilers” for Broforce, I’m legally allowed to kick you directly in your shin). Get ready for puns like Rambro, Bro Hard, Time Bro, and Brommando. With few exceptions, each character feels unique. Where Rambro has a straightforward assault rifle/hand grenade loadout, Brocketeer can jump higher and use an air dash attack.

It plays like wearing a Monster Energy drink sweater while playing Contra. Your task is to kill mooks from left to right while destroying practically everything on each stage. Reckless use of explosives can lead to creating gaps that your Bros will not be able to pass, so even though Broforce tends towards chaos, some degree of caution is required to progress. If you really want to see how quickly you can screw yourself out of finishing a level, I recommend four player couch bro-op. It’s fun and frustrating in equal measure.

Each stage contains captured Bros that provide extra lives when rescued. Save enough of them, and you’ll unlock new characters to play with. Herein lays the mechanic that separates Broforce from other side-scrolling shooters: when you gain a free life, a randomly-selected Bro will take the place of your current avatar. Some will view this as part of the challenge, where players will need to remain flexible and be well-versed in all characters to be able to work their way towards Satan. In practice, it’s usually not too bad, but some characters are incredibly situational, which leads to many a Bro’s death. 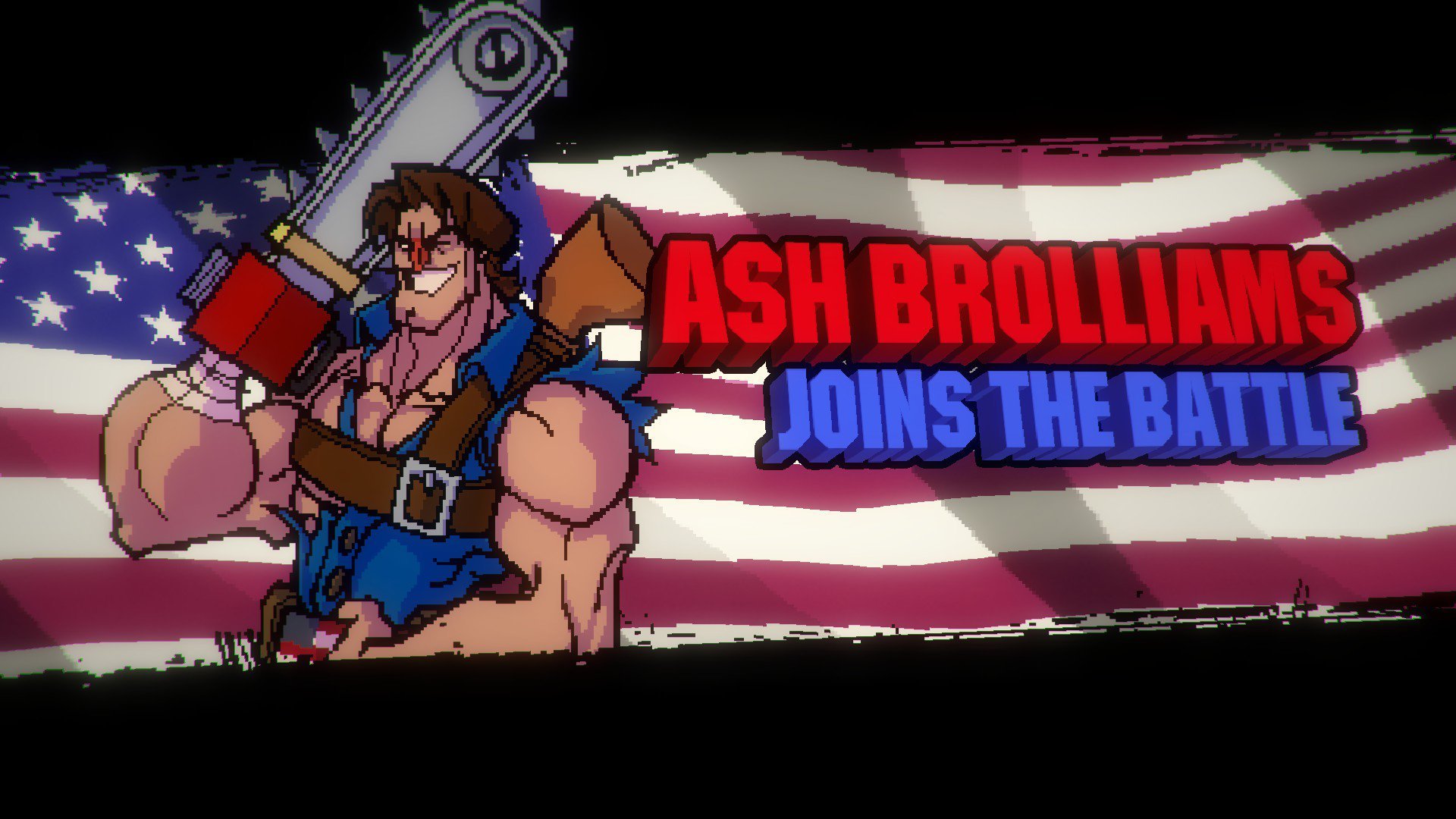 Take Cherry Broling (remember Planet Terror?), who shoots downwards when she jumps, Downwell style. If your current hero has a forward trajectory and you’re fighting a boss that’s across the screen, and you randomly draw Cherry for an extra life, good luck. I appreciate the variance in abilities, but there are too many moments when your randomly-drawn Bro is simply not adequate for the situation, and some levels feature checkpoints that are just far enough apart to encourage you to walk away from the game for some time. I guess not all Bros are created equal.

Still, unlocking characters is easily the highlight here. Using the Bro in Black’s Noisy Cricket weapon or Brade’s sword to cleave through dumb enemies is a hoot, and the joy of earning the Bro-ified Ash Williams warmed my dark little heart. It was kind of a kick in the crotch when I would start tinkering with a new character and almost immediately have to switch to someone else to gain an extra life. I took any advantage I could get though, because death is often quick and cheap. I think I was killed by falling rocks more often than I was killed by gun-toting soldiers or aliens.

Though reaching the other side of the screen is always the ultimate goal, Broforce does try to change it up a bit later on by adding mechs to commandeer and friendly soldiers to arm. These segments are too far and between. There are even a couple of levels that require a focus on stealth and platforming, which are welcome. A few more of these could’ve helped quell repetition, because as it is, the change in enemy types isn’t enough to keep the adventure engaging throughout. 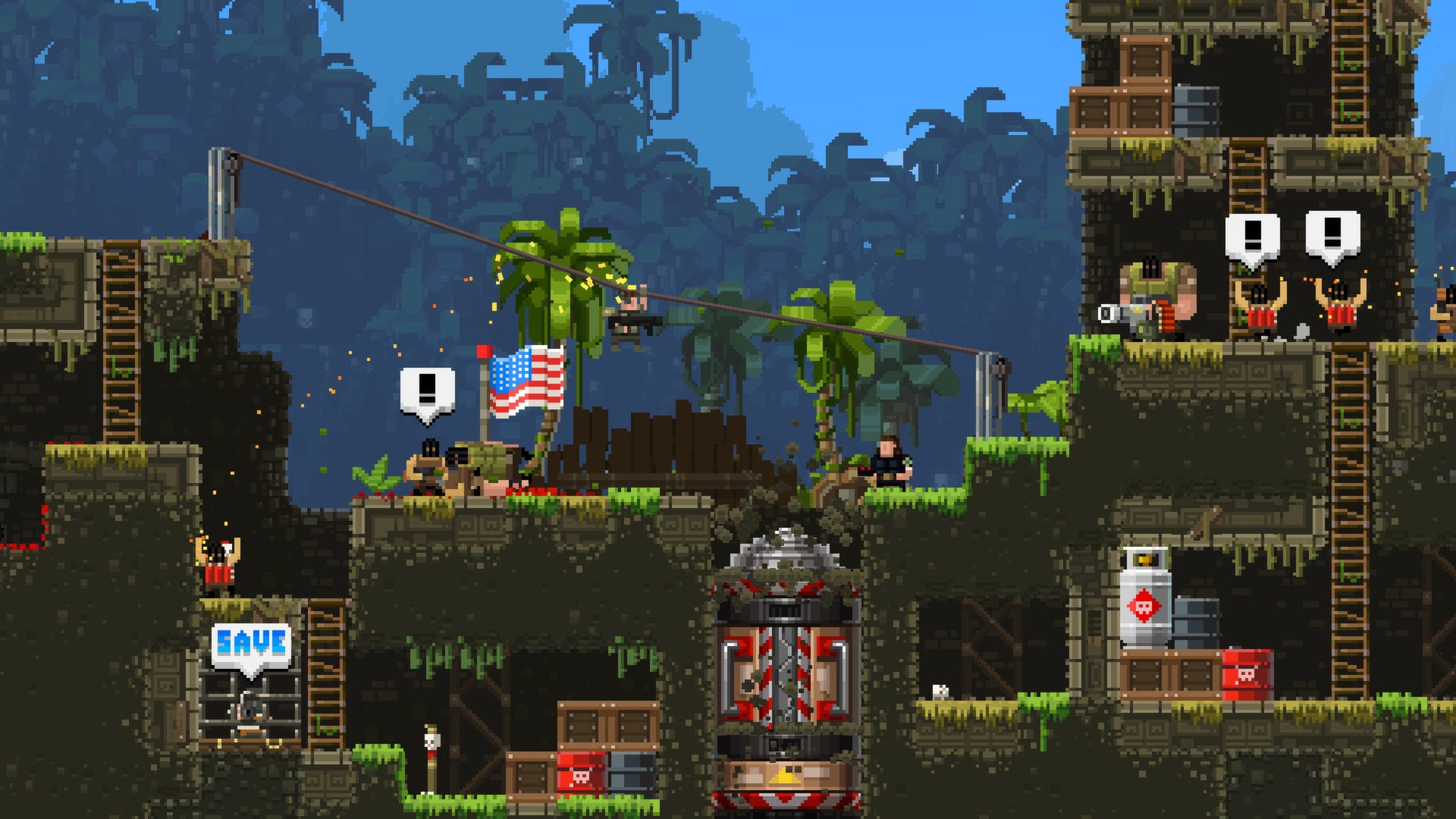 Gameplay mechanics aren’t the only place that Broforce dips into overwhelming irritation. The PlayStation 4 port has a few technical issues that aren’t present in the PC version, and they’re not the type you can hand-wave away because the game is entertaining. In each level, a few seconds after spawning, I would suddenly be unable to move or shoot. I thought it was my controller at first, but after some testing and Googling I found out it’s a widespread glitch. Later levels have enemies right in the beginning, so I died an infuriating amount of times because I was simply unable to do anything. Coupled with load times that can be thirty seconds long between deaths, I was about ready to throw my copy of Die Hard into the ocean.

The framerate also loves to take a dive into the abyss whenever shit gets too crazy. In a game where explosions occur as often as the action movies it’s trying to pay homage to, this is unforgivable. I actually thought that the final boss was supposed to be in slow motion when I was playing, because I dropped to 15 frames per second for the entire battle. I’m not sure if this is something that can be patched out, but hopefully it’s being looked into.

After finishing the too-long campaign, there’s an Ironbro mode (where each Bro only has one life) and a level editor to tinker with. It seems robust, but I didn’t spend much time with it. This all adds up to a decent amount of bro-time if you really want it, but I’m fairly certain whoever you play this with will end up being a not-bro for a little while. Broforce could have been a fun “Hoo-rah ‘Murica” romp, but it comes with artificial difficulty and bugs that aren’t worth dealing with. You’re better off watching First Blood again and pretending Satan is going to show up at the end.