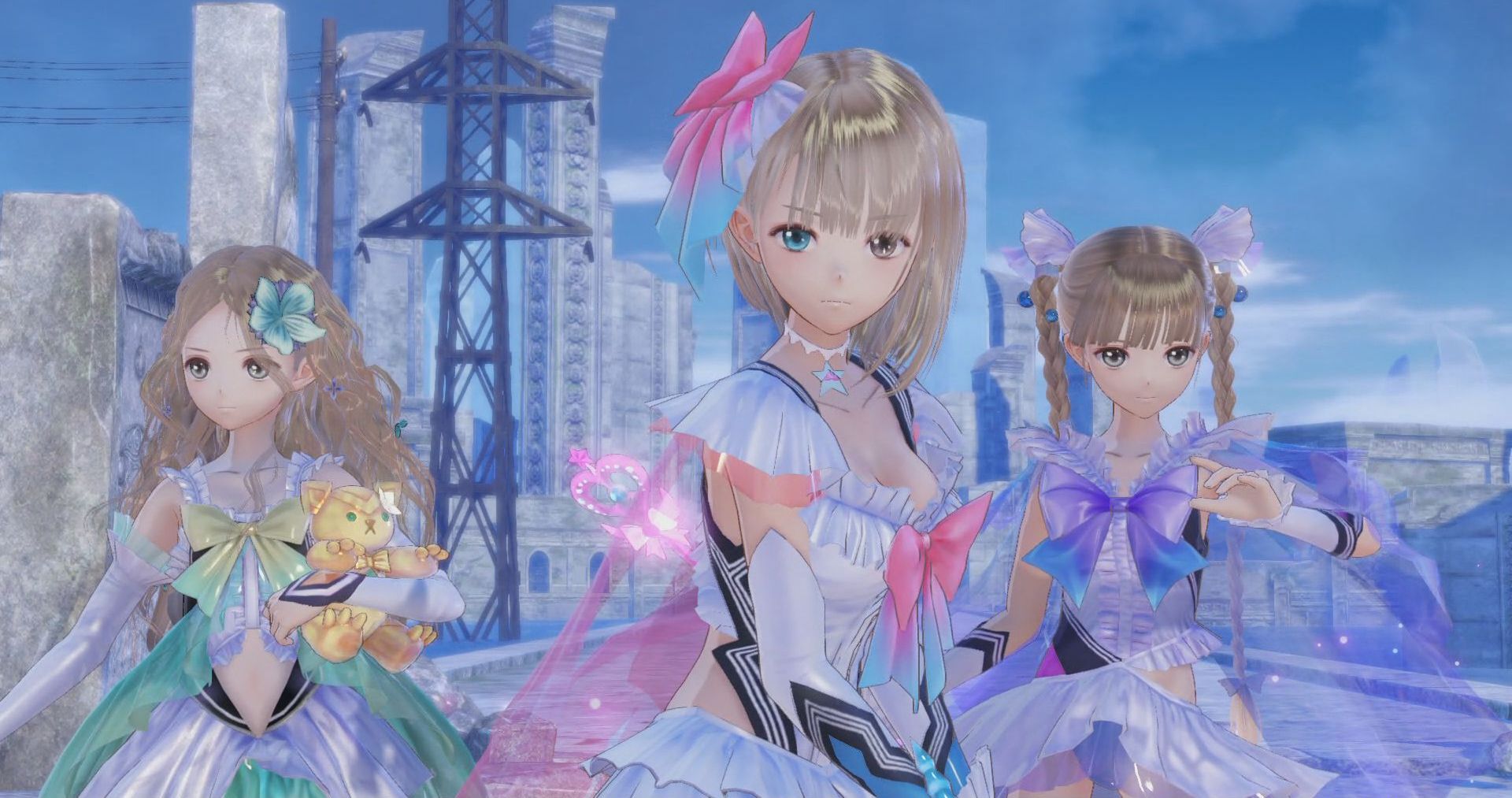 If you’ve ever dreamt of being a Japanese school girl, or wanted a modern Sailor Moon role-playing game, Blue Reflection is about as close as you are going to get. You play first-year Hinako Shirai as she attends Hoshinomiya High School. Student by day, sword-wielding magical hero also by day.

After injuring her leg, Hinako’s dream to become an Etoile, French for top ballerina apparently, looks unlikely. She meets friends new and old and suddenly is transported into a another world. She later meets Yuzuki and Lime Shijou who introduce her to her magical abilities which include allowing her to use her leg once more. Of course they have the most Sailor Moon-esque transformations into their cute and frilly fighting outfits. 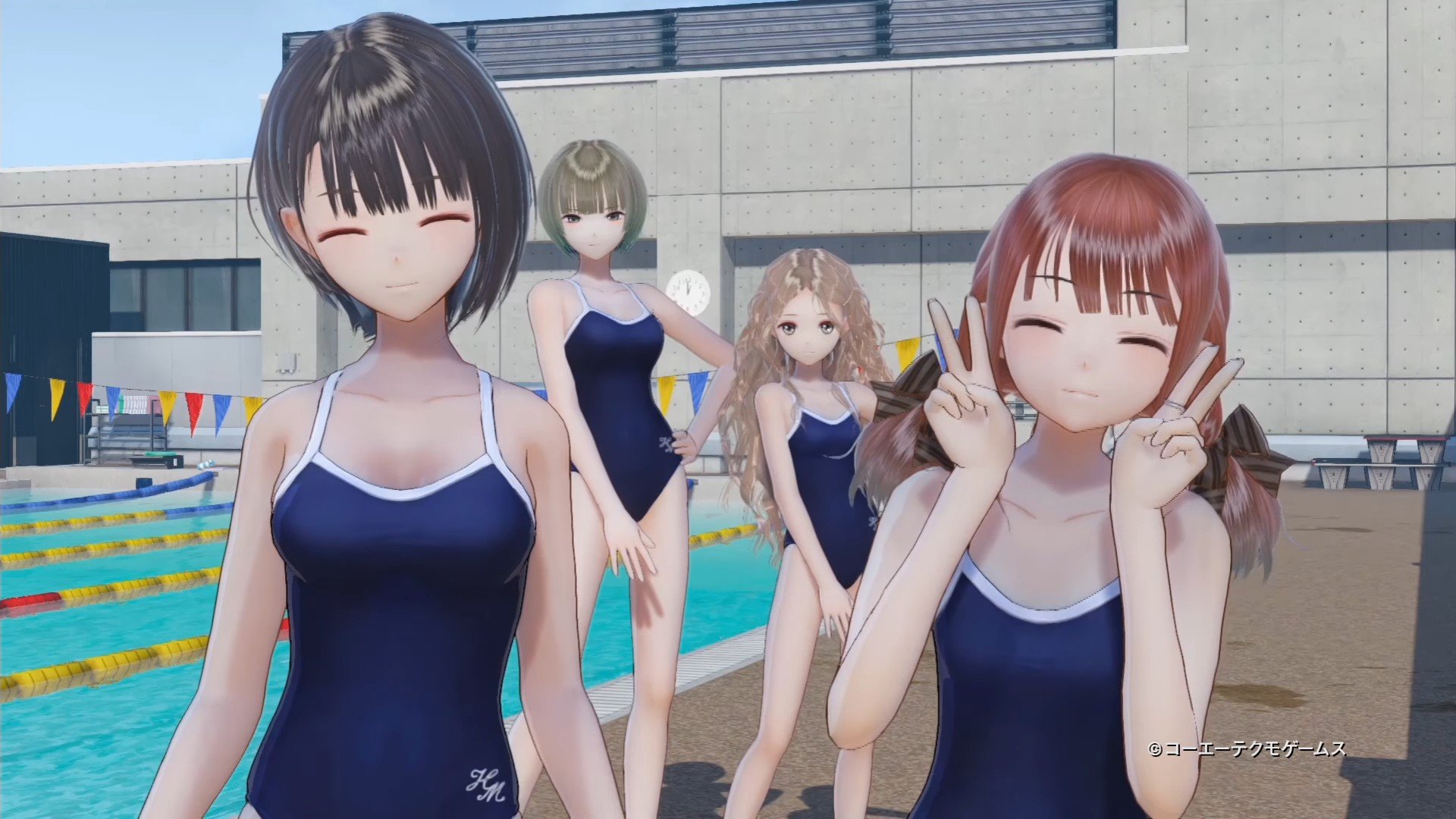 There is an overarching threat that looms, but the story is focused on the day to day high school like of Hinako as she makes friends and develops relationships with them. Whereas in Persona 4 the daily interactions mostly contribute to the overall plot, most of your interactions, both critical path and side missions, are episodic slice-of-life moments. “School girl simulator” is the first term that comes to mind.

Hinako and her friends learn how to use social media, go shopping, do their makeup, talk about boys, and have some contests against each other. It’s quite a feminine experience that would make the Call of Duty or Gears of War tough guy audiences run away. Blue Reflection is almost a game made for girls, but the aforementioned activities aren’t played and there’s just enough softcore fan service that let’s on who this is intended for.

Makeup, shopping, and so on are performed in cutscenes without the player performing any input or choices. You can select outfits for each of the characters in the real world, but it appears most of those will be DLC as I only had the swimsuits available after the default uniform. 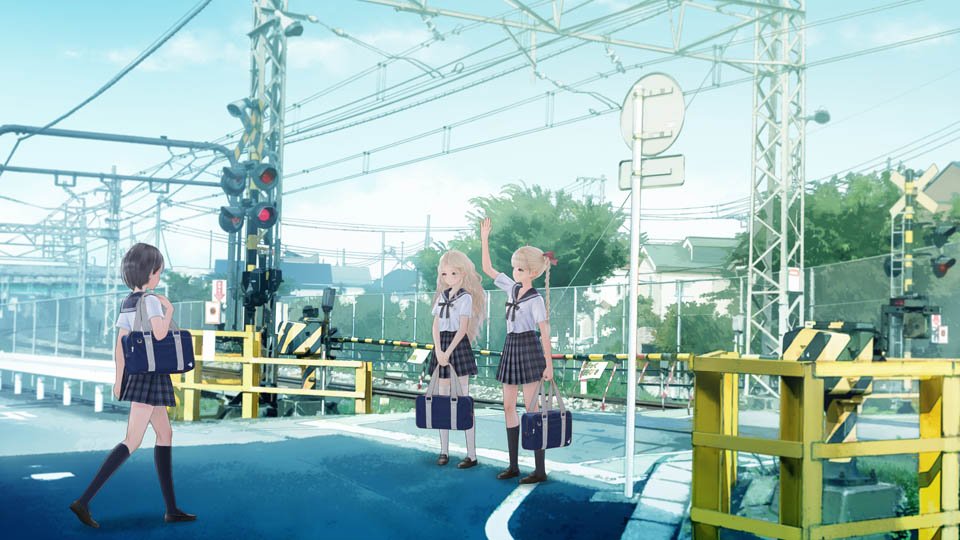 There is an option to switch to a wet version of each costume though, which makes transparent white shirts even more transparent. Like I said, almost a girls game, but not quite. If doing make-up and dressing up is the experience you are looking for, this game doesn’t quite have it. You’d want to play something like Style Savvy.

The translation seems to have been done in-house. It’s correct for the most part, although there are some typos and weird things. “Enter the bath” is a bit of a literal translation, but it wouldn’t confuse anyone that it means “take a bath.” The one thing that threw me off slightly early on was half the time Lime is called Lime, and other times it is written as “Raimu.” It’s the same name, same character, but they apparently didn’t choose one. Still, I will take some unnatural lines here and there over memes and localization teams who are instructed to inject personality and humor where it doesn’t exist any day. 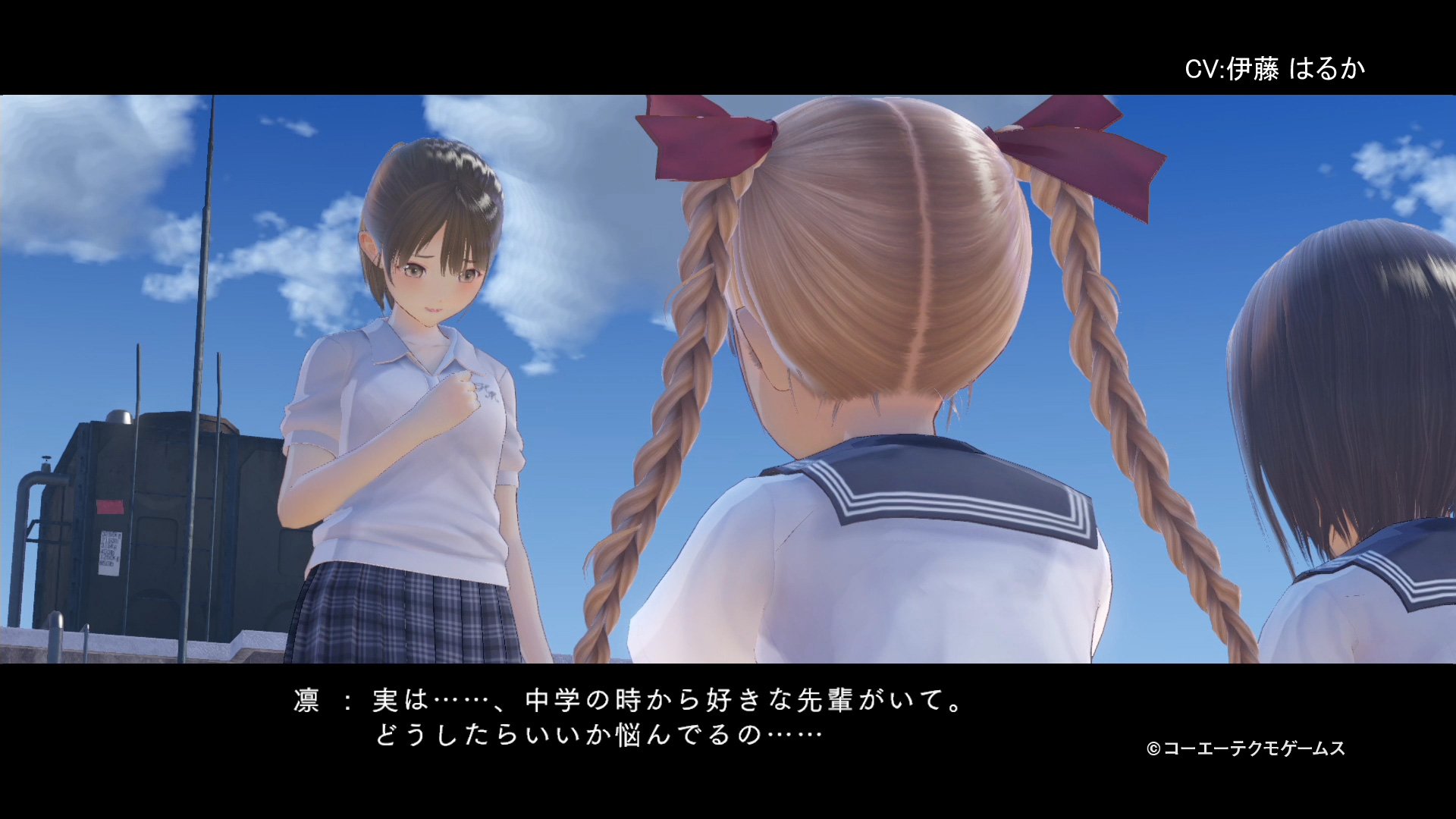 Regarding the aforementioned activities (shopping, going to a restaurant, visiting an amusement park, doing makeup, etc), some are main missions or side missions, and others are social link-style dates where you improve your relationship with side characters. The cast is all female and while there are some “more-than-friends” moments, no romantic relationships develop in the games. Raising your affinity with side characters affects their performance as support characters in battle.

The playable party consists of only Hinako, Suzuki, and Lime, but you can assign one of the many support characters to the main cast. When you perform an attack, you can press a button to activate a support characters move. The tennis girl will spike a tennis ball into the enemy for damage, while a girl who likes makeup will sprinkle makeup onto the party to heal them.

Hinako’s stats can be raised by choosing certain activities at home such as stretching, studying, or taking a bath. However the main way to strengthen the party is through fighting in the Common, where enemies linger about along with obtainable items. Enemies are easily outrun if you don’t want to fight, but while the combat is particularly deep or difficult you’ll want to take the time to level up through out the game.

Leveling up allows you points to put into four basic stats: attack, defense, support, and speed. Obviously they’re all important but I found a focus on attack and speed made the game go smoothly since the turn-based combat is based on cool-down time between attacks. Having all HP and MP restored after each battle, regardless of difficulty level, helps as well. There’s no equipment like armor or weapons to acquire, so the fighting portion of the game is as simple as the main plot. 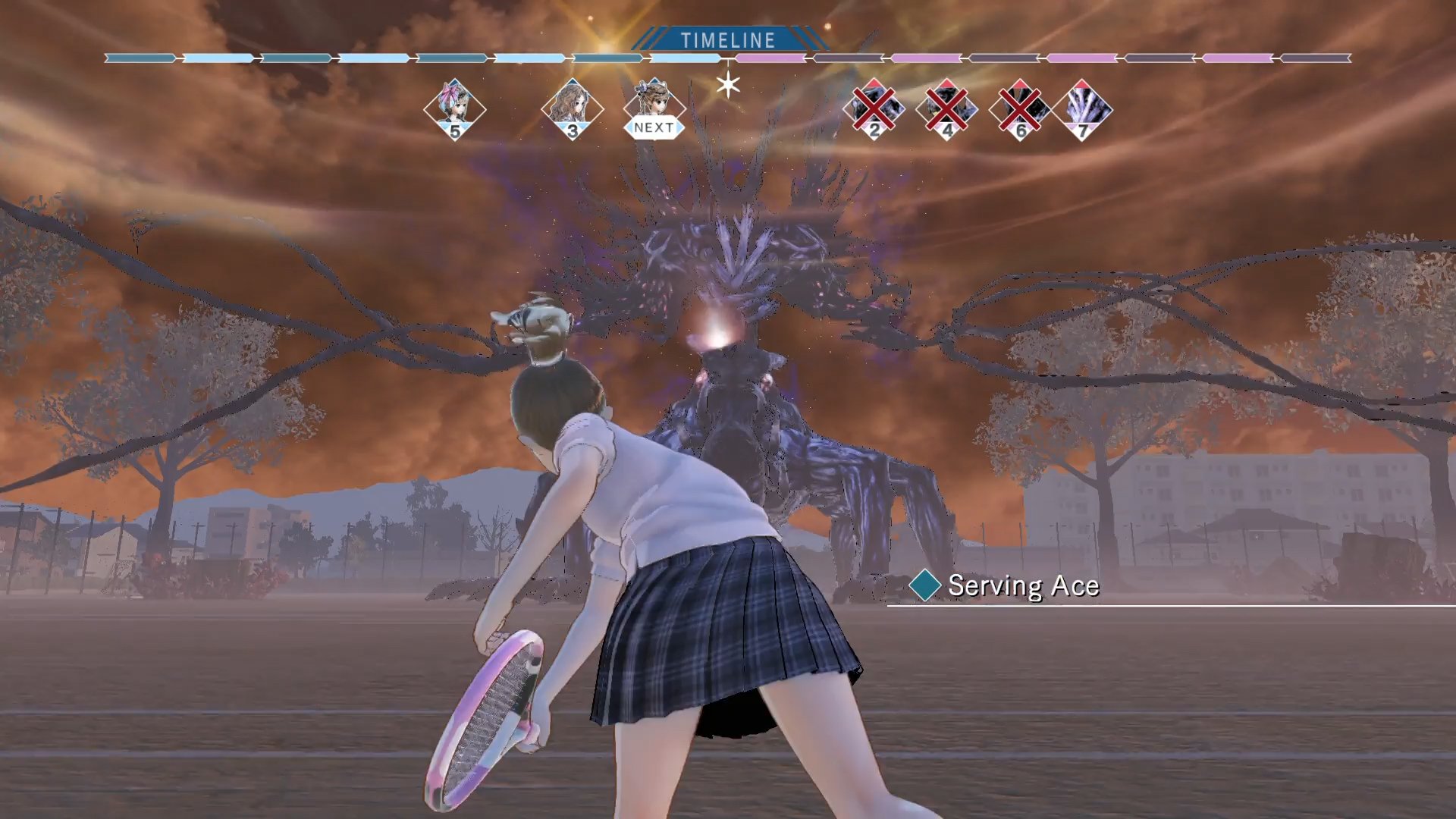 The appeal of Blue Reflection is similar to the appeal of idol groups. The music isn’t very good, but a lot of people just like to oogle at the girls because they’re extremely cute, and sometimes that pours over a little into semi-softcore fan service. Gameplay and story aren’t the reasons anyone will play Blue Reflection, rather it’s those who are enthralled by the cuteness of young Japanese girls and the day-to-day slice-of-life experience.

Even that though isn’t the most in-depth, as there’s not a ton of interaction or options to enjoy the daily life of a teenage girl. Perhaps if there were fewer characters they or the life simulation gameplay could be fleshed out a bit more. There is no schoolwork to be done, despite a study option, no dialogue options, no city to explore, and not many hangout activities. The school is decently sized, but small considered it’s the only location in the real world, and the only thing to do in is talk to girls for the next mission so you might as well transport to the room to skip Hinako’s slow run.

Obviously the shooter or sports crowd won’t play this; it’s aimed for a certain niche. For those people, no aspect of Blue Reflection is at all bad, but I just get the feeling that rather than focus on fleshing out a few things, they tried to incorporate too many that all ended up quite shallow. Nothing here will anger or upset you, but nothing will amaze or move you either. It’s a steady, repetitive line to the end without any sort of escalation, but not everything need to be full of crazy turns and ups and downs.