Even if Konami has firmly planted itself on the sidelines, it’s a darn good time to be a vampire hunter.

Modern Castlevania fans have the IGA-led Bloodstained: Ritual of the Night, and classic Castlevania fans have the 8-bit-style Bloodstained: Curse of the Moon. They’re both great for different reasons. The former is a satisfying level-grinding power fantasy across a sprawling, secret-filled map. The latter is a single-sitting action-platformer that would’ve been an ideal rental back in the late ’80s or early ’90s.

If you’ve only played one but not the other, you should reconsider. And if you’re wondering how much more mileage Inti Creates could possibly get out of its Castlevania III tribute, I have great news.

Bloodstained: Curse of the Moon 2 isn’t the kind of modernized retro game you’ll tear through once or twice only for it to slip out of sight and out of mind, never to be touched again. Over the weekend, I happily cleared the sequel four times – twice alone, twice in local co-op – and it’s still calling my name. 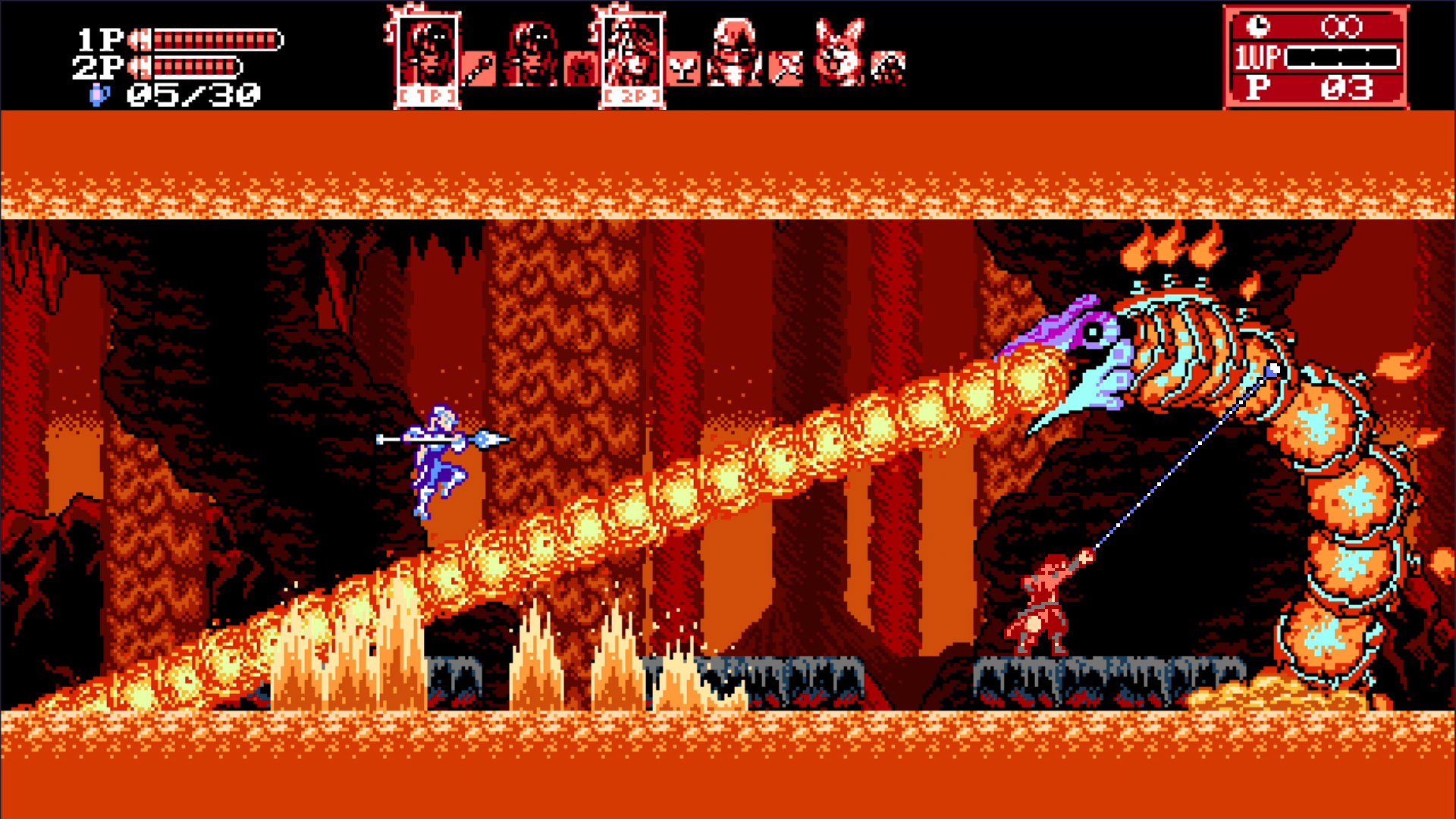 If Curse of the Moon only starred its sword-slashing lead protagonist Zangetsu, it would still be pretty good, but not nearly as memorable or fun. The first game’s character-swapping conceit is back for round two, and not only does the original roster return, there are three new playable characters.

Between the spear-stabbing Dominique, the bomb-chuckin’ sniper Robert, and Hachi – a dog in a mech that can stomp on spikes, hover in place, and temporarily go invincible – there’s a character for every playstyle. Everyone has an individual life bar, but they share a common mana-like resource for special attacks. As long as you smash every candle in sight, you’ll stay topped up. You know the score.

Like the last game, you’ll cut down demons in eight densely-packed levels, picking up recruits (and permanent upgrades to your health and energy reserves) along the way to each boss battle. The world-map progression is linear, but the levels are layered with alternate routes, character-specific shortcuts, and secrets. In terms of sequel refinements, the checkpoints are more considerate and clear, the bosses are more elaborate (and they have health bars), and the multi-playthrough payoff is much stronger.

As I alluded, replayability is a huge priority for Curse of the Moon 2. You’ll have access to different characters on each of the four main playthroughs (the last of which has a pair of exciting bonus stages), so if you’re worried you missed Miriam, Alfred, and Gebel, don’t sweat it. They’ll show up in due time.

Inti Creates did a fantastic job of shaking things up across these story “episodes.” The broader content remains largely the same, but it doesn’t wear thin. At times, I felt totally overpowered (in a good way). Other times, I couldn’t rely on my old tricks to bypass powerful foes or circumvent nasty platforming gauntlets. I also gained a new appreciation for the level and boss designs every step of the way.

I can’t stress enough how big of a deal two-player support is in a game like this. It’s the best. It’s so well done here, I’m retroactively bummed Konami didn’t experiment more with co-op in Castlevania.

Bloodstained: Curse of the Moon 2‘s dated aesthetic might be initially off-putting to a co-op partner who doesn’t have any particular fondness for old-school gaming, but pass ’em a controller anyway – this game is streamlined and palatable enough that retro skeptics can come around and have a fun time.

Every single character – especially Dominique and Robert – has a time and a place. They’re all a blast to play as and freely swap between. (Just don’t overextend yourself and let anyone die, or they’re out for the rest of the level.) Figuring out who is best suited for each enemy, environmental hazard, or specific boss attack was a highlight. It’s surprising how much Curse of the Moon 2 encourages communication.

It’s worth mentioning that player two will have their own Zangetsu (an instant advantage over solo play), co-op is drop-in (don’t mind the “One Player” and “Two Player” prompts in the beginning), and there’s a New Super Mario Bros.-esque bubble mechanic if a player wants or needs to sit out for a bit.

If someone falls off a cliff or takes a few too many arrows to the head, that particular character will be wiped from the board, but as long as at least one player is standing, their teammate can quickly rejoin after a short delay and try to keep the fight going. What’s more, you won’t need to worry about running out of “continues,” and like in the original Curse of the Moon, there’s a handy “no knockback” option.

The potential for close-calls and last-second comebacks is extremely high. This is a lively co-op game. 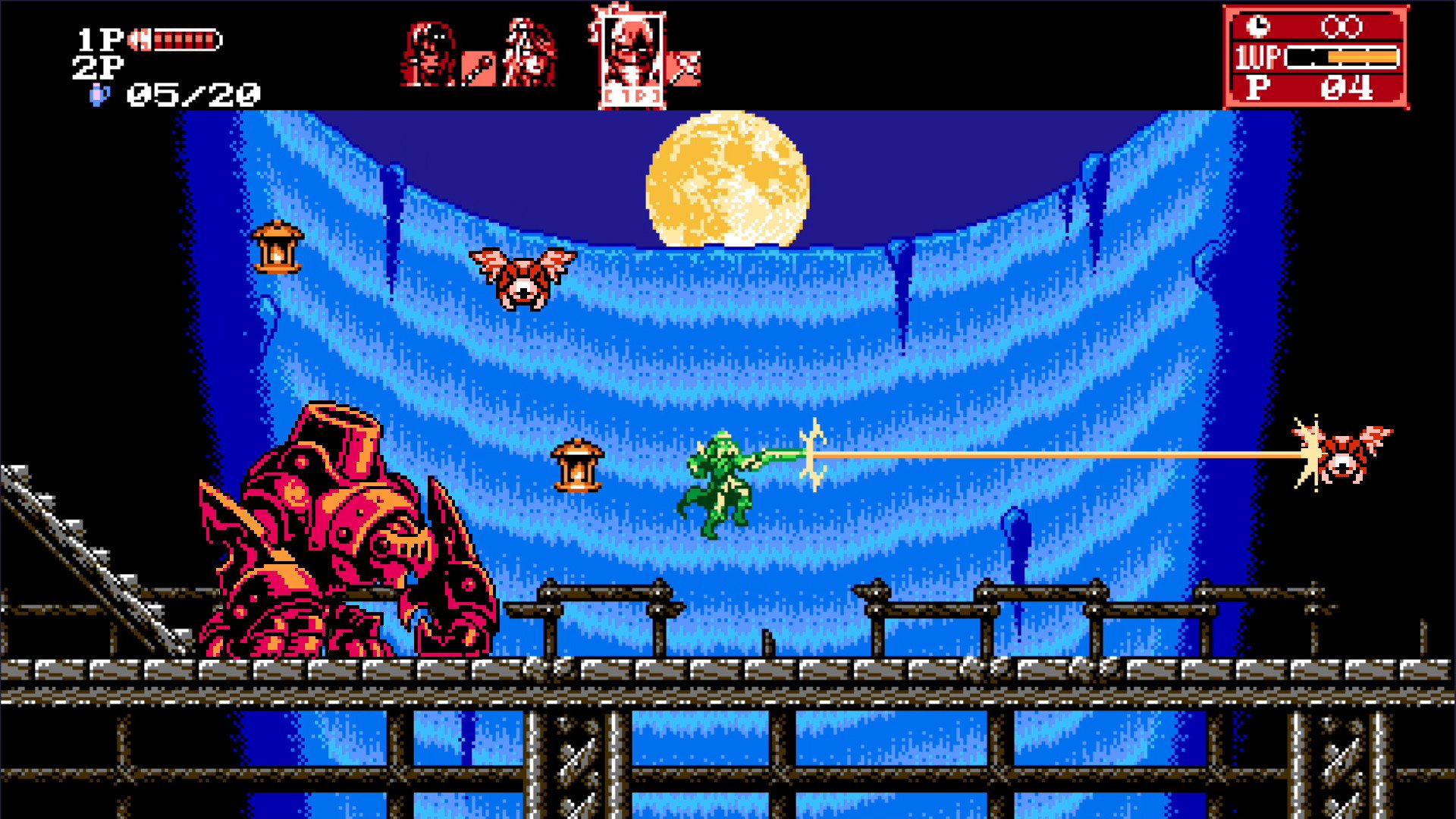 I can think of one platforming-heavy screen (in the lava level) and one boss (with a chaotic attack pattern) that were a little too pesky for their own good, but otherwise, I enjoyed almost every minute.

Bloodstained: Curse of the Moon 2 can take an hour or two to beat depending on which playthrough you’re doing and which paths you take through the levels. Altogether, I’ve spent something like eight hours in this game, and there’s still (at least) one secret I still need to unlock on the menu. I’m hooked.

Inti Creates could’ve done “more of the same” and called it a day, but the new characters lend Curse of the Moon 2 a ton of flexibility, the co-op support is commendable, and the subtle refinements can be found far and wide if you go back to play the original game after spending a weekend with the sequel.

Curse of the Moon isn’t just some quaint offshoot of Bloodstained. It’s leading the charge.