Your suffering will be legendary

Blasphemous might be 2019’s gnarliest video game. Its odds are certainly up there.

Drawing direct inspiration from the usual suspects like Dark Souls and Castlevania – the series, I mean, not just Symphony of the Night – Blasphemous crafts a bleak world dominated by a sinister, all-encompassing religious fervor. Themes of sinners, saints, and sorrow touch every facet of this game, from iconography and prose to enemy designs and set-pieces to characters and their grim tales.

Instead of resting at a bonfire, you’ll seek respite at life-generating prayer desks. Rather than cast magical spells, you’ll wield powerful “prayers.” Ability-boosting items are affixed to a rosary. The list goes on and on, endlessly. It’s not every day we see a video game just go for it like this, and while Blasphemous doesn’t nail the landing across the board, it’s one seriously enthralling metroidvania. 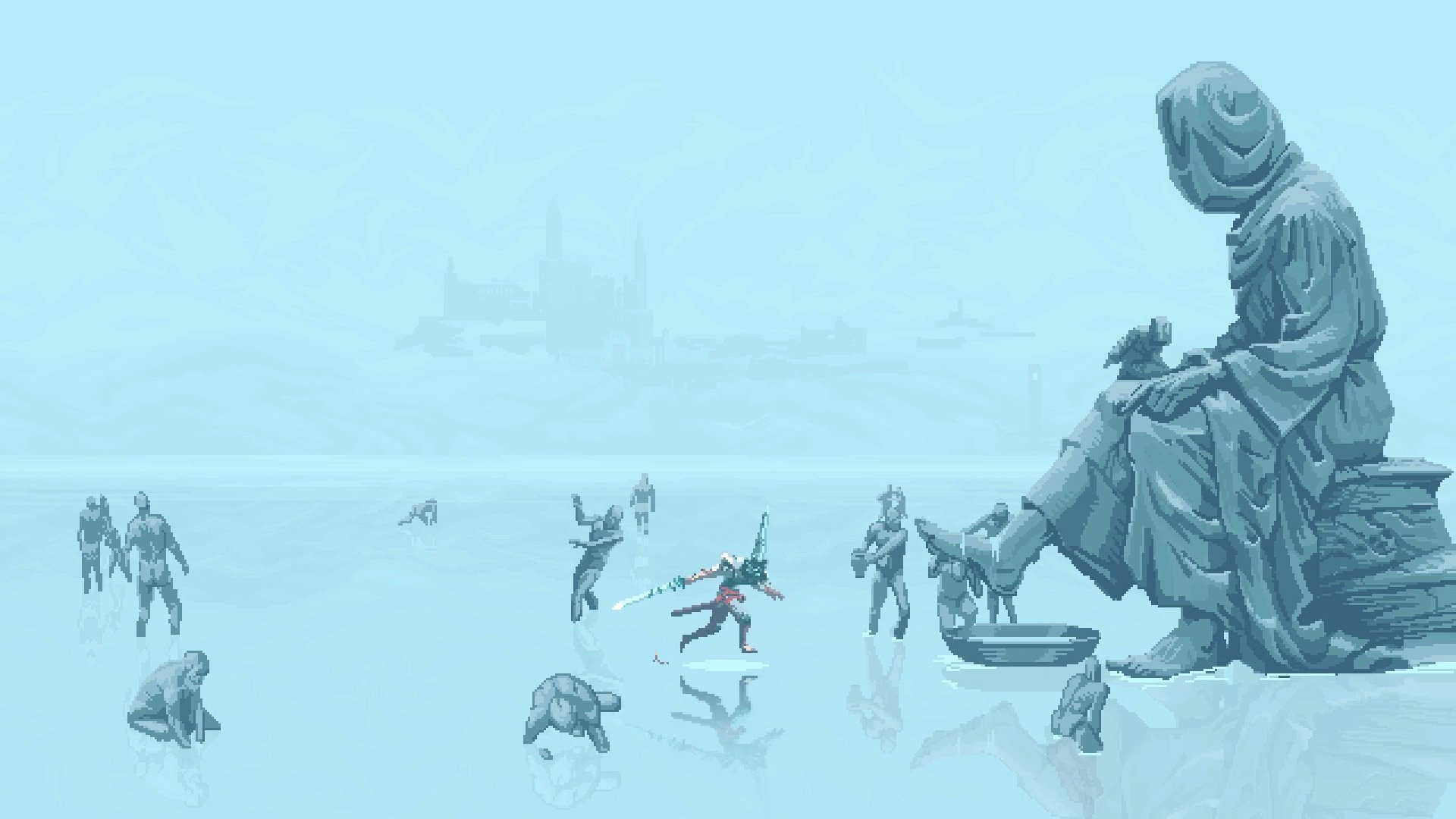 I really mean it! These last few years have been generous to ‘vania fans. A ton of promising games have tried to make a name for themselves, and while some rank alongside the best of ’em, others fell way below lofty expectations. Blasphemous won’t go down as an instant classic, but know this: it’s great.

With that preface out of the way, what is this game, exactly? It’s not an attempt at 2D Souls, despite what you might be thinking. You aren’t going to be grinding for XP or keeping a watchful eye on a stamina meter. In a lot of ways, Blasphemous is a traditional action-platformer; it just so happens to borrow elements like tying enemy respawns to resting and drenching item descriptions in lore.

Playing as The Penitent One, a silent sword-wielding masked warrior, you’re on a singular mission to incite change in a cursed, guilt-ridden land. That I can say for certain. Otherwise, post-credits, I’m still working things out. The narrative requires piecing together disparate clues and reading between the lines. If you can’t be bothered, that’s fine. You’ll find value in the lavish world-building and double-take-worthy cutscenes – enough to get you from Point A to B to Z and back up to A for an overlooked item.

Cvstodia is a sprawling non-linear setting, the kind you won’t mind combing through again and again in search of (largely optional) collectibles. You’ll encounter more than a few dead ends in the opening hours as you find the first three bosses necessary for bypassing an early roadblock, but for the most part, Blasphemous does a good job of letting you loose while still subtly funneling you along.

Completionists will have a hell of a time scrounging for everything, though – there’s a ton of stuff to uncover, some of which is practical, and some of which is basically filler meant to flesh out the background and set the mood. I’m missing several pesky cherubs and lore-filled bones, much to my chagrin, but the actual critical-path story-progressing items never gave me any real trouble.

I struggled the most with the tricky platforming bits, all things considered. Whereas hand-to-hand combat has a satisfying if basic learning curve (tip: make smart use of the sliding dodge maneuver and unlock the lunging strike as soon as possible), circumventing insta-kill spike traps never seemed to get much easier for me. When you aren’t slicing apart tormented souls in Blasphemous, you’re scaling walls with your sword, leaping between disintegrating platforms, and grasping precarious ledges.

The ease with which you can be knocked around and unceremoniously plummet to your doom began to grate on me, particularly when my last prie-dieu (respawn point) was dozens of rooms back. Certain foes also have a tendency of combo-ing The Penitent One into submission. It’s not the best feeling. 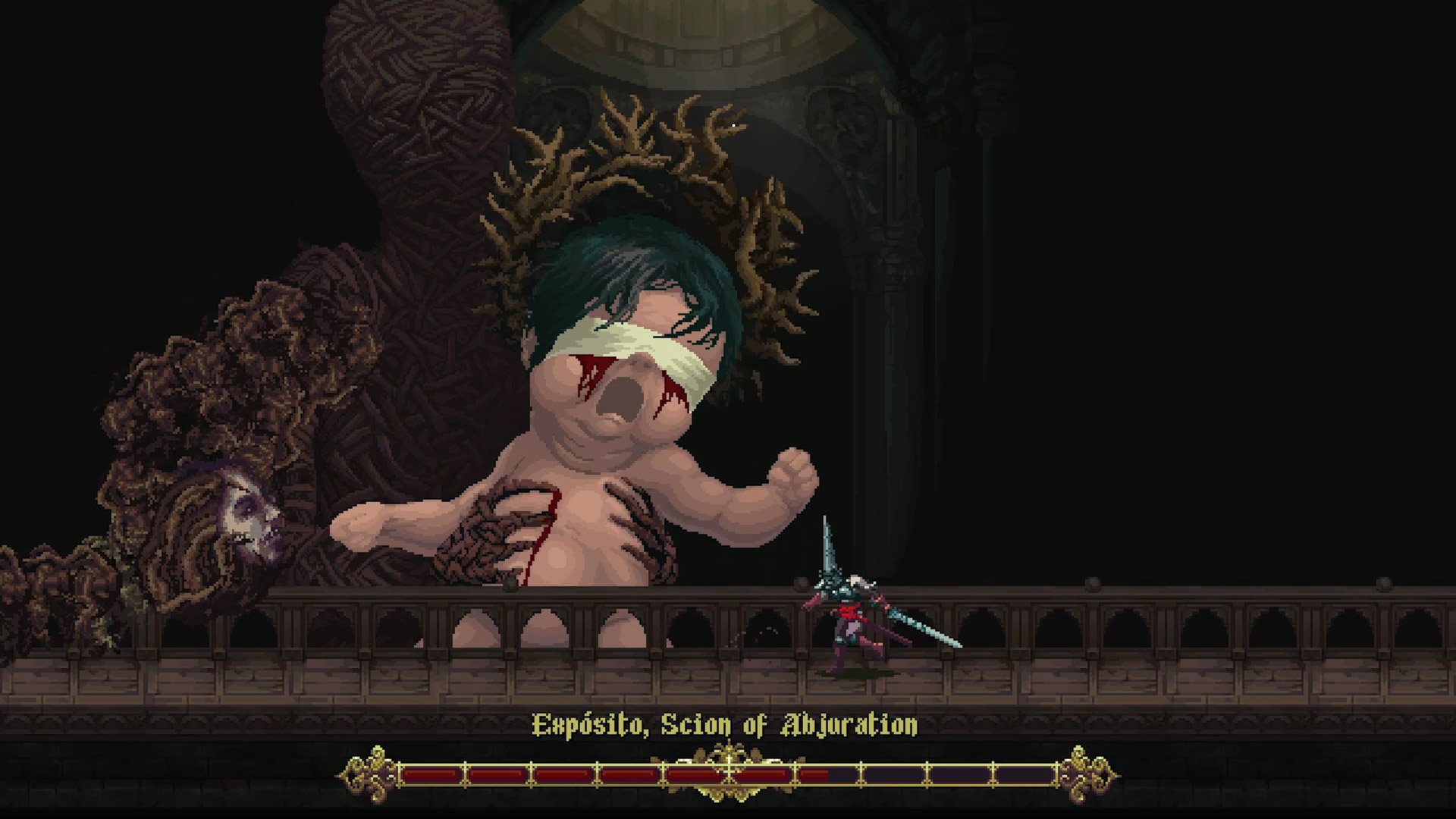 To even the odds a bit, you can search for special rooms that serve as permanent upgrades to your health and mana reserves. Rest assured, you can also earn additional healing flasks. There isn’t much else in the way of player progression, though. You can accumulate minor buffs with items on your rosary and unlock a handful of attack upgrades on a short skill tree, but nothing crazy. Whether you’re a few minutes in or your save file is pushing fifteen hours, combat doesn’t evolve in a meaningful way. On the flip side, it never seems to get old. I dig it – I just would’ve liked more options at my disposal.

I came into Blasphemous expecting the bosses to be the big swear-inducing hurdle – and admittedly, some of them are no joke – but they are by no means grueling. You’ll need to learn their tells to reliably predict incoming moves, sure, but there’s plenty of margin for error. Their grotesque designs are a high point. One late-game fight in particular demands a mastery of parrying, and I’m still buzzing from it.

On that note, I can’t get Blasphemous off my mind. I may never fully grasp the opaque story even with the inevitable community-led theories and explainers lending a hand, but that’s okay. Even taken as a fanatical fever-dream, this game delivers. Some aspects aren’t as fine-tuned or ambitious as they could’ve been, leading to unevenness, but there’s so much for metroidvania fans to latch onto here.

In the meantime, I’ll be running laps in hopes of hitting that coveted 100% completion rate.