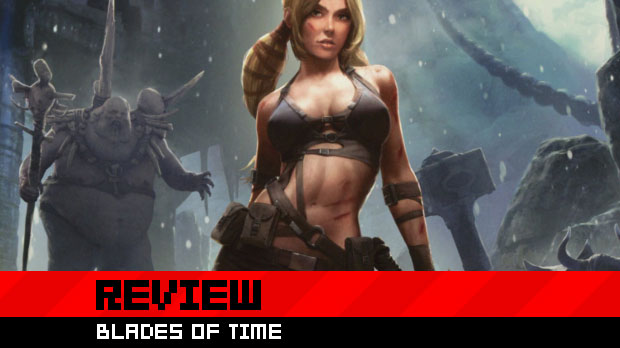 You’ve got to give Gaijin Entertainment some credit. The Russian studio has no reputation for creating good games, and 2009’s X-Blades was particularly mediocre. Despite this, Gaijin just keeps on plugging and is even prepared to revisit its prior failures, giving the world a spiritual successor to X-Blades in the form of Blades of Time.

It’s amazing how much faith Gaijin has in the series’ barely clothed heroine, Ayumi, because Konami certainly has none. Taking over the publishing duties from Southpeak, Konami has famously refused to put any effort into promoting the game. It announced a release date a week before launch, and the game itself missed that date in most areas by roughly three days.

Let’s face facts. Blades of Time is far from a masterpiece. It struggles to be good at all, in fact. Nevertheless, one can’t help but feel sorry for it, and at least feel a little charmed by its noble attempts to be taken seriously. 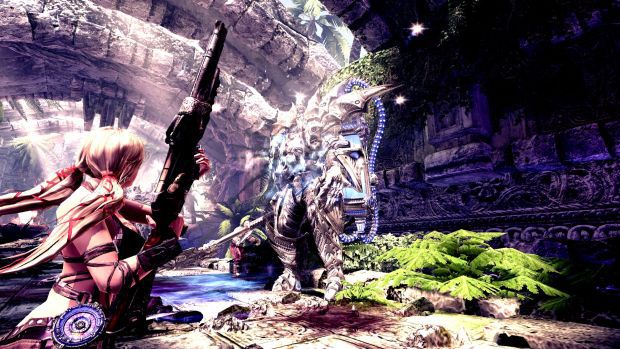 Famous treasure hunter Ayumi, having traded in her thong for some hotpants and her American accent for a British one, is doing some things in a place when something happens, before she gets transported to a place called Dragon Land for some reason. Once there, she has to do some other things to something before something else happens. In case you haven’t guessed it, the plot is about as detailed as it is sensible. I still can’t quite work out why Ayumi thought the bad guy was a good guy when he was established as her enemy at the very beginning of the game. Perhaps I’m not supposed to understand.

The ludicrous story might make no sense but at least it’s the first clue that Gaijin is actually trying to make a real videogame this time. While X-Blades was merely a set of vapid arenas with no sense of cohesion, Blades of Time attempts a sense of pacing, with fully designed levels through which the narrative weaves. Such a concept is rudimentary stuff for most videogames, but given Gaijin’s prior efforts, it’s a dramatic step forward for the series. It feels like more than a series of amateur third-person Unreal mods, which is a nice improvement.

Blades of Time‘s combat system is of the stereotypical hack n’ slash variety, with Ayumi dodging, blocking, and button mashing her way through most battles. Simply hammering the attack button will see our outgoing protagonist whirl about at a dizzying pace, while more damaging magical attacks are unlocked throughout the game, performed via simple two-button combos. With a click of the right stick, Ayumi can switch to projectile mode, starting with a rifle and upgrading to a machine gun, which can take down flying opponents and thin the ranks of oncoming monsters before they reach melee range. Finally, there’s a lock-on system which allows players to dash straight to an opponent. If it happens to be a flying creature, Ayumi will cling on and attack for a limited while — a cool idea, though poorly implemented as Ayumi will undefended damage while dashing, and many aerial creatures are positioned over deceptive death drops.

The action is adequate for some shallow hacking fun, but it does suffer from an inelegance that makes the game much harder than it has to be. Ayumi is absolutely terrible at defending. Her blocks are inefficient, she can take damage while dodging, and the enemies are not only numerous, but capable of fighting through the player’s combos. Even the most common opponents can chew obscene amounts out of Ayumi’s health bar and she has absolutely zero defense against ranged attackers, of which there are tons. It’s an outmoded approach to challenge, where difficulty is determined simply by how lucky the player is to survive a ton of garbage thrown his or her way, rather than actual skill. Expect to use the regenerating heal command plenty of times, and don’t forget to exploit the pathetic enemy A.I. by standing in any available doorways. Monsters can’t seem to understand that approach, and will often harmlessly attempt to trudge through walls while you shoot them to bits.

Blades of Time creates an artificial challenge through overwhelming assault, but players aren’t completely helpless. Early in the game, Ayumi obtains a “rewind” ability, allowing her to turn back time. Once time is reversed, a clone of Ayumi will appear and recreate her past actions, while the player is free to do something else. This can be done multiple times to create a small army of clones, all doing whatever the player did before their last rewind. You can use clones to distract enemies, tackle multiple foes at once, or simply deal huge amounts of damage to a single target. By far my favorite use of the power is to create copies of Ayumi firing her machine gun at an incoming crowd of monsters, thereby creating a wall of bullets that decimates a force before it can even get near.

There are some puzzles that make use of the rewind ability, but they’re all fairly simple and repeated far too many times. They mostly consist of cloning Ayumi to stand on various pressure pads to keep doors open or activate platforms. There is one rather cool boss fight in which players must trap a creature in a QTE sequence, rewind the event, and then destroy the regenerating health tank on its back while it’s defenseless. It’s a neat idea, and highlights the potential of the rewind ability, but it’s never developed beyond that one circumstance. The boss later becomes a regular enemy, and further uses of time travel consist solely of pressure puzzles or spamming the power to make fights more fair. 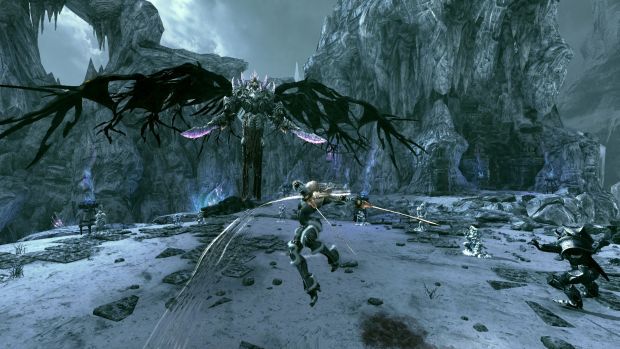 Some of the puzzles, while still simple in concept, can be a bit more intricate. However, they’d all be very easy if the game was ever good at telling the player what it wants. Ayumi is followed by a fiery woman who dispenses advice on how to approach certain challenges, but she’s so dismissively vague that it’s sometimes difficult to work out exactly what the game expects of the player. One of her clues to a puzzle that’s stumped a lot of players is — and I’m not joking — “Try sorting it out.” That is how the game advises the player to approach a puzzle with a concept never seen in the game before or after. Just try sorting it out. The trouble is, once players do work it out, it’s always insultingly easy. It’s almost as if the in-game advice is purposefully designed to throw players off the scent and trick them into thinking a puzzle’s more complex than it is, just to keep them there longer.

One other thing I find disagreeable is the lack of fluidity to Ayumi’s movements. Every time she stops attacking, whenever she jumps, and following each dodge, Ayumi has to stop and transition into regular movement. I find it quite irritating when games insist on this kind of stuttered shift between attacking and walking, and it’s especially noticeable in this case and I felt I had to make mention of it somewhere.

Although severely irritating at regularly intervals, there’s still a perverse amount of fun to be had with Blades of Time. When luck is on the player’s side, battles can be surprisingly engaging and entertaining, especially when the clones behave as intended and humiliate the enemy forces. It doesn’t always work that way, as the enemies aren’t shy of changing their actions after they’ve stopped rewinding, but the frustration can be worth it for those times when it works. The campaign, clocking in at your average six-to-eight hours, is pretty good at providing some disposable merriment, and there are some neat hidden treasure items to unlock that boost Ayumi’s skills. At the very least, it’s nice to see that Gaijin really did try this time. 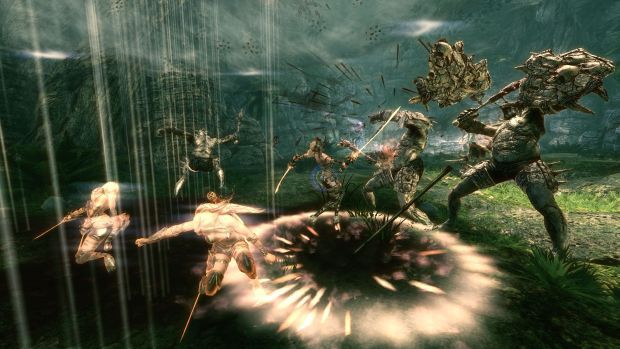 Amazingly, Blades of Time sports a multiplayer mode, which can be played either competitively or cooperatively. Conquest mode is a series of battles between two sides, in which players must defend a series of pillars from attack, while destroying the pillars of the opposition. The game is won when all the pillars, and the team’s magical tree, are eliminated. The mode can be played solo, which is a good thing given the fact that literally nobody is online. It’s almost adorable how hard Gaijin tried, though. There’s a leveling system, multiple characters and unlockable costumes. Conquest really tries to be a fully realized online complement to the package, but all that effort has gone thoroughly to waste.

As you may expect, this isn’t the prettiest game on the market. Graphics are simplistic, but colorful, and there’s some nice designs in both the creatures and environments. The voice acting is universally dreadful, and some of the characters responsible for the most exposition have distorting vocal effects piled onto their speech, making them almost impossible to understand. At the end of the day, it’s a budget game, and you get what you expect. 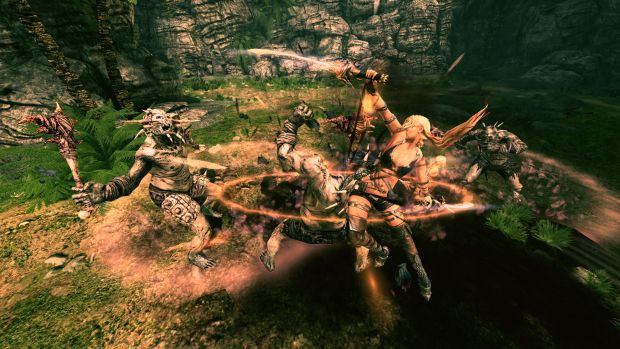 Blades of Time isn’t a very good game. It’s sloppy, cheap, and the one central gimmick is exploited to weary degrees. Nevertheless, it still carries itself with a sense of sincerity that I find utterly charming, and its simplistic combat system is perfectly capable of providing some basic thrills. While I wouldn’t recommend a purchase even at its budget price, I’d say hack n’ slash fans would do well to rent it for a weekend’s pleasure. It might even be worth keeping if you can find a price closer to twenty dollars than forty. You won’t fall in love with the thing, but once you’ve beaten it, you’ll at least be able say, “Yeah … that wasn’t awful. Sometimes it was pretty neat.”