When I first played Bit.Trip BEAT, I had no expectations. The game ended up being one of my favorites of 2009. From there, my expectations for the series were set high, and thankfully, those expectations were always met. I definitely have my favorites among the games that followed BEAT (CORE and RUNNER), but each game in the Bit.Trip series is unquestionably inventive and well-crafted.

So when we come to FLUX, what are we supposed to expect? Inventive and well-crafted again, right? Well, for some, those expectations are not going to be met — at least, not at first. On the surface, FLUX appears to be exactly like BEAT, except with the screen orientation flipped. That technically makes it the least inventive game in the series. Artistically, though, nothing could be further from the truth.

Even more than any other Bit.Trip game, or most games of this console generation, Bit.Trip FLUX is a work of expressive game design genius. 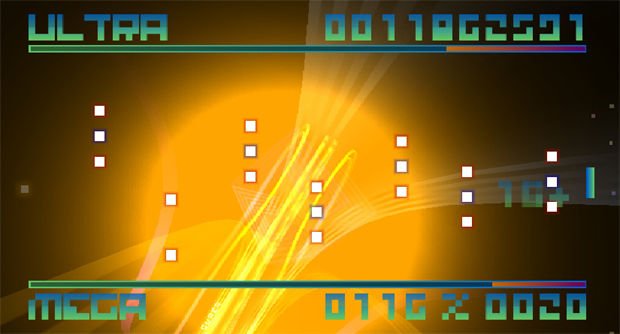 Like I was saying, for some, FLUX won’t live up to initial expectations. We Bit.Trip fans have been spoiled by a reinvention with every new game in the series. It’s fair for fans of the franchise to be a little let down to see that for the first time, the Bit.Trip series has gone back to a previously introduced gameplay mechanic. Once fans get over their expectations, they are in store for what might be the best Bit.Trip game yet. As for those who have never played a Bit.Trip game, there’s no better place to start than FLUX.

Before I get carried away about all that, let me say a little about the Bit.Trip series in general, and Bit.Trip FLUX in particular. The series as a whole marries minimalistic aesthetics and simple, intuitive controls with the polygon-based graphics of modern hardware to deliver a rhythm-action package unlike anything else going on in gaming today. The series is a love letter to both classic and modern gaming. Each title in the series draws inspiration from at least one retro — and one modern — videogame classic. FLUX is the first game to break away from that. Instead, it feels like an attempt to take everything that makes the Bit.Trip series unique and maximize those elements. 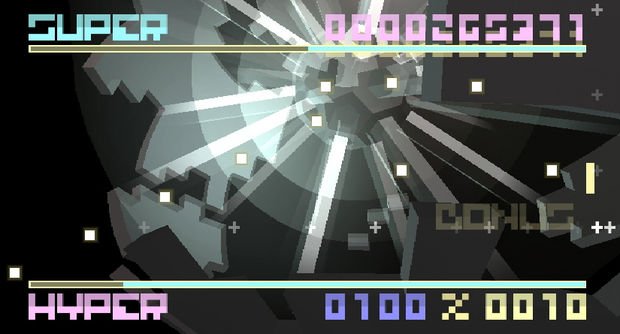 Each Bit.Trip game features its own unique song/level designs. Alex Neuse, the series’ creator and level designer, has a way of injecting his personality into his design in a way that could only be achieved by a true artist, and FLUX features some of his most expressive designs yet. Part of that comes from the fact that FLUX utilizes aspects from all prior Bit.Trip games. It stands to reason that with a more broad palette, the artist has the potential to paint a more descriptive, evocative picture. That’s what we get in Bit.Trip FLUX.

The stuff that Neuse manages to do with a relatively small tool set is just amazing. All the game ever does is send objects from the left side of the screen to the right side of the screen, and ask the player to either dodge them or hit them with their paddle. You’d think it would be impossible for a game with such a simple design to alternately make you laugh and cry, feel attacked or rescued, or make you just want to stand back and soak in the glorious, beautiful wonder of it all, but that’s exactly what Bit.Trip FLUX does.

It’s hard to describe with words exactly how the language of game design manages to accomplish this. It’s something that really needs to be experienced to be understood. Rest assured, though — FLUX takes chances with its bullet design you just won’t see coming. 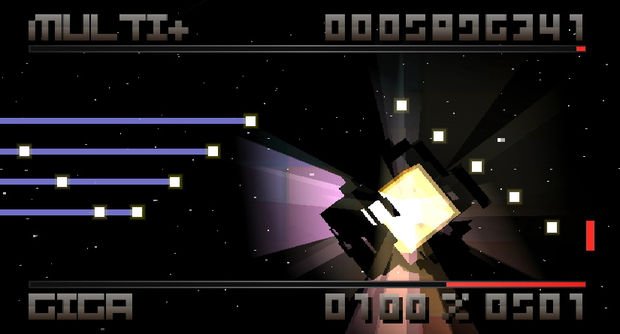 I’m still in awe of some of the stuff that goes on in level two, which is called “Perception.” The entire level is themed around teaching you to forget what you’re seeing on the screen, and instead, to trust what you believe. It’s really like nothing else I’ve ever experienced before in a game.

Part of what allows Alex to take level design further than he could in prior Bit.Trip games is FLUX‘s replay system. For the first time in the series, you get unlimited continues, in-level checkpoints, and a life meter. This means you can make a bunch of mistakes in a level and not die, and you can die without having to restart a level from the beginning. That makes FLUX the easiest game in the series to get through.

However, I’m not saying that it’s easy, exactly. I still died plenty of times when getting through FLUX. It’s just that with minimal forced replays, FLUX will pass by much more quickly. This also allows for Neuse to throw really, really hilariously cruel bullet patterns at the player. FLUX may technically be the easiest Bit.Trip game, but if you were to be a tough guy and force yourself to restart a level every time you died, it would be up there with the hardest. 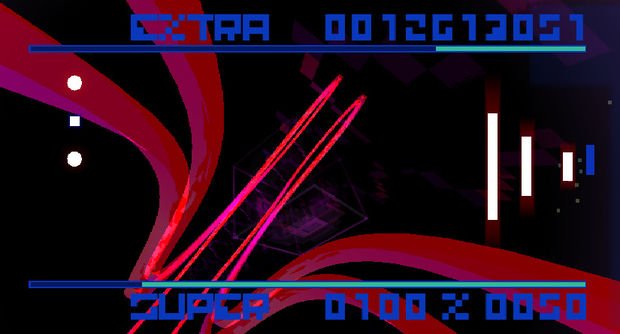 Part of the reason why the team at Gaijin Games decided to make FLUX easier is that they really wanted everyone to see the game through to the end. Actually, I’m not sure if the word “end” really describes what happens after you’ve played through all of the visible levels in FLUX. I don’t want to give it away, but needless to say, there is a lot of stuff going on in the subtext of FLUX, and much of it is nothing short of mind-blowing. I’m still in the process of trying to decode all the Morse and binary code that may or may not be in the game.

I’m also still trying to see everything that the game has to offer. You may be able to get through the levels in a few hours, but I think it will be a long time before anybody sees everything being offered. The better you play FLUX, the more levels of visual and auditory depth you peel into. For completionists and high score junkies like myself, the level of replay value here is tremendous.

I had to manually hit restart near the end of the game’s first stage seven separate times in order to eventually get a score high enough to send me to FLUX‘s final level of auditory and visual splendor (called META). Even then, I only managed to stay in META for a couple of minutes. It was like touching the hand of the God of High Scores just for a minute, then losing my grip. It’s hard to come that close to godliness once and then just walk away from it.

Even as I’m writing this, I’m tempted to play the game again to try to achieve a higher score and see something new. “Just try playing it one more time,” my mind whispers seductively. “Maybe you’ll see something amazing that you can write about in your review. It’s not procrastinating to play through FLUX again. It’s working; working for the good of the people.” 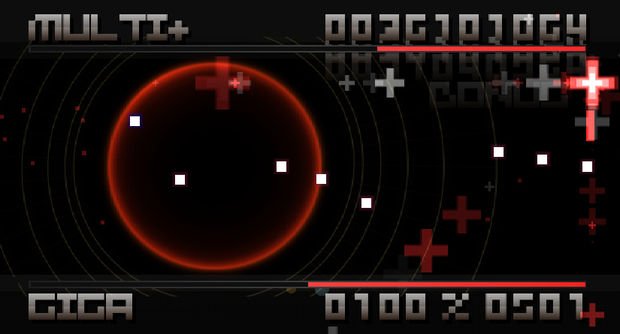 I see your point, mind, but I really have to finish this review. Then maybe later, I’ll do an addendum or something. Just let me finish this review first, please. If I start playing FLUX again, I may not be able to stop.

There are mountains of stuff I could say about FLUX, much of which I already covered in this preview from earlier in the year. Instead, I’m going to show some restraint, and wrap this up. Before I go, though, I should mention the few things about FLUX that are less than perfect. For one, the game only has two-player co-op, as opposed to BEAT‘s four-person co-op. It’s the one way that BEAT is inarguably better than FLUX.

I love introducing BEAT to new people — often times at fashionable parties — and part of that is because of the extended co-op. It really does a lot to suck in new people who otherwise tend to resist trying out new videogames. You just can’t do the same thing in FLUX, and that’s a bummer.

I’d imagine that’s because unlike BEAT, FLUX asks you to both hit and avoid various bullets. That means it would take a little more design ingenuity to make FLUX a four-player experience without making it too easy. Even still, I’m sure Gaijin could find a way to make it work. Other than this one small issue, and with some other aspects that I honestly don’t care about, but I’m sure some of you do — like the lack of online leaderboards, online multiplayer, and the option to turn off checkpoints — Bit.Trip FLUX is perfect.