Beyond Good & Evil is a game that needs no introduction, which provides a stiff challenge to anybody attempting to review it in 2011. One of the most respected videogames of all time, applauded for its rich characters, engaging plot, and varied gameplay, Michael Ancel’s opus also stands as one of gaming’s biggest tragedies — perhaps the poster-girl for games that sold well below their due.

With Beyond Good & Evil HD, this tragically undersold game gets a chance at redemption, and a fresh coat of paint. Oh, and it hasn’t stopped being quite, quite good. 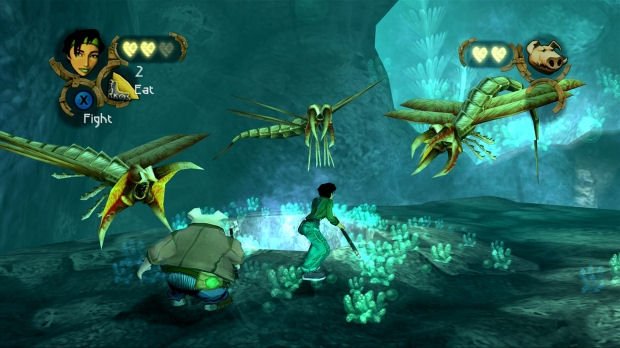 Beyond Good & Evil tells the story of Jade, a freelance photographer and protector of children who have been orphaned thanks to the DomZ. The DomZ are a brutal alien race who are currently invading the watery planet of Hillys, locked in a bitter struggle with humanity’s protectors, the Alpha Sections.

As the game’s name implies, however, things aren’t quite what they seem, and Jade — joined by her Uncle Pey’J and secret agent Double H — becomes embroiled in an intergalactic conspiracy and a struggle to root out the truth.

The game’s critically praised story still manages to hold up as a charming and evocative tale, although it is worth nothing that, in hindsight, the game was not perhaps the most brilliantly written of titles. The characters seem more flat and less endearing than before. Pey’j is especially more grating than I remember, with his unfunny lines and tendency to overdo the “dush garnit” accent. Likewise, the overall plot is a lot less subtle than it wishes it were. It tries to introduce shades of grey in a world where nobody can be trusted, but the good guys are very clearly good and the bad guys are very clearly bad. 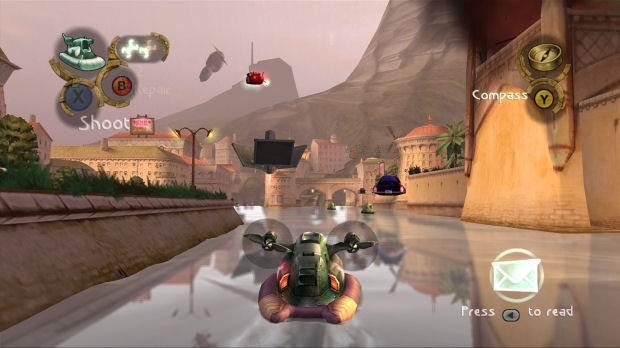 By no means is Beyond Good & Evil a poorly written game. The story may be more blatant than you recall, and the “emotional” scenes feel forced, but it still manages to be an engaging tale in a genuinely fascinating and unique world. Even eight years on, Hillys and its anthropomorphic inhabitants make for a game environment unlike any other.

At first, Beyond Good & Evil does not feel like it has aged well. The combat is a simplistic, one-button affair. The game’s environments are split into very small areas separated by loading screens. The very act of saving one’s game requires unnecessary animations and middle-man menus. However, the more the game opens up, the more the old magic returns. Puzzles are spot-on, if a little obtuse at times, and the combat still manages to be fun thanks to the special attacks of Pey’j and Double H, and the surprising depth of strategy that can occur during boss fights.

Despite doubts suffered during the game’s opening sequence, it took less than an hour for the memories to come flooding back, and for the game’s tight pacing, rewarding exploration, and engrossing atmosphere to take hold. Beyond Good & Evil is a game that clearly shows its age, but maintains its dignity, like Morgan Freeman. In short, if you have fond recollections of Beyond Good & Evil, playing once more will not destroy everything you hold dear.

There’s also a wealth of things to do. Not quite as much as I remember, but the various races, the animal photography, and the collection of hidden pearls provides enough distraction to keep easily bored gamers amused. The variety of optional content puts many modern games to shame. 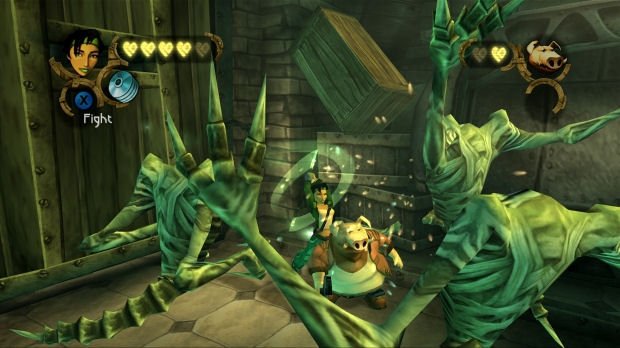 Beyond Good & Evil gets credit for still having the best chase scenes in videogame history. Both as the pursued and the pursuer, no game has quite yet topped the speed, action and downright thrill of Beyond Good & Evil‘s hot pursuits. It is amazing how tight and polished these moments remain, especially with the controls for Jade’s hovercraft feeling intuitive and enjoyable as ever. The optional Looter’s Cavern chases are absurdly fun and frenzied, and more than worth indulging in.

Of course, the main draw for this digital release is the visual overhaul, and it has to be said that Ubisoft did a terrific job. Taking into account the obvious limitations of the game’s original engine, Beyond Good & Evil HD is a relatively gorgeous-looking game. Once you step into the hovercraft and skate into the bright sunshine of Hillys, the rich colors and shimmering water effects create the illusion of discovering this game’s environments for the first time. Of course, the animations and textures are always going to be restricted due to the original code, but the game looks right at home among other XBLA titles. 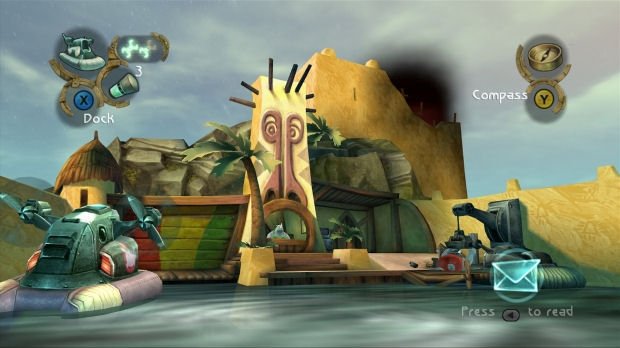 That said, there are a few issues. I did encounter a glitch during one early part of the game where Jade jumped through a platform and ended up in a black room with no exits. It wouldn’t have been so bad if it hadn’t cost me about twenty minutes of play-time. I also encountered at least one instance of the visuals and the sound falling out of sync. It’s more disturbing than you think to have Pey’j’s gruff, brutish voice coming out of Jade’s mouth. Fortunately, these issues are few and far between, as the majority of the game feels solidly produced. Just be warned that the occasional problem may rear its ugly head. Also, there is no option within the game to adjust the brightness, and some of the darker dungeons are very dark indeed.

Beyond Good & Evil HD boasts a terrific visual update, and despite a slow start, feels as good to play now as it did eight years ago. While not the narrative tour de force you may recall it being, the game manages to draw one in and keep the player involved with a charming game world and a strong, atypical female protagonist. If you played and adored it when it first released, there really is no excuse for you to not pick the game up. If you’re entirely new to the game, then it may be a harder sell, but all I can do is urge you to give it a chance. You might be pleasantly surprised.