Following a year characterized by increased public awareness of rampant police violence against citizens and the militarization of local law enforcement, a gun fetishist’s game riding a “cops versus criminals” tagline feels slimy.

Not unexpectedly, Hardline doesn’t want to interact with that discussion. Before you can even press a button, every time you load the game, you’re met with loud, fast cuts of the EA and Visceral logos, then an explosion. 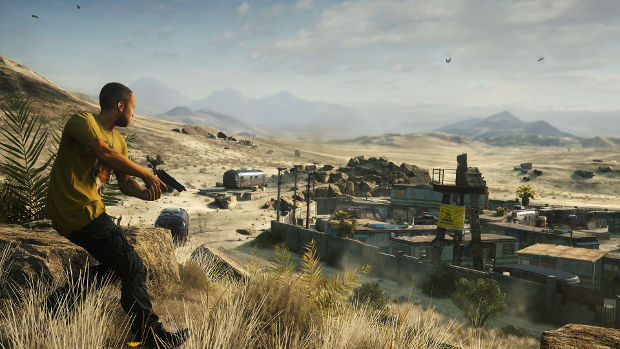 Hardline stars a young, honest detective named Nick Mendoza, a Cuban immigrant who grew up in a lower income area in Miami. Nick is drug police in a present day revival of ’80s Miami; that is, a sudden influx of drugs, namely cheap liquid cocaine called Hot Shot, and subsequent drug violence. Nick’s initial partner directly references the show Miami Vice and it feels like an excusatory retreat into nostalgia to hand wave away the shallow narrative.

It feels unnecessary and irresponsible to dredge up ’80s Miami so Hardline can bang on about the War on Drugs in an almost-non-present temporality, skirting contemporary issues. The structure of the game makes similar sleights of hand. Save for the first episode, which has Nick and his new partner Khai walking through colorful-character-filled projects, overhearing quaint bits of urban dialogue, there are few civilians in the game and you can’t interact with the one or two you come across.

That designation, “civilian” is an important one, though. When the trip through the projects turns into a stealth mission, suddenly the tutorial prompt is happy to tell you to, “toss a shell casing to separate a group of criminals.” Those “criminals” are a couple of people talking in front of their house. What makes them criminals? Being in the projects while Spanish music is playing? And why are police sneaking around clubbing people in the back of the head to do silent takedowns?

The characters acknowledge through dialogue that sneaking across private property isn’t legal, but they’re silent on the whole knocking civilians out bit. A bit later you make a rough arrest, which opens up a central mechanic: flashing your badge to freeze up to three criminals. From that point, you can go up and arrest enemies, shoving them to the ground with infinite handcuffs where they will stay with little sleeping “zzz’s” overhead despite staring at you with wide open eyes.

It’s nice that, despite being awake, they stay completely silent after being cuffed because Hardline is easiest played as a stealth game wherein you isolate targets, flash your badge, and make arrests without being seen. Especially because playing on Visceral-recommended Veteran difficulty (the highest available at the onset), combat has a higher chance of killing you with a shotgun blast while you’re reloading. Much better to wait in a corner, toss shell casings, and lure seven guards over one at a time.

Of course, this renders the detailed and specific weapon and weapon modification system moot, save for painting my guns with garish orange and blue camouflages out of amusement. You’re almost encouraged to make arrests rather than kill because arrests get you more points, but I also maxed out the progression tree less than halfway through. And all it yields is more gun and gun mod unlocks, which you don’t need if you’re not killing everyone. 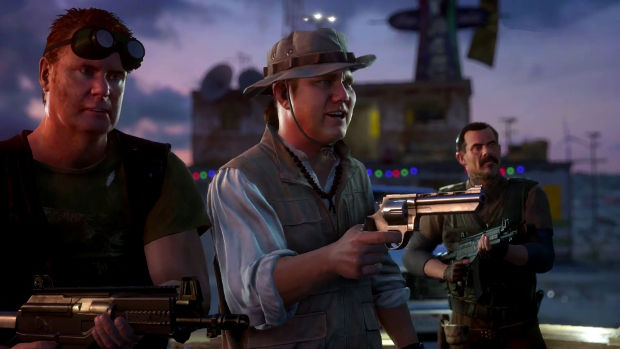 The whole system is a sort of confused attempt to facilitate the story, which is ripped straight from network television, the kind of one-season crime drama no one will ever remember. In fact, there’s a glib, Netflix-style overlay between the game’s “episodes,” down to the “Next episode will start in…” countdown pane. Plus, much of the voice and directing talent is actually pulled from US network television shows, yielding quality voice work that says nothing.

That’s why Hardline is so good at skirting specificity and modernity. It comes from people working to make the most accessible, non-alienating kind of bombastic fiction possible. This is why an obviously telegraphed triple cross turns it from boilerplate cop drama halfway through to something you’d see on FOX: prison breaks, revenge heisting, a trip to Hollywood, a racist redneck cult compound. At one point, it is so telegraphed that you’re going to be attacked by an alligator that I laughed so hard when it happened I failed the QTE.

While Hardline is tone deaf at times, mostly it is just deafening. Explosions and bombast are used not to distract from a troubling narrative as much as a stale one perfunctorily paced and reminiscent of network television emptiness.

[This review is based on a retail build of the game provided by the publisher. Destructoid did not attend the two day Hardline review event. Multiplayer was tested on Xbox One servers populated with EA Access members. Unlike the last Battlefield, it appears stable, albeit on one platform, prior to full launch.]