Enough time has passed for me to make a solid judgement on Batman: Arkham Knight. For the most part, I agree with the sentiments expressed in Steven’s review of the core game — Rocksteady tried too hard in many respects, and ended up coming up short. “Be the Bat[mobile]” would have been a more apt tagline.

With all that in mind, the prospect of a new add-on being released so soon — developed by WB Games Montreal no less — probably isn’t all that exciting. 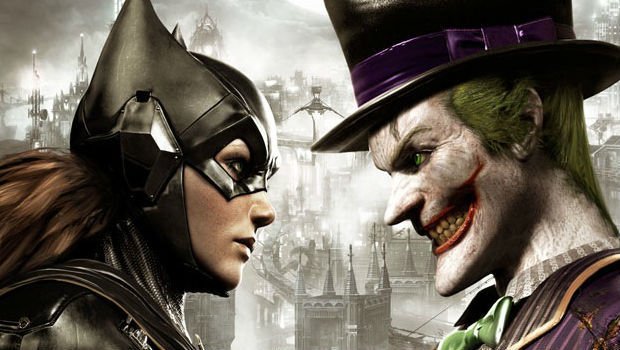 The Batmobile takes a backseat this time in favor of a tale told entirely from Barbara Gordon’s perspective before the events of Arkham Knight. WB just couldn’t resist the chance to bring The Joker back yet again, and it uses every opportunity to let you know that this is his DLC without really having him do all that much. In other more exciting news, Harley Quinn is back, but with her red and black Animated Series get-up for the first time in the Arkham games. It looks great.

All of the action takes place in the Seagate Amusement Park, which can be thought of as a tiny little sandbox that hosts the new DLC area. The Joker has captured Jim Gordon, and it’s up to Barbara (and Robin) to save the day. Family kicks things off with a by-the-book Dual Play combat session, then it’s off to free roam for Batgirl. For the most part (like all the other playable characters so far), Batgirl operates just like Batman — she even has identical detective vision. Combat is relatively the same, and even though WB Montreal notes that she’s “weaker” than Bruce, it doesn’t really feel that way at all. It’s very cool grappling about with Robin, but other than the use of a new type of gadget (advanced hacking), it’s the tried and true Arkham formula.

In Family, Barbara can use her remote hacking device as a “catch-all” basically, to do all sorts of things like short-circuit devices or manipulate objects. Think of it like a super gadget that can do a lot. It’s presumably done so you don’t have to micro-manage all of Bats’ tools all over again, and to give Batgirl a slightly different feel. Here’s the thing — it does work at a base level, mostly because it distills the experience down to a lot of the good bits, and takes away the pesky forced Batmobile sessions. In other ways it feels limited, as you’re stripped of most of those wonderful toys.

None of the environments are particularly memorable outside of a nice little cameo I found in a water tank (in fact, most zones are even less interesting than the random spots you’ll find in Gotham proper), but the linear format isn’t jarring, either. That’s mostly because of the fact that the DLC is so short. Normally that would be fine, but the story never really goes anywhere until the very end. Even then, it feels like a footnote rather than an impactful part of the overall narrative.

In terms of length, it’s meatier than the Harley DLC, but not by much. You can complete the main story in roughly an hour, and sort out all of the other collectibles in another 30 minutes. What I would have really loved to see is a full-roam option with Red Hood, Harley, and Batgirl (I mean, the models are already in the game with grappling and combat animations), but it’s not meant to be — the latter is still confined to her tiny add-on area. There are eight Achievements/Trophies though if you’re into that sort of thing.

Warner Bros. is really employing an odd strategy with Batman: Arkham Knight‘s post-launch content and the relatively expensive $40 Season Pass. All that’s been revealed so far beyond a bunch of throwaway content (skins, races) is a handful of bite-sized episodes such as this; it’s a far cry from the competent Cold, Cold Heart add-on for Arkham Origins last year. While A Matter of Family may be worth it for hardcore Batgirl fans, WB will have to do a lot better than this to justify the cost of the pass.