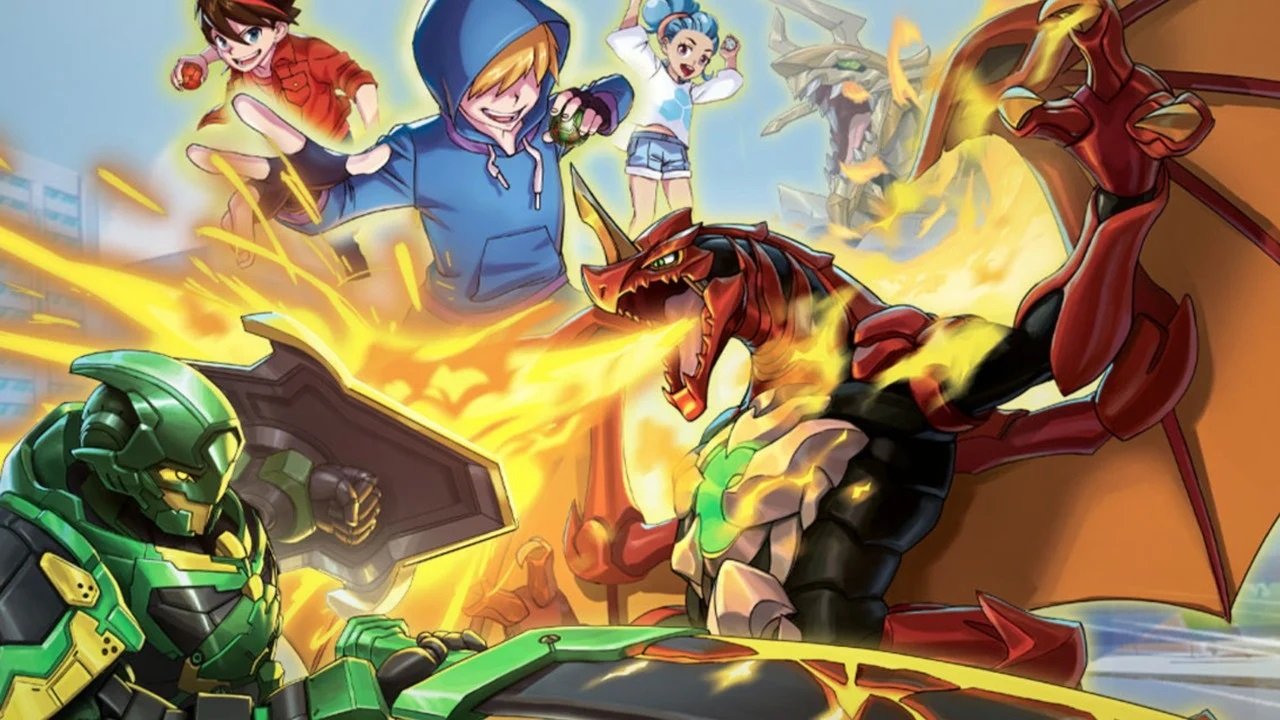 For this review, I went a little above and beyond. I did some training. Training with Bakugan toys: to really get into the vibe of this new Switch game.

Seriously! Ahead of the review period, the publisher sent me a box of Bakugan balls and an arena. How could I not try it?! My wife and I spent round after round battling it out together, chucking these things into a ring and comparing stats. I can see the appeal.

Unfortunately, the Switch iteration doesn’t quite capture most of the fun of the physical game. 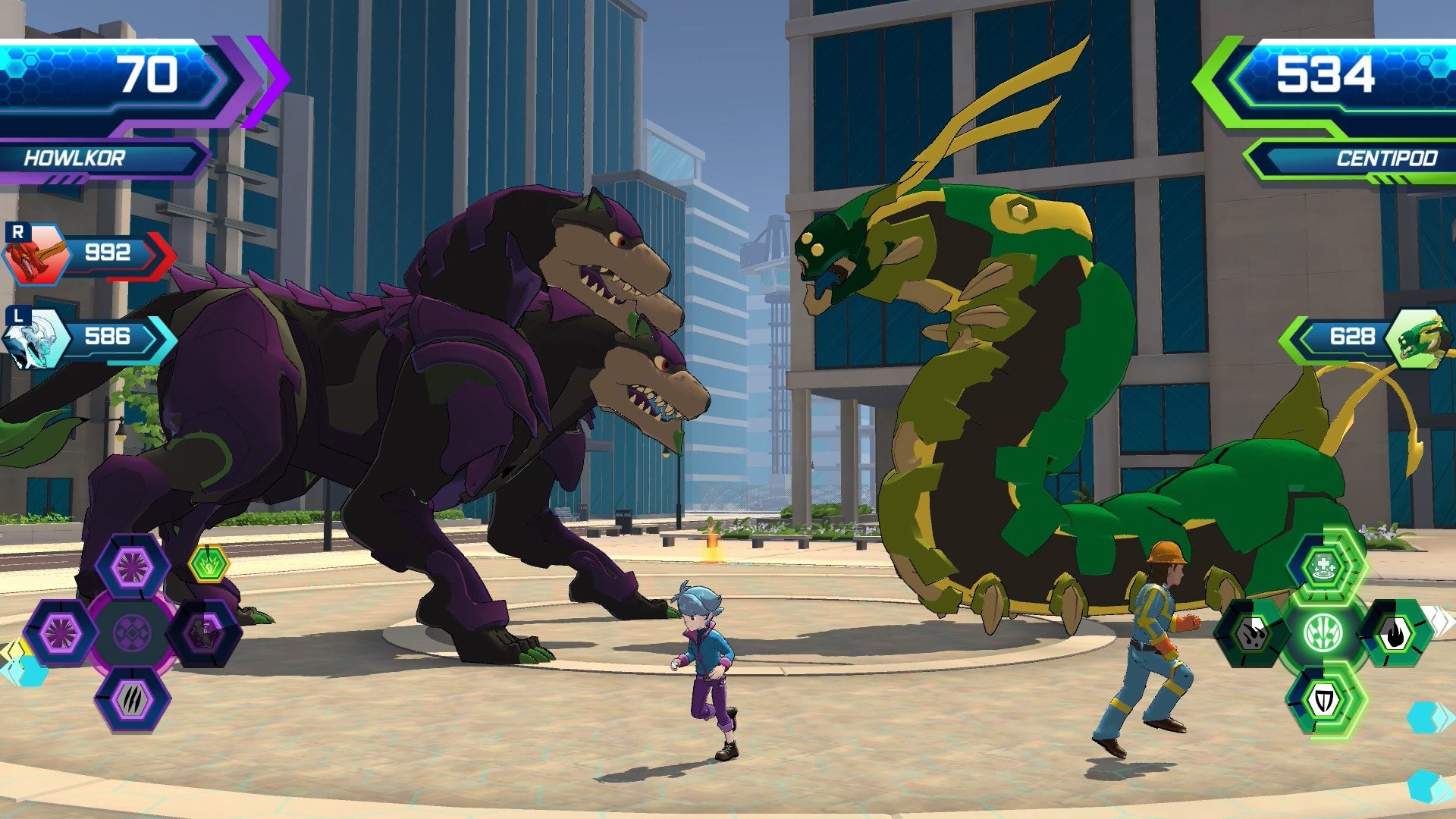 In real life, the aim is to roll Bakugan and best your opponent by either opening while their toy remains closed, or beat them via higher base stats for your chosen creature plus whatever modifiers you earn in the arena. There are multiple rulesets and variations, but that’s one of the most common ones. Various games have attempted to adapt this formula over the years, and Champions of Vestroia is the latest. I love that I get to talk about Bakugan in a review: this is a bucket-list moment.

It’s important to note that Champions of Vestroia, like many Bakugan works before it, is very much aimed at kids. All of the protagonists are kids (and much more child-like than say, Nate, of Yo-Kai Watch fame, or even Red/Ash in Pokemon). They all watch the popular platform “ViewTube” that tells them how cool Bakugan creatures are. I n this world, Bakugan kind of just…exist already and are part of society.

You know it’s just a normal kind of day: kids creating giant energy barriers to protect the environment from the devastation of huge kaiju fighting each other for sport. Vestroia is not a great introduction if you’re coming in cold, but for fans, it cuts right to the chase. Don’t ask too many questions about why Bakugan are legally able to brawl whenever they want. That’s just the way it is.

The setup is a lot like Yo-Kai Watch, one of my favorite new RPG worlds in recent years. And of course, the granddaddy of creature games: Pokemon. But this time you’re in the shoes of a custom protagonist, which doesn’t allow for a whole lot of leeway in terms of a personal journey. As a blank slate, you’ll acquire your first Bakugan in the first five minutes of the game, as you speed toward a very relaxed narrative amid a collective of sidequests.

It’s a very straightforward RPG. The San Barbaras Hub has a clear map, with annoying 10- to 15-second load times between zones. At first you’re going to be doing a lot of quests like helping your classmates turn in homework or picking up soccer balls on a field. It’s a bit aimless, but relaxed. You hang out with your friends and muse about Bakugan. That might actually be how you spend your Saturdays and this could be extremely relatable stuff here: I don’t judge.

To battle, you’ll walk around the arena as your avatar (next to giant hulking monsters) and grab flashing “Bakucores” on the ground while you boss your creature around. The idea is that you’re acquiring energy with these cores to boost your abilities and lighten their cooldowns, but as a twist, you can strategically try and steal them from your opponent. While some of the cannon-fodder battles are very rote as winning is an inevitability, the idea itself is sound as there’s some form of tactical nuance in controlling a human and a monster simultaneously. 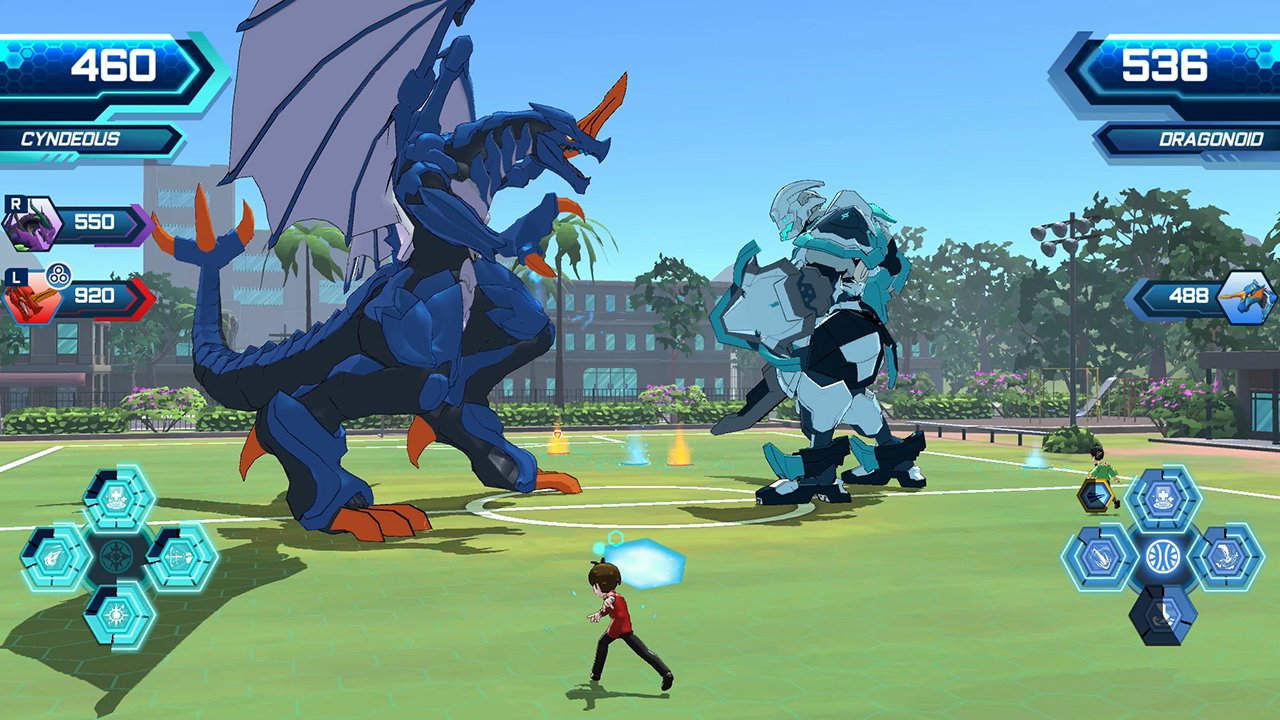 From there, you have to start delineating between the different types (elements) of Bakugan, which counter each other. You’ll also start customizing their abilities as you acquire more, with a variety of different concepts like healing, buffs, debuffs, straight damage, or piercing damage, which cuts through shields. You pick up new party members at a decent pace, so swapping them around and setting their loadouts is painless and fun.

The actual fights are kind of cool too. The creature animations in particular can look fairly detailed, adding to the vivid feel of combat and the sense of scale. But combat isn’t all that deep even as the game progresses. The “active time” style of play is still very slow, and the campaign doesn’t throw enough curveballs at you to warrant a drastic change-up in terms of how you approach battles. That said, there’s also an online battle component, but we weren’t able to cover it for this review (which we re-iterate below).

For all its shortcomings, I wouldn’t mind seeing WayForward get another crack at this series with a more concerted effort to bring in non-fans, with more depth. Bakugan is a world worth exploring. For now, you may want to stick with the physical game.

[This review is based on a retail build of the game provided by the publisher. It covers the single-player portion of the game.]