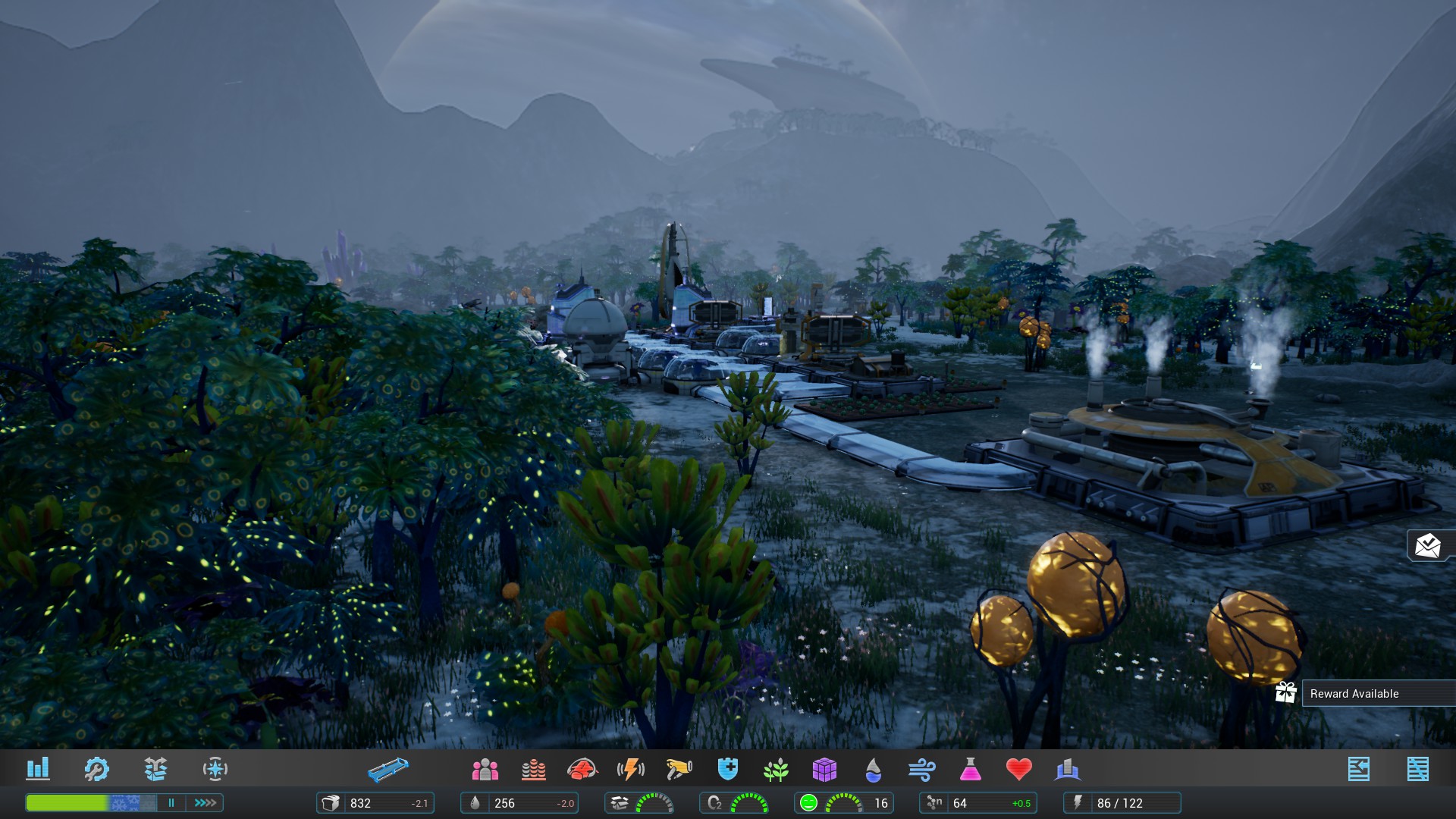 My people are starving.

You’d think, when settling a polar ice cap, Mission HQ would be sure to send you with more food. But nooo, “there is some arable land, you can farm for yourself. Oh, we seem to have dropped you way too far from any of it. Have we mentioned it’s an election year?”

Immigrants keep piling into my colony, despite the promises of boredom, toil, and famine. I’ve finally reached a patch of arable land – but I’ve run out of food. My approval rating drops from 90% to 30% in less than a minute of subjective god-time, and I am sent packing from the colony in shame on the next outbound shuttle.

Everyone else presumably starves to death. 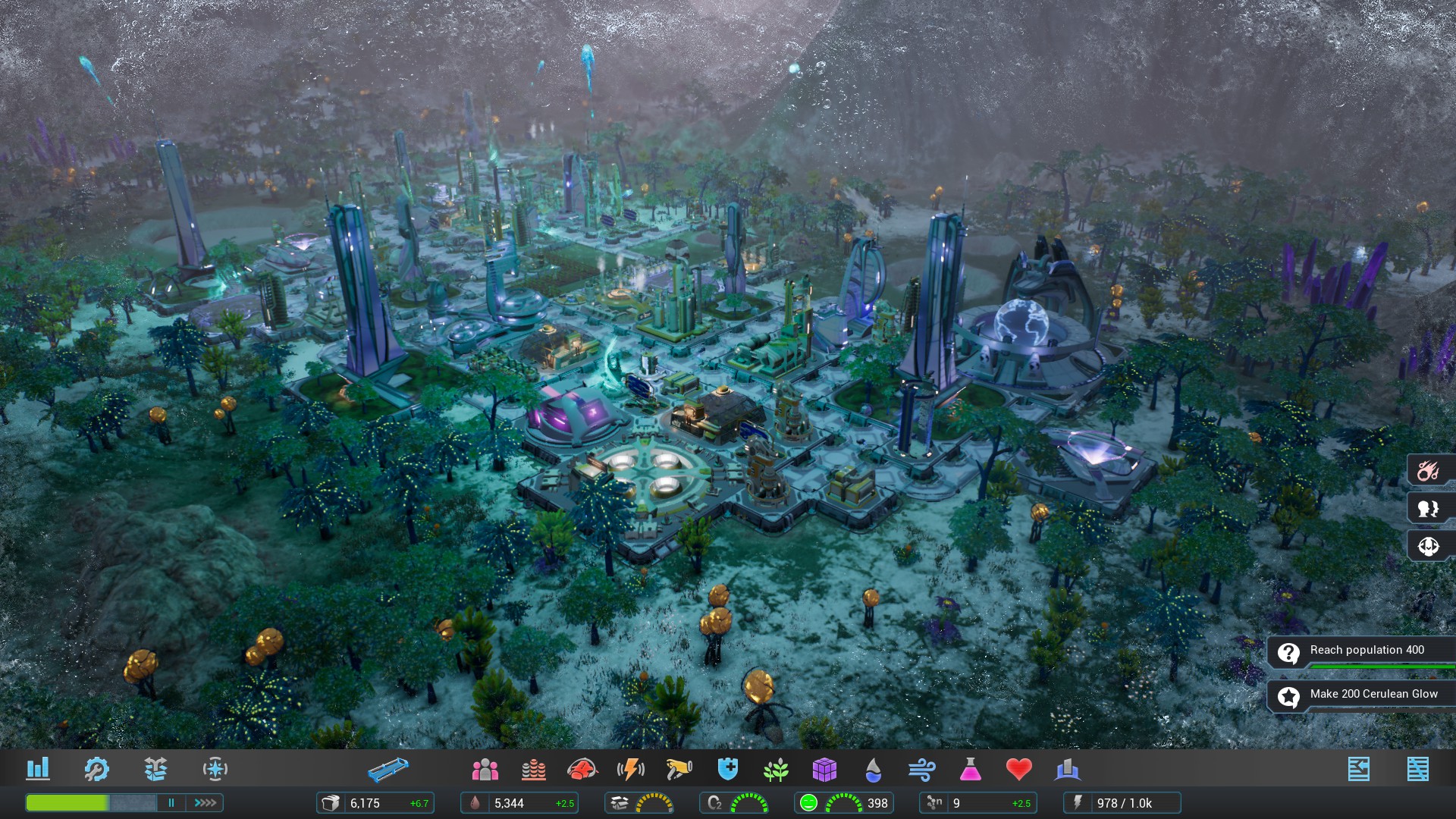 Despite the harrowing tale, being humanity’s first Governor of Space is a pretty laid-back job… at first. Aven Colony is a smaller-scale city builder, plopping you down on an alien planet and expecting you to make do. And while it will certainly give you all the tools you need, sometimes it gives you a few too many.

Whether you start out in the game’s campaign or in the sandbox, the beginning of each map is a rote affair. Find the power and water, then connect them to farms, habitats, and mines. Air filtration units (wouldn’t that be a fun job?) keep your people from choking on their own hermetically-sealed breath. All of these are linked together by tunnels that act like both roads and power lines.

Just when you think you’ve got the hang of things, bad things start to happen. Where other management-sims encourage you through the promise of economic prosperity, or a perfect flow of goods and services, Aven Colony encourages you through attempting to incite panic. The first and most consistent of these is winter.

You see, nearly half of every year is winter, and at first it’s lovely to behold, with shadows moving over the land, and ice forming around the edges of your screen. In this period, farms produce no crops. Solar panels and greenhouses (which are like farms, but are more expensive and cost more to maintain) only produce at 50%. Lightning and massive hailstorms will strike down at you with abandon, potentially laying waste to your buildings.

There are counters to this. Powerful geothermal plants will help the electricity dilemma (and also prevent massive toxic gas eruptions), lightning rods will take care of the lightning, and plasma turrets will destroy hailstones alongside other threats. 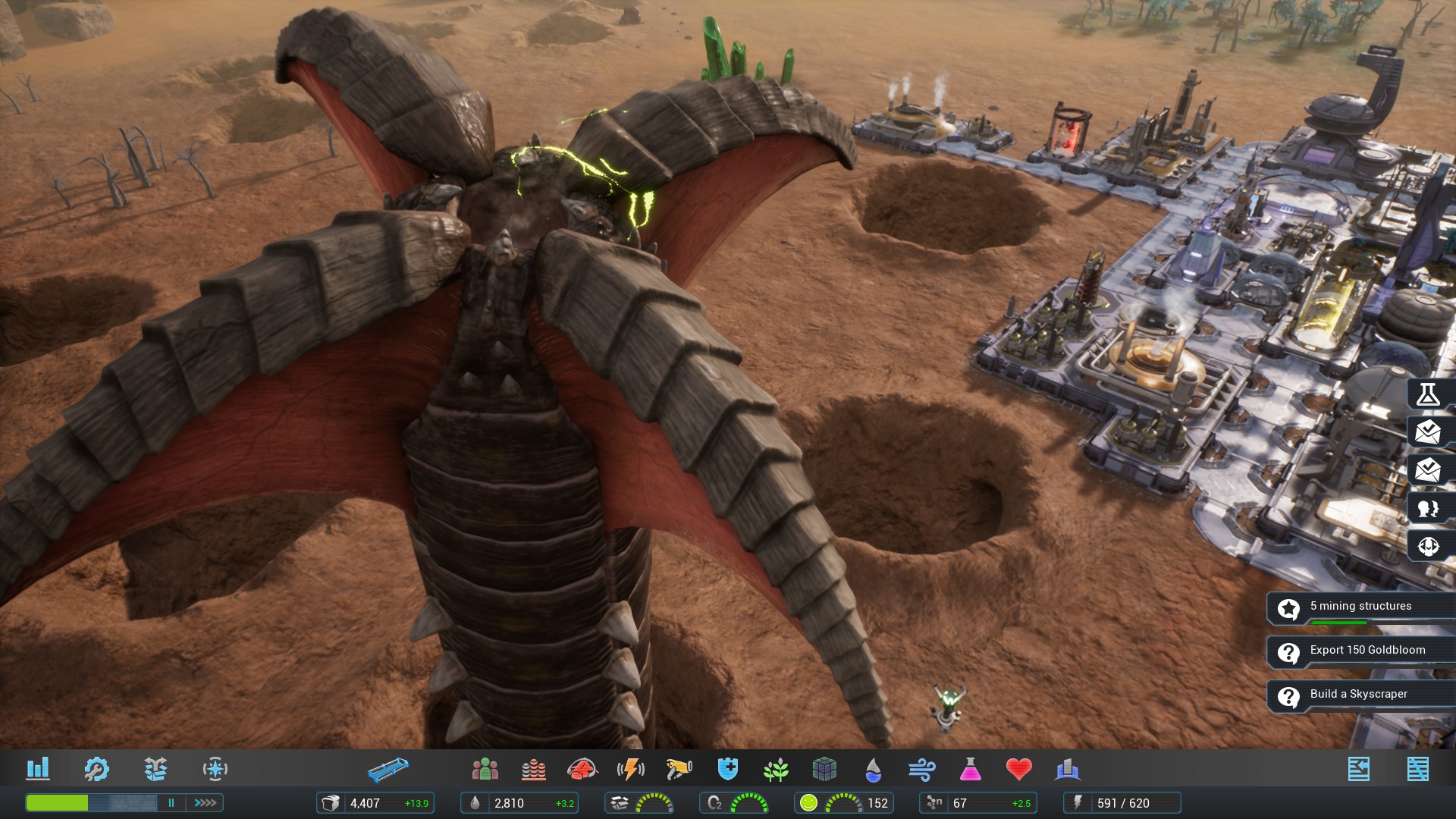 And more threats are indeed lurking. Some are obvious, like floating spore clouds that require a special type of drone to scrub your buildings clean, or a giant sandworm that pops up from underground and spews acid at your buildings. Initially these were all exciting (especially the sandworm), but the novelty quickly wears off, and the endless deluge will quickly fray the nerves.

More insidious is the death spiral (like the story at the beginning of the review), which is often caused by the game’s UI. There are tons of overlays to help you with things like air quality or finding arable land, but alerts are constantly bombarding you for every little thing, pausing the title for every disaster you’ve already prepared for. The title’s opinion of when a resource is low doesn’t seem to have any correlation to how much you have or whether you’re gaining or losing it. By the time you’ve figured out what you need, it’s often too late to come up with a plan to achieve it. In a matter of moments your popularity will crash, ending the game. 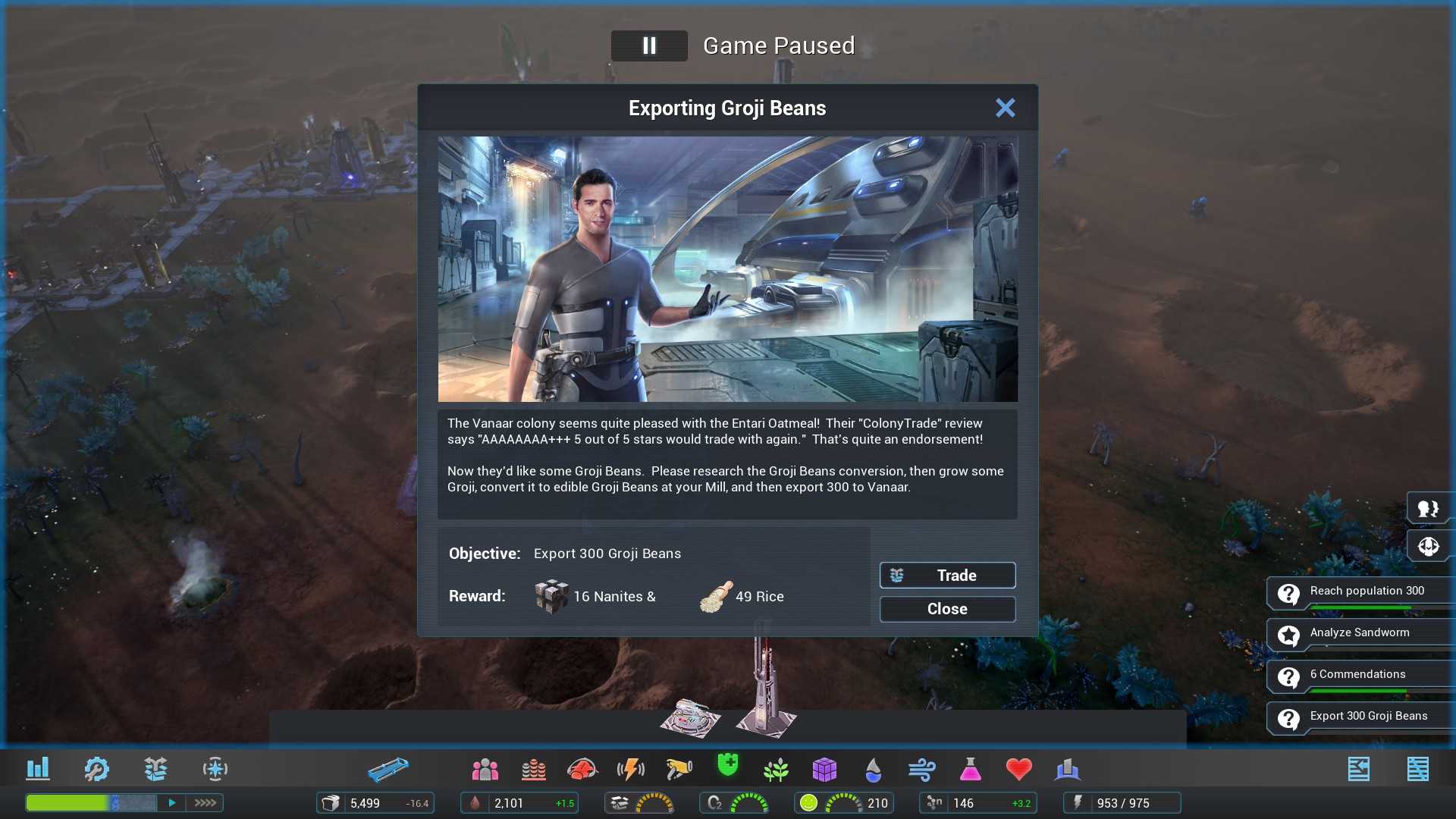 Underneath this noise-laden death spiral is a functional game with a genuine attempt at a campaign mode; a rare thing for the genre. It’s not deep, and the mileage you’ll get out of it will vary, given your tolerance to things like “Shipe” instead of Skype, “Cmail” instead of Gmail, and “Twertle” instead of Twitter. Still, each character has a personality, and they attempt to follow the story to a genuine conclusion.

It’s also a lovely-looking game. While the buildings themselves usually favor form over function (your chemical plant won’t be winning any beauty awards, until the drugs kick in), they’re still nice to look at, and the xeno flora and fauna do a good job of lending the landscapes an unearthly feel. It’s just a shame almost none of it can be interacted with. 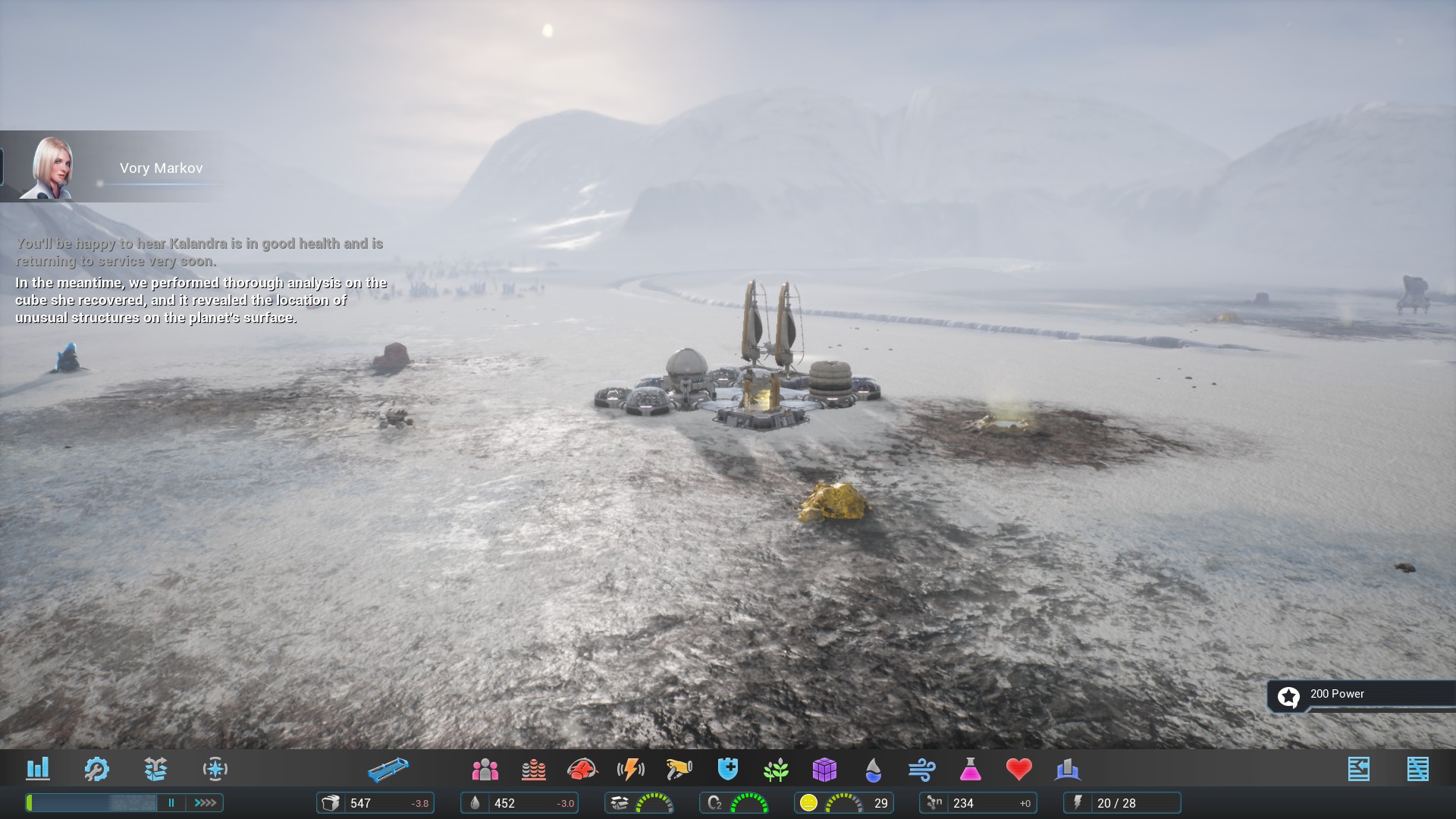 However, the sandbox will still be where you get the most fun out of Aven Colony, where you can tone down the constant, endless barrage of mini-disasters and fine-tune the rest of the game to your liking. Sadly, the maps are relegated to the ones from the campaign, but they’re still significantly more fun without spore clouds assaulting you every two minutes.

Despite the time I’ve spent harping on Aven‘s issues, it’s not necessarily a bad game. Mothership Entertainment has put in a lot of effort to try and create a threatening world for humanity to conquer. It certainly did the former, but the game fluctuates wildly from barely eking out an existence to being devoid of challenge. Humanity can do better on its first settlement among the stars.