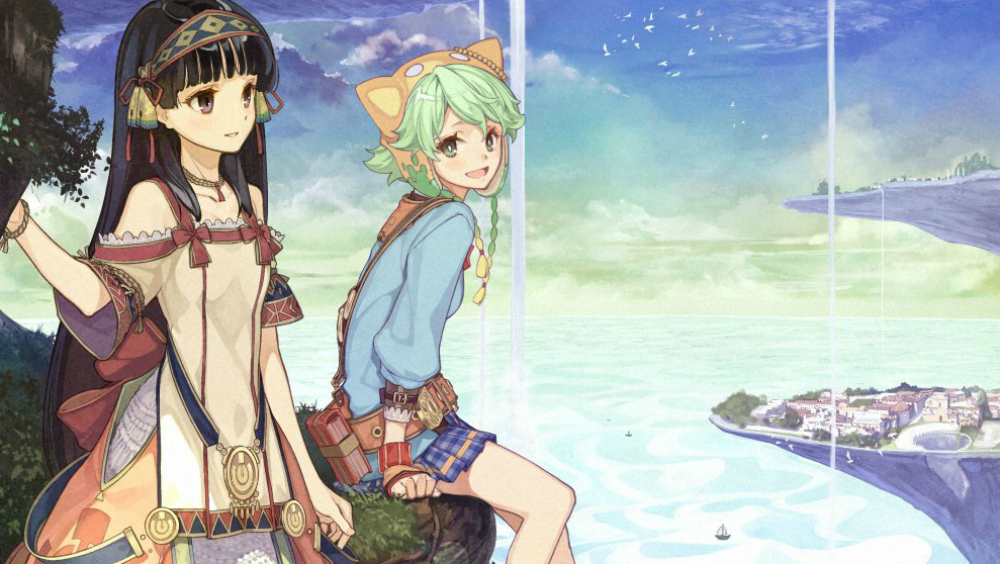 Dawning at the Dusk

When I first picked up Atelier Shallie Plus for my review in progress a while ago, I never thought I would ever get into a game that was mostly about making stuff and other secondary activities that lead to even more stuff making.

Now I am in this cycle because of a game that had some cute anime girls on the cover. No complaints here since I’m loving every bit of it — the anime girls and the item creation. 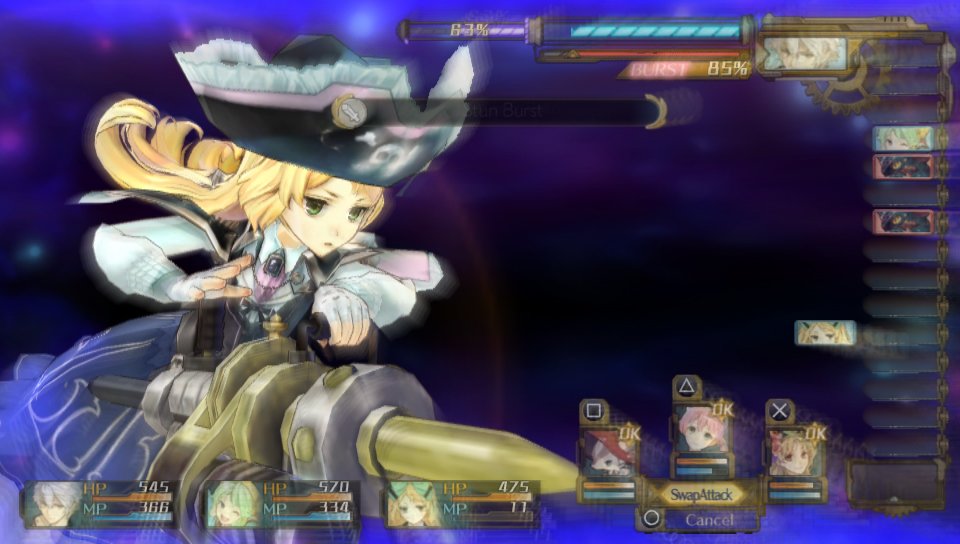 Atelier Shallie Plus is about two heroines whom both share the same nickname Shallie. Shallistera is an alchemist and a village chief’s daughter who traveled to the city of Stellard to find a way to save her village from a drought. The other Shallie, Shallote, is a native of Stellard and also an alchemist who is eager in wanting to prove herself and wants something more than being tasked with the mundane duties of a street sweeper.

Atelier Shallie Plus’ story has the two heroines’ paths intertwine and each will have their own strengths; Shallistera will have better synthesis, while Shallote is more ideal for combat with her special ability. These differences compliment each other in New Game+ mode, where playing as Shallistera on the first run and then as Shallote nicely flow into the other.

Atelier Shallie Plus is the enhanced third and final entry in the “Dusk trilogy” of the Atelier series, which all take place in a world mostly covered by sand and ruin in the land of Dusk. Returning  players who played the original Atelier Shallie, as well as the previous Dusk trilogy games, will be pleased to find that previous characters in the series show up as playable party members along with some new additional story events for almost all of the characters.

These new additions add a lot value for newcomers and returning Atelier fans as this enhanced edition includes the original PS3 release’s DLC content with costumes, bosses, and challenges. No knowledge of the previous games is required to understand the main story but knowing a bit of previous helps immensely with all the subtle and not-so-subtle nods to the world built up in the trilogy.

The Life task system has replaced the time limits, removing that time management pressure found in previous games, this also gives you more free time to dive into the item synthesis and/or combat. You can play at your own pace and go off accomplish mini-goals that reward you experience points and can break up the monotony by appealing to that part of your brain that likes making numbers go up. The Life task system also tells you what you need to do next to proceed with the story when you complete the required amount, you can choose to proceed or go off and try to accomplish more tasks for experience points. 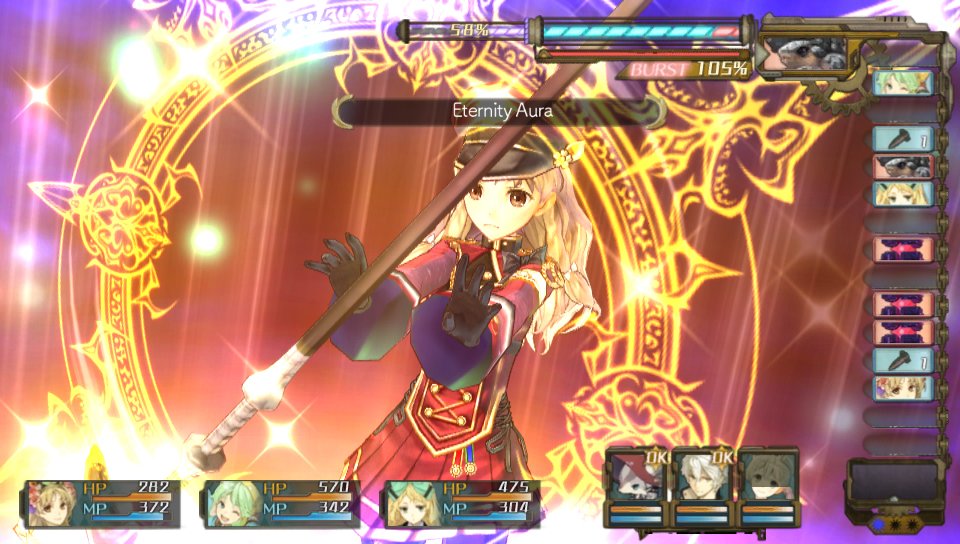 Exploration takes place at locations in the world map that are small fields or dungeons filled with an appropriate amount of monsters and items that replenish every time you leave. These locations provide your primary source for resources, as well as accomplishing requests. These fields can run low on resources to encourage players to explore other fields.

Combat is still a turn based system that will be familiar to JRPG enthusiasts, with up to six party members in battle where only three will be on the frontline and other members will be in the rear. The members in the rear can jump in to assist and switch in with an attack or absorb an oncoming attack by an enemy. Party members in the rear will also regain their MP over time. The turn based combat runs on a timeline which shows the order of turns of those who are going to act depending on their agility. Attacks build up a “Burst” meter, which allows for much stronger attacks which activates when full. 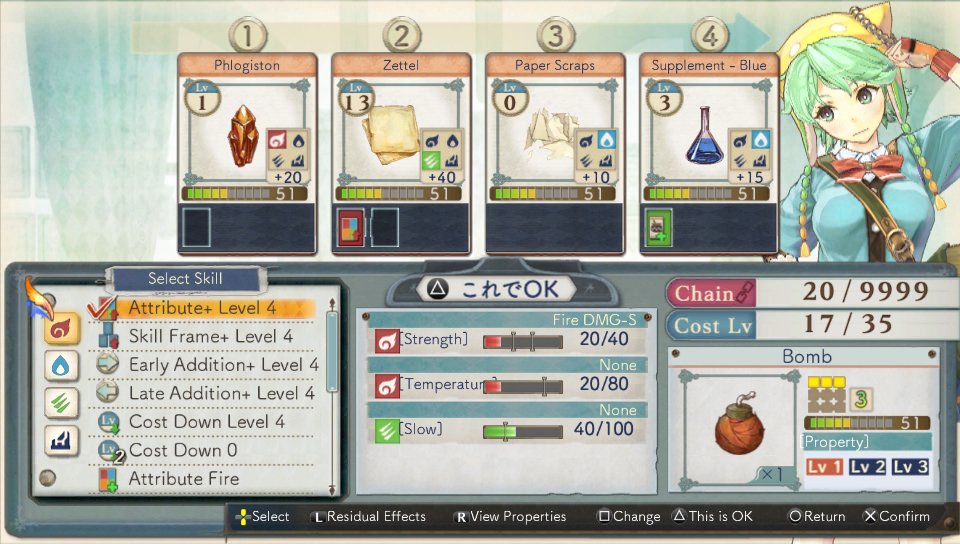 The item synthesis part of the game is rather in-depth, which is the bread and butter of the Atelier series. Gathered items from the field and combat as well as those purchased can be used for item synthesis of all kinds from healing items, attack items, accessories, weapons, etc. Items and gear will always consist of more than one ingredient and ingredients will have four elements that can dictate the types of skills, attributes, modifiers, and effects that you can change in the ingredients. Those variables also work differently for different kinds of items, such as a skill that increases the amount of resulting raw ingredients can also increase the use count when creating a usable consumable item.

Throw in the part where you find better ingredients for items and gear as you progress in the game, which will be a treat for those who like to min-max and make the best possible items. While trying to make the best gear and items are something you can do, it isn’t something you need to all the time but there will be those times when you have to get better gear by making it yourself. I’ve barely explained the synthesis system but don’t think that it requires much learning, a lot of the game is explained in simple and easy to understand tutorial text that can be accessed on the status menu. 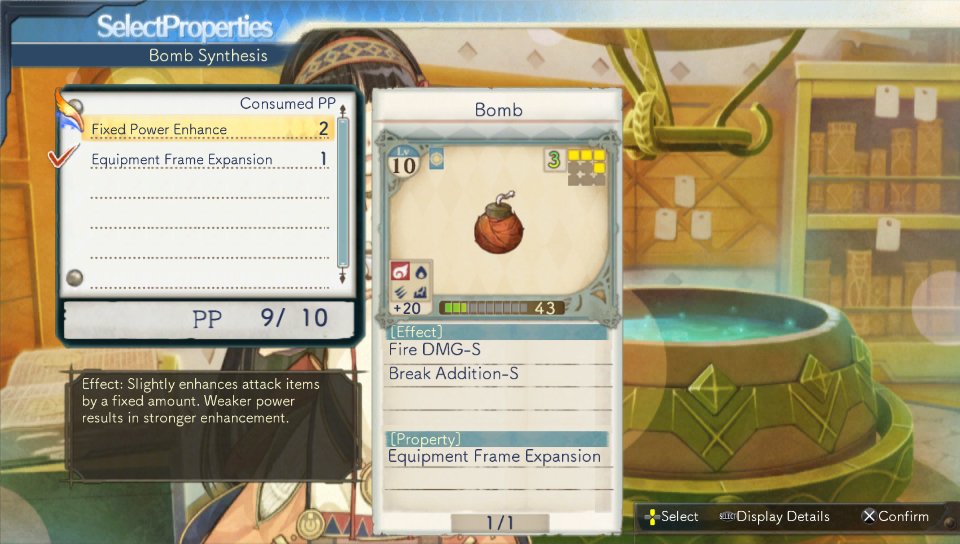 Visuals do receive a bit of a downgrade from the PS3 version along with a choppy framerate, but it doesn’t detract from the meat of the game at all since all combat is done through a turn based system and item creation is done in static menus. Graphical textures can get on the low resolution side alongside the occasional jaggy shadows and some pop-in. However, the character models look good since they are what you’ll be looking at for most of the game.

Those that prefer Japanese language track will have the option to switch to the Japanese dub. I played mostly with the English audio and found them to be good and not overdone, save for a character or two. There are some parts that were not dubbed in English but are still available in Japanese. The soundtrack is one of the best parts of Atelier Shallie, from that wonderful orchestral intro song to the folksy guitar music, it greatly complimented the feel of the game. 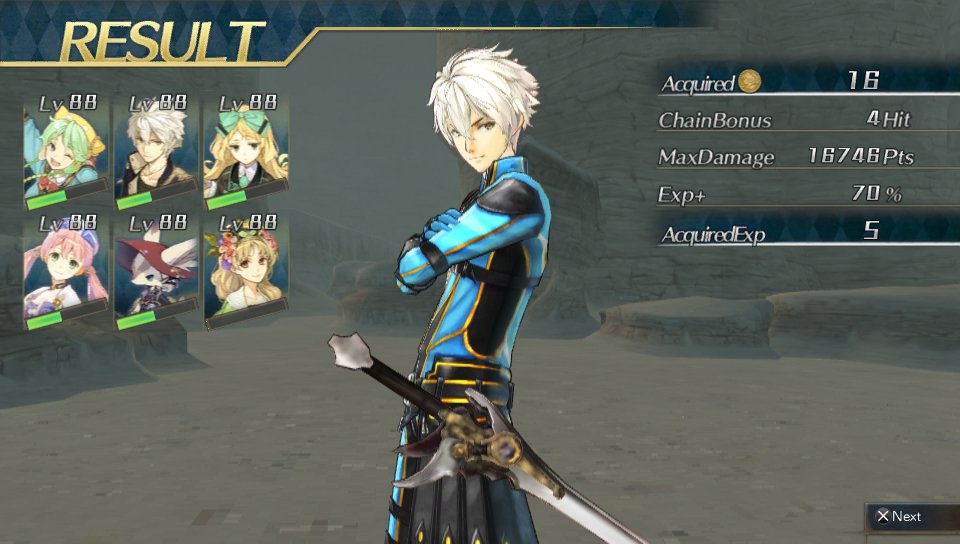 Atelier Shallie Plus doesn’t like to waste your time. Fast traveling is accessible at the push of a button almost everywhere, loading and transition between screens are short. I never felt that I was waiting for long in the game. Maybe a little bit in the little cutscenes or character event vignettes but you can speed those along by pressing a button. It’s unlike other JRPGs that like to show off and take their time with cutscenes.

Fans will miss that the time management pressure but those who were or are intimidated (like myself) by that feature will enjoy this entry more. There is significantly less reason to worry about missing anything due to time limits and players can take their time. There is even a “Story Watcher” difficulty in the game for those who solely want to focus on seeing the story, where enemies are much easier to fight.

Atelier Shallie Plus may close the curtains of the Dusk trilogy, but it is a good place to start for those new to the Atelier games and can even be a good way to ease into the series. The story doesn’t get overly serious while maintaining a lighter tone than your typical JRPG. Being on a portable like the Vita, this entry makes it easy to pick up and play where you can get things accomplished in short sessions. Atelier Shallie Plus is perfect for anyone ever interested in trying out an Atelier game.