There are many theories on why mech games died out. The question I have is “why are they coming back now?”

Perhaps these two issues are tied closer together than some may think. It’s a matter of innovation, I believe. With new concepts made possible through improved network and graphical ability, the once tired mech genre stands a chance to fight again with games like Hawken, MechWarrior Online, and Armored Core V.

After all, it seems throwing a mech into an FPS is the latest gimmick (see: Gears of War, Killzone, F.E.A.R.) Maybe people want a whole game based around that concept? After playing Armored Core V, I have to deduct that people will still be wanting that game.

To put it bluntly, this one just isn’t very good.

I’ve had a couple slight encounters with Armored Core before, but never played one from beginning to end. Being my first full-fledged Armored Core experience, it’s inevitable that I will get some things wrong in my assessment of Armored Core V. However, this is as much the game’s fault as it is my own for not attending the AC Master Class at Harvard like the best of you. It also doesn’t help that the game’s tutorial and manual tell you fuck-all. Again, Harvard.

If you are also new to the series, prepare to have some distant observations reaffirmed through play: ACV is one of the most archaic, obtuse, and frustrating games of this generation. It’s also one of the most ambitious. As if releasing a hardcore mech game in 2012 isn’t enough, ACV introduces some rather interesting online features. 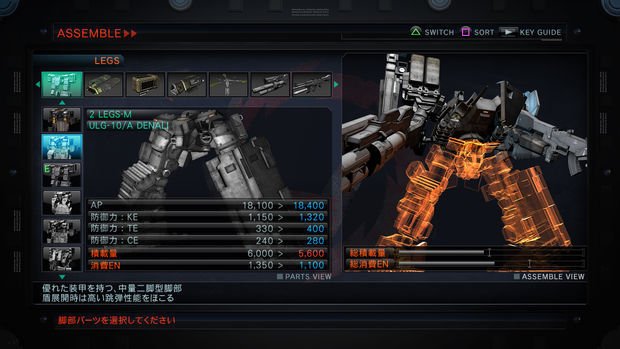 Like previous entries, the main draw of ACV is the incredibly in-depth customization options. Fans call it the Forza of mech games for good reason: There are so many possible combinations that it can be daunting to choose one. Everything from the legs to your booster can be altered to accommodate a subtly different playstyle. The game is at its best when you go online with a motley mech crew. One may jump across buildings with a sword in (mech) hand, while another might slowly walk toward a vantage point for its sniper rifle.

I imagine most players will stick with a specific build after a couple rounds. Weapons, however, will continue to be swapped, if only out of necessity. A key feature of combat is the three different weapon damage types — having the right kind of weapon available can be crucial to a mission. There were times where a fight went from near impossible to stupid easy because I didn’t have the right weapon attached. Coming to grips with this can be both massively rewarding and frustrating at times. It’s the love it or hate it calling card of the series and ACV absolutely nails this aspect. For those keeping count, that’s one thing the game gets right.

Despite the title, ACV isn’t a direct sequel. Actually, it’s a reboot of sorts in a series that goes well beyond five entries (more like 14). I know: how very Japanese of them! In an effort to stay contemporary — the graphics and audio sure as hell aren’t pulling their weight here — developer From Software (Dark Souls) designed the game around a persistent online world. The game is closer to Monster Hunter than an MMORPG, however. Like that beloved Japanese series, playing offline is an option but much of the game’s appeal is lost in the process. 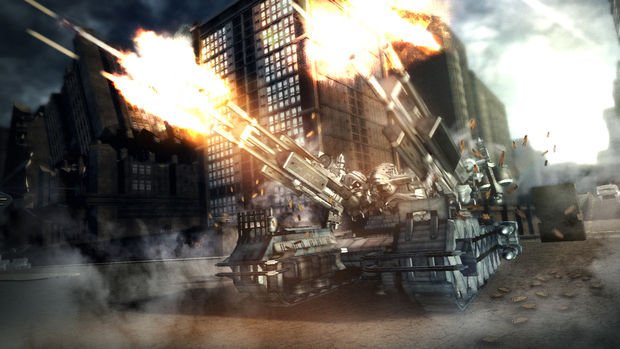 One of the first things you’ll do upon booting up ACV is starting or joining a team. Teams can include up to 20 players who can claim/defend territory (the game’s persistent world, as mentioned above), take on missions together, and trade items. Every victory a team member achieves will help level up the member and team, gaining access to more missions in time. It’s a cool concept that doesn’t amount to much  due to clunky design.

I imagine every player’s experience with ACV’s menu and systems will vary. For me, it was a very poor one. For starters, the team aspect felt utterly pointless. I changed my team a couple times, during my play sessions, and came across the same problems. No one was ever online on my team, and when they were there was no way to play with them. Thankfully, you can hire mercenaries that take the role of team members on missions. These mercenaries are just other players in the same boat as you who want somebody to play with. You will have to share the mission income with these players, but it’s often worth it. Well, sometimes.

Getting one of these guys into your game can be a painful process in itself. For whatever reason, the game would frequently deny my requests, forcing me to exit out of the mission and start another. Magically, it would suddenly work after repeating this process. There are a lot of strange issues like this in the game’s design. “Polished” is one thing that no one can call ACV.

Once you get into a story mission (which there are ten of), you’ll run into a whole new host of problems. One of which relates to the co-op aspect. If your co-op buddy leaves the game, you are forced out as well. This would be fine if you could keep your checkpoint or if these missions weren’t 30+ minutes long. This, however, is not the case. I found myself getting so frustrated with losing progress (we are talking at least three hours), I played most missions solo. Neither player even gets anything if they forfeit, which makes it even worse. 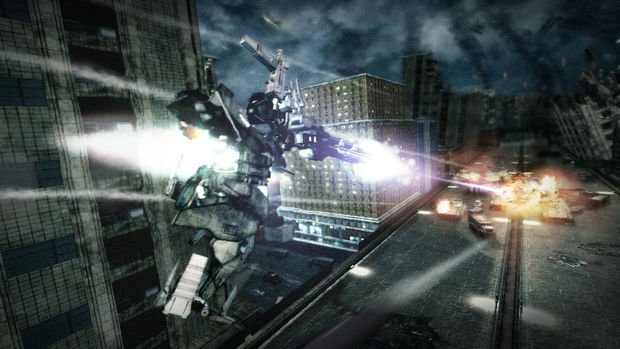 Here is the absolute worst part of all of ACV: After a match, the game forces you to send a message to the other players. I’m all for ridiculing these jerks, except all the messages are positive! “SUPERB JORB!!!” It’s like that scene where your mom walks in on your older brother beating you up and then she tells you to apologize for getting beat up. Except it happens repeatedly and you can’t hit them back when mom leaves.

The missions themselves are pretty shoddy, feeling like a 360/PS3 launch title in their presentation and design. You go from point A to B with very little variety in enemy type or objectives. You can look forward to such thrilling things as a sewer that loops three times for no good reason (this actually appears in two missions, since the game has only eight maps), a turret that can kill you in one shot, and some horribly cheap boss fights. You’d be wrong in thinking ACV is hard. It’s not. It’s just terribly imbalanced and unfair.

I went from one of the most grueling enemy encounters in one mission, to the next being an absolute cakewalk. The game is baffling in its difficulty spikes. Most of the challenge will come from the disadvantages of your particular build. You may come across a section that requires you to dodge fast, but you are built for slow, direct combat. I wouldn’t say this is a pro or con; it’s just the nature of this type of game. However, I’d like to think there are ways to offer alternative routes for alternative playstyles. Regardless, ACV is decidedly not progressive in its design despite the forward-thinking online wrapper surrounding the game. 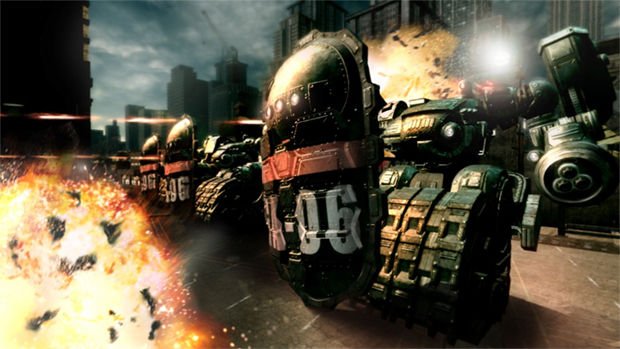 If you are in need of extra in-game income, ACV offers a couple options. At any time you can jump into different non-story missions. Order missions are simple in presentation and last about a minute to complete, most of the time. You just take down ridiculously underpowered enemies and move on to the next mission. Invasion missions let you and your team claim territory in the game’s persistent world. In execution, however, they play out just like an Order mission. The only difference is that you can have three team members with you and an Operator who can direct your team by setting waypoints and marking enemies.

The main draw of ACV is Conquest, which is its 5-on-5 multiplayer mode. Once you learn the nuances of the game’s combat, you can have some really exciting matches in Conquest. It’s a shame then that this mode is tied to some bizarre concepts. You aren’t just playing team deathmatch; you are fighting over the game’s persistent territory. As a result, you need to spend team points to even play this mode. Team points are a form of currency you acquire upon winning a match in any other mode. So, even if you are a serious AC player, you’ll be just as frustrated that the game sends computer-controlled mechs to defend your territory if a real player isn’t around. If all this sounds confusing and dumb, it’s probably because it is.

Even when I look past all of ACV’s hit-and-miss ambitious concepts, it is a very poorly designed game at its core. On a technical level, it is full of glitches and weird little quirks. Presentation-wise, its graphics, audio, art direction, and story are terrible and not in that charming dated way of other From Software games (here’s looking at you, Ninja Blade). 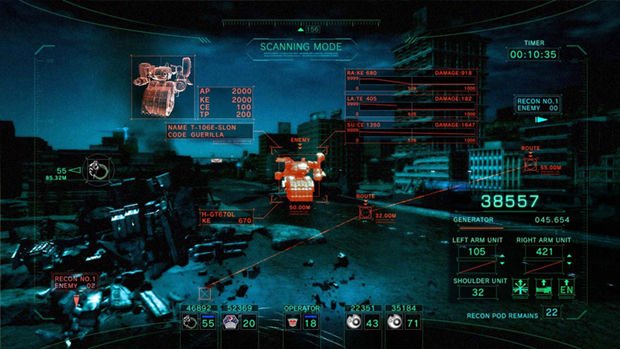 Even the mechs don’t control like you want. They are far, far more sluggish and heavier than the ones in AC4 that let you fly around the sky like a Gundam cartoon. The game’s opening sets the tone very well: This is a new Armored Core. It’s one where the mechs are beat to hell and the world is in tatters (even more so than before). Everything from the inexcusably bad audio design to the weird delay on boosting conveyed this aesthetic — probably not in the way the developer intended, however.

Even once I worked past the game’s convoluted, tutorial-free systems and understood how to build a mech, I found myself in a constant state of despondency. I just can’t get myself to care about the customization and persistent world when everything surrounding it so poorly designed and not the least bit fun. I mean, at least give me loot. Give me something!

ACV will make Chromehounds fans mourn that game’s passing and will leave genre newcomers crying out in frustration. A good mech game is hard to find, these days.