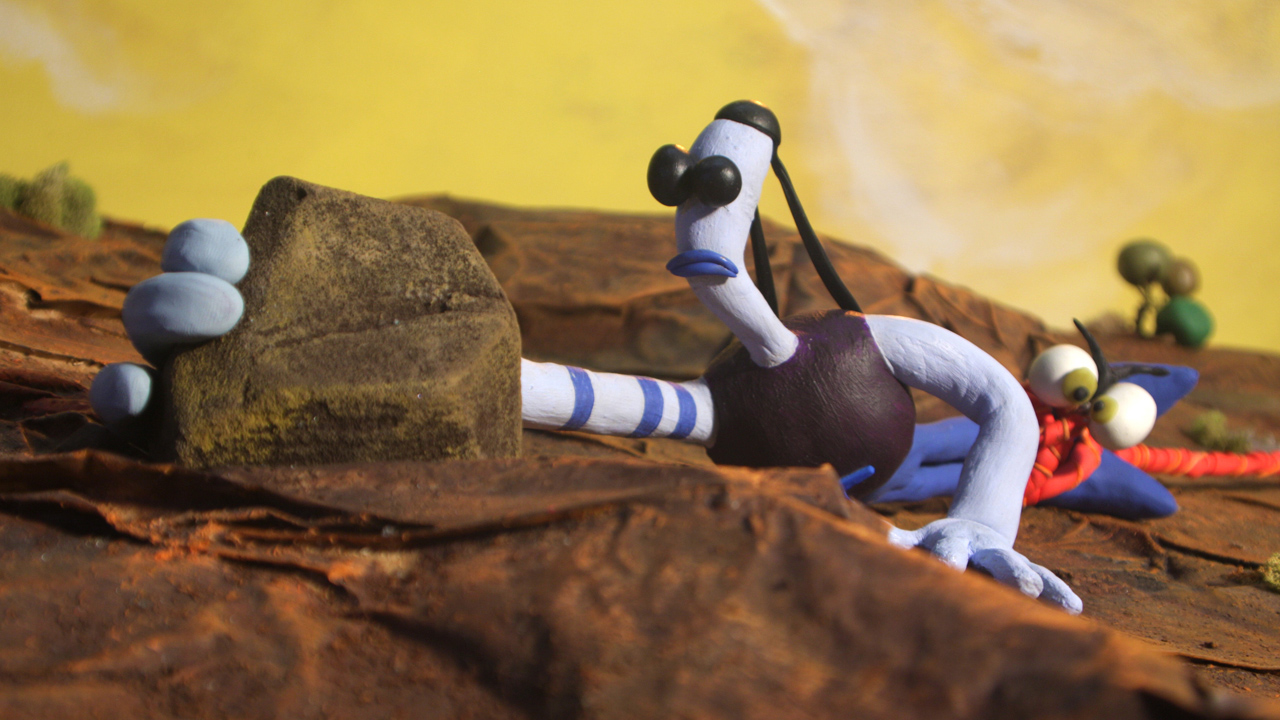 I still have my original copy of The Neverhood, bestowed upon me when my family bought our first Gateway computer in the mid-’90s. I was in complete awe over the challengingly silly puzzles, phenomenal claymation, and the eclectic soundtrack – however it was the heartfelt charm and innocence that gave the game its hallmark presence.

The Neverhood hasn’t just left its mark on me; it’s one of the most beloved point-and-click adventures in existence, gathering a cult following since its release in 1996. Armikrog is its spiritual successor, coming from the mind of Doug TenNapel and the hands of the distinguished artists from Pencil Test Studios such as Ed Schofield and Mike Dietz. Funded through Kickstarter in 2013, it has seen more than its fair share of delays and kept anticipation from fans on high. But finally, almost 20 years since The Neverhood’s initial release, we have a new adventure.

The game opens with a spectacular bang, showcasing an animated sequence of our hero Tommynaut and his sidekick Beak Beak crash landing into Armikrog, a strange complex on planet Spiro 5. Within its walls there are puzzles to explore, secrets to unlock, and history to discover as Tommy and Beak Beak make their way through the desolate alien buildings full of various oddities to find a way home.

From the onset Armikrog contains the charming, silly humor you’d expect from a TenNapel game, and of course throwback themes that reference The Neverhood. Gameplay rests on your ability to explore and figure things out on your own, moving from room to room collecting items that will come into play later. The age-old point-and-click rule of thumb “click on literally everything” especially rings true as each area contains various puzzles which you (hopefully) put together to make it through to the next building in the complex.

There’s not much life to Armikrog save for a few adorable fuzzy blocks, raptor-like creatures on wheels, and alien octopi who speak in a strange tongue – but it’s up to you to figure out why. A statue of a wise-looking man appears in different rooms from time to time and talks to you in a whimsical manner imparting general advice, but that’s about the most interaction you’ll have besides chatting with Beak Beak. Just like being in The Neverhood, for the most part, you’re on your own.

At any given time you can switch between controlling Tommy and Beak Beak with a simple click. Beak Beak’s abilities allow him to fit into small doors and occasionally fly around which prove useful when finding various items, however that’s generally the extent of the dual-character system. Tommy doesn’t really have any special abilities going for him (besides being the protagonist, if that counts). It’s fairly obvious when you need to use Tommy vs. Beak Beak, like when a button needs to be pressed or stood on, but the tricky part is understanding the order of when these things need to happen as contextual clues are virtually non-existent.

The gameplay mechanics are quite simple since there’s not much to the action besides clicking on things and moving from room to room, however it’s the complication of the controls which may throw players off. Old-school game logic is very much prevalent – I often took an extremely long time to figure something out only to realize I wasn’t in the exact spot for it to trigger. There were also moments when the opposite was true, and actions were far too fluid – like a traveling cart that can send you flying in various directions if you’re not careful.

Puzzles range from straightforward to insanely obtuse, and there were a few interesting ones in between that hit the sweet spot. I particularly enjoyed a music-based puzzle that popped up from time to time which had me placing little adorable nursery toys in a certain order. For the most part, puzzles rely on your ability to keep track of certain themes and recall various symbols and patterns throughout your journey. Unless you want to rely on GameFAQs, keeping a notebook and pen handy are pretty much key.

Armikrog didn’t hold my hand and indicate what I’d done right or wrong, so blindly guessing and forging through by clicking around was a common strategy. I found myself backtracking through rooms multiple times to see if I had missed anything, but more often than not I just had a general misunderstanding or difficulty navigating puzzles.

Some puzzles have a distinct or unclear order to them that won’t register if done incorrectly. I also had trouble with certain color-specific puzzles – some feature yellow and orange, or blue and purple pieces that I found to be nearly indistinguishable from each other. Those who have a hard time with colors may have difficulty getting through these puzzles as well.

The lack of an inventory, although a callback to The Neverhood, was still something sorely needed. After picking up an item, Tommy puts it into his stomach, and it’s never to be seen again save for when you click on the correct place on the screen. I would often forget which items were on hand, making it hard to connect the dots when the time came.

There were also a few outdated choices in terms of the interface – the manual save/load function is ancient, the cursor is plain without indicating what can be interacted with and how, to name a few. I believe Armikrog aimed to be specifically old school in this sense, but it was a tad frustrating. Whether these choices were intentionally nostalgic or not, it got in the way of actual gameplay.

Armikrog could use a bit more tightening in general. Subtitles were inaccurate to the point that it was fun for me just to turn them on and see what dialogue was meant to be in the game originally. However, the biggest offender was the bugginess around puzzles. At some points, they wouldn’t trigger correctly – for example after feeding a bug to Beak Beak (which is meant to trigger his flying abilities), he just sat there staring at me instead. There was also one point when he became stuck in his flying state, unable to move or trigger anything. Saving often is necessary to prevent situations like this.

On the brighter side, the environments are stunning and truly make the game come to life in a way that was hard to achieve back in The Neverhood days. Graphics are crisp and vibrant, animations are smooth, and the environment is full of quirky textures like fuzz and moss that make it pop. The clay is of course the hallmark style of the game, and sometimes I found myself getting lost looking thinking how long it took someone to mold that particular scene.

Music by Terry Scott Taylor was wonderfully quirky, but I wish there were more of it throughout. It was especially noticeable when working on a puzzle for a long time, as a single song would play and stop for a long period of time, then pick back up again later at a random interval. Similarly, despite the voice acting being top notch, I also noticed that sound clips would fade in and out when Tommy or Beak Beak were meant to speak – subtitles would appear but nothing would come out of their mouths.

Armikrog’s story is simple and charming, even though the pacing is a tad rushed for my tastes. Besides the opening sequence, there’s not much to the plot until the very end. I was hoping for more substance, or even more silly vignettes to keep me company – but perhaps I’m being selfish considering how long it takes to animate one of those sequences. Overall, I appreciated the atmosphere and especially one of the very last puzzles, which I felt was one of the more creative things I’d ever experienced in a game.

Armikrog does not surpass The Neverhood, but just like a successor to any celebrated piece of media, that would have been an impossible task. However, it does contain a unique charm in its own right which fans of The Neverhood or other old-school point-and-click adventures will especially appreciate. Those followers will likely forgive its faults for a taste of nostalgia, but others new to this realm may find it too outdated and unpolished.