Apotheon is the newest game from the developers at Alientrap, the team behind a small game called Capsized. Now personally, I loved Capsized and think it was overlooked by most. It had interesting mechanics and a plot that wasn’t told through lines and lines of dialogue. It left a huge impression on me and I knew to look forward to whatever that team did in the future.

Well, the future is now, and Apotheon is out. It certainly lives up to the high standard set forth by Capsized, and pushes the bar even further. With an art style that is bound to get people’s attention, this is a game can keep the attention with rock–solid gameplay. 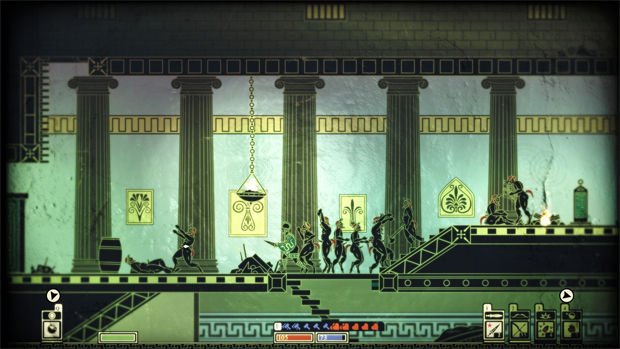 Apotheon takes players on a journey that will be familiar to anyone who has played through God of War. Zeus is upset with the mortal world and decides to…destroy them. This is where the player, taking the role of Nikandreos, steps in. Under the guidance of Hera, wife of Zeus, Nikandreos begins to unravel the gods of Olympus, one by one.

The journey takes the player all over: to the Forest of Artemis, to Poseidon’s Sea, to Hades’ underworld playground. Each environment has its own unique tone and feel to it which helps cement not only a sense of place, but a sense of wonder as well. Hades in particular made me feel appropriately uneasy, largely due to the amazing atmospheric music and dim lighting.

All major roles except for Nikandreos are voice acted, and the actors put on a strong performance throughout. The pacing is exceptional, and perfectly stringing the player along without feeling repetitious. A playthrough will clock in at about seven hours depending on how much exploring is done before the finale.

Apotheon promotes exploration as much as a game can. Not only are the benefits almost always worth it, whether it be more potions or a unique weapon, but there are plenty of exploration-based achievements for those who like to achieve achievements. Seriously, after completing the game I don’t even have one-third of the achievements. Turns out I suck at exploring…

When not exploring, combat makes up a large portion of Apotheon. There are three categories of weapons: melee, ranged, and throwable. Melee breaks down into axes, clubs, swords, and spears. Ranged is made up of bows & arrows, and sling & stones. Throwables are the bombs, traps, and other miscellaneous items.

Each weapon, whether melee or ranged, behaves in its own way. Long spears take a while to attack, but have a much larger range, allowing the player to stay away from danger. Knives are quick, but obviously have very little range. There are various types of arrows as well, like explosive or multi-shot, that diversify the ranged mechanics. There are also unique weapons with special traits, like a mace that will break shields or arrows that do extra damage from behind.

Nikandreos also wields a shield, but only when not using a bow. Shields can and will be swapped out often, and the size of the shield will vary. When holding the right mouse button the player will block, and the blocking length is entirely dependent on the shield. Shields and weapons all have durability as well, breaking when it hits zero.

The player is also host to a range of consumables that will help keep them alive. Nikandreos has both health and armor bars. Incoming damage will remove any armor first before taking away health. Walking over certain items or using the appropriate consumables will increase the player’s current health or armor, and it is important to note that it is possible to have an armor or health value higher than the max number. When this occurs, the number will slowly drain until it reaches the max number. 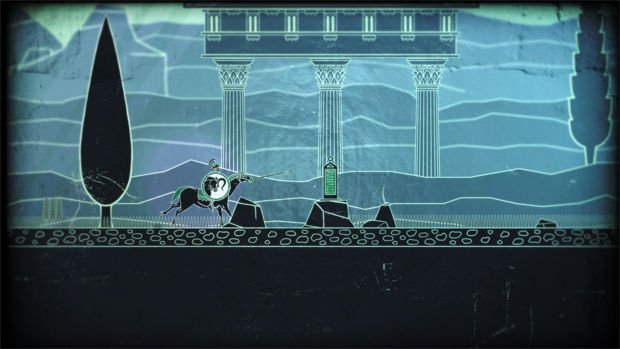 Combat is a constant tug-of-war match. Moving back and forth, shielding, stabbing, and rolling are all necessary in order to survive what Apotheon tries to throw at the player. The combat can feel unwieldy at first, but with practice everything begins to click. While there are a few mechanical upgrades, most progress comes from within the player. Slowly getting better at the combat system is easily one of the key aspects of the game, even if the player isn’t likely to notice a change until they are suddenly massacring enemies by the dozen.

There are two difficulty levels, with a third unlocked after completing the game. Playing on the higher difficulty felt well-balanced. It didn’t arbitrarily bump enemies’ damage up 1000%, but instead kept it manageable and forced me to play at a higher, but doable, skill level.

Enemy AI is rather good without ever feeling cheap or unfair. Many of the enemies act the same way as the player, with the ability to block, roll, and use varied weapons. The enemy variety is strong, though it does tend to see some repetition towards the end. Players can also face real humans in local multiplayer and try to murder each other in a one-on-one arena mode, which plays out exactly as expected and flourishes thanks to the intricate combat system.

The boss fights, however, are easily the star of the show. Each god has its own engaging scenes, and they are not simply “Okay, you’ve reached me. Let’s fight!” Every battle truly stands out from the previous one. The reward for each is always useful, and although there is some linearity to the design, the game offers enough freedom to the player so it does not feel restrictive. 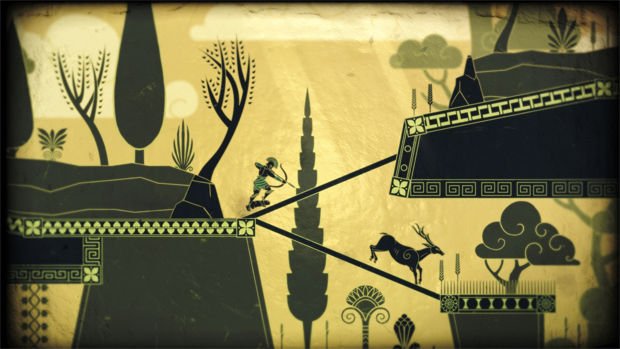 There is a hub world connecting all of the areas the player will travel to in order to deal with the gods, but it’s more than just a convenient central location. The Market contains vendors to replenish weapons (even the unique ones!) and consumables, sell new armor, or level-up a specific weapon type. Leveling weapon types increases the speed and attack power, regardless of the type. It would have been nice to see more uniqueness go into each branch of weapons instead of every upgrade being exactly the same, but it is great to be able to specialize in a playstyle.

Alongside combat are some platforming sections, which tend to be mediocre. The platforming mechanics are straightforward, with one exception. Jumping into some walls will have Nikandreos cling to them, requiring the player to then jump off to move up or out. This can be finicky at times, but thankfully the game never requires incredible platforming precision to progress. There is an ability later in the game that helps alleviate this, but it is very late in the game.

Yet another mechanic is the ability to craft consumables. As enemies die, they drop crafting items, money, health, or armor that the player can pick up. The player can acquire recipes from various locations to make potions, armor repairs, bombs, and other disposable items. There’s no chance of failure and crafting is intuitive. Plus, the game pauses while the crafting menu is up. It is another way to help the player out that is unobtrusive and simple. 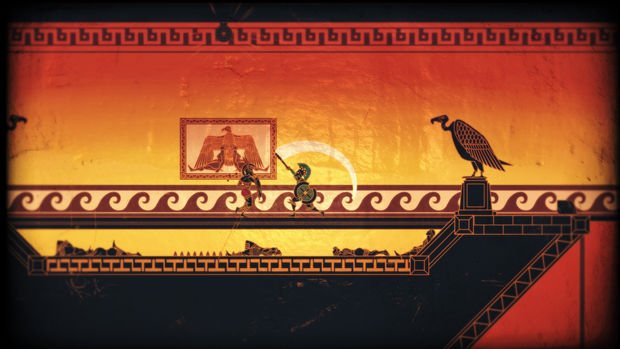 An obvious draw to Apotheon is its Greek black-figure art style commonly seen on ancient pottery. The aesthetic is incredibly accurate, and looks as if the characters jumped right off a piece of pottery onto the computer screen running at 60 frames per second. Animation is fluid, the exception being when a character turns around since the 2D image simply flips. The game is fully committed to this art style, and when you buy it, there’s one thing I want you to do: pause the game, and then move the mouse around the screen. The area around the mouse is illuminated, and shows the wall-like texture that’s always on the screen. For a moment,  it legitimately looks like the computer screen is an ancient Greek wall, and it is outstanding.

The soundtrack, composed by Marios Aristopoulos, is superb. In fact, I’m bummed there doesn’t seem to be a soundtrack version of the game available on Steam, because it would easily be worth the money. (Update: The soundtrack is available on Steam for $6.99!) There are some tracks uploaded to YouTube by Marios himself, so that can help give an idea as to what to expect. The atmosphere created in tandem between the visual style and the music makes Apotheon one of the most captivating and stylish games in recent memory.

It’s sure to capture the attention of anyone who sees it in action. Thankfully, the game more than backs up its aesthetic prowess with rewarding combat and exploration systems in place. While the combat hardly changes over the course of the adventure, Apotheon asks the player to apply their knowledge in such a wide variety of ways that it constantly feels fresh and exciting. The ancient Greeks valued balance and harmony in their art, and Alientrap has accomplished just that.