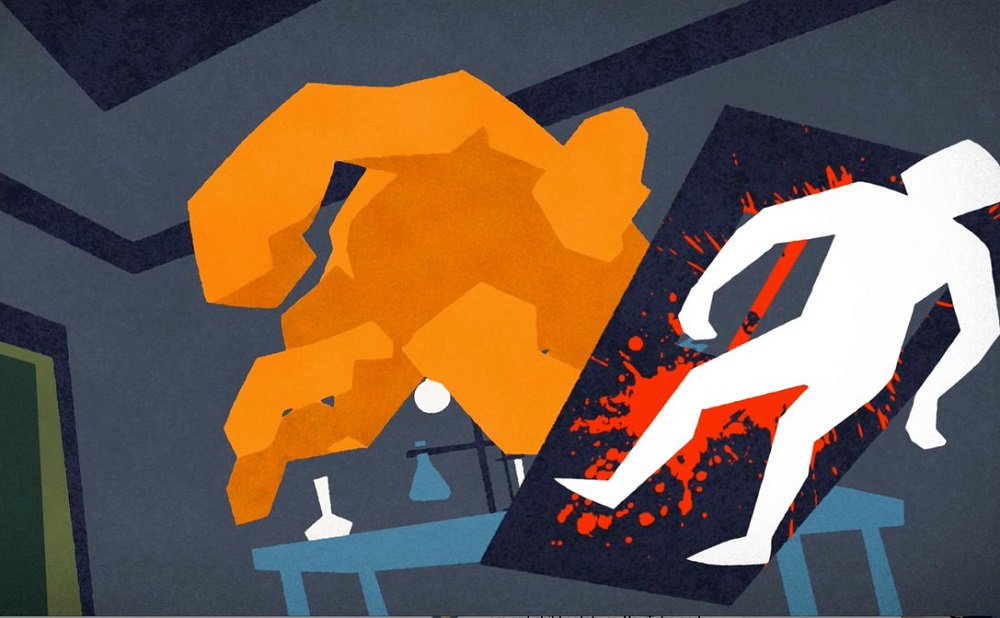 It’s a testament to the medium of video games that we simply haven’t run out of ideas yet. Video games, with no rules or limitations set on length, flow, realism, or narrative, can conjure up an almost infinite number of wild situations populated with weird and unique mechanics.

People complain about modern games being too samey, usually pointing to the glut of military shooters and open-world adventures that dominate the market today as “proof.” There’s some truth in that, sure. But that’s like saying all movies are the same if you only go and see Michael Bay pictures. As with any medium of entertainment, just keep digging, and original, unique, and downright bizarre treasures will make themselves known to you.

Ape Out is a new game developed by indie-kid Gabe Cuzzillo and published by those heralds of the weird and wonderful, Devolver Digital. At first glance it looks simplistic, with gameplay familiar to fans of the sun-bleached Hotline Miami, but on closer inspection, Ape Out is very much its own beast.

Ape Out has a threadbare premise. Players control a rampaging gorilla who, having broken free from their captors, proceeds to let loose in a series of varied environments. Once free from their cage, Ape barrels their way through a slew of mazes, while defending themselves from an army of randomly-generated and heavily-armed guards dispatched to halt this psycho simian.

Fortunately, being an enraged ape and all, our hero can distract the opposition by smashing them in the fucking face, a move which will send the foes splattering into nearby walls in an explosion of gore. Ape can also seize enemies foolish enough to get too close, using them as human shields, and even causing panicking prisoners to blow away their own buddies. Grab a dude with a semi-automatic rifle, and watch the lead fly, turning Ape Out into a momentary twin-stick shooter.

Heavily outnumbered and outgunned, players must stay on the move, reacting with split-second timing to keep Ape from going down in a gruesome hail of bullets. In order to get out of each map alive, players must think fast, react quickly, and use clever adaptation to deal with the immediate danger and keep our ferocious protagonist on the move. As the game progresses, new enemy types are introduced, from explosive grenadiers to window-smashing SWAT teams, all of which add new elements of danger and will require smarter and less reckless strategies. Perhaps you too will find help in thinning out the herd.

Essentially, that’s all there is to Ape Out, but that isn’t to say that this simplistic, chaotic premise doesn’t make for an amazing experience. Like many challenging fast-paced titles, such as the aforementioned Hotline Miami, Super Meat Boy, and others, Ape Out is fiendishly difficult but undeniably addictive.

Much of Ape Out‘s draw lies in Bennet Foddy’s graphical style: shapes without detail, clever use of light and shadow, and block colours. Ape Out has a delightful but strangely unnerving visual design, with the entire image emitting an erratic, animated texture. Two-tone stages become awash in rainbow splats of blood and gore, while gunshots tear through the surroundings as sharp geometric lines. Stage names and other on-screen text pops up in animated fashion, becoming as much a part of the environment as anything else. All of the above contributes to Ape Out‘s unique look, one I’ve personally never encountered in gaming before.

Adding to this is what is easily one of Ape Out‘s most important aspects, its free-form acoustic jazz score. Dynamic live drumming backs Ape’s escape, speeding up and slowing down in accordance with the on-screen action. Timpani hits and cymbal clashes accompany each and every gunshot, window smash, or hapless guard ripped limb from limb, with the beat building to a Whiplash-esque pace as the bullets and bodies start flying. Ape Out‘s reactive score – masterfully performed by Matt Boch – is the heart of the game. It is as much a living entity as anything else, building tension and pace whilst pushing the player forward, the tempo of the drum-beat syncing with your own pounding pulse.

When it comes to overall style, the game is something else. Minimalist in the best sense of the word, Ape Out‘s music and imagery combine with its weird concept and ultra-violence to create an experience that’s a real trip (don’t make me say “Daddy-O”). Ape Out constantly switches up its colour palette, musical rhythm, and in-game assets to keep things fresh, preventing repetition from setting in by introducing new surroundings and enemies.

Once all of the short stages (represented on the menu screen by cool ’50s jazz records) are complete, they can then be replayed at a higher difficulty, or in the score-attack-pleasing Arcade Mode, which rewards the player for speed, path-finding, and the amount of casual dismemberment.

If I had to find a flaw, it is one typical of procedurally-generated titles. Occasionally, players will run into an enemy pattern that weighs too heavily in the game’s favour. There were several times I found myself in an enclosed space with certain types of enemies where I felt death was my only option. This is definitely a frustrating occurrence, but fortunately isn’t representative of the whole game.

Ape Out might not be for everybody. With its stripped-back gameplay, oddball concept, and lack of “traditional” visuals, some players may be turned off by its weirdness and its difficulty. That’s understandable – it’s a niche game for sure – but everything that makes Ape Out different is also what makes it so special. Like all the best games of the golden era, Ape Out takes a simple premise and transforms it into smart, taxing, addictive gameplay. On top of this, the budget price-tag only sweetens the deal (though players should be aware that this is a short ride we’re buying into here).

A marvelous example of what can be done when talented individuals think outside of the box. Ape Out features challenging – occasionally annoying – but wholly addictive gameplay, quirky and attractive visuals awash with colour, all backed with a breathless score. This odd release is proof positive that creativity in gaming remains alive and well. Go Ape.