11 bit Studios’ Anomaly Warzone Earth was a creative little “tower offense” title, and a big hit on PC and mobile last year. Now it has finally been released on Xbox Live Arcade. Mouse and keyboard controls are out, full gamepad controls are in, and a set of “Tactical Trials” have been thrown in the mix for good measure.

The question is, does it hold up to its big and baby brother versions with their respective control options? 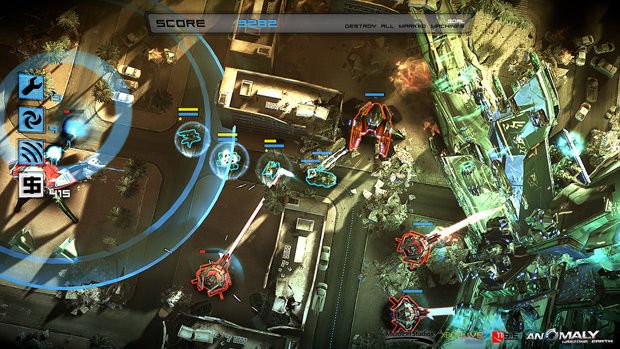 For the most part, Anomaly Warzone Earth is identical to the PC version we reviewed last year (it’s also available for Macs). In a nutshell, you control a Commander who can use abilities to drop support auras (repair, decoy, smoke, bomb), and buy units to form a squad which you then carefully guide on a manually created path through a map dotted with towers. Along the way, money can be collected by destroying towers or shooting money caches, and spent on new units or unit upgrades. It was a fun mechanic at the time, and it still works well on the Xbox 360.

Playing it with a controller was already possible in the PC version, and Anomaly was created with a controller in mind, so it’s a no-brainer that it’s functional enough this time around. It is a bit of a different way to play it, though.

Directly controlling your Commander’s movement is great. It allows you to become more attached to your Commander, rather than clicking him all over an area while you look elsewhere, and in the process it largely removes the need for direct camera control. The ability menu pops up when you press the A button, which pauses the game, and abilities are dropped where your Commander is standing.

This method of using abilities might take some getting used to if you either played the PC version with mouse and keyboard, or are more of a micromanagement player of PC real-time strategy games. In Anomaly on PC, you could simply right-click on the exact area where you wanted to place, say, a repair aura. As your Commander walked over to perform the action, it gave you a short amount of time to think about where you wanted to go next. Likewise, clicking on item pickups with the mouse would let you scroll around the map to see what obstacles lie ahead, while your Commander did his thing.

Using a controller, you are more or less inclined to stick close to your squad so you can use abilities as soon as possible. Instead of running the calculations to account for the time it takes to walk to an ideal ability drop from whatever ability item you were planning to pick up, you tend to go back and forth to your squad to keep a closer eye on things. On the PC, you also quickly learned to visualize the radius of various abilities in your mind’s eye as you moved your mouse around for the perfect ability placement, and it can also take a few mission to fully adjust to the idea that you need to project this mental ability radius over your Commander when you are in direct control of his movements. 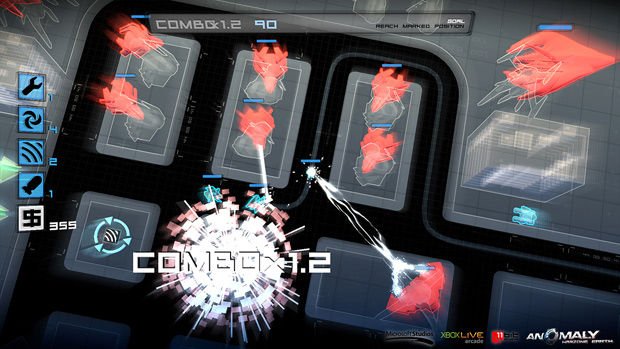 That is not to say that the console controls are inadequate, because they are perfectly functional. At worst, players of the original who tried to secure a spot at the top of the leaderboards of the special Steam winter map — which was insanely hard — may bemoan the extra button presses required to swap a unit’s position in your squad, due to not being able to drag and drop units into position. This map in question is absent from the XBLA version, however, and on anything but the highest difficulty you don’t really need to swap unit positions around to keep them alive for long enough to pass a mission.

Beside the story mode and the three bonus Squad Assault levels, which make you plan routes to clear “waves” of enemy towers within a set time limit, a new mode featuring six Tactical Trials has been added. Set in a VR training environment, each Tactical Trial is unique and plays like a puzzle version of Anomaly Warzone Earth.

These missions can be very challenging, even for Anomaly veterans, as they make you plan ahead and use abilities with even greater care than may be used to. The new mode also offers a lot of variety, ranging from a mission where you start with no abilities at all, to a map with one-way streets, or the inclusion of a VIP unit you have to protect from harm. It’s a great addition to the typical style of play, and even though there are only six of them, the Tactical Trials will take you a fair amount of time to complete. 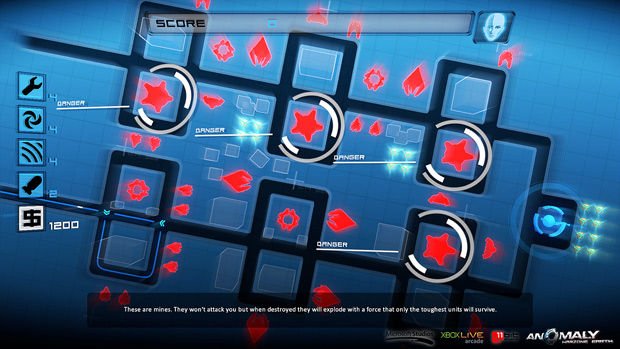 Anomaly Warzone Earth is the same excellent game for same price on a new platform, with an extra mode to boot. If you’ve already played the PC or Mac version, the Tactical Trials alone are not necessarily worth repurchasing the game for — although you can unlock a Commander Avatar outfit if you like those kinds of things. If you had missed out on it before, then the PC version with its higher resolutions and multiple control scheme options is arguably still the version of choice, although any difference in playstyle preference between the versions may depend on your affinity with PC strategy in general.

In case you don’t have a computer to play games on, this XBLA version of Anomaly Warzone Earth is just as good the original, and one less reason to avoid putting off playing this game.