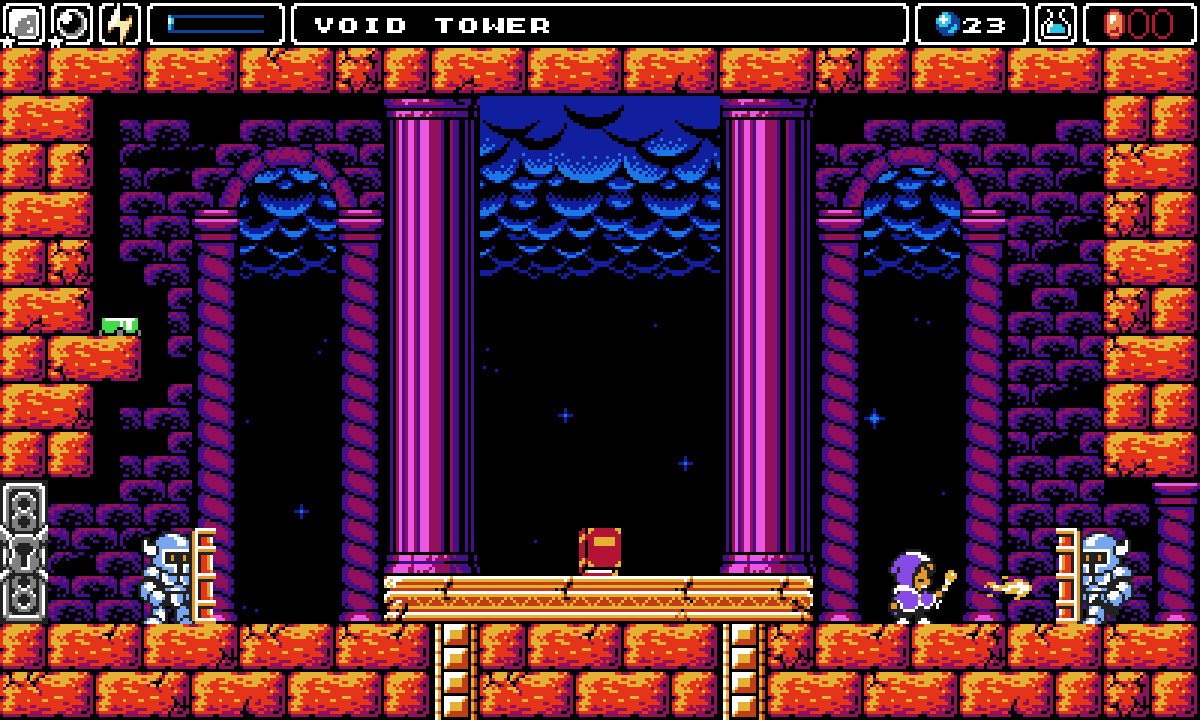 Rise from your magical grave

I think we’re over the whole tired “ugh not another retro game” rhetoric that kicked off during the Xbox Live Arcade era.

Once people realized over the course of the past decade they were here to stay, and that many of them were quite good, the rabble died down. Some are more retro than others, and Alwa’s Awakening definitely skews toward the ’80s end of the spectrum.

Alwa isn’t kidding around from the get-go: there’s an enticing stream of water right next to you on the very first screen, begging to be explored for a nice little secret cavern and….oh no it’s insta-death. Elden Pixels revels in the idea of killing you over and over, but with a well-designed intentional methodology of madness rather than a devilish “hardcores only.” fashion.

You get your first magic rod several minutes in but it’s devoid of any actual magic — you can only whack things with it. Your next mighty power: summon a green block. Our hero Zoe is a muted magician and it mostly works in its favor. Alwa is another Metroidvania with save halls and an interconnected map, sure, but it does try to proclaim itself as a no-holds barred homage to adventures like Milon’s Secret Castle.

Sure to be a contentious choice, Zoe has a floaty jump and I dig it. The adherence to player control is just one of many nuances that help stave off the idea that Alwa is “cheap.” You’ll need that floatiness as there’s a lot of tricky jumps that all feel doable. You can tell a lot of thought went into the physics system when you can jump, summon a block, and “ride” it so to speak down onto a spike pit. Alwa is equal parts Chip’s Challenge-esque block puzzle finesse and fancy footwork.

It really does feel like a slightly juiced-up NES game, but its creators aren’t blind to the shifting climate. If you want you can turn on “assist” features (quick respawn, key map locations marked) but I don’t think most of the target audience will need them. Quite a lot of variance with enemy character models, even down to the green blobs. Death animations. Some clever placement of hazards: you might need to look at the walls and notice that one of the columns has a bird head that will spit fire when you enter its view. A few well-hidden Easter eggs are there too for discerning players.

If you’re not one for retro adventures, just know that it doesn’t do anything different, nor does it seek to drastically change the game like say, The Messenger did. I could play these joints all day, but the old school conventions allow the team to rest on their laurels at times. I mentioned the slow-end leaping physics earlier, and that principle extends to the very core of Alwa. My main grievance is its stretchy length.

Roughly 10 hours is a mighty long time when it can occasionally dip, and some wittier writing for a few vanilla NPCs and several fewer filler sections would have fixed its pacing problems. When you hit that sweet shortcut and that tiresome work pays off some of that stress melts away, but the overworld could have been tightened up all-around, especially toward the start as you’re beginning to acclimate to some of the more involved puzzles. There’s a stiltedness to the tutorializing of some concepts in a “okay, we get it” kind of way.

In case you haven’t noticed there’s a boat load of Metroidvanias coming out recently and Alwa’s Awakening hangs with them. Its restrictive without going overboard, allowing the highs outweigh the lows. The ability to chisel away at some tough rooms with a Switch on the go helps make it even more digestible.