Oh, I see how it is. Have the gay guy review a game about fruit.

I’m baffled right now. Absolutely baffled. Befuddled even. Nonplus. The karting genre is a gaming no-brainer. It’s one of the linchpins of the industry, corralling casual and hardcore gamers alike. It’s been that way since the early 1990s, and yet, with the PlayStation 4, kart racing fans are woefully underserved. Sony squandered its chance to carve its own franchise in the last generation when it decided to compete with itself, releasing both ModNation Racers and LittleBigPlanet Kart. Without those, karting fans have had to make due with Beach Buggy Racing, a bad console port of a bad mobile racer.

Maybe that’s why I decided to give All-Star Fruit Racing a shot. So desperate for a quality karter on my Sony box, I’d give into the idea this colorful racer could  be what this console’s been missing. And I can say now, without a doubt, this is the best kart racer on the system. But given its competition, that’s a mighty low bar to hurdle. 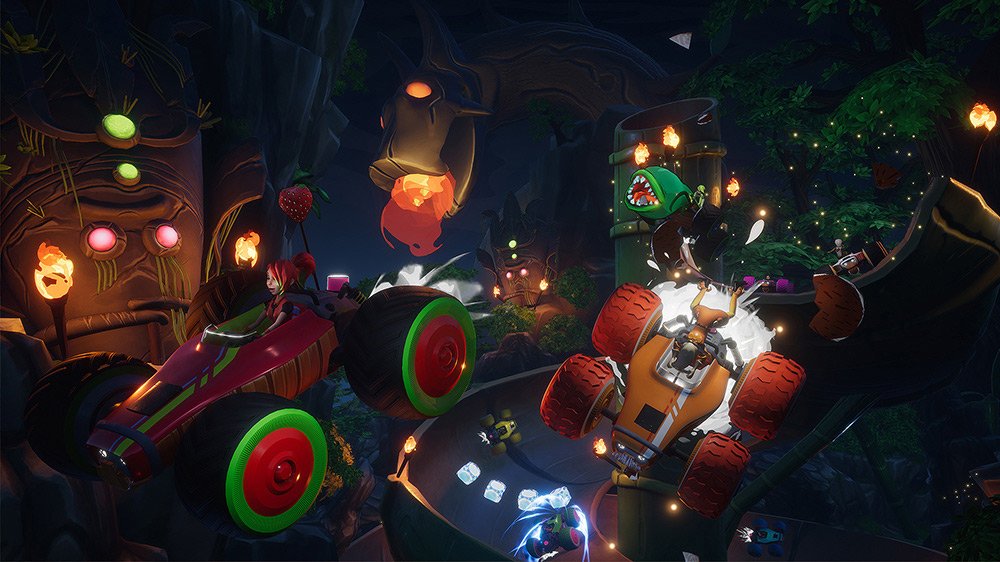 Most games in the genre do. Either they bring together characters people know and love — your Marios, Diddys, Bandicoots — or they introduce some mechanic that can give it a leg up on the competition, like create-a-track or using actual cars instead of karts. The former is more common than the latter. Mascot racers were a dime a dozen for a while and will probably continue to be with Team Sonic Racing and Nickelodeon Kart Racers on the horizon.

But All-Star Fruit Racing doesn’t have any of that going for it. All it has is fruit and lots of it. In all different shapes and sizes, scattered throughout the 21 included tracks and imbued in the racers themselves, fruit is the conceit around which this game was designed. It’s fruit all the way and if it were a slightly better or slightly worse game, I’d probably be in a more affable mood, jotting down dozens of fruit puns I could interject into this review. Unfortunately, All-Star Fruit Racing is so middle of the road, so unexceptionally average, I just don’t have it in me.

It’s quite difficult to make a rotten kart racer and I can say without question developer 3DClouds avoided doing just that as nothing in the game strikes me as horribly awful. The characters lack personality and are designed with an art style like looks like one of those cheap, Canadian CGI television series from the last decade, but they feature character specific weapons, a concept I adored in Mario Kart: Double Dash that has been absent ever since. The fruit motif wears out its welcome quite quickly, but I’d be lying if I said snow on fruit isn’t my jam. Icy Grapes is a delightful jaunt through a snow-crested winery and Frozen Castle, a single lap track adorned with frozen pomegranates, wouldn’t look out of place in a more legitimate karting game.

Those are just surface level complaints though and a quality racing game can succeed if the quality of the racing itself is up to snuff. With All-Star Fruit Racing, it’s not, though it’s not for a lack of ideas. The game mixes things up a bit with how items work, leading to one of the stronger concepts found in it. Many races will have mystery item boxes standard to the genre, but I’m far more interested in races that have me collecting fruit from the track. In these races, collecting a piece of fruit doesn’t automatically give me an item to use. Rather, it fills a fruit meter, and when that meter is filled, I can mix and match fruits for different items. Filling up all of the fruit meters grants me the ability to use my character-specific weapon, which, somehow, is the only fruit-based weapon in a game that’s all about fruit.

There are also different approaches to the racing format. The game has standard three or five-lap races, single lap races, and elimination races, where every dozen or so seconds the racer in last place is eliminated until there is only one left. Each cup in the career mode will mix and match these race formats with the different weapon collection methods, making for a bespoke experience with each trophy I collect. In addition to the cups of the career mode, I can engage in single track races, Fast Championship mode which selects three tracks at random, Custom Championship mode where I can choose up to six tracks to race, and a Time Attack mode. There is local and online multiplayer, the latter of which isn’t available at the moment — or it is and I just can’t find other reviewers playing at the same time I am. 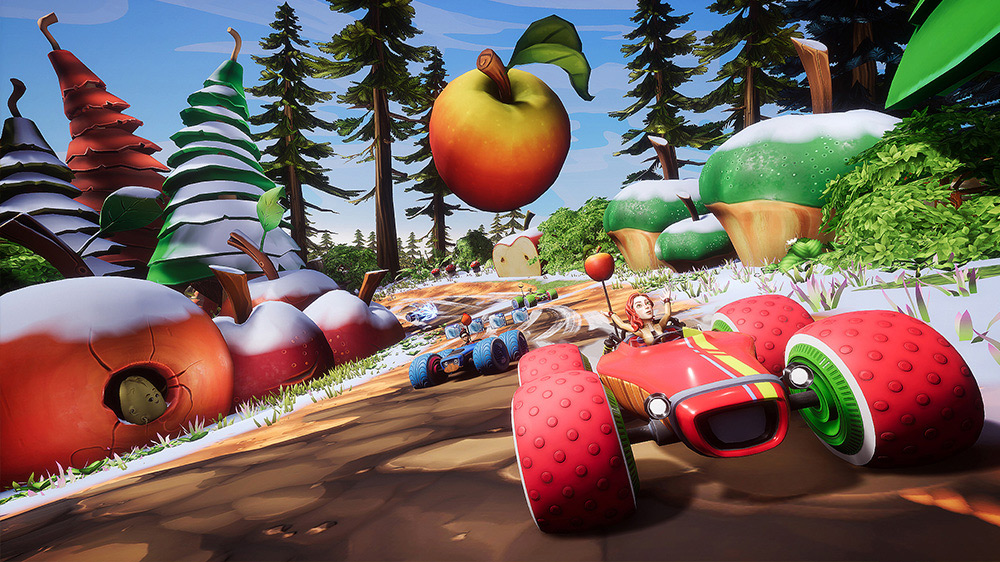 On paper, that all sounds plumb. In practice, it should be the same but there are issues throughout All-Star Fruit Racing. Let’s start with how the karts handle. They actually steer pretty well. Drifting for a boost is encouraged, but elongated drifts will actually cause to wipe out. It’s manageable, but the speed boost I receive from pulling off a drift doesn’t kick in right away. There’s a lull from when I exit the drift to when the boost takes effect.

The longer I hold a drift, the longer my speed boost will be and in a tight race on the hardest difficulty, I appreciate whatever leg-up I can get. These boosts matter, unlike any of the boosts I receive from item boxes or my fruit concoctions. There are two, maybe three, speed boosting items in the game that don’t actually gain any ground on my competitors. They’re anemic, and the only real way to gain ground on the highest difficulty is to combine great drifts with the various boost pads that line the tracks. All of the other items are a mixed bag of either weapons I use to hit a single target in front of me or traps I drop behind me to deter those creeping up on my rear. Firing them off isn’t exactly a visual spectacle and almost all weapons strike their target with little pomp.

The weapons and items aren’t great, and I’ll say the same about the track layouts. Some are quite bizarre in fact. Avocado Roller is a single lap track riding atop a multicolored snake where each color on it affects my tires in a different way. Neat concept, awful execution. It takes all of one minute to reach the finish line and due to the short length of it, a single attack from another racer will render any possibility of a first-place finish moot. Then there’s Lychee Loto, a multi-lap track with a giant loop that ends jarringly because its impossible to see what’s ahead of me.

Many tracks in the game have this surprise element about them, where what’s ahead isn’t always seen in advance, forcing me into blind turns. Track memorization will alleviate this issue somewhat, but there are still questionable design choices throughout. There is more than one track in the game where the road will fork and one route is blatantly shorter than the other even if the longer option has a boost pad on it. There are also invisible obstacles I’ve run into, boost pads that don’t seem to work, and other racers that will be ahead of me one second and then far behind the next. 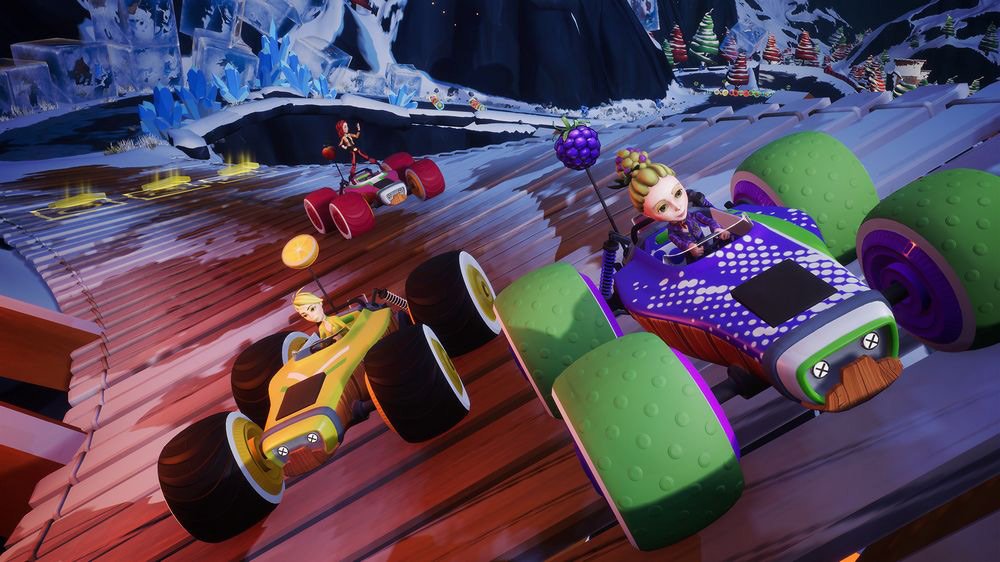 There are other bugs and design flaws. Sound effects are wonky as hell. In elimination races, when a competitor is eliminated, their name will appear in the middle of the screen blocking my view. When it gets down to just me and one other racer, the countdown, which usually goes from nine all the way to one, will cut off at three for no reason. Some cups will feature four racers through all of the tracks, other will have 10 and it’s never explained why. Starting positions for racers don’t seem to follow a pattern. There is no rubber-banding, but opponent AI is wildly inconsistent. One race they’ll be a real challenge, the next, and this actually happened to me on more than one occasion, all of my competitors will instantly veer left at the start of the race, giving me an easy win.

I have a lot of questions for this game, like why is Poseimon one of the last tracks I unlock when it’s so dull and why does Dino Juice have a Jurassic Park design motif with a Danny Elfman inspired music track? Or why did I race the same track two different times in a single cup? But I don’t want to think about what the answers to those would be because I really don’t want to think about All-Star Fruit Racing anymore. If this were on mobile I’d have deleted it after my first trip to Avocado Roller. As it’s a PS4 game, I was holding to hope there’d be something, anything, I could grasp on to here that would signify it as a quality kart racer for the platform. There isn’t.