Board game, wheel of fortune, a vast narrative spanning thousands of years — 7 Grand Steps is a strange beast. Through simple slot machine mechanics, choose-your-own-adventure scenarios, and eventually actual strategy, one bloodline makes their way through a massive slice of human history, spinning a unique, if almost arbitrary, impersonal story.

One-more-turn syndrome — the deadly illness that turns minutes into hours and days into nights — drives the game forward, and I found myself still playing long after I realized I was actually rather bored. It’s as insidious as a fruit machine or a one-armed bandit, but deeper. Is it more rewarding? Well, you won’t end up with the chance of a big payout at the end, but the millennium-spanning narrative might be worth the ride. 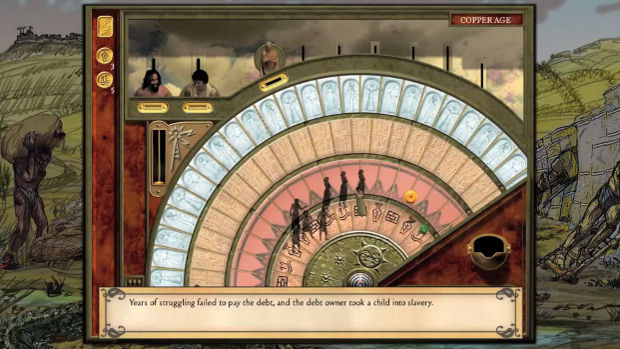 I am not a gambling man. I don’t play the stock-market, I haven’t played the lottery since my 16th birthday, and the last time I bet on a horse, I was nine years old and my father placed a £1 bet for me — I made £2 and called it quits. Luck is such a whimsical force, unreliable at the best of times, and I don’t like putting my faith in things that I can’t control.

7 Grand Steps forced me out of my comfort zone, for it relies on a lot of luck, it can be random and arbitrary, and that might be one of its biggest weaknesses. But often it’s grounded in simple rules and clear objectives. Herein lies the problem with this Wheel of Fortune- and Game of Life-inspired digital board game: I’m not sure what it is.

It’s a dichotomy, you see. Half of it relies on a straightforward set of mechanics rules: players take control of a single pawn, a person who will become the progenitor of a huge bloodline, and this pawn sits on an ornate wheel representing the period of history and their social class. The innermost ring of the wheel is the lowest caste, and the outer section is the nobility and ruling class.

On the left of the wheel is a coin slot, and beneath it are a variety of coins that represent certain fields of knowledge dependant on the era and the knowledge of the family. Initially, the coins represent simple things like foraging or masonry. Placing these coins in the slot will move the pawn to the nearest section of the wheel that also has that symbol — these coins will always move them to the right, further away from deadly crocodiles that sit at the left edge of the wheel, where it rolls off the screen.

Scattered among the various sections of the wheel are colored beads, these are legend markers, and to make breakthroughs like technological improvements (which add new symbols to the wheel and unlock new coins) or improve the pawns social status, moving them to the next ring with its different symbols and new challenges, these beads must be collected.

The pawn does not exist in isolation, however. Other families exist, and they too are attempting to collect beads. They are not simple adversaries, though. To gain more coins, special ingots can be fed into the slot, and these move the pawn backwards, towards another pawn nearby. When it lands on a section with another pawn, they interact, generating more coins for both parties. In this way, opponents are also allies, and integral to success.

At the start of each generation, the individual pawn can choose a spouse (who comes with a dowry) giving players two pawns to control, offering more chances to get new coins and collect beads. If the spouse had another suitor, that opponent pawn will become an enemy, attempting to halt player progress by being a complete douche. I’m guessing they show up at your house an inappropriate hours with inappropriate gifts for your spouse and always forget your name. 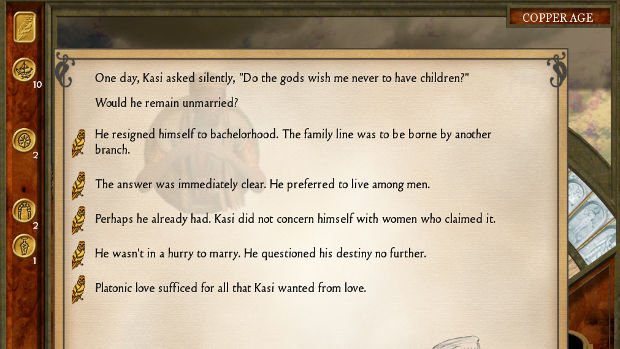 Couples can also have children, and while they are not present on the wheel itself, they should not be ignored. At the end of a generation, one of the children can be selected to be the new pawn, and their success will depend on how they were raised.

Coins are not just used to move pawns around the wheel — they can be given to children to further their education. All children start off with an F grade in every field of knowledge, but the more coins they are given, the further they advance, all the way up to AA. The better their grade, the more likely they will be able to generate the corresponding coin when they become an adult. It’s a tricky juggling act, ensuring that you have enough coins to both move your pawns, avoid death, collect beads, and educate your children.

This becomes especially difficult when you have a lot of children. Logic dictates that if you can only choose one child to carry on the bloodline, you should focus on educating them. Unfortunately, treating one child differently from the others will lead to jealousy and rivalry, and when they come of age, they will take their hatred out on the new pawn. I often found myself having coins stolen by my pawn’s brothers and sisters, impoverishing me just because they were angry over some perceived slight from years before.

There’s a lot to take in, though the mechanics are all very simple, amounting to spending coins and always moving forward. It’s all very objective-based, with preparing for the Great Challenge of the Age being the primary goal of each era. 7 Grand Steps implies that successfully overcoming this great challenge is easier if you invest in legends: unlocking new technology, performing heroic acts, and moving up the social ladder.

The latter seems especially important, as when you reach the ruling ring, a whole new gameplay style unlocks, allowing players to interact with neighboring civilizations, control the military, manage resources, and generally play through a text-based strategy game hidden within the board game.

Yet, when you finally reach the Great Challenge of the Age, it’s not at all clear what impact your earlier choices had. It is one of the many aforementioned choose-your-own-adventure-style scenarios, and these are the most baffling and poorly explained aspects of 7 Grand Steps, and they are also where we see the game’s schism, as it ceases to seem objective-based. 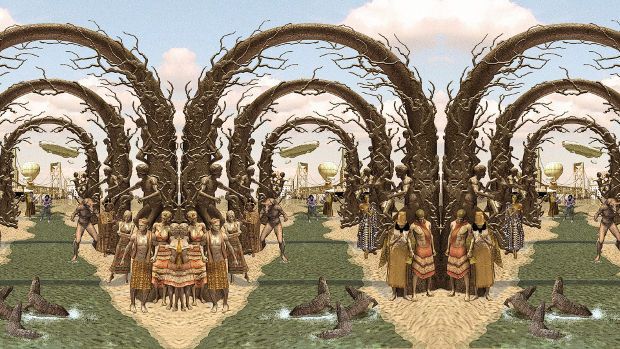 These text adventures crop up quite often, starting with each new generation. When a new pawn is selected, for example, a male pawn will participate in a coming of age ceremony, but the outcome of the ceremony is completely out of the player’s control, and it’s not obvious how much of it is random and how much of it has something to do with the way the child was raised. If he sneaks out of the ceremony, what does this mean? What impact does it have on the pawn? None of this is explained. Then players can choose how the pawn is known by selecting certain epithets, but they rarely have any bearing on the text that came before.

Likewise, similar issues appear during heroic events, where more choices can be made, but the outcomes again seem random or arbitrary and lack a defined impact. Going back to the Great Challenge of the Age, this is where these spotty text adventures lose all weight. The challenge dictates the future of your family and society, and plenty of choices can be made, but it’s incredibly easy to “fail” the challenge and end up continuing the story with another branch of the family. Why you failed the challenge and what you could have done earlier to avoid this is never explained or remotely obvious, and it all seems to be down to luck.

At least the challenges have a massive impact on the rest of the game, unlike the other choose-your-own-adventure segments. One failed challenge saw my family enslaved, entirely altering the flavor of the experience, making my story, at least for that era, all about attempting to free my family from the shackles of slavery.

Ultimately, both disparate elements of 7 Grand Steps fail to create a cohesive, enjoyable experience. The objective-based facet is intriguing and multi-layered, but without other players the competitive, social aspect feels hollow and is a missed opportunity. The expansive, over-arching narrative is fascinating, but the random nature of the text adventures makes the experience less than engaging, and at no point do the pawns ever become real characters, as their actions can be chosen on a whim, and they never go towards fleshing the members of the family out.

It is strange, then, that for all of its flaws, I found myself continually pouring those little coins into the hungry slot, obsessively watching history play out. I might not be able to name any individual pawns, but I can certainly recall the most important events that led to great changes in my dynasty.

I remember how a simple family of masons attempted to flee their city, knowing that a vast army was approaching, only for the powerful priesthood to trap them, forcing them to work on a great project until the enemy army took over their city. I can also vividly recollect the hard work and dedication of another branch of the family, hundreds of years later, trying to change their fate as slaves, only to become masters of slaves themselves. And I now regret the glee I felt when those once descended from slaves became wealthy, powerful rulers of a city, and did nothing but improve their own station and fill their coffers.

In retrospect, I like having this unique story to tell. However, I found little joy in actually playing it. Frustration, irritation, and boredom, sure. But little joy. I might have been better off playing the slots in my local, dilapidated amusement arcade. At least then there would have been a chance I could have won a few quid, and with my winnings, I could just have bought a book.