1bitHeart is a visual novel that was originally released for free by a mysterious individual known as Miwashiba (aka △○□×). There isn’t much known about them outside of their work as an illustrator and game developer. Nobody knows who they are. Maybe we never will. All anyone can really judge them by is the body of work that they’ve presented, and that’s a little refreshing in this day and age. Their games Alicemare and LiEat have both garnered positive reviews on Steam, but I haven’t yet dived that far into their catalogue. The one game I have played, 1bitHeart, is surprisingly good though.

The story revolves around a boy named Nanashi who is basically just your average socially-inept, teenage shut-in who doesn’t even bother going to school anymore. He not only has trouble forming relationships but keeping them as well. Then one day he goes to his room and finds an adorable, blue-haired, amnesiac woman who insists that he goes out into the world and make some damn friends. Seriously, that is pretty much the premise that starts everything. That is the one major overarching theme here. Don’t be a loser. Go make friends. It, against all odds, works pretty well too. 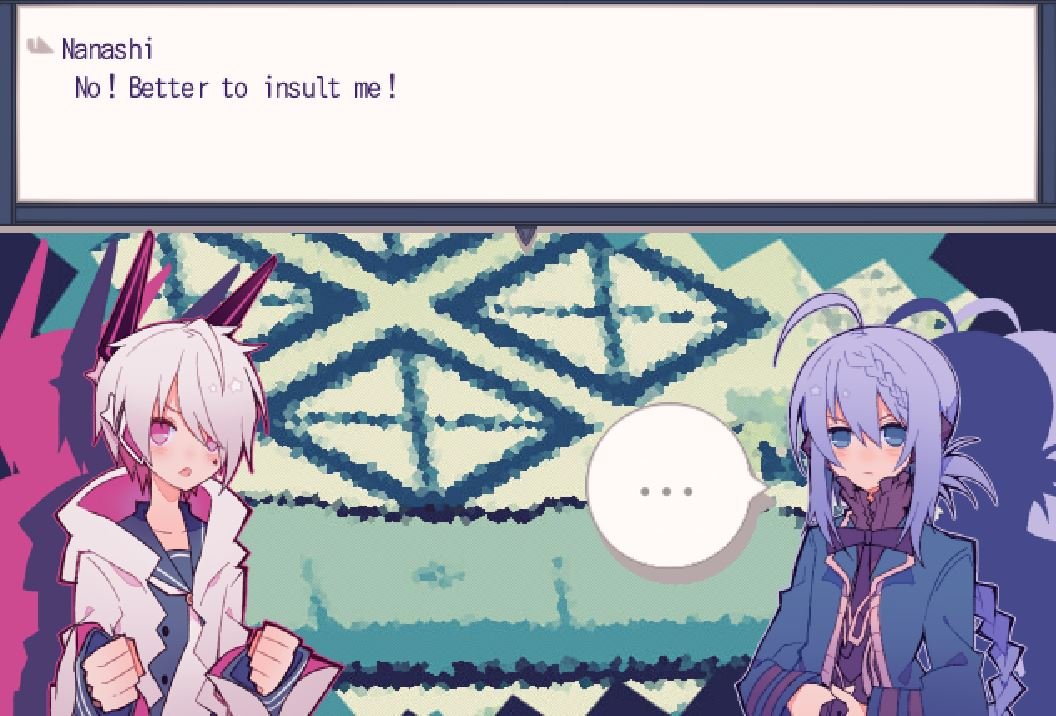 One of the things that took me off guard at first was the, more or less, complete lack of fan service throughout the game. Considering that it starts off with a cute girl who remembers almost nothing lying in your bed, I was pleasantly surprised. Don’t get me wrong now. I love goofy, hornball humor, but it is nice to have something different every once in a while. The whole game ends up being a lot more adorable as a result.

The vast majority of the cast are fairly disposable, but all the major players do a wonderful job of bringing you into the story. In fact, that’s probably my biggest gripe. It’s structured like a total rip-off of both the Danganronpa and later Persona series in that you are supposed to build relationships between chapters. These exchanges are, by far, the weakest part of the entire game. They’re already somewhat shallow encounters, but the only way to further these friendships is by purchasing items and gifting them to individuals. That eventually opens up dialogue into streamlined events that you have no real impact on whatsoever as a player. You’re just left hitting spacebar and reading text until you’re forced to cough up some more gifts in order to keep the conversation going. Like I said earlier, it’s a very shallow system that actually ends up detracting from the overall theme.

Luckily, the main story is pretty fucking cool. Basically, everyone exists within the realm of something known as The Master Program. Every character has a device called a Bitphone, which functions similarly to a modern-day smartphone, that’s strapped to the side of their head. The main conflict revolves around a group of hackers who are manipulating users’ Bitphones and attempting to alter The Master Program. Victims are left without any memories of what they’ve done during this time, and they’re used to carry out various tasks to aid the villains in their nefarious plans. How can you stop all of this? Who cares? You should go out and make some friends and stop being such a loser! As much as I disliked the act of making the friends during my free time, I found it really difficult to not end up becoming endeared to the game’s commitment to the concept. Once again, it’s pretty adorable. 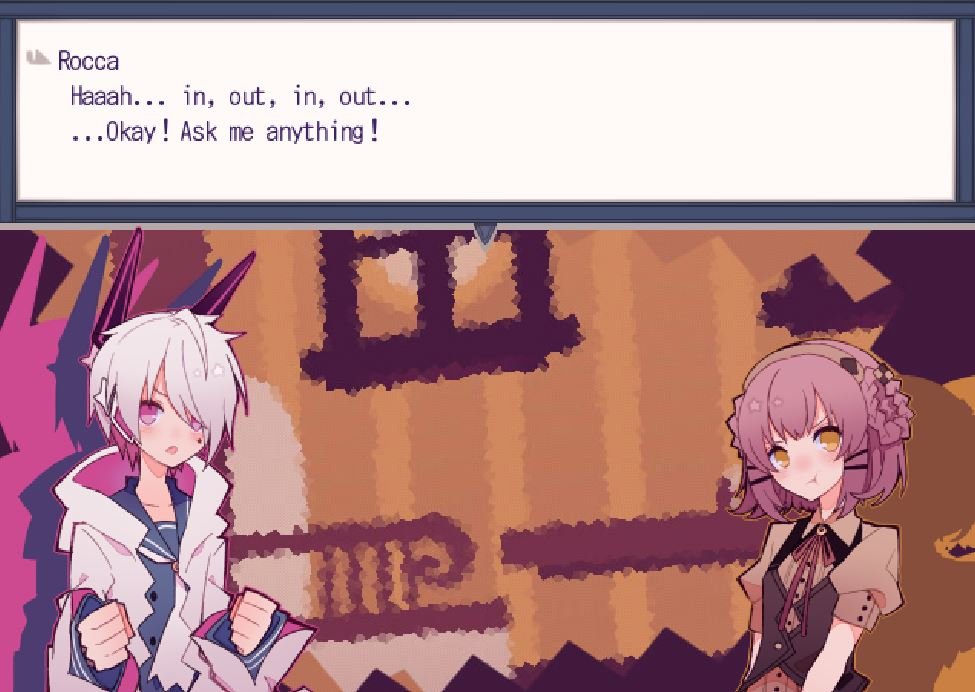 The biggest major gameplay element comes in a form taken straight from Danganronpa. During the main story, you’re forced into segments referred to as “Talking Time.” At the beginning, you’ll review all of your available clues. Then you are presented with three options at different points in a conversation: keep the conversation going, ask more about a particular topic, or “wait a sec!” where you confront them about inaccuracies in their statements. If you answer incorrectly, you’ll lose points off of your HP meter and restart from the last checkpoint during your interrogation. The whole system is incredibly forgiving though, and you’d be hard-pressed to actually see a game-over screen. 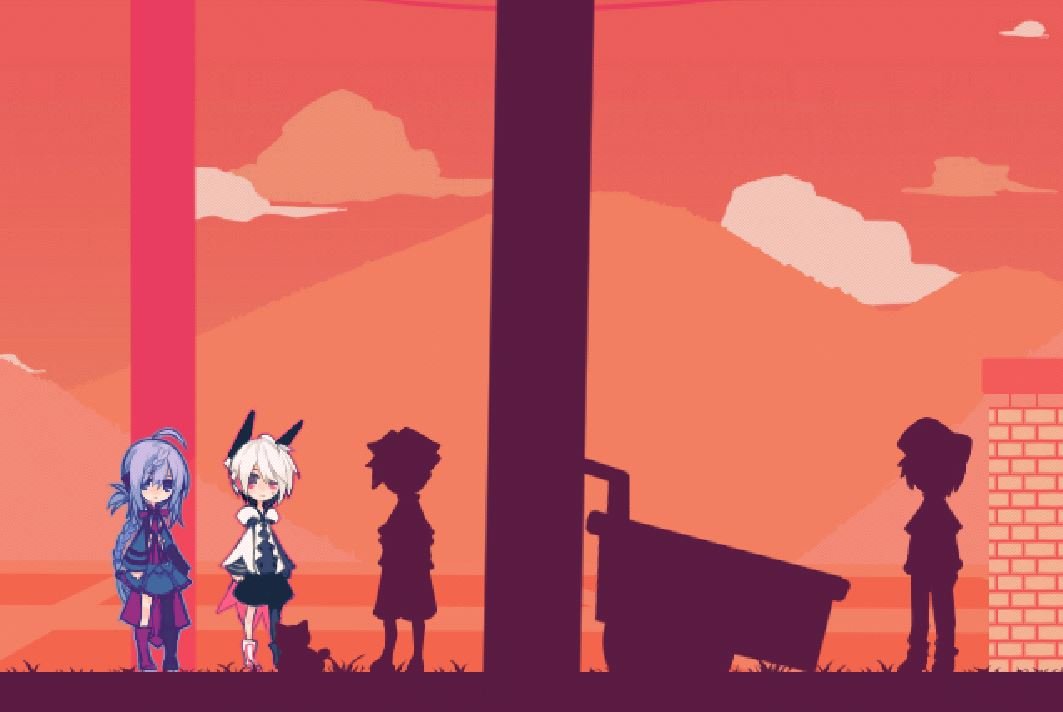 The artwork is minimal, but it works well within the context. Each area you unlock exhibits some new style that fits the characters who hang out there too. The soundtrack is, on the other hand, absolutely fucking phenomenal. There were exactly two songs that I wasn’t crazy about when I started the game, but I grew to love them over the course of my seven-hour playthrough. I’d even find myself humming them against my will while at work or out walking my dog.

In the end, 1bitHeart is a bit of a mixed bag. It does a whole lot really well, but there are definitely areas where it’s, undeniably, lacking. Considering the price of admission, however, it’s difficult to not recommend it.

I loved my time spent in this goofy, sci-fi world. It wasn’t perfect, but it was a wonderful way to waste a few hours. If Miwashiba ever decides to grace us with any more of these delightfully odd little experiences in the future, you can bet your ass that I intend to play them.