Fore (out of ten)

The best episode of Party Down (tied with every other episode) is “Not On Your Wife Opening Night,” in part because of its pitch-perfect community theater parody. There’s something honorable about the earnest “let’s put on a show!” mentality, even if the end result is less than stellar.

Yikes, what an on-the-nose comparison. 100ft Robot Golf is not a new episode of Party Down, which is the saddest thing I’ve ever had to write. Rather, the game feels like a community theater video game. Two people made this goofy video game about robots golfing and recruited their friends to help out — the fact that Robot Golf exists at all is really neat and speaks to the often loose, collaborative nature of the games industry.

Too bad about the game itself. The chaos implied by the imaginative title never fully materializes, instead leaving players with some fine jokes, obvious anime references, and a kinda crummy golf game. We’ve seen video games designed specifically for Let’s Players, but this is a rare example of a game that is best experienced through a Let’s Play. 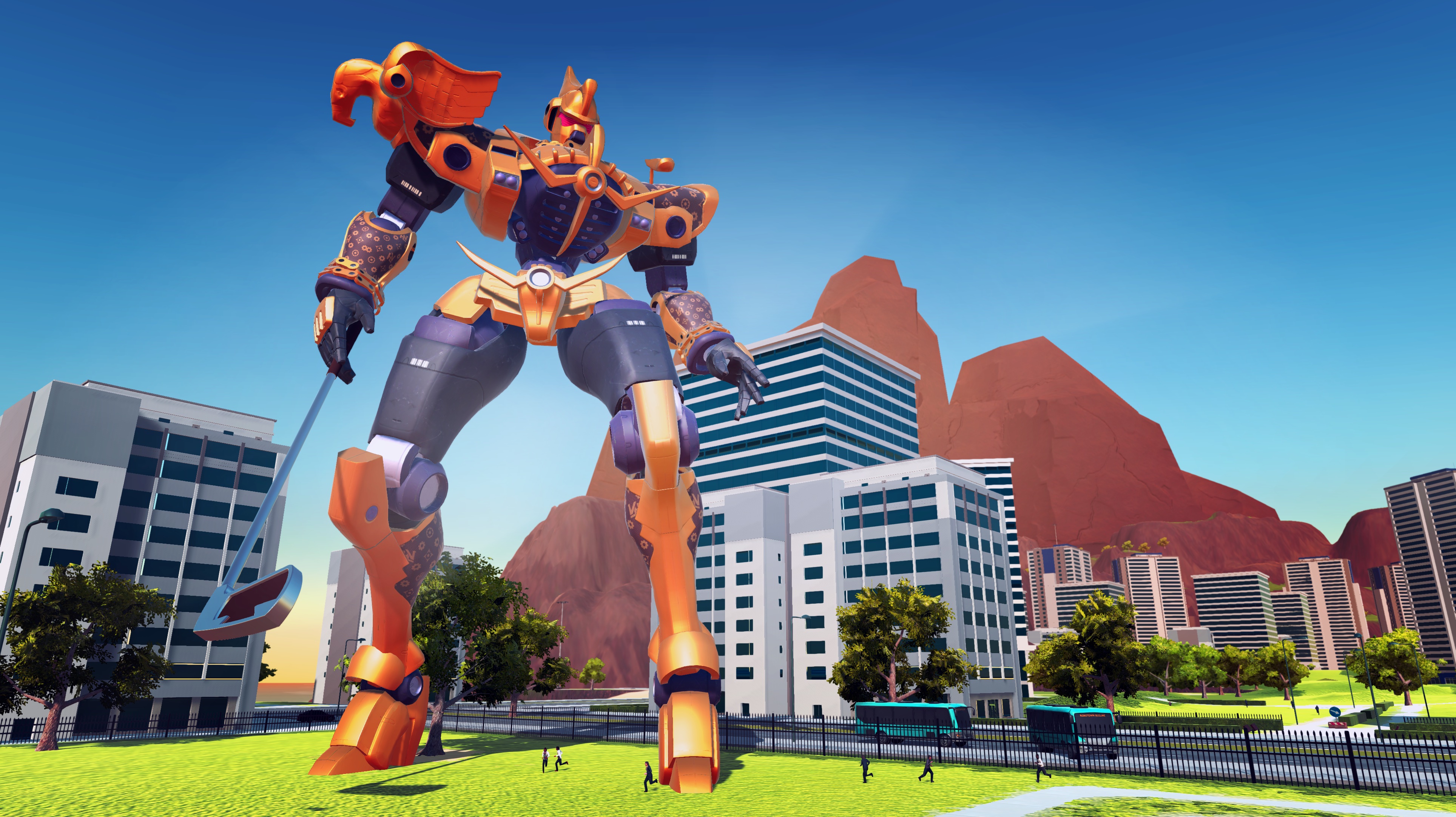 100ft Robot Golf’s largest (hah) problem is the eponymous mecha — there’s very little about the game that really takes advantage of these huge robotic golfers. Clearing a path to the hole by firing missiles at buildings is fun precisely once; after that it’s like eating your vegetables before you can move on to the next stage, where you are allowed to eat some more vegetables. Each robot has a certain type of timing minigame that determines shot accuracy, and nailing a 99% button press feels as satisfying as you’d hope. But there were so many times where a near-perfect shot (with no wind!) would veer wildly off the mark, putting me down for another bogey. Eventually, any satisfaction I once gleaned fell away in favor of good old frustration. The robots have super moves as well, but considering how little control I felt like I had over my vanilla shots, I rarely took advantage of their abilities.

The game’s default golfing mode is much better than its mechanics deserve, which invites a spirit of competition sorely missing from golfing games and occasionally grasps the potential hinted at by the game’s title. Two robots start playing consecutively and race towards the hole. You can try and play as quickly as possible…or you can wallop on your foe with your club, stunning them for a crucial few moments while you sink that final putt. If you’re feeling petty, you can even block your opponent’s shot with your body. It’s a really fun idea, and a hell of a lot better than the traditional “everyone takes turns” mode, where you can’t skip your opponent’s turn and the pause button doesn’t matter.

Of course, you don’t really need to hit your opponent — or even use any strategy! — when playing against AI, because the AI is horrendous. During a quickplay match, the AI kept hitting its ball directly into the water for reasons I do not understand. I once hit a triple bogey intentionally, hoping the AI would catch up and we could have a spirited match, but even that wasn’t enough to kill my sizable lead. I wouldn’t know what it’s like to play against real people, because I never managed to find a multiplayer match.

For some reason, the AI is much better in the campaign, but I’m not sure that I can wholeheartedly get behind that mode. It’s got a really fun ’70s anime vibe, some real Speed Racer/Kimba the White Lion-style visuals, but the voice acting is r-e-a-l-l-y bad. This is partially where the “community theater” thing comes into play — I’m inclined to be soft on these performances because cast is voiced primarily by game developers (some of whom I know and appreciate) and internet personalities, not professional voice actors. On the other hand, Robot Golf is a product that costs money, so maybe it’s not on me to use the kid gloves. Just turn down the volume during the cutscenes and you won’t miss much.

Thankfully, as a fan of The Adventure Zone and My Brother, My Brother, and Me, the famous McElroy brothers do a fine job as the game’s commentary team. Their jokes usually land, although you probably won’t need to hear many of them after you finish the campaign. Anyone who’s listened to a McElroy product will tell you the family’s energy is what makes their chemistry work, so it’s disappointing that all three brothers stick to their soft-spoken golf announcer schtick for most of the game. I get why they have to give that specific performance, but they’re not as funny as they could be (and have been). Still, a low-key McElroy is better than no McElroy at all.

Robot Golf has good jokes outside of the McElroys, like a giant golfing skeleton named Jeffrey. And the campaign does have some fine goofs, albeit delivered flatly. But the Evangelion references aren’t just played out, they’re obvious. The game hits all the notes, from “Get in the robot,” to a Gendo-like figure, to a “Congratulations” scene, to a group of corgi known as the “Fifth Child.” I’ll be the first to admit, I’m not fully learned in the many ins and outs of mecha anime, so it’s possible that I missed some real clutch references. However, as somebody who’s been around the Internet, I got the Evangelion jokes, because they are the jokes. The only jokes. The last stack of jokes anyone ever makes about Evangelion anymore, I guess. There’s references to stuff — one of the robots kinda looks like the Gurren Lagann robot, the dog robot looks kinda like a Megazord or Voltron — but that’s less “a joke” and more “an homage.” 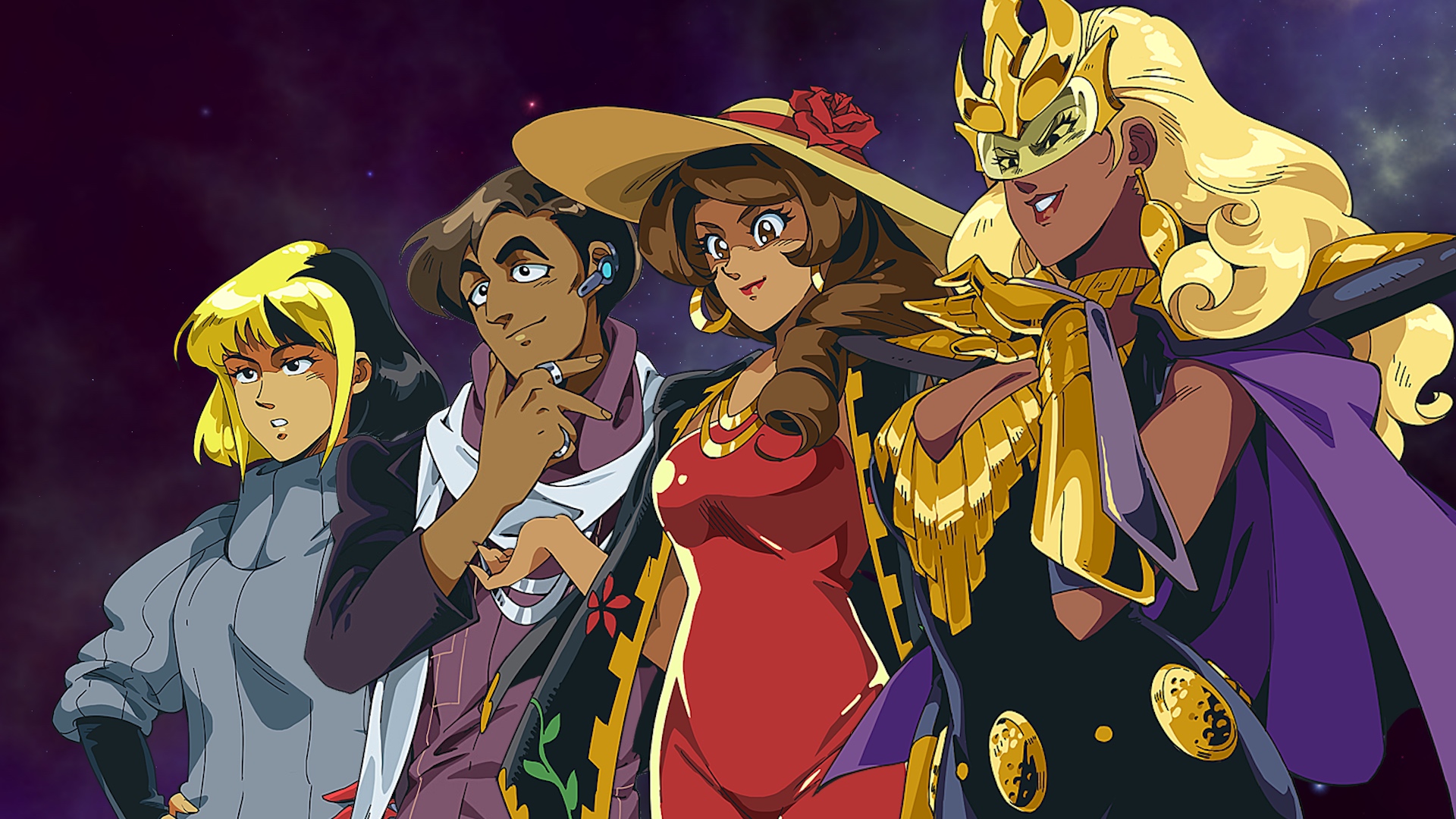 Have I mentioned that 100ft Robot Golf costs $20 yet? I should, because that’s one of the many reasons I can’t easily recommend this game. It’s best experienced secondhand, that way you can safely enjoy the game’s fun aesthetic and great commentary without having to pony up the cash yourself. Robot Golf could be worth a look if you’re absolutely wild for mecha anime or if you’ve been dying for a new golf game, but even then you should probably wait for a sale.

I feel bad about panning a game that I adore in principle — it’s scrappy and unabashedly enthusiastic, which historically has been my jam — so let me close by saying I appreciate where No Goblin is coming from. 100ft Robot Golf the idea is commendable, but 100ft Robot Golf the video game is a lot harder to appreciate.