I may be a bit short, definitely hairy, and somewhat stocky, but I’m also quite claustrophobic. I’m like a dwarf paradox. I do love digging out caves and carving out dungeons and fortresses, though, and I’ve been doing plenty of that in A Game of Dwarves.

We’ve taken a look at the game during a few hands-on sessions this year, but recently I’ve had free rein to go mad, construct my own little Moria, hoard precious gems and ores to my heart’s content. Unfortunately, my attempt was frequently threatened by monsters — much like The Lord of the Rings‘ most famous dwarven stronghold — and the lazy nature of my citizens. 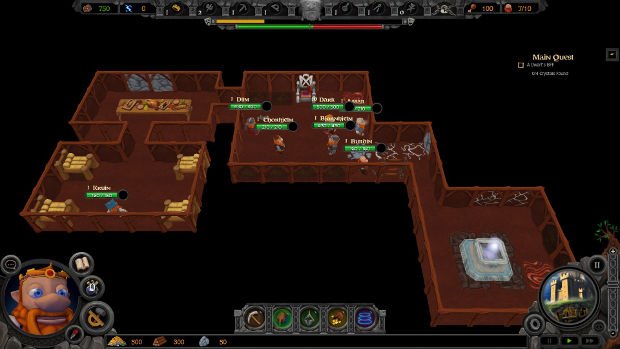 Welcome to Dirtburgh, home to seven dwarves — it can’t be a coincidence. I know, I know, it’s not much to look at. It’s just mud and wood, some rickety furniture, and my awesome throne. Without orders, my little hairy minions wander aimlessly throughout the settlement, though mostly they eat and sleep.

Every dwarf has a role: There are a couple of warriors, a worker, a crafter, a digger, a researcher, and even a dwarfling. The young dwarf just learns, he doesn’t actually work, but this education levels him up so that when you do force him into a career, he’ll be more productive.

As I got the lay of the land, I started to think about where I was going to dig first, and what I would find there. Gold, perhaps? Or maybe goblins. Gross. However, before I could put my peons to work, I noticed the once bountiful feasting table growing more and more empty — everyone was going to starve! Crisis! Heroically, I ordered my diggers to clear out an area of fertile soil, and I installed a fertility stone. I confess that I had previously assumed the object would be involved in the “creation” of new dwarves; I was completely wrong. Stone in place, I planted a couple of trees, one with fruit and the other for lumber, and I had saved the day. Damn, I’m good. 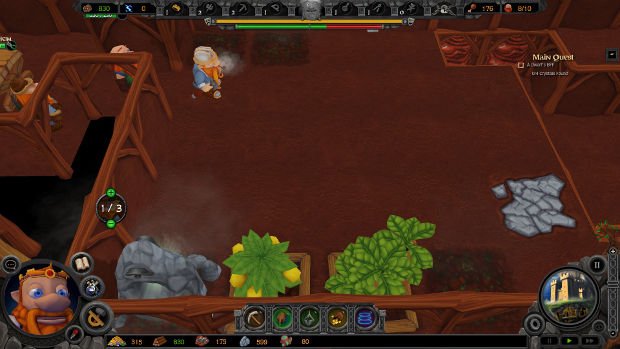 Finally, I was ready to start mining. I spotted some silver deposits in the most north-western part of my glorious kingdom and promptly ordered my single digger to make me rich. Every cuboid block of silver that was harvested revealed another, then I started to find stone and iron in great quantities. I worked that digger to the grave. Literally. He actually died. It really wasn’t my fault. He kept running back to the feasting table or to his bed, and so little progress was being made. So, being a very clever leader, I removed the ladder from the pit he had dug out, and kept him working down there despite his protests. When he turned into a gravestone, I was slightly surprised.

In honor of the sacrifices of that guy, whose name I have totally forgotten, I redecorated and made a proper throne room. I know it’s what he would have wanted. I made the now well-educated dwarfling the new digger, and we all got on with our lives somehow. In keeping with this fresh start, I ordered digging to commence in a new spot in the south. There was a secret room somewhere in that direction, denoted by the big purple question marks in the fog of war. Maybe we’d find something wonderful, like a really nice rug to tie my throne room together.

These rooms usually have monsters lingering within them, and I honestly wasn’t confident about the abilities of my warriors. They looked pretty out of shape, I’d never seen them fight, and all they did was eat and sleep all day. I needed to take charge and whip these dudes into top form. Obviously, I’d need help from an academic; who knows more about staying in shape and fighting monsters than a wise old sage? 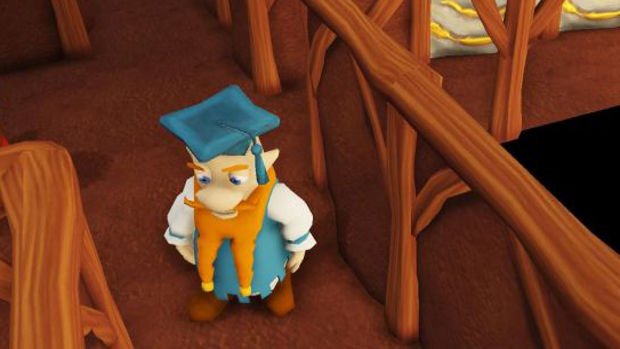 I was in possession of exactly one researcher. He was a creepy guy who spent most of his time staring at people, and despite his title he didn’t really have a job. That part, at least, was my fault, as I hadn’t gotten around to building the old chap a table for all his books and scholarly paraphernalia. My bad. I selected a random place in the middle of the floor and made my crafter earn his keep by constructing a sturdy table, perfect for unlocking the mysteries of science and, more importantly, warfare.

There are several pillars of research, allowing players to unlock upgrades for their minions, traps and defenses, and new items like torches and lanterns. I didn’t care about any of that, however, so I started spending my research points on beefing up my pitiful troops. Two soldiers, even hardy ones, don’t make much of a fighting force, so I summoned a dwarfling and added him to the ranks of my warriors. All the while, I had been doing up my digs. Masterwork stone everywhere! My minions rejoiced in their high class surroundings, and I got them to plant a lovely little apple tree to celebrate.

Despite being a tough-looking bunch, most of my dwarves were entirely incapable of defending themselves from goblins, spiders, or what have you. It’s not that they would run away and hide when faced with a foe — that would actually be preferable — rather they just wandered around, oblivious, until they died. So when my digger smashed his way through into that hidden room, I immediately teleported him to safety and sent in my axe-wielding warriors. They made short work (sorry) of the pair of goblins hanging out there and conquered the little room in my name. It had benches and a table… what a treasure. 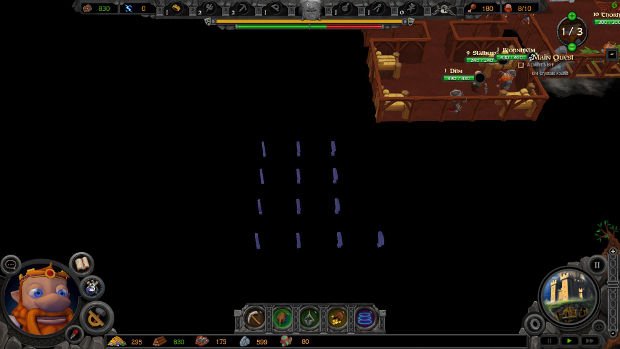 While the victory didn’t really result in the riches I’d dreamed off, it had provided experience for my troops, who I specialized into two berserkers and a spear-thrower, and a new room that I just discovered I sorely needed. You see, my once work-shy peons had developed almost German efficiency, and now I was running out of storage space thanks to all the surplus materials. After a spot of interior decorating and chest manufacturing, the goblin chamber was transformed into my new storage room/guard post. The excitement was almost too much for my dwarves, who all went to bed.

To the east were more purple question marks, spinning alluringly. I must have them, I yelled to my neighbor through the wall. It was 2 AM and I was still building. My neighbor gave a supportive bang on the wall, and I got back to business.  I opted for a more cautious approach this time. More specifically, I opted for an approach that involved the new traps my researcher had just unlocked. At my disposal, I had some nasty blades which snapped out of the floor and some arrow traps for the walls. It was going to be a blood bath.

I constructed a corridor of death covered in devious traps, each requiring a separate generator which I locked behind wooden doors just in case the monsters tried to shut off the power. The room was one floor down, so I was able to get a good look at my enemies from above. Four goblins, all relatively high-level — it was a good thing I’d built those traps. The wee green beasties were too stupid to build anything, so they were stuck bellow. To help them along to their death, I kindly placed a ladder for them to clamber up, right into my waiting arrows and blades. 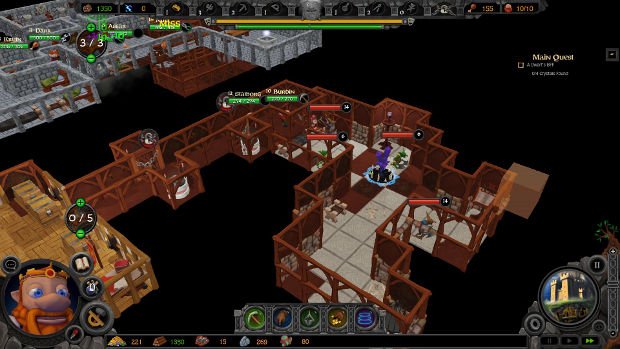 Things didn’t quite go to plan. The first thing the goblins did was walk up to the first door protecting a generator and smash it. The door remained standing, but the generator was inexplicably gone. These green menaces kept doing this, and only one trap actually did any damage. When they burst through the door into my storage room, they were almost at full strength. Luckily, my stalwart warriors didn’t care and rushed into battle. It was hard fought and hard won, with zero casualties on my side. Another heroic victory for yours truly.

All that was left for me to do was inspect my latest acquisitions. Some broken furniture, crappy lighting fixtures, cobwebs, assorted rubbish, a priceless crystal, more rubbish… hang on a minute! The glowing crystal was one of four scattered throughout this subterranean realm, and it had been my quest to discover them, a quest I had been ignoring up until now!

My dwarves were content, our home was coming along nicely, and we were well defended and rather educated. There were still more battles to be fought and treasure to uncover, but I’d managed to make a cave a home.

A Game of Dwarves launches for PC and Mac on October 23.