There will be blood… and lots of it. The Lord of the Rings: War in the North sets to dismiss the stench of mediocrity that has befallen one of literature and cinema’s finest franchises in the videogame realm. Past games have been hit or miss — partially due to the usual movie tie-in fate that rushes development cycles, but also due to the fact that the The Lord of the Rings’ book and movie rights, in past, were under license from different entities.

Thankfully, we don’t have to deal with that nonsense anymore. With WB Games holding the rights to both the movies and novels now and without the presence of a film to coincide with its launch, The Lord of the Rings: War in the North appears to be what fans have been waiting for: a deep, action-centric affair set in the heart of J.R.R Tolkien’s fantasy epic. Oh yeah, and it also doesn’t hurt that folks who brought us classics such as Baldur’s Gate: Dark Alliance and the Champions of Norrath series, Snowblind Studios, are helming the charge.

With just a mere week away before launch, I was able to take a final look at this three-player co-op fest. 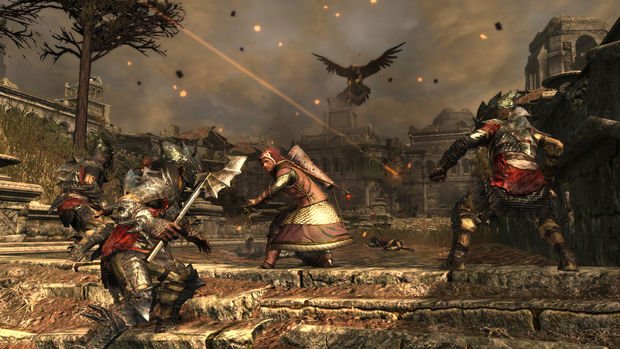 My adventure began, fitting enough — as I am a stout man sporting a beard — with Farin the Dwarven Champion, a Gimli-esque warrior who is all about smiting and mitigating damage. Paired with Eradan the Human Ranger, and Andriel the Elven Loremaster (played by fellow members of the gaming press) we cooperatively made our way through the goblin-infested stronghold of Fornost.

The path was straightforward, but we pressed forward into the first wave of soon-to-be cannon fodder.  Wielding a two-handed sword (Where’s my axe?), slashing apart the denizen forces was instantly rewarding. Melee combat is quick, visceral, and highly satisfying as you watch the blood douse your armor. Though combat is essentially relegated to two buttons — one for light and another for heavy attacks — each character also possesses a ranged weapon — a crossbow, in my case — to further mix up the offense. If you’re familiar with the top-down hack and slash fests that put Snowblind on the map, you’ll feel right at home with War in the North.

In fact really the only thing that has changed from Snowblind’s previous action-RPGs is the viewpoint from which War in the North is played from. An action-driven third-person camera provides more immediacy to the tensions at hand. With this more personal vantage point, each character is free to explore the surroundings for loot and hidden treasures without the limitations of being fixed to the host’s screen. My only gripe with the camera is that it, at times, left me susceptible to enemy flanking, but this became less of an issue once I was accustomed to rolling successfully out of harm’s way. 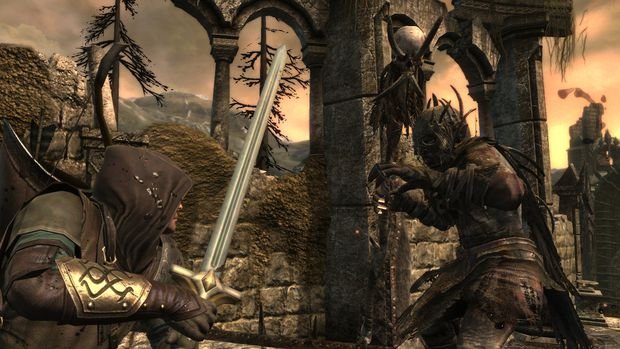 Outside of the camera though, not much has deviated from Snowblind’s tried and true path of delivering addicting loot-collecting, hack-and-slash adventuring. There are five different levels of loot to pillage from and weapons and gear even contain sockets to add extra attributes to their standard statistics, such as elemental damage and bleeding effects.

Loot dropped is unique to every player, so there is never a need to race for the rare item. You can trade items amongst players or even sell them at certain “shop” locations found per level. There is no weight encumbrance to worry about, but there is a predetermined number of slots for carrying gear — providing ample storage.

While War in the North does limit itself to just the three predetermined characters — forgoing a character creator — the amount of customization available should provide adequate depth to allow for the play style of choice. After leveling up during combat, I was afforded the opportunity to gander at just how the character progression system works. Typical to this sort of fare, a few points can be allocated to improve certain attributes — i.e. strength and defense — followed by the upgrading or purchasing of a new skill.

Each character skill tree provides three branching paths, and from what I was told, only one would be able to be fully completed by the time the campaign concludes. Fear not, those who must have the most complete and well-versed combatant, as War in the North contains a new game plus and even a new game plus plus with more challenging difficulties — which I can attest should be a trial. 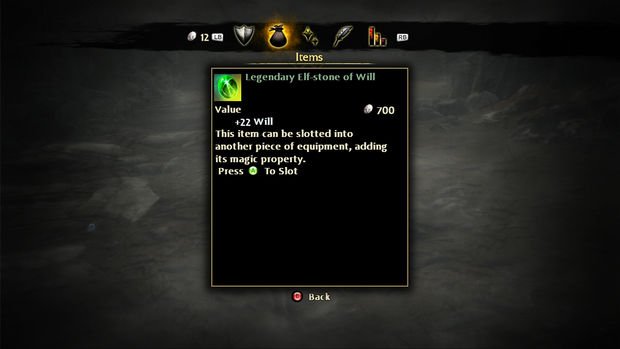 After my fellowship made it through Fornost, we skipped ahead a bit into the dank caves of the Barrow-downs. If you remember the part in Return of the King where Aragorn, Legolas, and Gimli venture into the Paths of the Dead, you’ll have a good idea of what to expect esthetically. It was here also that I began to understand how imperative strong cooperative play is for War in the North.

As we fought the vile undead that make refuge in the Barrows, we were tasked with working together to defeat both the level’s mid-boss and final boss. While the end boss consisted more or less of making sure no one perished and focusing our offense in unison, the Barrow’s mid-boss was a shining example of using all three character’s proficiencies.

While our nemesis stood off in the distance, hurling boulders and powering up nearby enemies, our communication was paramount to our success. Having Andriel protect us with her shield bubble — which had been augmented to heal us on top of block projectiles — I took it upon myself to agro the nearby enemies so Eradan could use his bow to pick off the mid-boss. Had we not worked together so cohesively we may have easily fallen in our attempt. In fact a few times we were close to death, but each character is offered some time to be revived by fellow players before a mission is failed.

After we wrapped up the Barrow-downs, we stopped off at on the game’s hub location, Rivendell. It was here we actually met up with many of the main characters from Lord of the Rings trilogy — all of which resemble their likenesses from the films. These characters serve as story drivers and some even offer additional side quests to further the adventuring. From theses hubs, previous areas can be revisited to find any missing secrets or to finish up incomplete side quests.

While The Lord of the Rings: War in the North doesn’t bring a whole lot new to the genre, Snowblind has appeared to update its classic gameplay for a modern generation — engaging, team-focused co-op surrounded by the addiction of loot and hack and slashing. I’m frothing at the bit to get more time with War in the North as it definitely feels like the Tolkien-esque experience gamers have been waiting for.