Its been fourteen years since Peppy first told us to do a barrel roll on the Nintendo 64. Now he and all your other space critter friends are back, in another dimension to boot.

The original Star Fox 64 introduced a bevy of new features, such as fully-spoken voice acting and full three dimensional graphics. The remake follows suit, and asks you to get into the cockpit one more time and take to the skies using the new features unique to the 3DS. 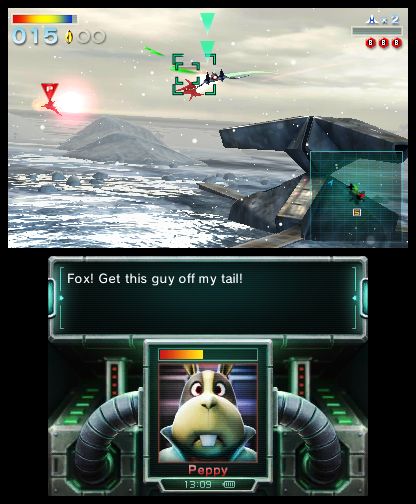 The first and most notable change to the remake is it’s graphical overhaul. I’ve always considered that the fifth generation of consoles the ugly stepchild in terms of graphics, because let’s face it, all the obtuse polygons attempting realism when realism was still way out of reach sometimes resulted in terrible visuals. Thankfully, the 3DS is very capable, though, and lends the game detail and depth a bit more in line (but not quite there) with what Star Fox Adventures offered visually. Water, specifically, is particularly impressive as it shines and glimmers as the waves rise and fall.

True to form, being the graphics junkie that I am, I marveled over the visual update while my Arwing was getting its butt kicked by my rivals. Star Fox 64 3D features a local wireless multiplayer that allows up to four people to play off a single cartridge. There are different modes available depending on how you like to play multiplayer matches. There’s a mode for points (first to X amount of kills wins), and a mode based on a time limit, for example. Each of these can be configured to define preferences within that mode, from level select to specific win conditions within that mode. Someone like me, who is terrible at the game, might be interested in knowing that handicaps can be set.

Once those things were decided upon, I was able to experience some of the new features in the multiplayer. I tried out the gyroscope controls, which allow you to direct your aircraft by tilting the 3DS. This might be of interest to those of you that tend to really get into your games and tend to physically move in the same direction you are commanding your avatar. I phrase it that way because I didn’t find that the option added something that the normal controls didn’t already provide in a more precise format, nor did I notice that anyone playing the game actually used these controls despite having the option. Still, the option is there should that be your thing; it’s not mine so it made no difference or impression upon me after trying them out for a bit. 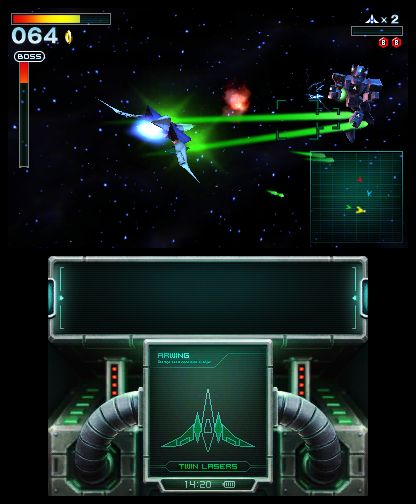 Fellow combatants on the battlefield are particularly visible given that every aircraft has a face attached to it thanks to the 3DS camera. While a seemingly inane inclusion, seeing your rival’s mug every time they destroy your ship definitely fuels the competitive spirit. The winning screen is of particular note, because the crowned winner has the opportunity to gloat over the poor, unskilled plebs in fourth, third and second place.

Combat is fast-paced and intense. Players fly about the landscape while picking up power ups, which give you special ammo and abilities, and can also collect rings to restore health. Having humans at the helm means that actually hitting someone else can sometimes be tricky, though thankfully players have the ability to lock onto other ships. Still, with rings to restore health and power ups such as a force field at your disposal, taking someone out isn’t always simple task, especially if they know how to fly an Arwing half-decently.

Aside from multiplayer, there’s the ability to play something like a score/time attack mode. Stages are denoted by planets and can be visited in whatever order one wants. Like most modes similar of this ilk, players can revisit earlier stages and attempt to achieve higher scores or faster times.

So far Star Fox 64 3D is looking like a solid, if not safe revisit of an earlier classic that offers a few new features in a prettier, but still familiar package.