In case you were wondering, that silver line in the right half of the header image above is Ryu Hayabusa’s katana. It’s a long samurai sword, and I couldn’t fit all of it into the picture. That sleek blade is the last thing that many of Ryu’s foes ever see — if they see it coming at all, that is.

In “The Way of the Ninja,” the first chapter of Ninja Gaiden Sigma Plus, Ryu deftly wields his sharp-edged instrument of death, effortlessly slashing lesser samurai. It’s not surprising that his exertion seems minimal; this isn’t his first time around the block. Sigma Plus, a PlayStation Vita launch title, is a port of a 2007 PlayStation 3 game, Ninja Gaiden Sigma — which itself was a port of the Ninja Gaiden title that launched on the Xbox in 2004, and was re-released on that platform the following year with additional content.

Confused yet? That’s not even all there is to Sigma Plus.

Although it’s been eight years since Ninja Gaiden came out on the original Xbox, the source material for this port of a port remains a veritable classic, and an Itagaki-less Team Ninja has achieved a mostly smooth transition to the Vita. The handheld’s dual analog sticks are key for a third-person action title; camera control is paramount in a game where ninja frequently sneak up on Ryu from behind. And its snappy face buttons do their job, holding up to the assault from your fingers as you furiously enter combos. I never felt like the device got in the way; success or failure depended only upon my skill, and that’s how it should be.

You’ll need some new skills to do well in Sigma Plus, though. Sigma launched in mid-2007, a time early enough in the PS3’s life that developers were still shoehorning motion controls into their games. In that game, you could shake the Sixaxis to make Ninpo (magic) attacks more devastating. As a Vita launch title, Sigma Plus is similarly tasked with exploiting its platform’s various abilities. Team Ninja has shifted Ninpo powering to the rear touchpad, while adding gyroscope support for first-person aiming and touchscreen controls for launching projectile weapons. None of this stuff appears in the first chapter, which is all I played, so I can’t comment on its implementation. Oh, and it’s all optional, thankfully. 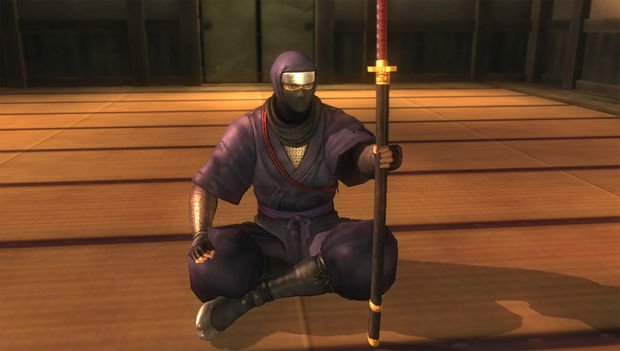 If you’re having trouble with the exacting combat, you now have a couple of options. Practice sessions come in the form of Ninja Trials, 76 bite-size challenges in which you can hone your skills on the go. But in case you want an easier experience overall, feel free to choose the new “Hero Mode” difficulty setting, which automates dodging and provides unlimited Ninpo. Another first is Trophy support, since Sigma came out before PSN Trophies existed.

As you can see from the trailer and screenshots here, Sigma Plus is showing its age. It doesn’t look bad per se, but it’s clearly not up to par with the best that the Vita’s launch lineup has to offer. Texture detail is lacking throughout, and environmental effects such as flames look simplistic. Luckily, the game retains its trademark fluidity; I experienced no frame rate issues.

If you’ve already completed Sigma, there may not be a lot for you to do in Sigma Plus. But Team Ninja has designed this port with an eye toward accessibility, so folks who might have been turned off by Ninja Gaiden‘s renowned difficulty have a reason to check it out. Look for a full review from Dale later this week.