About fifteen minutes into my hands-on with thatgamecompany’s Journey, I realized that the odd sense of déjà vu I was getting was a feeling I hadn’t experienced since I was about seven years old. The Super Nintendo was the very first console I owned, and it opened up whole new worlds I never could have imagined. Games like Super Mario World felt like grand adventures that blew my young mind and left me in such a sense of awe.

I think the same goes for everyone when they first experience a videogame at a young age. Now that I’m older, games rarely, if ever, leave me with similar feelings. That’s not to say I don’t get immersed or don’t have fun with games — far from it. It’s that growing up surrounded by games (and even having multiple jobs to do with gaming) has gotten me used to the basic formula everyone uses. There’s a standard for every game, whether it’s obvious or not.

Journey, however, made me feel like I was exploring something completely fresh again. You’re put into such a big, beautiful world with no direction or understanding of what’s going on, yet you’re compelled to press forward.

The journey begins with your main character in the middle of a vast desert. You have no idea why you’re placed there and there’s no direction given at all of what you’re supposed to do. So I did the only reasonable thing and just walked around admiring the environment. The sand is displaced with every step you take with such extreme detail that you can see individual grains of sand move.

The environment is huge, and all you can do at first is simply walk around and sing. Pressing the circle button will make your character sing; she will sing differently based on how hard and fast you press down. Holding the circle button will cause your character to build up a big scream-like noise and unleash a small wave of energy around her. Her singing is akin to that of a bird chirping and I found myself just casually making her sing while I moved about; it was quite entertaining. 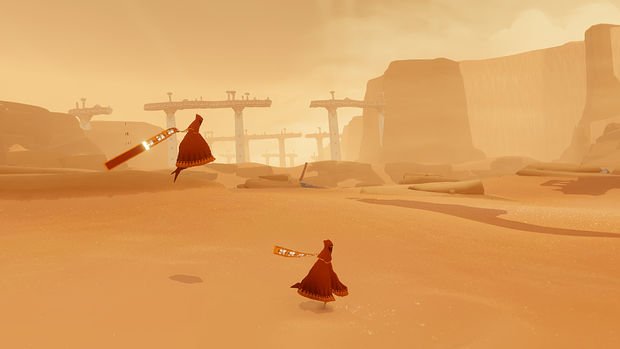 Soon I was able to outfit my character with a scarf. The scarf allows the player to jump into the air and glide around, but each use of the scarf drains its energy. Players will find groups of scarves flying around in the desert; calling to these flying scarves with a song when near them will cause the scarves to lift you into the air and refill your scarf energy.

You’ll only be able to jump-glide once, but you’ll find white glowing energy balls that will extend your scarf’s length as well as the amount of jump-glides you can perform. I played through the first three levels, and the scarf was rather long by the end of my session. I can only imagine how long it might get by the end of the game.

After getting used to the jumping and gliding for a bit, I found a marking that caught my eye and went to investigate it. Games tend to make your goals or path painfully obvious, but Journey goes about it differently: it relies on how the curiosity of the player. You’re in a massive space, but there will be points of interest scattered throughout the world that will seemingly draw you to them. 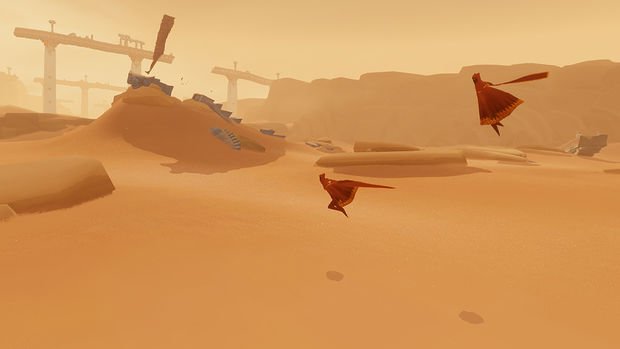 Still, if you find yourself getting lost, the world has a natural barrier to set you back toward the right path. You’ll find that the there are strong gusts of winds surrounding the levels; they push you back and cause you to tumble to the ground. It took me about three tries of walking into the wind to realize that this is basically Journey’s version of the classic invisible wall. Watching my character fall each time was a little funny, until I realized you actually have no arms. Then I felt a bit bad, actually.

The next level continues by giving you your first real challenge. There is a bridge you need to cross, but it’s been destroyed at multiple points. I made my way to the gigantic carpets attached to rocks around the level. Going up to the carpets and singing to them released a swarm of small scarves that made their way to the bridge, creating a path for me to cross.

Once completed, I crossed the bridge and came face-to-face with a figure that looked like my character, but was much bigger and had a white aura surrounding her. My impression was that she was some sort of goddess. I encountered this goddess a few times, and each interaction with her caused my cowl to fill with hieroglyphic art. Eventually your entire cowl will become decorated, and this process increases the size of your cowl, too. You’re also presented with a little story, but it won’t make any sense. 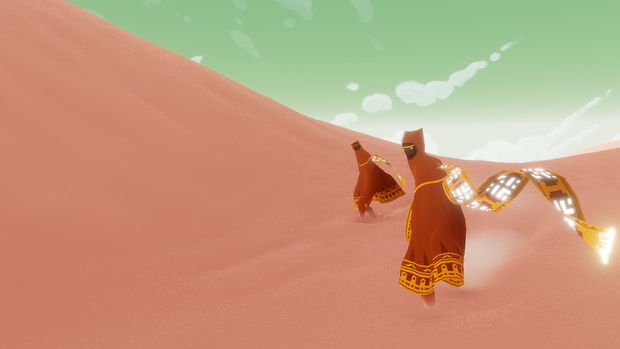 The next area saw me in more desert lands with plenty of huge hills lying around. Your character slows down when climbing up steep hills, and actually slides down them. You can slide around even on flat surfaces if you have enough momentum.

Soon I came across a new type of scarf creature, this one in the shape of a kite. It reminded me of Carpet from Aladdin — it actually interacts with you and is full of life as it flies in the air. There was no obvious path to go but I soon realized that I was supposed to follow my new friend (let’s just call him Carpet). Carpet kept a nice pace ahead of me but would slow down every now and again when I was falling too far behind.

Eventually Carpet led me to a place where I helped release several mini-Carpets. It almost felt like a family reunion. The Carpet gang continued moving forward, and I even caught a ride with them from time to time. 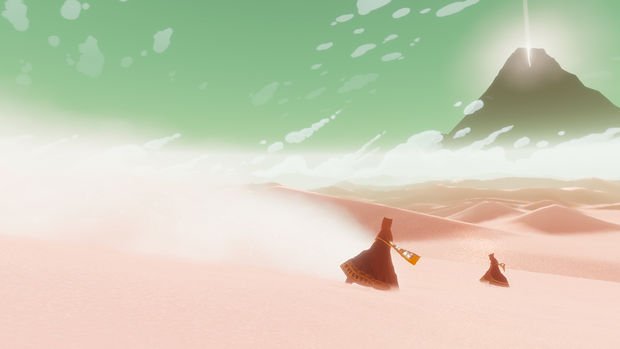 The Carpets led me to a large building shrouded in darkness. Something about this building instilled a feeling of instant dread, but that didn’t last long — the demo ended right before I could explore the place.

The desert isn’t the only place we’ll be exploring; there are multiple environments planned. Based on the trailer from last year, we at least know to expect a snow-based section.

If I have one complaint with Journey, it was that the camera controls are tied to the Sixaxis movements. It was rough getting the camera to spin in the way I wanted it to. This issue only arose when I just wanted to take in the environment. Otherwise, the camera is very good at staying with you if you don’t mess around with it. I’d prefer the camera controls to be mapped to the joystick, and thatgamecompany is still evaluating between Sixaxis and joystick controls. 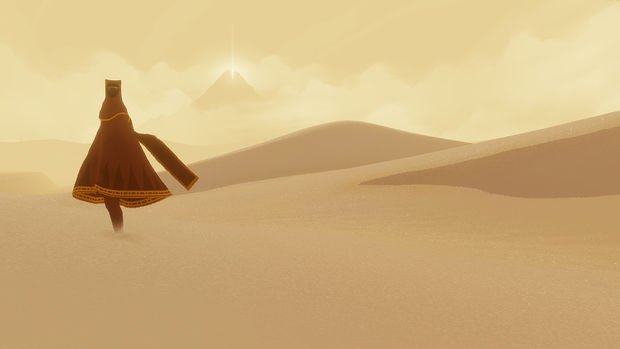 Journey is also going to have co-op, but not in the traditional way. thatgamecommpany is re-imaging how gamers will play with each other. You will be able to play through the game entirely by yourself, but along the way, you may come across other people on the same journey as you.

You can completely ignore others or help them; the choice is yours. There is no voice or text communication and you won’t even see a person’s PSN ID tag. The only means of communication will be with the singing button. This even means you can’t play with PSN friends, either. You won’t ever know who you’re playing with.

thatgamecompany is challenging the idea of what it means to play with others online and wants to give a new take on the experience. The studio’s creative director and co-founder, Jenova Chen, stated that they’re approaching the online experience like this because they “find that the majority of console online game today is about competition. While it does connect a lot of people together, a majority of time they’re focusing on executing the power in their hand rather than focusing on trying to understand or trying to really read the other player.

“So we wanted to create an environment where you actually want to pay attention to the other player.”

Sadly, there were some technical issues with my hands-on session, so I couldn’t see exactly how this online experience actually works. Journey will be at E3 next week, so we’ll give it another try to see what the co-op is all about.

Regardless, I was blown away by what Journey is. The game is just stunningly gorgeous and what I played was mesmerizing.