I didn’t have the highest of hopes going into the preview for Max Payne 3. I love the series, and though I know the latest has been getting preened and primped by Rockstar to match the caliber of their games, initial impressions of the game’s story and the transformation of Payne’s character had me more than a bit worried. Mostly, when I had heard about the implementation of bullet-time, I imagined it would be handled in much the same way as in Red Dead Redemption, and that there would not be much to distinguish it from other Rockstar properties in that vein.

It seemed like the Max Payne series was being more or less ‘Rockstarized,’ and since the series is a highly stylized — and more importantly, a unique — experience, I was concerned that Max Payne 3 wouldn’t retain the same awesome noir character that made the earlier titles in the series such singular endeavors.

Then I actually got my hands on the controller for some extended playtime. 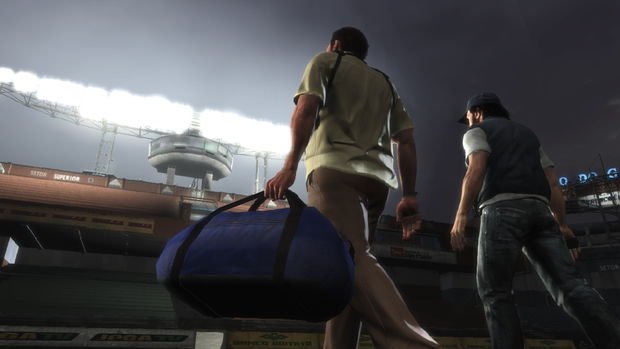 Max and his acquaintance Raul Passos enter a soccer stadium in Sao Paulo, Brazil, planning to pay off a ransom to a group that has kidnapped the trophy wife of real estate mogul Rodrigo Branco. Unfortunately for Max, things get muddled when an unknown third party takes Fabiana Branco and leaves Max with a sniper bullet in his shoulder.

I took over here, and as I pushed an injured and slightly hallucinating Max along the dim hallways of the stadium, it became apparent that most of the Max Payne series’ standout qualities have been retained. While the story is no longer told in static comic panels, it is still conveyed with great stylistic flair, including direct narration and witty one-liners from Max. Cut-scenes bleed into gameplay, and the storytelling keeps a graphic novel perspective. Words stand out boldly on-screen as they are narrated. The story moves through a series of flashbacks that take place in New York, and the cut-scenes often transition seamlessly from present-day Sao Paulo to New York. Unfortunately, I didn’t get a chance to check out any New York levels, but I did get a peek at how the storyline would integrate the present and the past. 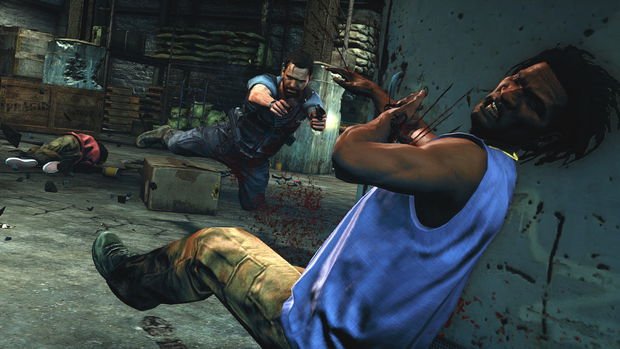 As I reached my first large combat scenario in an abandoned training room, Rockstar representatives began to tell me how to effectively use the newest iteration of bullet-time, and it took a few tries deflating a lone soccer ball before I really got the hang of it. You can go into bullet-time at any moment by clicking down on the right stick; as a result, time slows down and frenetic combat situations become much more manageable. One thing that was immediately noticeable was that the game really encourages bullet-time, as aiming becomes a much more refined affair in this mode. I noticed that when I tried to play the game like it was Red Dead Redemption, my gun had a much weightier feel to it, and I would often swing wide of my target and miss it entirely, spraying a random set of lockers with my bullets instead.

This strategic use of bullet-time really makes Max Payne 3 shine. A fair bit of criticism has been aimed at earlier Rockstar efforts because of their cover-based shooting mechanics, where it felt like you basically used the exact same strategy in every combat scenario. You’d find a good place to duck down, and then pop up and try to hit dudes who were little tiny heads popping around cover. Max Payne 3 truly flips this conceit on its head: I found cover rather ineffective, as enemies would often either rush me or flank me, making it difficult to return fire as my reticule swung wildly. Instead, the real rush of combat in this game comes from actually running headlong into a room full of bad guys, switching on bullet-time, and then using your weaponry and every environmental object at your disposal to take care of them all. It’s like a much more evolved version of John Woo’s Stranglehold. 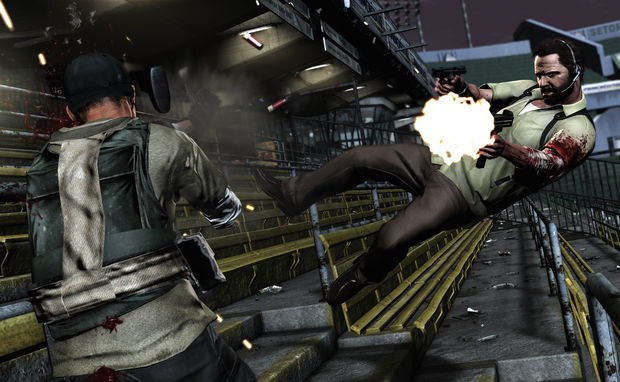 Bullet-time, and especially the shootdodge mechanic that you can initiate by running in any direction and pressing the right bumper, can be a glory to behold. With the Euphoria engine at play, Max actually moves quite realistically. He actually twists around in the air (or while prone on the ground) as he aims in every direction. My favorite move would be to run into a room of bad guys, initiate the shootdodge mechanic with a flying leap, and then flip around, shooting everyone in the room as I flew backwards onto the ground. Sometimes Max would even shoot under one of his legs in one smooth natural motion, which was both hilarious and awesome at the same time.

As you use bullet-time, you can press the A button (on the Xbox 360 controller) to slow time down to a near-standstill, and whenever you kill the last enemy in the room, you’re treated to a final kill-cam that lets you watch as the blood splatters realistically out of a dude’s head while you’re still pumping him with bullets. This seriously never gets old, and I found myself abusing the mechanic as much as possible.

I continued through the stadium, shooting bad guys with dramatic flair. As I reached the actual stadium stairs, I decided to get really clever and leaped into the air above a bunch of guys hiding out in the bleachers below me. I managed to take down four of them before hitting the ground with a brutal thud that caused everyone in the room to laugh and reminded me that physics were still at play. 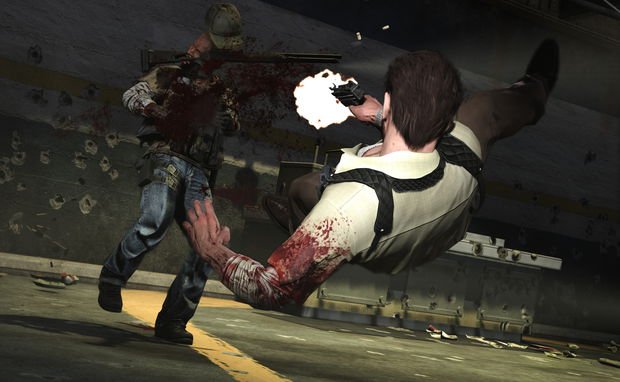 A little later on, I climbed up into a tower and initiated an action sequence where I had to snipe from above, protecting Passos from enemies flanking him on all sides. The sniping was spot-on as well, as I had to really lead my shots and account for the direction and movement of my enemies. Here too, bullet-time was necessary to get in good shots and do it in enough time to save my acquaintance.

The stadium level ended with Payne and Passos just missing Fabiana as she’s taken away, and at this point I handed the controller off to Tara Long to get a feel of the game. Tara soon demonstrated another really awesome aspect of Max Payne 3: the automatic melee combat system. Just about every time you get near an enemy, Max knocks them out, and you have a chance to execute them with a bullet to the head at point-blank range while engaged in bullet-time.

Tara proved to be pretty merciless, employing the tactic of running up to enemies and smacking them down before a shotgun blast in the face or the nuts. Though we both played in complete free-aim mode (and thus made it a bit more difficult for ourselves), you can always turn aim assist on if you’re having trouble. 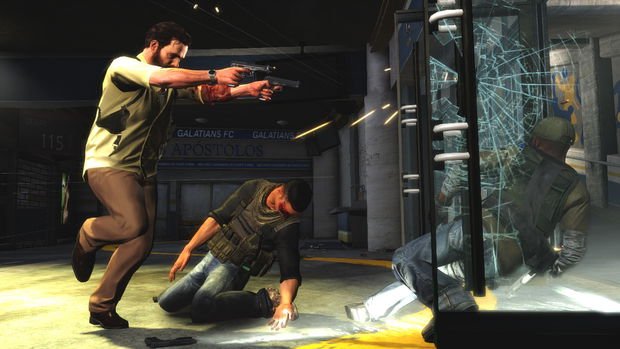 Another aspect of the combat that came into play in the second level was using the environment to one’s advantage. Max was running through the docks of the Tiete River on a rainy night, and throughout the level there are places where the environment can help turn the tide of combat to your advantage. One such point was a boat landing, where a truck sat just beyond the water’s edge. The player had the option to shoot the obstruction blocking the truck’s tire from rolling downhill, which sent it rolling into the river along with a few bad dudes. Also sprinkled around the level were the inevitable gas canisters, though using them was a strategic affair — they took a while to explode, so timing was important.

Both levels we played were great examples of how the series is retaining its noir feel through visual flourishes. The stadium level saw Max hallucinating a bit as he struggled to get through the area with his wounded arm (which, by the way, he quipped, is his “second favorite drinking arm”), and the gritty arena was rife with dark corners and minimal but effective lighting. The docks level included impressive rain and storm effects, as the wet asphalt glistened and lit up with every lightning flash.

After jumping back into the game to finish the docks segment, I came away from the whole experience incredibly pumped for what Max Payne 3 will have to offer. With a cohesive storyline that’s told in a similar but more evolved fashion and tight combat mechanics that make you feel like the bad-ass that Max Payne always has been, I sincerely cannot wait until this game comes out in May. 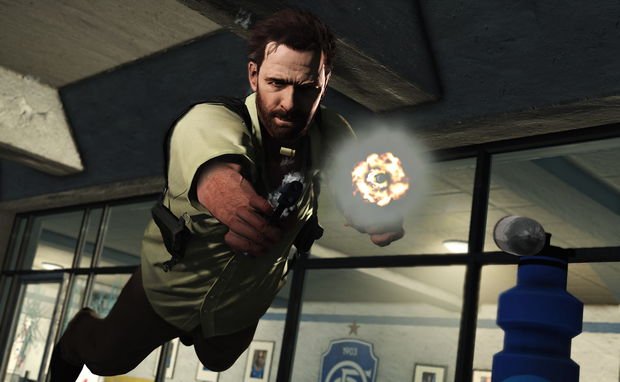 Though I didn’t get to see the multiplayer in action at all, I was told it will be a very engaging experience and will even include bullet-time for those in your line of sight. Also included will be an exciting Gang Wars mode, where the objective will constantly shift based entirely on how each match is progressing. Knowing Rockstar, the multiplayer will add a great deal of replay value to an already stellar single-player experience.

Any fears I had about where Rockstar was taking the series have been effectively put to rest, and I can’t wait to glue myself to the television set to see how Max’s story will progress.