Tower defense games infest the modern gaming markets like… well I’m sure you can think of a relative analogy to compare the two. It can be hard to find a good one when there is so much shovelware to sift through. Especially on the consoles, only a few tower defense titles such as Pixel Junk Monsters, Dungeon Defenders, and Defense Grid have managed to stand out in the crowd.

Anomaly Warzone Earth, with its simple yet addictive flipping of the genre’s tropes, was a breath of fresh air when it landed on computers and mobile devices last year. Instead of defending towers, you became the “monsters” and destroyed their enemy’s fortifications. The game was a critical success — our own Maurice gave it a highly respectable score — and now console gamer’s are finally getting a chance to see what all the hype is about. 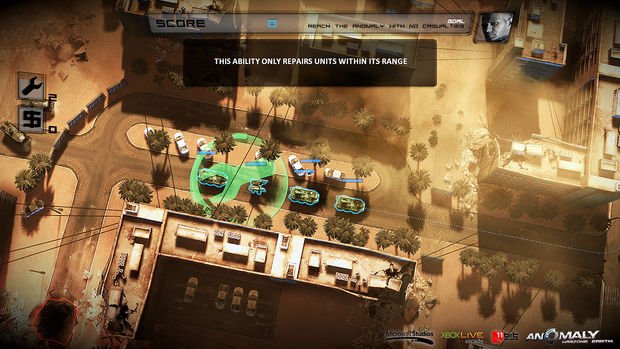 [Note: If you are a seasoned veteran of Anomaly, feel free to skip down to the “So what’s new” section to read about what’s new for the XBLA version.]

While Anomaly takes the tower defense genre and flips it upside down — making you the attacker — it also adds a level of real time decision making to the action, by putting the player on the battlefield as a live participant. Controlling the commander — the single foot soldier responsible for the survival and success of the entire convoy, and your avatar — players can move anywhere on a map at any given time to gather power ups that can help turn the tide of battle. While the freedom exists to explore any part of a map, it’s not a smart decision as the commander’s primary role is the management of his column of various units. The commander and your units work in tandem, and without each other’s support, neither will last long against alien turrets.

Using the tactical power ups you collect, the commander can lay down zones of repair, smokescreens for cover, decoys, and even offensive air strikes. The money you collect from resources on the map and from destroying enemies can be used to buy new units, or upgrade them. The combination of these tasks really ups the intensity thanks to Anomaly’s ability to thoroughly divide one’s attention, and is a welcome addition to a genre that is usually a sit back and watch affair. 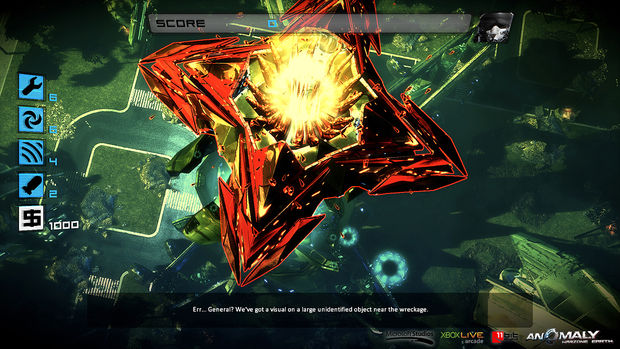 In a traditional tower defense game, success is determined by cutting down the various enemy paths with the strategic placement of deterrents and turrets. Anomaly Warzone Earth lets you destroy these turrets any way you like, using a special tactical view to plan the route your column of units will take at every turn on the map.

Whether it’s fighting through the sandy Baghdad roads or blasting alien attackers in the streets of Tokyo, the integration of the tactical view makes this a much more involved and balanced strategy game. Meanwhile, you use the default view to support your column with power ups as the commander, which adds to the intense direct action. Swapping back and forth between the two viewpoints lets you be both an armchair general, and a battlefield commander in the heat of battle. 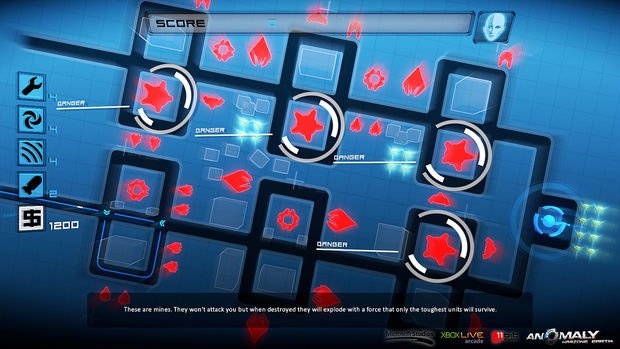 VR missions…Well sort of. To help freshen the Anomaly experience for fans who already played the game to death, 11 Bit Studios has added a new Tactical trials mode for XBLA that contains six new missions. The visuals should be instantly familiar to anyone who played Metal Gear Solid: VR Missions with its Tron-like aesthetics, but this mode is particularly interesting because of the way it presents tactical riddles for players to solve in order to defeat each trial.

What makes each mission a riddle though is in the the way they have to be solved. For instance, in one of these missions instant failure occurs if certain mines are detonated. Figuring out the best route, squad placement, and overall strategy becomes even more important than in the campaign mode where a little brute strength can get you through the tougher battles. I was hands-off in this part of my preview, but from what I saw, players will find plenty of challenge trying to take on these difficult missions, as my demonstrator from 11 Bit Studios failed a couple time before moving on. 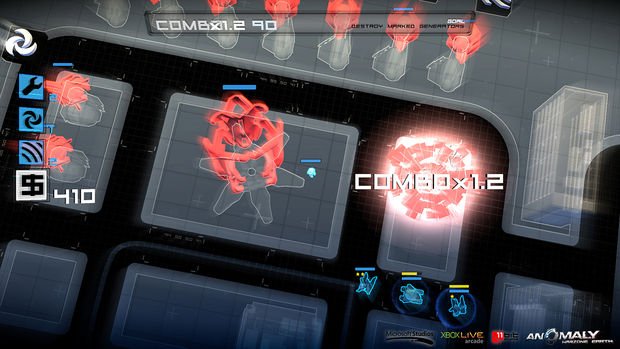 Home is where the heart or controller is.

Generally when a game makes the move from computer to console, there tend to be issues when it comes to reconfiguring the control scheme. It makes sense; computer games are generally designed around an interface that offers way more flexibility in customization.

Anomaly Warzone Earth is a rare beast, though. The game actually started off as a console title and only shifted to computer and mobile platforms later in its development. What this means is the game has always been first and foremost designed to be played with a controller in hand. 11 Bit Studios made sacrifices in its control scheme to get the game to work on other platforms, and now they are finally releasing the game the way it was meant to be played.

Anomaly Warzone Earth has already won numerous awards for its addictive convention-twisting concepts, but soon console gamers are going to get to see what this little gem is all about when it lands later this year on Xbox LIVE Arcade.