Just when you thought they were out of good licenses to adapt for LEGO videogames, they pull one back in. Among others, we’ve explored the adventures of Indiana Jones, the far away galaxy of Star Wars, and the hallowed halls of DC.

Now, TT Games jumps ship to the realm of the god of thunder, the merc with the mouth, and your friendly neighborhood Spider-Man. Just recently we got to see an early look at the game, and it’s none too shabby. 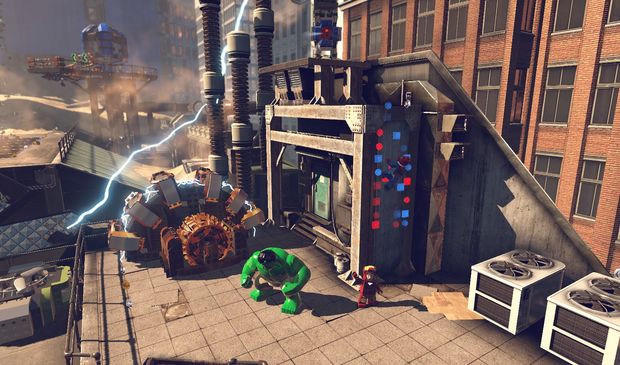 The story of LEGO Marvel straddles a similar line to LEGO Batman 2; a comic book-style story with a liberal helping LEGO silliness. Like the recent LEGO City: Undercover, the story here is fully voiced. Speaking with TT Games producer Phil Ring, he said the team “wanted everything to feel alive, and more than what we had in LEGO Batman 2 where characters only spoke in cutscenes. We wanted bosses shouting at you and characters talking with each other, so we’re recording a lot more audio for this game.”

Having a fully-voiced story also affords more opportunities for humor, outside of the physical comedy gags that are common to the series. It works to good effect, too — the banter between the less than sharp Hulk and the always-on sarcasm of Iron Man played like a Saturday morning cartoon.

Less-referenced Marvel entities will be making appearances as well. At the end of the demo, when Iron Man and Hulk help Nick Fury (modeled after the recent Ultimate/Sam Jackson version) take Sandman into custody, you could spot three day workers with Damage Control marked across their uniforms.

Ring continued: “If you’re a Marvel fan, there’s plenty of small references like this you’ll get, and if not, then what the hell, it’s just three clean up guys in uniform.” The script itself will see stewardship by Marvel writer Matt Hoffmeier, so there should be no shortage of Marvel cameos, references, and the like. 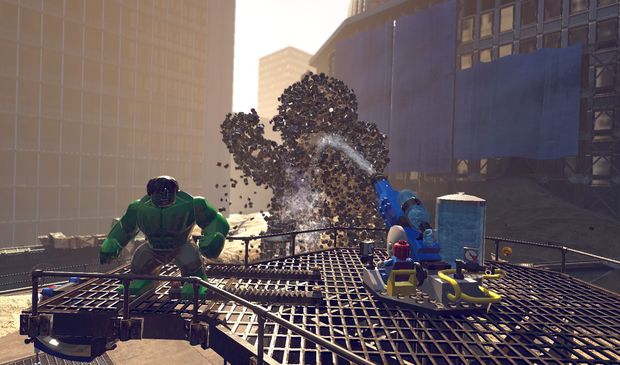 The moment-to-moment gameplay of LEGO Marvel looks very much like a traditional game from TT. You’ll run around the environment, smashing pieces and reconstructing them into new objects to move forward. That said, you do get a host of heroes and abilities to play around with. Full disclosure, our presentation was hands off, so I can’t say how well the powers feel, but the combat didn’t look particularly amazing.

Really, it’s those classic problem-solving moments that make better use of the hero license. Going up against Sandman, Iron Man and Hulk need to come up with a way to get past his giant sand wall. Hulk’s brute strength won’t work and neither will blasters. With a little searching, we get Iron Man to blast a nearby fire hydrant and generator, then have Hulk revert to Bruce Banner to reconstruct the pieces into a giant water cannon to solidify the sand so Hulk can break through it.

It’s the way each of the characters, and their abilities, play off each other in these puzzle-esque scenarios that gave the LEGO games their charm, and that much looks well intact here. Though TT is staying hush hush on some details, there will be side activities to partake in outside of missions, such as explorable miniature hub area of New York. “There is a hub world…you can go into new areas and explore including some places significant to the Marvel Universe and other like the Statue of Liberty, but it’s all miniaturized of course…it’s very much a LEGO world,” said Ring.

Basically, if you’ve enjoyed LEGO titles in the past, you should be right at home here. There doesn’t look to be crazy breaks in series tradition — just refinements and augments. And if you’re a Marvel fan, then I suppose that only sweetens the package.