Sony has lined up more than a few heavy hitters for the launch of its new handheld, the PlayStation Vita, next February — major franchises such as Uncharted, Resistance, and Katamari Damacy. But I’ve been more impressed by the smaller titles I’ve seen. First, it was Queasy Games’ Sound Shapes, a platformer with music as its heartbeat. At last week’s PlayStation Holiday Showcase, I checked out a game called Escape Plan, and it ended up as one of the highlights of the event.

Escape Plan marks the debut of Fun Bits Interactive, a new studio made up of industry veterans who have worked on games such as Fat Princess. CEO Chris Millar, who gave me my demo, was the team lead on that PSN title, and he told me that his studio is interested in creating quick, easily digestible experiences. Escape Plan is a gorgeous grayscale puzzle game that will ship with about 85 levels, most of which can be completed in a few minutes. It’s perhaps the best showcase of the Vita’s unique capabilities that I’ve seen. 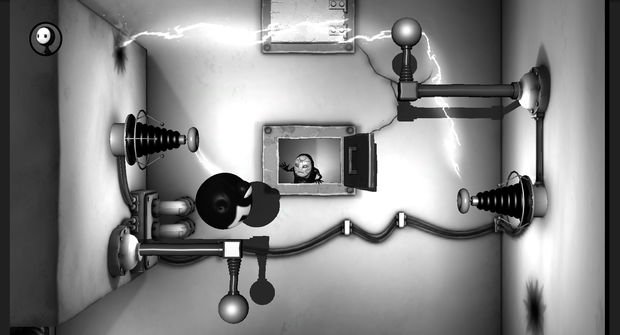 Lil and Laarg (pronounced large) are the last living prisoners in a factory where Bakuki, the head of the plant, is planning to recycle them into his minions. It’s your job to help them escape, but that won’t be easy, since the two of them are rather helpless little creatures. They need your continual attention, lest they meet some terrible (or even pedestrian) end.

Fun Bits has dubbed Escape Plan a “touching experience,” and indeed, you control almost everything in the game with the Vita’s front touchscreen or rear touchpad (the right stick is used for camera movement). Lil and Laarg are charmingly aloof little things who move somewhat like lemmings: once they start walking, they will continue to do so until either you tell them to stop, or they encounter an obstacle. The fundamental challenge in each room is to clear a safe path for them to proceed. 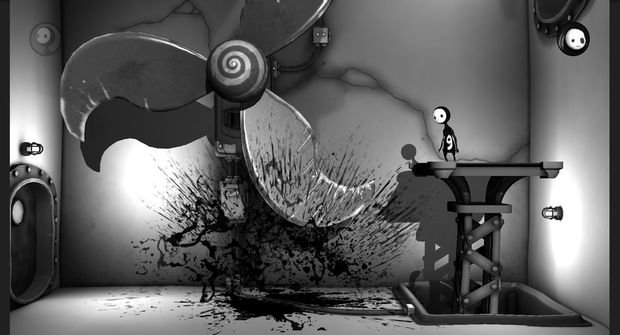 What I haven’t touched on is just how amusing Escape Plan is. Even failure is funny; death in this game evokes Limbo in its sudden, gruesome-yet-somehow-also-whimsical nature. “We wanted death to be entertaining, because in so many games when you die, it’s a tragic thing and [a setback],” said Millar. Lil and Laarg are fragile, squishy beings, and Escape Plan makes this clear early on. One of the first rooms is basically empty, except for a single brick lying on the floor — not much of an obstacle, right? But if you neglect to clear it out of the way, the oblivious Lil will trip over it and die from falling on his face. (Both Lil and Laarg have their own death counters plastered on their bellies, so you’ll know exactly how many times you’ve led each of them to their doom.)

It’s that kind of smart teaching moment that marks an exceptional puzzle game. The best ones bake their tutorials into the game, as opposed to text pop-ups, and Escape Plan’s stages do a great job of explaining the gameplay. Fun Bits also recognizes that as a launch Vita title, Escape Plan has the added duty of helping to familiarize users with the hardware, so the game’s stages force players to explore the system’s functionality. An early level starts Lil out on a platform with a precipitous drop at the end. On the wall are three panels that you have to pop out into the foreground by tapping on the Vita’s rear touchpad, in order to form a walkway for Lil. He also has the ability to drink coffee and, with a pinch (touching the screen and the pad simultaneously), scoot forward in a caffeine-powered dash. 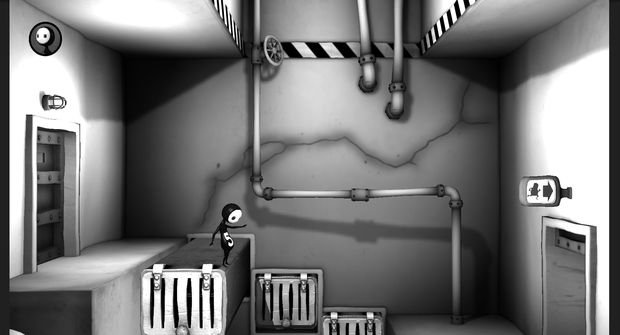 At some point, Lil comes across a fellow prisoner, a rotund creature locked in a cage. Once he frees Laarg, the two of them team up to help each other get out of the factory alive. Many rooms will require you to switch between Lil and Laarg. Both have unique talents. Along with Lil’s dash, he can inhale air from gas tanks and inflate himself, which allows him to float to otherwise unreachable areas. Laarg’s size means he’s slow and top-heavy — if you swipe repeatedly to try and get him to move faster, you’ll just knock the poor fella over — but his bulk comes in handy thanks to a butt-smash that can go through floors. (Trying this without a mattress beneath him, however, results in a grisly splat of a death.)

Even in my short demo, which lasted only 20 minutes, I saw a wide variety of hazardous puzzles. In one, poisonous gas spews from two holes in a pipe; holding a finger on the screen over a hole blocks the fumes there, but causes a more rapid flow out of the other opening. Another features sheep-like creatures that can be used as guinea pigs to test the dangers in the room. Bakuki’s minions, whom Millar characterized as “caffeinated, evil little Oompa-Loompas that will kill you on sight,” also come into play; they fire lethal blowgun darts, so you have to avoid or kill them. The game has some fiendish timing puzzles, too: Millar, who had been leaning over so I could get a better view of the screen, explained after dying a few times in one stage that he needed to take back full control of the system in order to complete the level. 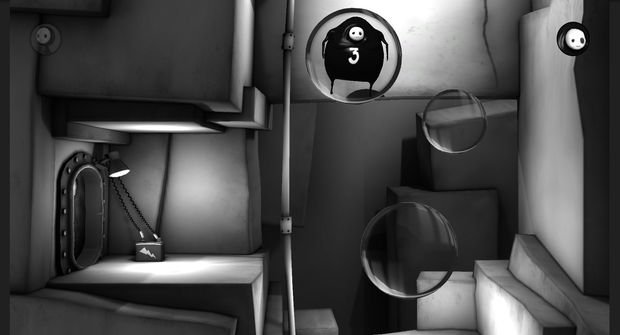 As of now, Fun Bits is in cleanup mode, furiously squashing bugs as they come up. I saw some minor issues with text being garbled or in another language, but had no issues with vital concerns like the responsiveness of the touchscreen and touchpad. Sony would do well to promote Escape Plan alongside its major tent-pole franchises at launch: it offers a pick-up-and-play experience that looks great and showcases the many facets of the Vita hardware. I’m excited to try the full game in February.