Despite having played most of the installments in the Halo franchise (exceptions include Halo Wars and Halo 3: ODST), I’m what you would call, at best, a casual fan. I’m not particularly invested in the fiction, and even though I got rather into LAN parties for the earlier titles, the series’ multiplayer has never been able to keep my attention in the long term, fun as it can be.

Some people weren’t exactly thrilled to hear that Halo 4 would be the beginning of a new trilogy. Not to put words in their mouth, but the way I see it, the numbered games have largely played it safe, and it was only a matter of time before interest waned. We were simply overdue for a break.

Before driving up to Kirkland, Washington for a day trip to 343 Industries, I questioned whether I was mentally prepared to get (even potentially) invested in three more main-series Halo games. As it turns out, there’s nothing to worry about; Halo 4 is in very capable hands. We’re in for a treat. 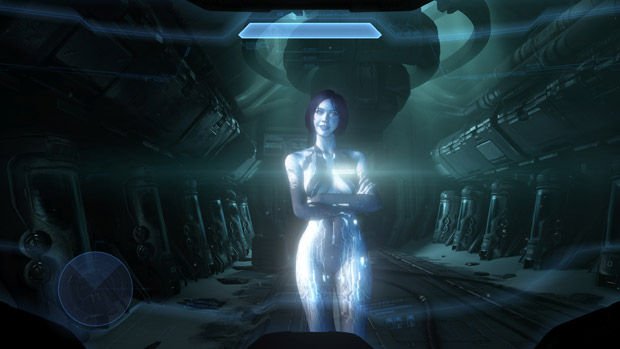 While the day’s events included hands-on demonstrations of two Spartan Ops missions and plenty of War Games (multiplayer), we have covered both of these components already, so I’ll primarily focus on the campaign for the purposes of this preview.

Prior to starting up the first campaign mission of Halo 4, “Dawn,” we were reminded how Bungie concluded Halo 3 with a brief clip from that game’s ending. “Wake me — when you need me,” Master Chief calmly states to Cortana, as the ship they’re stranded on floats toward a mysterious planet. It’s nearly five years later, and the familiar blue AI needs to wake the Chief up from cryosleep.

This mission, a prelude, is shorter and more linear than most others will be, according to 343 Industries. It’s intended to be a reunion, introducing new players to what a Halo game feels like as well as refamiliarizing returning players with the Covenant. While these enemies might still behave in combat as they have previously, up close, their character models are noticeably more packed with detail, and their individual designs have undergone a bit of a makeover. 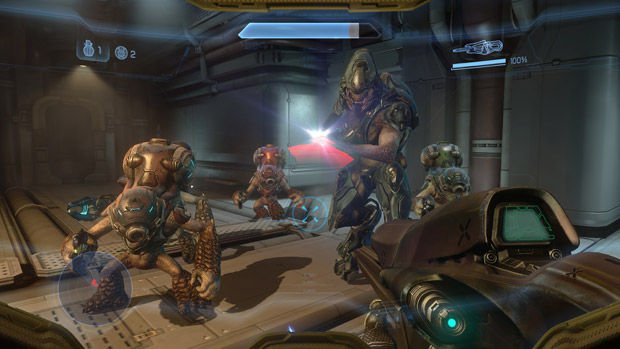 After waking up and taking out the occasional group of Covenant forces aboard what’s left of the UNSC Forward Unto Dawn, a more concentrated assault occurs as troops actively break into the ship. While it had been a while since I’d last touched a Halo title, I noticed two things immediately: the guns seemed to pack a much more substantial wallop — as if you could truly hear their weight — and movement was much faster by default. I ended up turning the sensitivity down to three or so, and that felt wonderful.

The standard gunplay continues and is then followed by a still-in-first-person climbing sequence in which you must dodge falling debris. While this sort of scene has been done before elsewhere, it fit well in “Dawn” as a break between the typical action one would expect from an opening Halo mission.

Eventually, the fight moves out onto the surface of the Forward Unto Dawn, where the immediate goal is to blast away the incoming Covenant fleet with a missile. Shooting Grunts is fun, but it’s even more fun when their corpses float away once the job is finished; the muted sound of gunfire adds to the disorientation and sense of urgency in this sequence.

When a vast, metallic-looking object becomes fully noticeable in the background, the objective at hand is derailed, if only for a moment, until you recall the more pressing threat to your life. Upon dealing with those pesky Covenant ships, the race is on to find a functional escape pod before the UNSC frigate gets pulled into the looming Forerunner planet by gravitational forces. 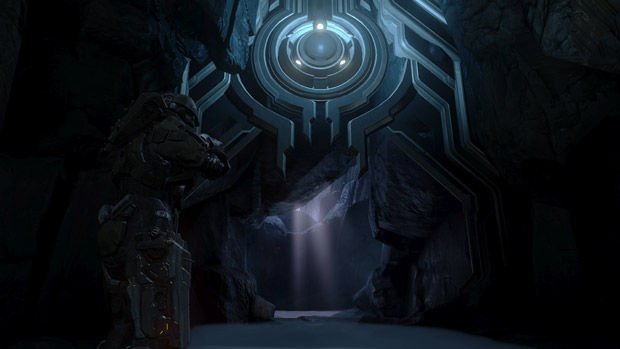 “Dawn” was perfectly fine as an opening level, but it was “Forerunner,” the third mission of Halo 4‘s campaign, that got me truly excited. Whereas the former felt very safe and familiar, the latter gives me hope that 343 can make the full story compelling and ultimately worth playing all the way through.

Frankly, this level reminded me of Metroid Prime.

That comparison can be drawn in a few different ways, and considering Metroid Prime is one my all-time favorite videogames, I mean it as a huge compliment; it’s as unexpected to see as it is cool. From the foreign look of the new Promethean enemies themselves, to the planet’s jagged landscape and the towering structures that protrude from it, you start to get that “exploring an alien world” vibe.

Every so often as I pushed forward, I would hear this unusual, very distinct sound effect. I still can’t quite place the noise. It seemed like a choir of people humming very deeply — like a hmmmmm — but I’m not entirely sure. Whatever it was, the audio gave an organic feeling to the planet reminiscent of Metroid‘s Tallon IV and really meshed well with the planet’s art style. It didn’t feel like I was moving through another linear first-person shooter level; it felt like I was in the midst of a dangerous new adventure. 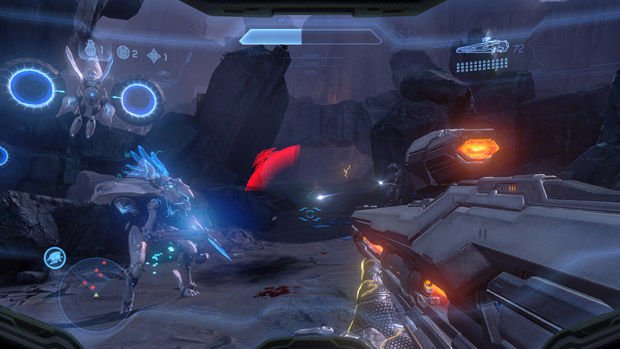 It can’t be stated enough how welcome an addition the Prometheans are. The stoic Knights are intimidating, and satisfying to fight. Between them, the dog-like Crawlers, and the hovering little Watchers, which can toss back grenades and regenerate fallen Knights, it can be easy to get overwhelmed if you aren’t being smart about your position on the battlefield.

Throughout this mission, the Covenant and the Prometheans fought one another, providing the opportunity to temporarily take sides before finishing them all off. This really exemplified how big an impact new enemies — and their different behavior patterns — can have on making shootouts enjoyable again.

As much as I love the fluttering carapaces and skull faces of Knights, I dig their weapons even more. Not only do they look neat — upon first picking each weapon type up, it will form to your hand — but they are a ton of fun to use. Fans of shotguns will be particularly happy, as will snipers. I also have to give a special mention to one of their pistol-esque weapons, which, when fully charged, automatically fires off a powerful energy blast. That one is going to lead to some great moments in multiplayer.

As for the mission objective itself, Master Chief and Cortana must find a way to send a warning message to the nearby UNSC Infinity. We aren’t allowed to talk about some of the (admittedly major) plot points that transpired in “Forerunner” — 343 wants them to be a surprise for players — so I’m not going to give a full moment-by-moment rundown up to that point. Just know that I’m personally interested in seeing where the story of Halo 4 goes and am feeling pretty good about 343’s ability to deliver a solid narrative. The Prometheans are incredibly promising and I’m looking forward to seeing them get fleshed out. 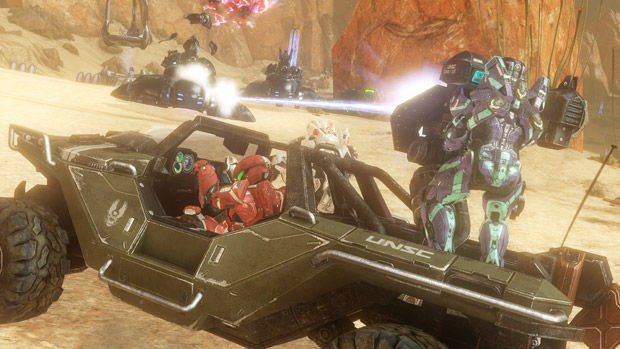 As for the other modes, we got to play the first two missions of Spartan Ops. Five of these will be rolled out on a weekly basis at no additional cost. While this is a neat way to get players invested in Halo 4, you’ll need to keep in mind that there are 50 missions in total.

As such, don’t go in expecting something amazing. From what we saw — and this could change in further-down episodes — these are essentially short, sandbox-like levels where you have a basic objective and you can go around fighting enemies however you see fit, similar to traditional combat scenarios in Halo games. With a few co-op partners, this was decent fun, but we’ll need to keep our expectations in check. If 343 can deliver on promises of a providing an interesting overlying narrative through Spartan Ops, I’ll be pleasantly surprised.

War Games, Halo 4‘s multiplayer component, was simply awesome in the ways you’d expect. We got to play Regicide, which Allistair has previously covered. He didn’t particularly care for this deathmatch variant, and while I wasn’t feeling it as much as the other modes, I think some of you are going to fall in love. Basically, the current top-scoring player has a bounty placed on their head that offers additional points for whoever ultimately takes them down. The longer you have the bounty, the more perks you receive (like overcharged shields). Points for bounty kills are scaled such that the match will constantly feel close — everyone has the chance to make a huge comeback.

Capture the Flag, rather amazingly, was super fun. I say that as someone who loathes the standard CTF mode in just about every videogame. Here, both teams have capturable flags out on the field simultaneously and you can run while holding the flag. Additionally, you get to wield a magnum when you’re carrying the flag, so you aren’t totally defenseless at longer ranges. Somehow, these elements all came together to form a CTF experience that I found to be fast, fun, and intense. 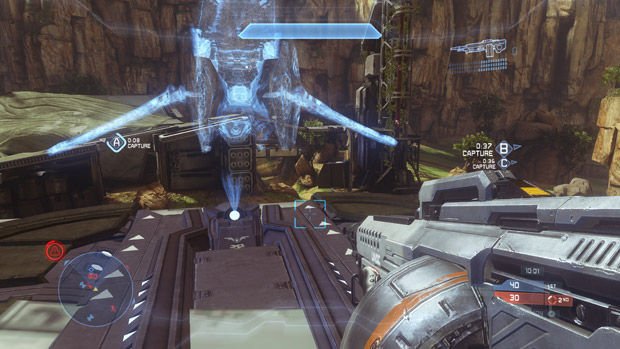 Best of all, though, was the Dominion game type. Teams compete over three bases, which serve as control points that can be captured by activating terminals and then allowing the initiation process to complete. Once you have a base in your team’s possession, keeping it defended for long enough will cause additional capture meters to fill up as the site is resupplied and then eventually fortified with auto-turrets. While not overpowered, they will make it difficult to enter otherwise-unguarded areas. Structures will also allow team-specific vehicles to be generated, which was a nice touch.

The end result is equal parts tactical and hectic, as you move in to capture a position just as the enemy troops are leaving to go after one of yours. Victory can be achieved by accruing enough points from held bases, or by taking all three of the map’s control points, which then gives the competing team one final chance to take a base without getting any further respawns. Kill them all off, and you take the win.

As other members of the press left the event, and 343 Industries employees started taking their empty spots, they thankfully didn’t completely kick our asses. It was a great way to cap off the day, which turned my total apathy toward Halo 4 into genuine anticipation of its full release in November.

War Games and all of its ensuing customization options shouldn’t come as much of a surprise to fans. Tweaks have been made that will change up how some of you play the game, but it’s still largely the same well-received competitive multiplayer to my untrained eyes. Alternatively, Halo 4‘s campaign isn’t simply the next logical step for the franchise — it’s an exciting new direction. And it’s far better off for it.