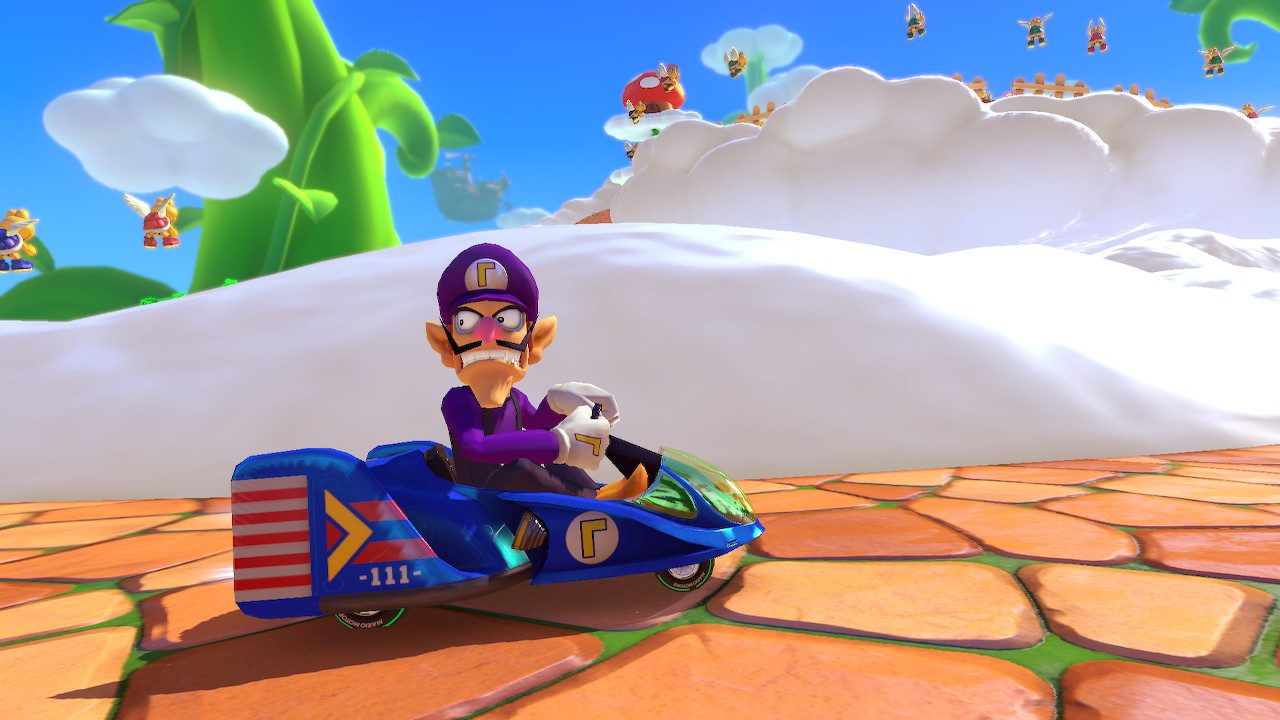 After years of rumors that Nintendo was ready to drop a proper sequel to Mario Kart 8 Deluxe on Switch owners, we found out in February that wouldn’t be the case. While I have no doubt the next proper entry in the Mario Kart franchise is already in the works, we’re all going to have to make do with the next best thing: DLC. Rather than potentially splitting up its player base, Nintendo is keeping its best-selling racer relevant, adding 48 remastered tracks throughout 2022 and 2023 as part of the “Booster Course Pass.” 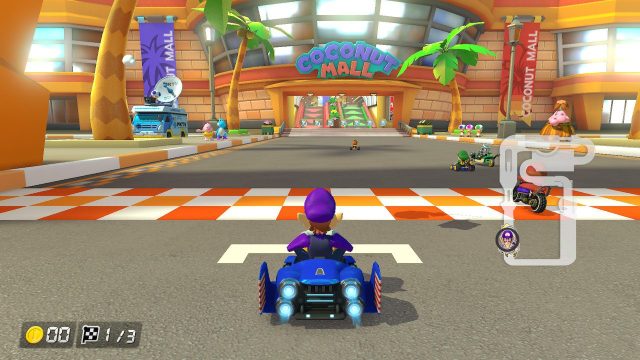 The first batch of tracks released as part of Booster Course Pass Wave 1 gives us a good look at what should and shouldn’t be expected from these remastered legacy courses. The eight tracks that are part of the Golden Dash Cup and Lucky Cat Cup have certainly received a glow-up from their series debuts.

They’re clean, bright, and charming. They’re also pretty simple, and as has been pointed out repeatedly across social media, these tracks do not feature the outstanding art direction found in the rest of Mario Kart 8. That textured style that has made MK8 the best looking kart racer since 2014 is absent as these DLC tracks appear to be modeled after their look in Mario Kart Tour.

That’s obviously going to be a big point of contention, but if you’re looking for somebody to drop the hammer on “Nintendo’s lazy ways,” I am not the guy to do it. I don’t really mind the look of these tracks. In fact, I think one or two of them are actually quite beautiful.

A far larger concern for me is none of these tracks implement Mario Kart 8’s signature anti-gravity mechanic. There is no wall-riding here, even though some courses could benefit from it in a few sections. And the reason for that, if I were to guess, is that Mario Kart Tour doesn’t have anti-gravity sections, and it really seems as though these tracks are meant to be shared between the two games. All but two tracks in Booster Course Pass Wave 1 have already appeared in Tour, and any significant track changes that were made for the mobile title are present here as well.

There is always the possibility that could change as we get more waves of DLC. For now, we just have Wave 1, which not only brings back one of my most-played tracks from Mario Karts past but also makes a great case for introducing those Tour-exclusive courses to Nintendo’s flagship racer. Of course, some of the included tracks are better than others, which is why I’ve gone ahead and ranked each of them below. 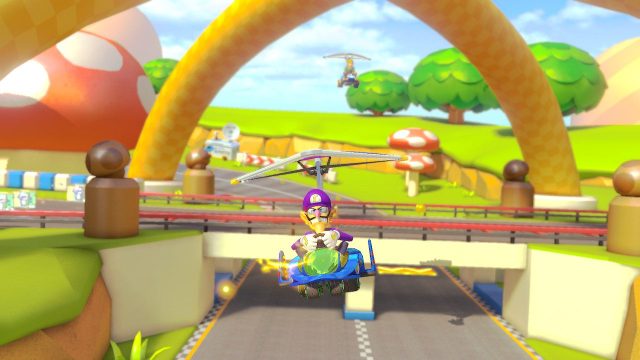 It’s hard to get too excited about what is essentially the tutorial track from every Mario Kart game. The first course of every game’s Mushroom Cup is there not really to challenge or trick players with its design but rather to introduce them to the different mechanics of the game. For Mario Kart 7, for example, it had to introduce players to the new glider mechanic in the safest way possible. Enter Toad Circuit, an extremely simple track with a few turns players can use to get familiarized with the drifting mechanic and a long straightaway that gains glider ramps on the second lap.

This course wasn’t all that exciting back on the 3DS and it sure as hell hasn’t gotten better with age. In all honesty, it’s kind of a waste of space. 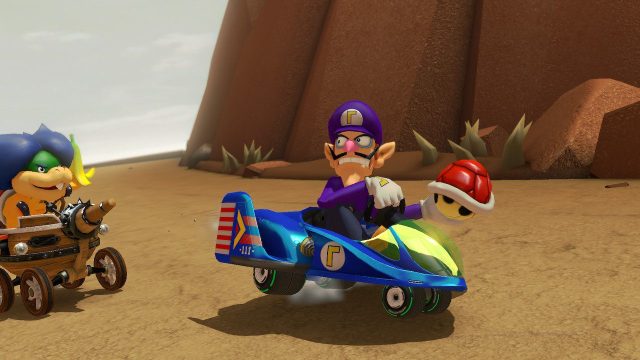 I’m sure some people will consider it sacrilegious for me to list a classic from Mario Kart 64 so low on the list, but what might have been hectic and nail-biting back on the Nintendo 64 is pretty rote on Switch. Choco Mountain carries over some of the track changes that were made in Tour, including the addition of an unnecessary glider section, but it doesn’t find a way to amp up the suspense of driving along a dangerous mountain path with falling boulders. Even on 200cc. This might be the only track in Wave 1 I actually prefer in its original game. 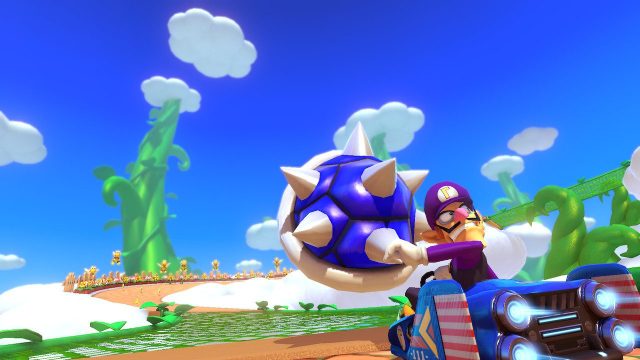 Sky Garden is an interesting case. The track just recently debuted in Mario Kart Tour and, unlike the Super Mario Kart tracks that have been brought over to the gacha racer, it received a significant visual upgrade. It’s not the same flat track in the clouds it once was. The course has some elevation to it, with a few little shortcuts that can give you the advantage if you play your cards right. It may not be as dynamic of a remake as we saw with Mario Kart 8’s Ribbon Road and Cheese Land, but it’s certainly more interesting and thoughtful than what Tour did with Super Circuit’s Bowser’s Castle tracks. 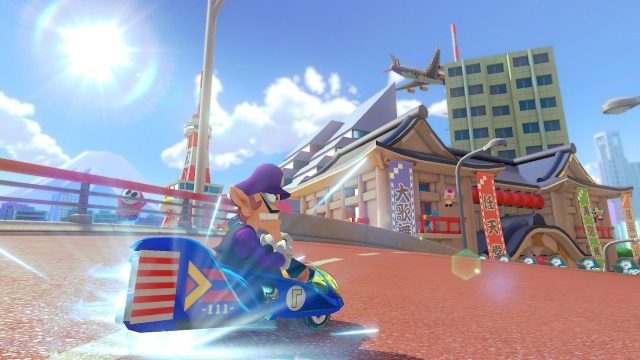 A few years ago, I lamented the fact that all of the great little original creations found in Animal Crossing: Pocket Camp seemed destined to die with the mobile game as Nintendo wasn’t interested in transporting them to its console brethren. The same fate could have befallen Mario Kart Tour’s exclusive tracks as well, but thankfully, that’s not the case. Wave 1 of the Booster Course Pass includes three Tour originals, which not only give console players a chance to see what they’ve been missing but also give Tour fans a chance to experience these tracks with proper controls. Tokyo Blur, which condenses Godzilla’s favorite stomping grounds into a bright and beautiful bite-sized course, actually combines three different versions of the Tour track into one race.

As with many of the Tour originals, Tokyo Blur’s design allows for multiple routes depending on which version of the race you’re participating in. In the Booster Course Pass, Tokyo Blur, Tokyo Blur 2, and Tokyo Blur 3 routes each make an appearance as individual laps of the race. So you’re never taking the same route twice. It’s a neat gimmick that shows you everything the developers managed to create for this track, but boy is it a short race. 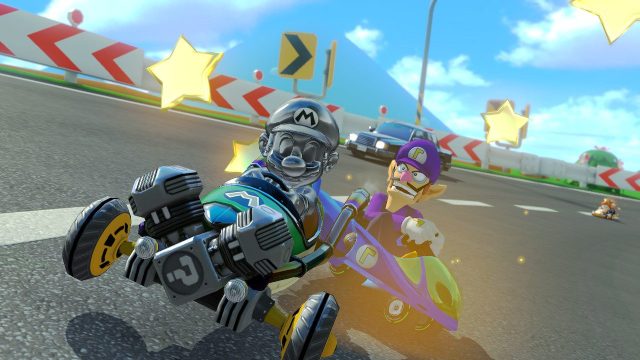 You know, I am a sucker for a good traffic track. Whether it’s Toad’s Turnpike, Mushroom City, or Moonview Highway, I love the chaos that comes with dodging cars while dodging green shells and banana peels. Shroom Ridge isn’t exactly the best example of a traffic track, but when you’re playing it on 200cc, it can be pure pandemonium. And when there is absolute chaos on the track, that’s when Mario Kart is at its best. 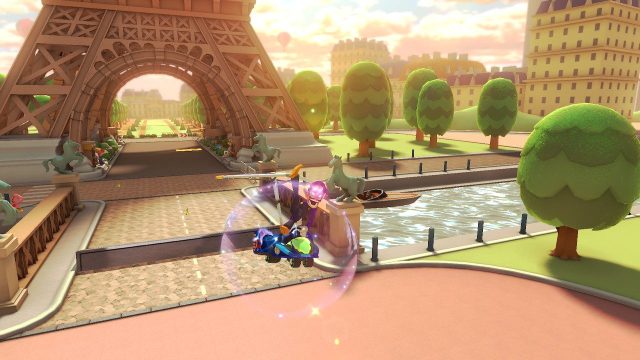 Like with Tokyo Blur, Paris Promenade combines multiple versions of the track from Mario Kart Tour into a single race. Unlike with Tokyo Blur, there is really only one route here. The first two laps follow the course design of Paris Promenade and Paris Promenade 3 which takes you around the Arc de Triomphe, over the Jardins du Trocadéro, under the Eiffel Tower, and by the Luxor Obelisk. For the final lap, you do it all in reverse. Carefully placed barriers guide you back down the track, potentially running into any slowpokes struggling at the rear.

That’s one of the things I love about Nintendo’s design philosophy with Mario Kart Tour and it’s something I hope it carries into the inevitable ninth entry in the series. Plus, this is easily the most beautiful track of Wave 1. 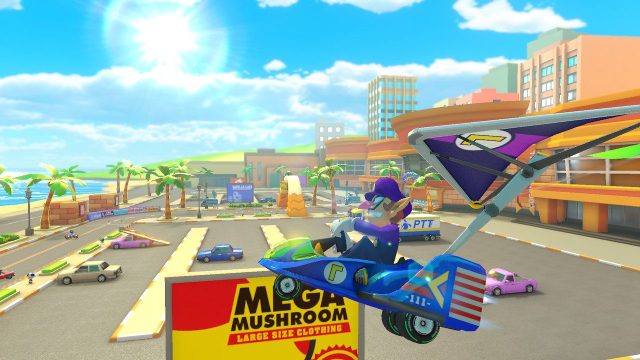 When it was released, I think Mario Kart Wii took a lot of flack for its course design and just how wide it made everything to accommodate motion controls. A lot of that flack was well earned, but I do think several of the courses found within the game are all-time greats. Grumble Volcano already received an HD makeover in Mario Kart 8, so it’s only fair that MK Wii’s best track, Coconut Mall, gets one as well. The course now sports a positively radiant American Southwest color palette, which certainly beats the original’s faded pastel look. Some parts of the track have been tweaked from the original version, but overall, it’s still the same, amazing course that I played ad nauseam back on the Wii. And how about that music?! Ninja Hideaway is a track that has me asking, “How the hell does this work on mobile?” An absolute masterclass in stacked track design, the Wario-themed course features multiple levels for drivers to choose from as they work their way through a ninja Shy Guy-infested dojo. You can stay on the bottom floor or work your way up to the rafters above looking for the best route that’ll give you the edge over your competitors. It wasn’t until my seventh race around the track that I found a brilliantly placed shortcut, and I know it’s going to take me another several dozen playthroughs until I find the ideal route. Ninja Hideaway is easily the best track included in Booster Course Pass Wave 1, and arguably one of the better tracks available in Mario Kart 8 Deluxe.

Overall, I think these eight tracks are really effective in preparing players for what to expect with the Booster Course Pass. Some are old favorites, others are finally getting a chance to be played the proper way. They may not feature the same radiant art style as Mario Kart 8 Deluxe’s core tracklist, but they look good. And some, dare I say, even look great.

If none of these tracks really tickle your fancy, you’re probably better off just waiting for the next proper entry in the Mario Kart series. For me, I’m cautious but optimistic the rest of the Booster Course Pass will be worth the $25 entry fee once all is said and done. Obviously, there are some great tracks included already with Wave 1, but if Toad Circuit’s inclusion is any indication, I shouldn’t completely dismiss the possibility of some stinkers getting through too.