The rumors were true, and now that I’ve played it, I’m glad. Sony has been working on a mashup fighting game that pits many of their first-party characters against each other in a Smash Bros. style four-player match. This brawler was shown off for the first time earlier this week at a PlayStation press event, where I got to mash buttons playing as Kratos, Parappa the Rapper, Sly Cooper and others. They call it PlayStation All-Stars Battle Royale, and it’s going to be a pretty big deal.

While All-Stars pulls from two decades of Sony game history, we were only shown six characters and four stages at this event. This means that you should probably get ready for the inevitable slow character rollout, with what’s sure to be more reveals at E3 later this year. Still, this early look was enough to get a solid picture of what to expect in the final version, and from what I’ve seen they have a pretty good thing going on here. 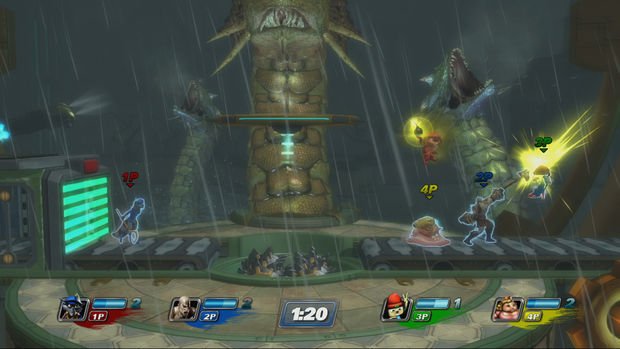 PlayStation All-Stars Battle Royale is being developed by SuperBot, a company purpose built within Sony Santa Monica for the job. The team consists of members with extensive backgrounds in fighting and combat titles, and they come with an understanding of how their title will have to appeal to a wide audience, satisfying both casual gamers and hardcore fighting game fans. We’ve only seen a small taste, but it’s clear that these guys know their shit.

Through their work, the game’s control is really easy to learn, and not unlike other four-player brawlers out there. Either the left analog stick or the d-pad controls movement of your character. I found that I like the d-pad a bit more as button commands can be combined with directional presses to access additional moves, with the d-pad giving me better control of those. The right stick will let you perform throws, with different ones assigned to each direction. The X button jumps, and the other three face buttons are assigned to different attacks. L1 blocks and R1 picks up items.

The last control, assigned to R2, executes a super move. While fighting, you’ll build up a meter that lets you perform a super move that knocks out characters. Also, some attacks knock AP (action points) out of opponents, letting others pick them up to fill up these meters. There are three levels of supers, each one stronger than the last, and each requiring another filling of this meter. If you can manage to land hits and survive long enough, a level three super can knock out all other players, earning you points. 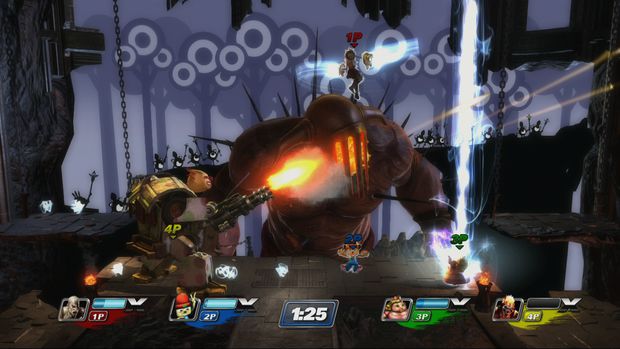 This brings us to All-Stars‘ battle system and scoring. Victory goes to the player with the highest number of KOs; knocking out a character adds to your score while being knocked out subtracts from it. So, there’s nothing in the way of health bars here, as health doesn’t really matter in the long run. This makes for a game that’s really easy to get into, as there’s no technical scoring to learn.

I played with each of the reveal characters a few times to check out their move sets and supers. Each of the six are quite different from one another, with varied play styles that Smash Bros fans will probably feel right at home with. That said, Smash players should not expect an All-Stars character parallel. While this game looks similar, it feels much different.

Here’s a quick rundown of the six debut characters:

Parappa the Rapper: Parappa is small and fast; a short-range melee character. His moves come right out of Chop Chop Master Onion’s kung-fu dojo, though you’ll have to be right up on your opponents to connect with most of them. One of his most useful moves is also pretty funny: he brings out his Boxy Boy boom box (it arrives with the classic “Aw yeah!” hip-hop sample) to the play field, where it spews AP bubbles that can be picked up to charge super meters. Smart players were using the boom box to level up and use Parappa’s skateboard super, which dashes through and knocks out anyone in sight. It’s a total dick move, but it works, and wins matches.

Radec: Killzone character Radec isn’t as cute as our favorite dog rapper, but he makes up for it with badassness. He’s quite the opposite of Parappa, working best as a long-distance attacker, with projectiles and lasers that easily land hits on the opposite side of the play field. His level one super gives the player a reticule that can be placed over any character to direct a large-scale fire attack.

Sweet Tooth: Those wanting to play as a strong bully will want to choose Twisted Metal‘s scary clown hero. He’s huge and all about space control, with attacks that can send you flying. Up close he hits really hard, so stay away if you can. I loved using him to shoulder check enemies to send flying across the screen. His level three special is flashy, bringing fire and parts flying out of the sky to his body to turn him into Mechatooth, armed with a machine gun that will easily mow all opponents down.

Fat Princess: No one picked the big girl in the first rounds, but I found that she was one of my favorites after trying her out. I fell in love after seeing her match opening animation, which has her instantly plumping up after downing a piece of cake. Princess has swinging mid-range attacks that are fast and reliable, and they provide good defense, as a lot of jumping and blind swinging can take place. She’s surprisingly agile and has lots of power.

Sly Cooper: Sly is unique in that he has no defense at all. Instead, and true to his character, he can turn invisible by hitting the block button. This makes him quite a bit more sneaky, as he can get behind opponents to use his special moves in close range. His normal attacks glide him from platform to platform, and he can fly/attack diagonally, making him great at recovery.

Kratos: Anyone that has enjoyed any of the God of War games will feel right at home with Kratos, as he plays exactly the same in All-Stars. He’s the best all-arounder of the initial line-up, with a mix of both ranged and close quarters moves. His spin attacks take up huge space, and his spear-based pokes will push you back. He’s a beast. 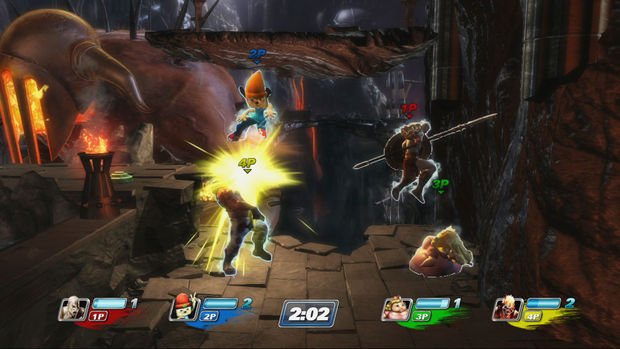 Developer SuperBot has done some fantastic work with the stages shown so far. Rather than simply re-creating part of a game’s universe as a backdrop, they’ve taken elements from many Sony IPs and have mashed them together to make for some really crazy interactive settings. One stage, Dreamscape, looks like it came straight out of LittleBigPlanet, complete with stage creation pop-up menus in the background, randomly selecting platform pieces for you and your opponents to overcome. Suddenly, out of nowhere, the screens in the back of the stage become a backdrop for a Buzz! quiz show, with Buzz coming out to ask random trivia questions. In one fight we were asked, “Which Sony handheld was released in 2011.” The text from the four multiple choice answers fly over each fighter, and it seems you’re supposed to attack the correct answer. It’s strange, but it works, and makes for some really wacky fights.

The other three stages we saw were just as fun. The Hades stage starts out looking just like God of War, but the background transitions to feature scenes and characters from Patapon, cute cheering and song included. Another stage called Metropolis is straight out of Ratchet and Clank at first, with its moving platforms and conveyer belts, but then rain starts to pour, and a huge hydra pops up from the back to attack fighters. My favorite stage mixes a Jak and Daxter village with Hot Shots Golf. From nowhere, with no notice, Hot Shots characters begin using the play field as a driving range, with ultra-hot golf balls raining down on you and your opponents like missiles. These stages are so well done that I can’t wait to see what they haven’t shown us yet.

Most of the matches I played were frantic free-for-alls that had us hitting each other in any way possible in an effort to get those meters filled up. The action is fast and crazy, with all four players hoping around trying to avoid attacks as well as get off some of their own. Early bouts had us all on about an equal playing field, but as some learned the strengths and ranges of the characters, a divide quickly formed. We all soon learned that winners were always the ones that were able to get off the most super move attacks, and this realization had us all adjusting our approach. Attacks came even faster and players kept close to each other in an effort to fill up their super meters, making the action even more intense. 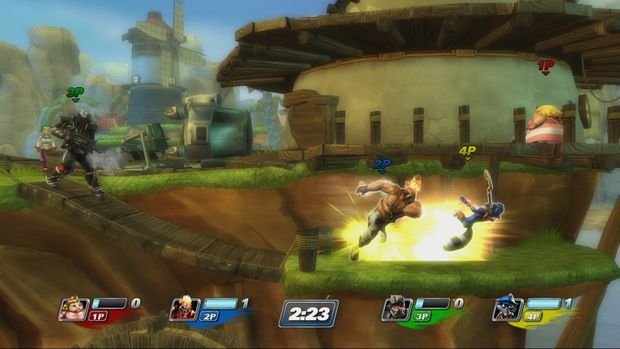 It’s a bit early to raise concerns about balance, but I already see a potential issue with the scoring being based solely on knockouts. Anyone outside of casual players will approach All-Stars knowing that it’s all about filling up that meter to use your super first, and then most often. It would make sense then that players would seek out the character with the most powerful level one super move, and in our play sessions that’s exactly what happened. We had a small tournament, and in the final rounds most people were using Parappa, knowing that his devastating skateboard super easily knocks out everyone onscreen. That said, there’s still more of the game we haven’t seen, and we’re probably not seeing the bigger picture at this point.

One thing we can get excited about already is the control, because it’s outstanding. SuperBot really nailed it. It’s fast, super-responsive, and never gets in the way of the crazy action. The in-air stuff is not floaty at all; jumps do what you need them to, when you need them to. I never had a problem blocking, platforming or recovering. From the dozen or so matches I played I can tell you that if you die, it’s 100 percent on you — the control is that tight.

After several matches I came away pretty excited about All-Stars. Smash rip-off? Who cares! It’s so fun that I’m not even drawing the connection anymore. It’s so easy to get in and get wrapped up that I found that a string of fights takes place before you know it. Even with only six characters and four stages I’m sure I could have played all night if permitted. The characters are are an obvious draw, and with their fantastic control you want to keep playing them. The mashed-up stages are also a riot, and are all eye candy to boot. If they get the balance down pat and add the right characters, PlayStation All-Stars Battle Royale will be a smashing success. I’m sure they can pull it off, as the foundation has already been laid for a great fighting game.