The Golden Age is Back

For the last decade or so, the first-person shooter genre has been dominated by the likes of Call of Duty and Battlefield. These two behemoths of gaming started a trend of “ultra-realistic” shooters that basically all play the same. You’ve got iron sights for more accurate aiming, regenerating health, incredibly linear level design, and a strong focus on an RPG-lite multiplayer system. This wasn’t always the way things were.

In the days of old, shooters were more focused on creating intricate, sprawling levels that required players to remember the location of locked doors as well as providing an arsenal of crazy weapons that had no practical use in real life. Enemies were also varied and required different tactics, unlike the abundance of hit-scanning enemies that populate the modern landscape. Multiplayer was more a skill-based affair instead of a measurement of the amount of free time you had.

DUSK harkens back to the golden era of PC shooters were things were blocky and pixelated, but also labyrinthine and absurd. To say I’m in FPS heaven would be an understatement, because I’ve been waiting for a real Quake successor since Quake II came out. 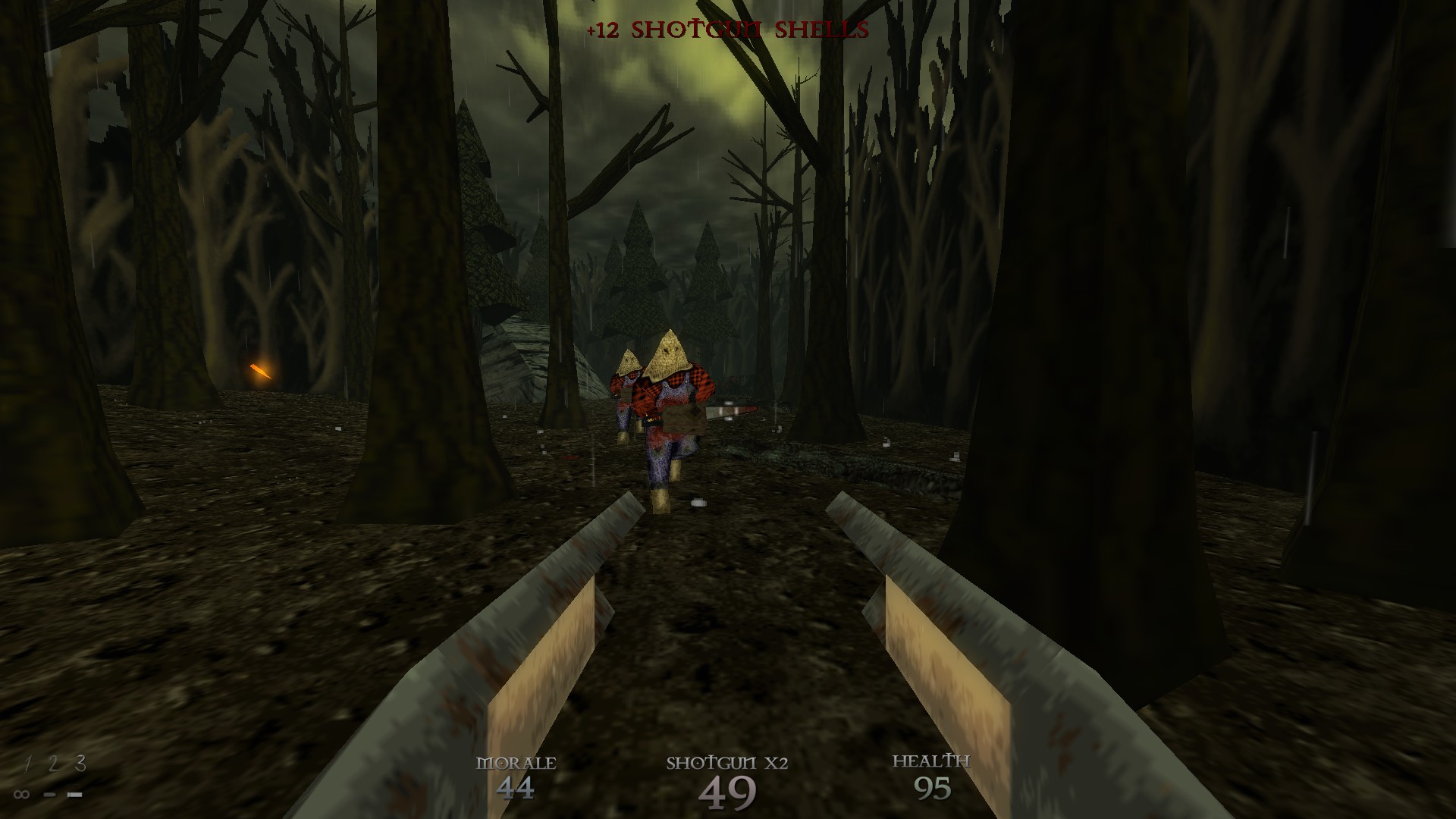 Upon booting up DUSK, you’re greeted with a mock-up DOS prompt that initializes the game. There are old CPU sounds, many random strings of text, and an assurance that DUSK is badass. It takes me back to the days of attempting to figure out obscure commands just to launch Duke Nukem 3D on my old Packard Bell PC.

Once in the game proper, you have the option of jumping straight into the action or tinkering with some settings. While DUSK is initially optimized to look very similar to the original Quake, you can actually turn on things like bloom lighting, depth of field, tweak the field-of-view, and cap the framerate to your monitor’s refresh rate. On that note, DUSK fully supports 240 hz (and everything in between) and is a fucking trip running that smoothly.

If you really want to replicate the late ‘90s, you can even pixelate the hell out of DUSK and get a pseudo-640×480 resolution going on. DUSK does actually support 4:3 resolutions, though, so you could always play the game pillarboxed and really get into the spirit.

That attention to detail isn’t lost on the main game. The very structure is separated into episodes, much like Wolfenstein 3D, Doom, Quake, etc. At present, the first two episodes are the only ones available, but a final episode will be ready for when the game officially launches. Both episodes feature wildly different themes, with special mention needing to be given to the second episode’s disregard for conventional level design.

Much like old-school shooters, DUSK is a key-hunting game with an emphasis put on winding pathways. While there aren’t really alternate routes, exploring the nooks and crannies will help better prepare you for the challenges ahead. Secret doors, walls, and paths will grant you power-ups like better weapons, extra health, or more ammo that will all be welcomed during the various shootouts you’ll be involved in.

For the first episode, DUSK is actually relatively easy. If you have any kind of familiarity with twitch shooters, you’ll be right at home with the ridiculous physics and amped-up speed. The AI basically just runs straight at you, though you’ll still need to prioritize targets based on their attack range and damage output. DUSK does a great job with its enemy design by having each foe be visually and audibly distinct (much like classic shooters). 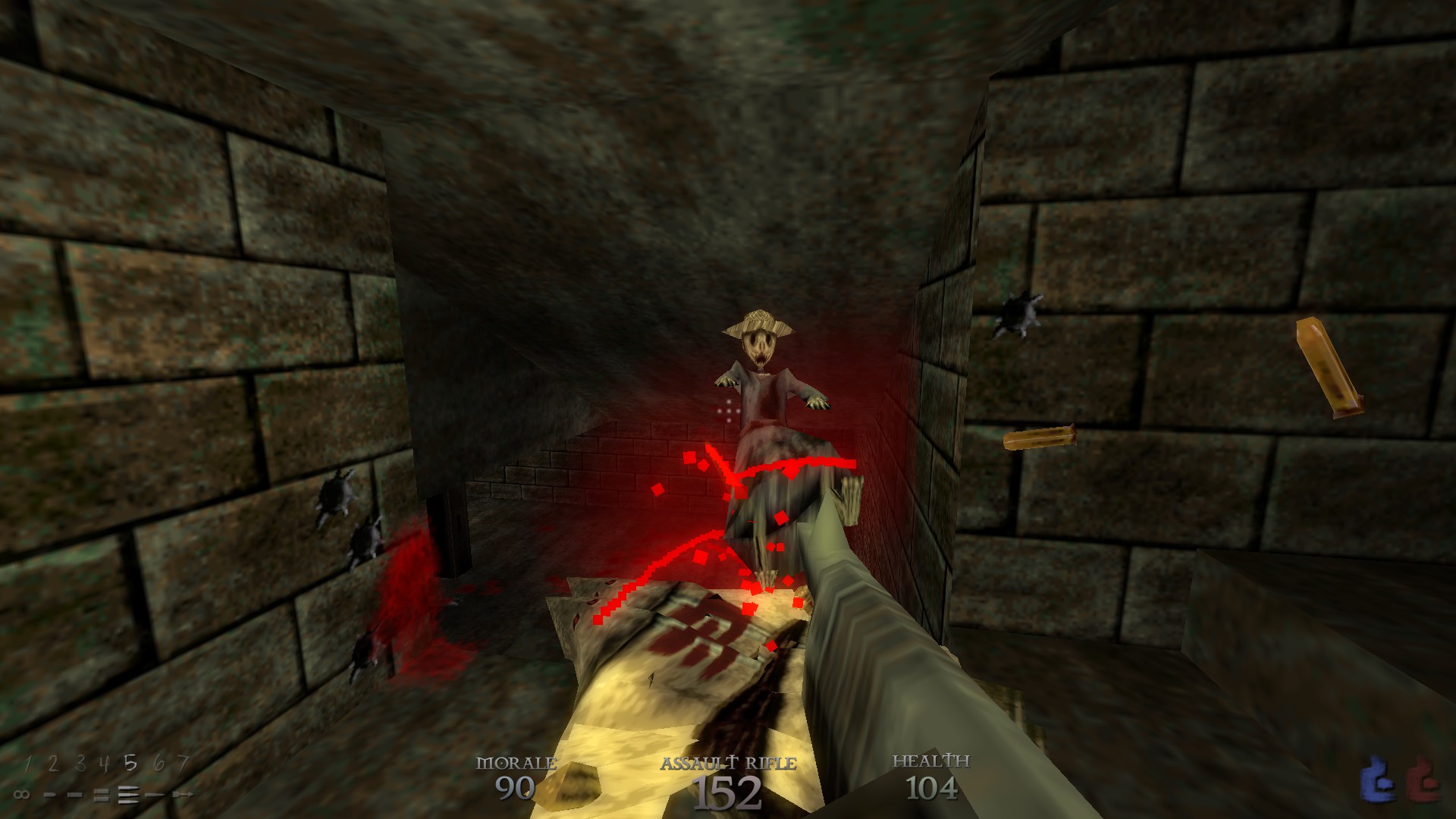 That being said, nothing in Episode One is ultra-taxing on your skills. The levels are relatively simple, enemies aren’t too plentiful, and there aren’t any trap doors or monster closets to catch you off guard. It is a great introduction to this new breed of old-school shooters. I jumped right in at “Cero Mideo” difficulty (the equivalent to Doom’s Ultra-violence) and it felt like I hadn’t lost a beat from my old Quake days.

Episode Two, on the other hand, ramps things up with more enemies, bigger levels, and even a couple of new enemy types. Sadly, some of the encounters rely on shock tactics to catch you off guard, meaning you’ll walk into a room and get blindsided by a wall dropping with upwards of 10 enemies behind it. It can feel cheap, but since DUSK is so old-school, quicksaving and quickloading is a part of the package. That helps mitigate some of the unfair balancing.

Even with the sometimes overly difficult enemy placement, Episode Two is just plain awesome. All of the levels contained are sprawling and feature some kind of new twist on the architecture. One level is even themed after M.C. Escher’s paintings, which is a real trip visually and spatially. If you thought this old-school style design philosophy got taken to its inevitable conclusions years ago, think again. 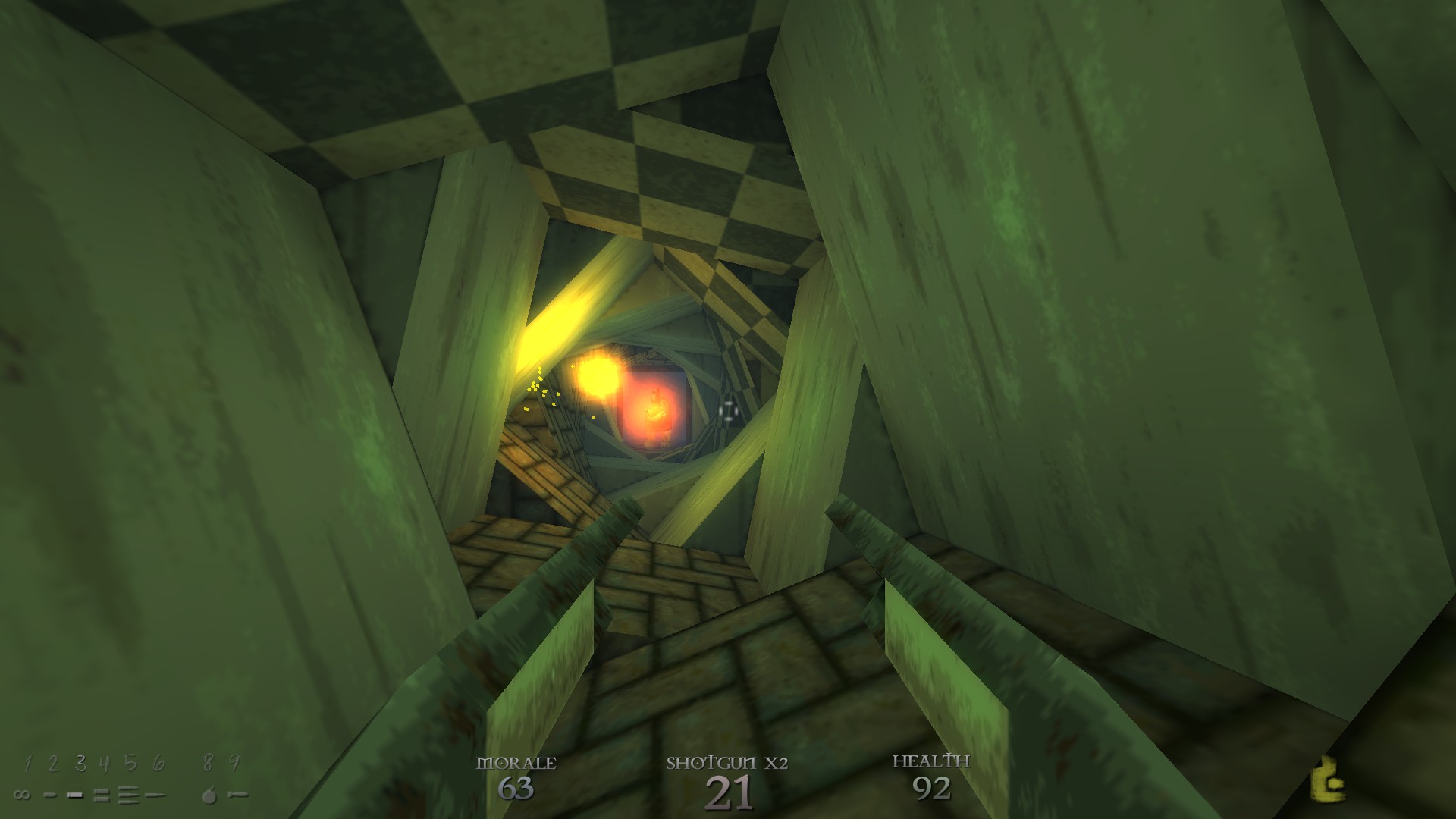 What would any of the level design matter if the weapons weren’t good? DUSK delivers on that front, too, with a seriously kick-ass double shotgun combo. While the weapons might be a bit conventional in terms of design, every gun has some great sound effects and different applications that make them stand out. They also really shine in DUSKWorld, the game’s multiplayer component.

One of the things I’ve always loved about old-school games (Unreal Tournament in particular) is that every gun is viable in any situation. While a guy with a rocket launcher might have raw damage output on his side, if he can’t hit you then you’re still able to gun him down with the pistol. DUSK perfectly captures that, since every weapon is pretty viable.

Since reloading wasn’t invented until 1998, DUSK doesn’t even feature that. When you press R, your character will just twirl his gun around like he’s a badass action star. I think it fits the atmosphere well and sort of encapsulates just what DUSK is trying to be. This is a balls-to-the-wall FPS from the good old days, whether you like it or not. 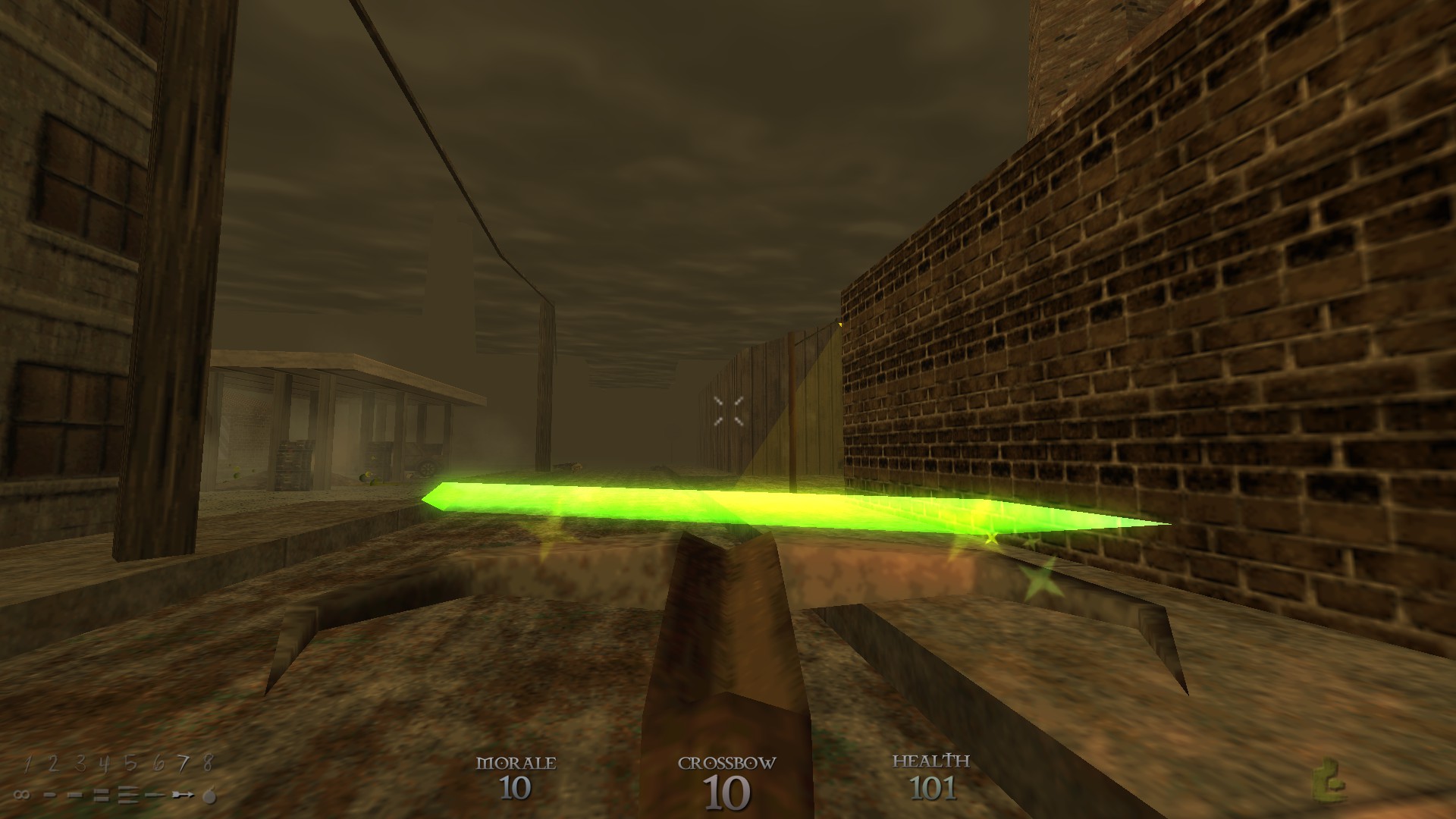 For being in beta, DUSKWorld works pretty well. It isn’t the smoothest experience around, but the maps are well-designed and finding matches is simple. I regularly played in populated lobbies and I found that retro bunny-hopping tactics are effective in avoiding oncoming fire. About the only thing that didn’t work out was the grenade launcher, since it lagged just a bit too much to become accurate.

DUSKWorld does have a lack of different gametypes, though. Currently, deathmatch is the only thing you’ll be playing and there isn’t even support for different teams. That isn’t the worst thing in the world (the original Quake only launched with the same mode), but it does highlight my biggest wish.

Mod support is not a part of the package and that has me a little bummed. All of id Software’s greatest games featured modability right out of the box, but DUSK isn’t quite there yet. I’m not sure if mod support is in the works, but that would be the cherry on top of this delicious old-school sundae. Hell, I can already imagine someone remaking Quake within the confines of DUSK and that has me giddy with excitement. 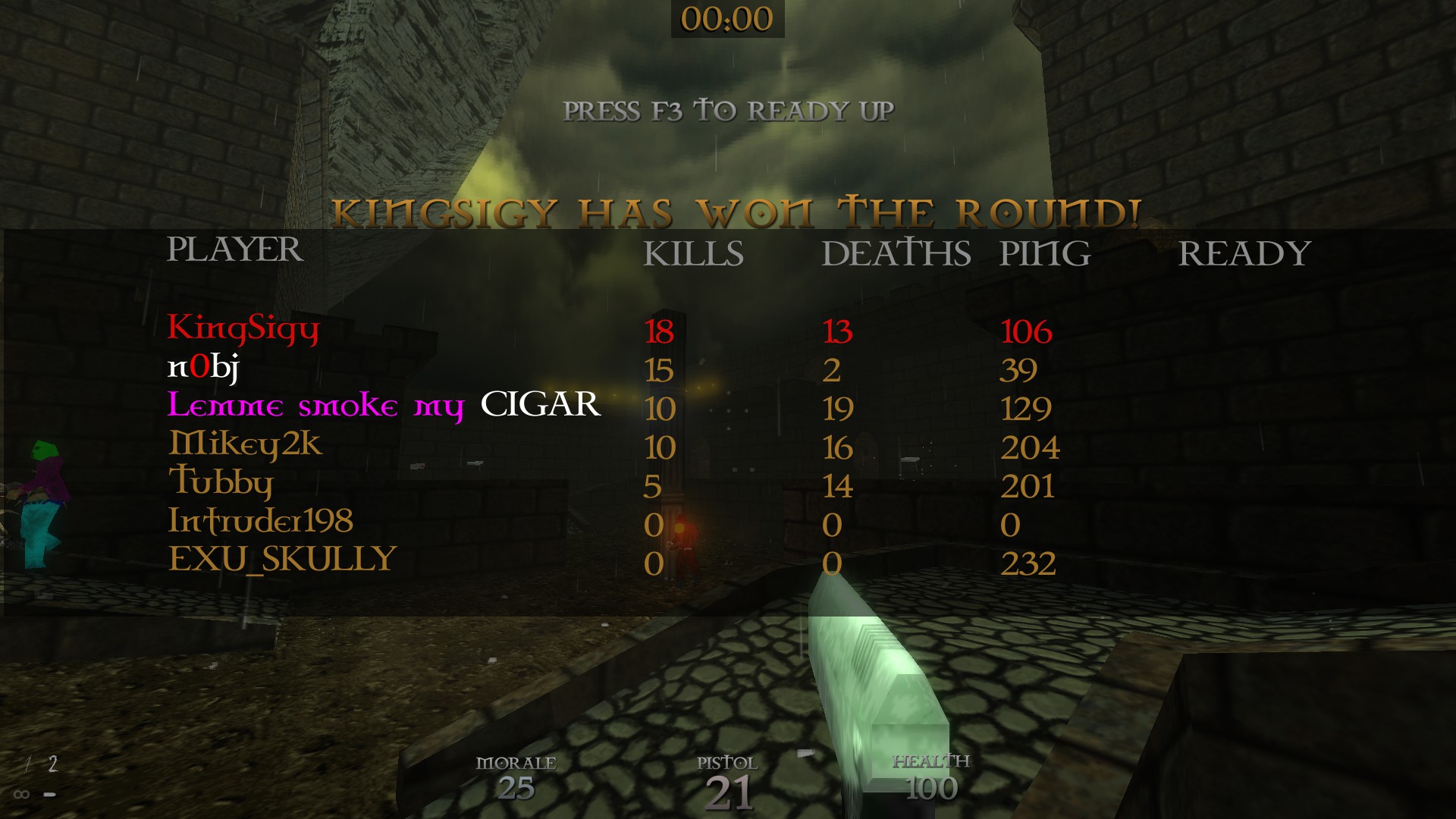 Even in its Early-Access trappings, DUSK is already well worth the price of admission. The multiplayer component works well enough and the current two episodes are so well designed that replaying them is a blast. I can’t wait to get my hands on the final episode and hopefully get some answers about who the DUSKguy is.

[This review is based on an early access build of the game provided by the publisher.]