Eight years. That’s a mighty long time, and it’s the last time Capcom delivered a “proper” entry into the Street Fighter series. But it’s not as if the 2D fighter has been out of the minds of gamers — iterations have been included in multiple “collection” titles, and even recently overhauled for Super Street Fighter II Turbo HD Remix.

So to say the series is “back” with Street Fighter IV is a bit misleading; Capcom’s never let us forget that one of their most successful franchises — one that started a genre craze — hasn’t really gone anywhere at all. With that in mind, I’ll say it anyway — it’s back, God damn it. If Street Fighter III alienated all but the hardcore with its somewhat-imposing (yet solid) technical style, Street Fighter IV straddles a fine line, accessible for more casual gamers while still appealing to tournament-play senses.

Hit the jump for our full review.

It’s easy to ding Capcom for sticking so close to its recognizable 2D fighting formula for something like 17 years, so it’s interesting to note that Street Fighter IV’s biggest strength is just that. It’s almost instantly familiar, and will feel like riding a bicycle to veteran gamers, as it will appeal to old-school-gamers-turned-casuals who have fond memories of digging around their lint-filled pockets for quarters.

At its core, the game is based mostly on Super Street Fighter II Turbo, so old tricks and tactics will be immediately employable from the first press of the start button. And nearly half of the game’s roster — 12 of the game’s 25 characters — are familiar faces from the classic and original Street Fighter II. Old staples like Ryu, Ken, Blanka, and Chun-Li all make an appearance.

The collection of World Warriors is rounded out by some newcomers — El Fuerte, Abel, Rufus, Crimson Viper, and big bad boss daddy, Seth. From a look and a feel standpoint, the new additions slide into the series just fine. While it’s easy to blow off some of the new characters as a joke — the ludicrous lucha libre antics of El Fuerte, or the bumbling fatty Rufus, for instance — their fighting skills speak for themselves. Rufus in particular is faster and more slippery than he looks, with a full suite of moves that are not only practical, but make him an extremely formidable fighter in the right hands. Familiarity will have you gravitating towards old standbys; curiosity will have you feeling out the newbies, and the payoff is almost always satisfying. 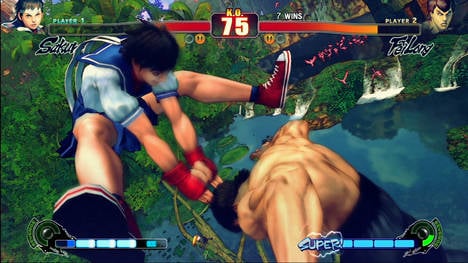 The surface familiarity of the roster and gameplay will hook you, but the new additions — the not-so-hidden layers of depth — will keep you trying to perfect your skills. The new “Focus Attack,” executed by simply holding two buttons, can be used to absorb and parry attacks. Charging that same move will have your fighter delivering an unblockable attack, one that will crumple and then stun your opponent. This then allows you to dash in and deliver a devastating combo. Using this same button combination, you can fake out your enemy and cancel out of a special move.

There are also two meters —  the “Super Meter,” which builds up as you perform attacks,  and the “Revenge Meter,” which builds up as you block or absorb damage. The juice from your “Super Meter” can be used to perform more powerful EX versions of your special moves, which is done by pressing two or more buttons along with your regular special controller motions. When the “Revenge Meter” is full, you can rock out a devastating “Ultra Combo,” what may be your last-ditch effort after being pummeled by your opponent.

The great thing about these new additions is the simplicity of their implementation. The multi-use “Focus Attack” is just pressing two buttons at different times, depending on your desired usage. And while the “Ultra Combos” and the EX attacks may require practice and timing, they’re usually based on existing skills and moves, so nailing them isn’t overly complex. It’s the usage of these moves and their timing that can make the difference, and it’s something that can be learned with repeated play and practice. But it’s a level of complexity that’s not necessary to grasp in order to enjoy the game; casual players will be able to take pleasure in the game at its most basic levels, with more intricacy woven into the gameplay for the hardcore.

Playing Street Fighter IV with others is highly suggested, either in person or in online (which I’ll get to a moment), but there’s a basic collection of single-player-oriented modes that you can use to hone your skills without any humiliation. Outside of the well-produced anime intro and ending sequences for each character, the game’s “Arcade Mode” is generally what you’d expect — fight-by-fight battles that eventually culminate in a battle against your “rival,” followed by a one-on-one with the game’s big-bad, Seth. 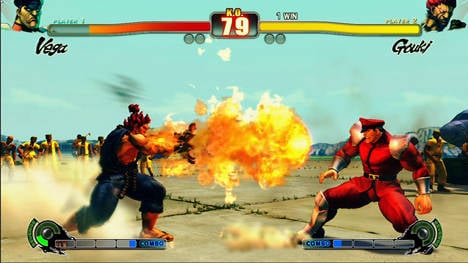 It’s already widely known that the game can be easily and quickly completed on the game’s easiest difficulty with one hand tied behind your back (and you may want to, if only to unlock characters sooner rather than later), but the “Normal” and more difficult modes can provide a decent challenge. Seth, in particular, lives up to Capcom’s long history of obnoxiously difficult and “cheap” boss characters. Round one against the tall, brawny grey freak is a breeze on most difficulties; round two will have him spamming teleportation moves, and rocking some seriously over-powered combination attacks that may have you attempting to crush your controller in frustration.

The game also features a very basic “Training Mode,” which is your standard “beat up a dummy” fare. It’s useful for practicing your combos and specials, but will teach you nothing; you’re on your own if you’re looking to learn more advanced techniques. Capcom has also included a handful of challenges — time trials and survival modes — which come in different flavors of difficulty, and are used to unlock things like costume colors and other little extras.

It has to be said that the preferred setup for Street Fighter IV play is one-on-one and in person, with a friend (or foe) by your side. Smack-talking. Shouting. Tears of pain. Tears of joy. The game is at its best with another human player, and its easy-to-play nature and classic feel evokes emotions many have long left in the early-to-mid-90s. But it is 2009, so of course Street Fighter IV features online play. As expected and hoped, it works as advertised, with the general caveat that how smooth the net play feels and runs depends on your Internet connection.

It’s unfortunate that online modes only seem to support one-on-one room setups, with basic and expected options — ranked play, quick matches, leaderboards and the like. As the game ships, there doesn’t seem to be a way to create a round-robin lobby, which means you’ll be forced into hopping from one game to another if you’re looking to vary your human challengers. It’s definitely cool that you can enable an option that makes it possible for friends to challenge you and join while you’re playing single-player Arcade mode, but it’s a bit disappointing that Capcom didn’t try to innovate in any way with its online competitive modes. 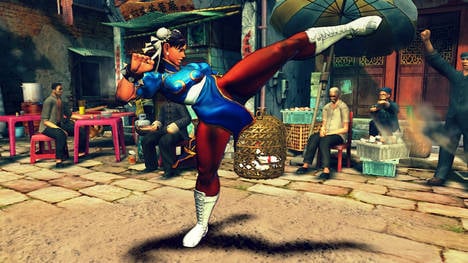 Visually, Street Fighter IV is a huge departure from the series, with a hand-drawn 3D look that makes it one of the most impressive-looking fighters in its own right. Hard black lines define the warriors, and the colorful palette used throughout is striking and vibrant. Particularly remarkable are the game’s animations, especially notable in the faces of the fighters, which contort and react as the battle rages on. Backgrounds are varied and alive, with more than enough going on that you’ll be picking out little details for months, like Balrog hanging out and cheering on fighters from the door of a rolling jet.

There’s been a lot of talk about the cringe-worthy English voice acting crammed into Street Fighter IV, and obviously, it won’t be to everyone’s liking. While the delivery isn’t particularly bad (it’s mostly videogame voice acting veterans, some who you might recognize), it’s a bit off-putting at times. Hearing Ryu shout out an obvious Americanized delivery of “Hadoken” might not sit right with longtime fans. Luckily, beating the game once gives you the option to change the audio to Japanese; you’re even given the option to pick and choose which characters speak English and which ones don’t. Even the obnoxious intro tune — a strangely catchy pop-rock inspirational tune about being “indestructible” — can be heard in Japanese.

There’s no doubt that Street Fighter IV is a must-buy for anyone interested in the thrills of one-on-one fighting competition. The mechanics are solid, attached to a game that’s fast and accessible, even if you’ve been out of the Street Fighter game for a few years. And despite its thin selection of modes, the core of the game is so remarkably solid that anyone with a passing interest would be a fool to pass up what’s clearly solidified itself as the new standard for the future of fighters.