I’m not sure what Dark Sector’s lead Hayden Tenno thought he was getting into when he signed up for the “elite black-ops agent” program, but it’s hard to feel bad for this guy. Sent by his agency on a dangerous assassination mission in the (very fictional) Eastern European war-torn city of Lasria, Hayden should have been prepared for anything. In this instance, “anything” means having his body altered by an infection that gives him inhuman abilities. You know, the usual — the power to become invisible, to generate a projectile reflecting shield, and to grow a boomerang-like blade out of his hand.

It’s these abilities that really set Dark Sector’s gameplay apart from other third-person shooters you’ve already played. But it’s hard not to immediately think of Capcom’s Resident Evil 4 when you pull the left trigger to aim for the first time, and the camera pulls in tight across Hayden’s right shoulder. Digital Extremes unapologetically snatch up elements of Epic’s Gears of War, with a similar cover system and a near-identical CNN-style camera “roadie run” mechanic. There’s even a hint of Ninja Theory’s Heavenly Sword’s “aftertouch” system that is used to manually guide Hayden’s blade-a-rang, the Glaive, through the air.

Hit the jump to find out if Digital Extreme’s obvious nods to “the greats” holds up on its own.

If you’re going to be so transparent about your influences, you’d better do it up right, and for the most part, Digital Extremes were up to the task. It all comes together well in Dark Sector, with these particular gameplay elements working as well here as they did in the games that perfected them. The cover system made popular by Gears of War is here, warts and all — it’s quick and simple to pull in and out of cover, but it’s just as easy to accidentally get stuck on cover while an off-camera enemy melees you to your death. It also appears that Digital Extremes tried to overcompensate for Leon Kennedy’s steady but slow hand in Resident Evil 4. The default aiming sensitivity will have you flailing all over the place, making accurate aiming near impossible; an early trip to the game’s control options to turn down the sensitivity was able to make things right, however.

The stars of the show here are Hayden’s infected powers, particularly the Glaive. While the narrative doesn’t really clarify why an infection causes a circular blade to emerge from a human’s hand, I’m not sure anyone is going to mind, because it’s just that damned cool. In one hand you can wield a pistol like you’ve done countless times before, and in the other, the circular saw of doom, which can slice an enemy’s torso clear in half. Or take off a monster’s head. The choice is clear. Take aim with the left trigger and let her fly with the right bumper. But don’t worry — it’ll also return to its master, taking out anything and everything along the way. 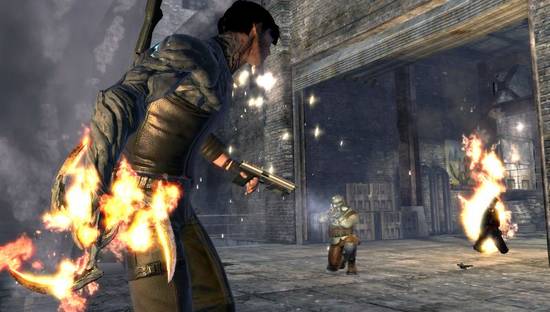 Besides the satisfying carnage, the Glaive feels like just another weapon in your arsenal at the game’s start. But as the infection seeps into Hayden’s body, your powers are upgraded, and the true potential of the weapon opens up. The Glaive can take on the properties of certain elements, for instance — electricity, fire, and ice. Not only will this do the expected damage to the game’s assorted baddies (there’s really nothing quite as rewarding as hearing a flaming monster howl to its death), but it’ll also be used to solve simple puzzles throughout the game. Don’t get it twisted — these aren’t brain teasers in the Myst sense. For instance, you’ll merely have to find a way to cause fire, which you can absorb into the Glaive, which is then used to burn an entrance to the next area. In conjunction with the Glaive’s aftertouch, some of these puzzles, while obvious, tend to get a bit tricky. This type of usage does tend to replicate itself throughout the game, and before long they tend to become rather obvious and repetitive, sometimes feeling like a nuisance more than anything.

For all of the greatness of the Glaive, there sure is a lot of gunplay in Dark Sector. You can carry up to two of your own weapons at any time, but ammo is scarce, something that was likely done intentionally to put a bit more focus on the usage of the blade. So more often than not, you’ll find yourself having to rely on the Glaive simply because your clips have been emptied, and less because you really want to. It feels great when you’ve aimed precisely to decapitate an enemy, but having to wait for the Glaive to return can sometimes be a lesson in patience, especially if you’ve missed your target. Well-placed bullets can drop most enemies and monsters within seconds. Considering the game features so many duck-and-cover shoot outs, I found myself wanting to get right down to the killing, style be damned.

The Glaive also has the ability to pick up faraway items, and while it could have just been more of a gimmick than anything else (“Hey! That ammo is across a chasm! Let me use this here boomerang to get it!”), Digital Extremes made a pretty clever design choice with this capability. The game features many open-area firefights, and you’ll often have to pick off enemies from a distance, many of which drop weapons. Considering the previously mentioned scarcity of ammo, you’ll want to get your hands on these weapons, and by using the Glaive’s pick-up-and-return ability, you can. Gunning down a crew of soldiers using their fallen comrade’s rifle gives an interesting feeling of sweet revenge. You can’t simply stock up on these weapons, either — when out of the hands of the soldiers, the weapons will only last so long before they no longer function. Again, this places an interesting emphasis on Glaive usage in an attempt to make Dark Sector a bit more than a series of hectic shootouts. 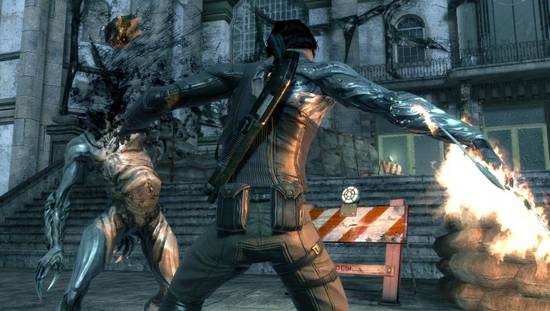 Unfortunately, that’s just what Dark Sector really is — ten chapters of Wild West-style shootouts. There are a few surprises, including huge boss battles that make good use of the infected abilities, and a few areas that’ll put you in control of an enormous mech. But things do start to get repetitive after awhile, particularly towards the game’s end, when you’re bombarded by wave of enemy after wave of enemy. Luckily, the game comes to an end sooner rather than later — it can be completed in about seven to eight hours — and it culminates in a fairly clever (yet considerably easy) boss battle. While the game could have stood to have some more diversity, Digital Extremes were smart to bring the game to a close before it wore out its welcome.

Without a doubt, Dark Sector features some of the best textures and lighting in any next-gen game to date. Digital Extreme’s in-house Evolution Engine rivals anything we’ve seen from its competition, even Epic’s impressive Unreal Engine 3.0. The ambient lighting is absolutely incredible and the best I’ve seen on consoles, with fire and bright bulbs casting impressive and fitting shadows throughout the environment. There are times when the game’s visuals will make your jaw drop to the floor, and you’ll swear you’ve never seen anything like it. But then you’ll catch glimpses of some weird shiny hair, or Hayden’s fat baby face, and it’ll make you’ll wish maybe the sector were a bit darker.

The game’s art direction is a mixed bag too. The fictional Lasria looks how you’d expect an Eastern European city torn apart by war and monsters to look, and the detail seen in the environment is impressive and hard to ignore. But Dark Sector suffers from a case of the blues … and greens and browns. That’s about it, really, and while I didn’t expect sunshine and daisies to rain from the sky in the game’s seventh chapter, the game’s color palette starts to make everything look identical before long. 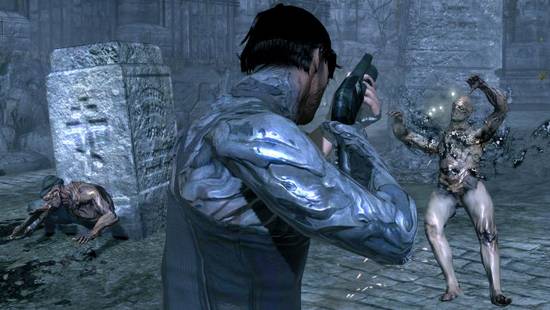 It has to be said that I think Michael Rosenbaum should do voice work for more video games. Despite some goofy and over-the-top dialogue, the Smallville star nails his lines with effortlessness and an evident skill. The rest of the cast holds up reasonably well around him, but his convincing delivery of Hayden will keep you tuned into the otherwise middling story of betrayal and government cover-ups. It should also be noted that soldiers who are killed sometimes make a similar noise to that of dying enemies in Sega’s Golden Axe. Take that how you will.

As far as replay value is concerned, completing the game will unlock a “brutal” difficulty level. But beyond grabbing some achievements on the Xbox 360, I can see little reason to trudge through the game again immediately after the credits roll. The game does feature a “Black Market” weapon purchase/upgrade feature, but it’s impossible to even come close to seeing all of the weapons and upgrades while making your way through the game’s linear missions. While it’s possible that you may want to play through the game again to see what you’ve missed, it seems likely more of a hassle than anything else. The game does feature a small multiplayer component, with two mode types and a small selection of maps. Multiplayer is an obvious afterthought in Dark Sector, and shouldn’t be considered the game’s main draw, although future content could make it more appealing.

Ultimately, Dark Sector is a fun if slightly derivative third-person shooter. It certainly isn’t close to perfect — the melee is kind of wonky and disappointingly underdeveloped, it suffers from a fair bit of repetition, and the enemy A.I. is only somewhat smarter than the girls on Flavor of Love. But the infected powers, the occasionally dazzling visuals, and Michael Rosenbaum’s sweet, sweet voice definitely make the game worth a look if you’re a fan of the genre.