The 2TB model is out now

Microsoft had a lot of catching up to do.

I’ll spare you the history once again of how badly it bungled the announcement of the Xbox One, but since then, it has made strides. The UI is a lot better than it used to be (especially now with the recent Summer 2016 update), Xbox 360 Games with Gold acquisitions don’t expire when your subscription runs out and now all work on Xbox One, there’s a concerted effort for backward compatibility as a whole, and Microsoft has made near-unprecedented advancements in terms of its controllers.

It’s in good shape. Especially so with the Xbox One S, even if it can be comfortably labeled as a luxury item. 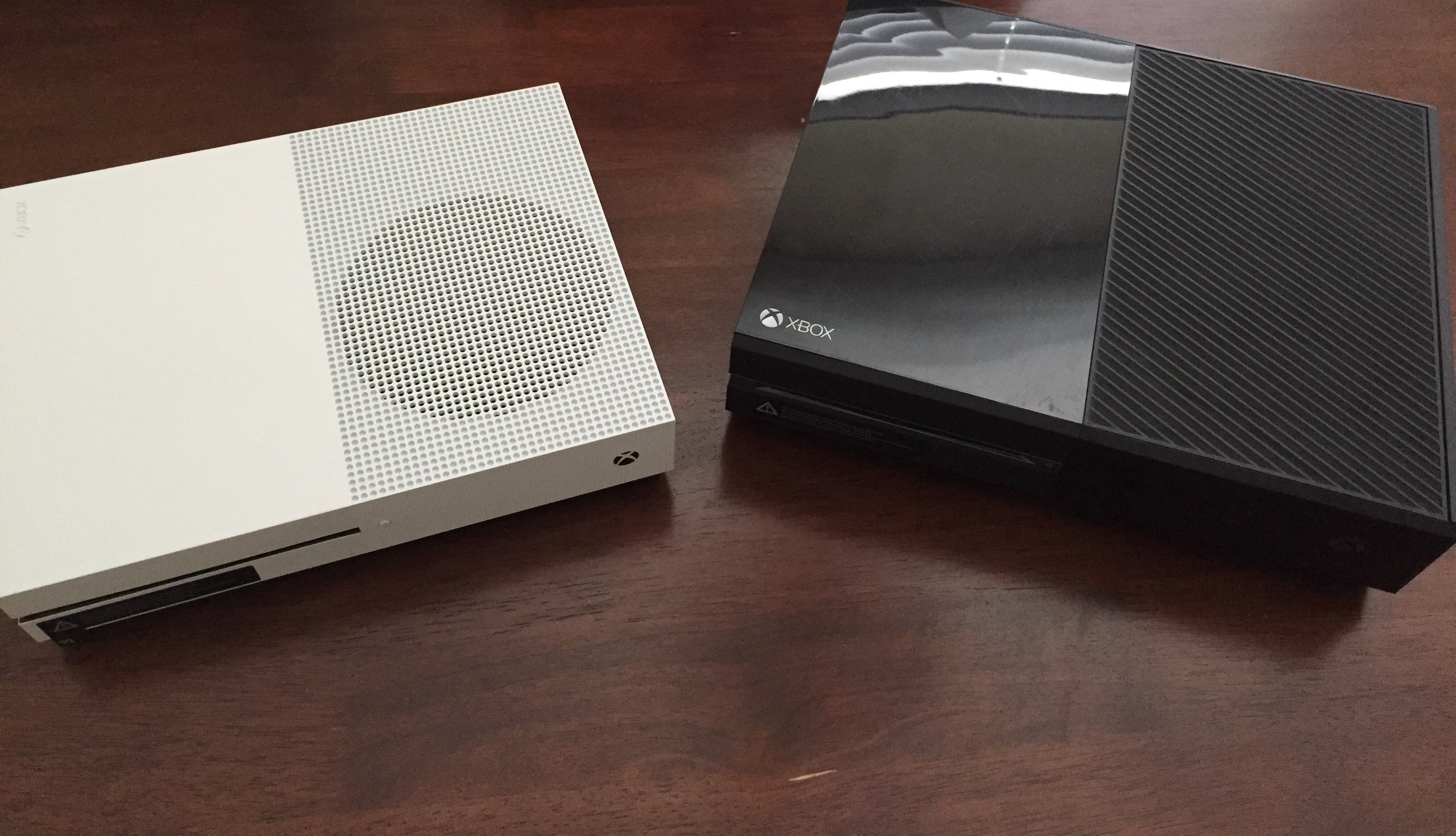 After seeing it in person, the “40% smaller” case of the S doesn’t seem like that big of an improvement on the original (feel free to judge for yourself with comparison shots in the gallery below). The “Robot White” scheme is appreciated though, and a fun callback to the original Xbox 360. There’s also an optional stand to prop the console up vertically (which is nice if you’re cramped on space). All nominal-type stuff.

There are a few useful alterations, though. The built-in power supply is very nice, and eliminates the need for an unseemly power brick. The cable itself can be an issue depending on your setup as it has slightly less slack, but I didn’t need to adjust my console’s position at all.

I’m torn on the tactile power and eject buttons instead of a nebulous “touch” location on the original Xbox Ones — I enjoyed the idea of rubbing my finger across the surface and having it do something, and anything is an upgrade compared to the awful PS4 power and eject alignment. In the end, the new buttons are plain, but functional. I’m getting used to them.

Microsoft also switched a USB port from the side to the front (as well as the pairing button), which is just as well. Initially I liked that it would hide extra wires if I was rigging up something that would be hidden behind the console (like a Rock Band wireless guitar adapter), but if something was side-by-side on a shelf with it, it would sometimes be hard to jam it in there. That’s no longer a problem — but I still would have preferred more USB slots.

In terms of storage, the 2TB model ($399) is basically more than almost anyone needs. Even I haven’t filled it up with the library that I’ve acquired reviewing games in the nearly three years the Xbox One has been out. Plus, you can always attach a good external solution. Microsoft is also selling 1TB ($349) and 500GB ($299) models, which I recommend picking up over the 2TB. 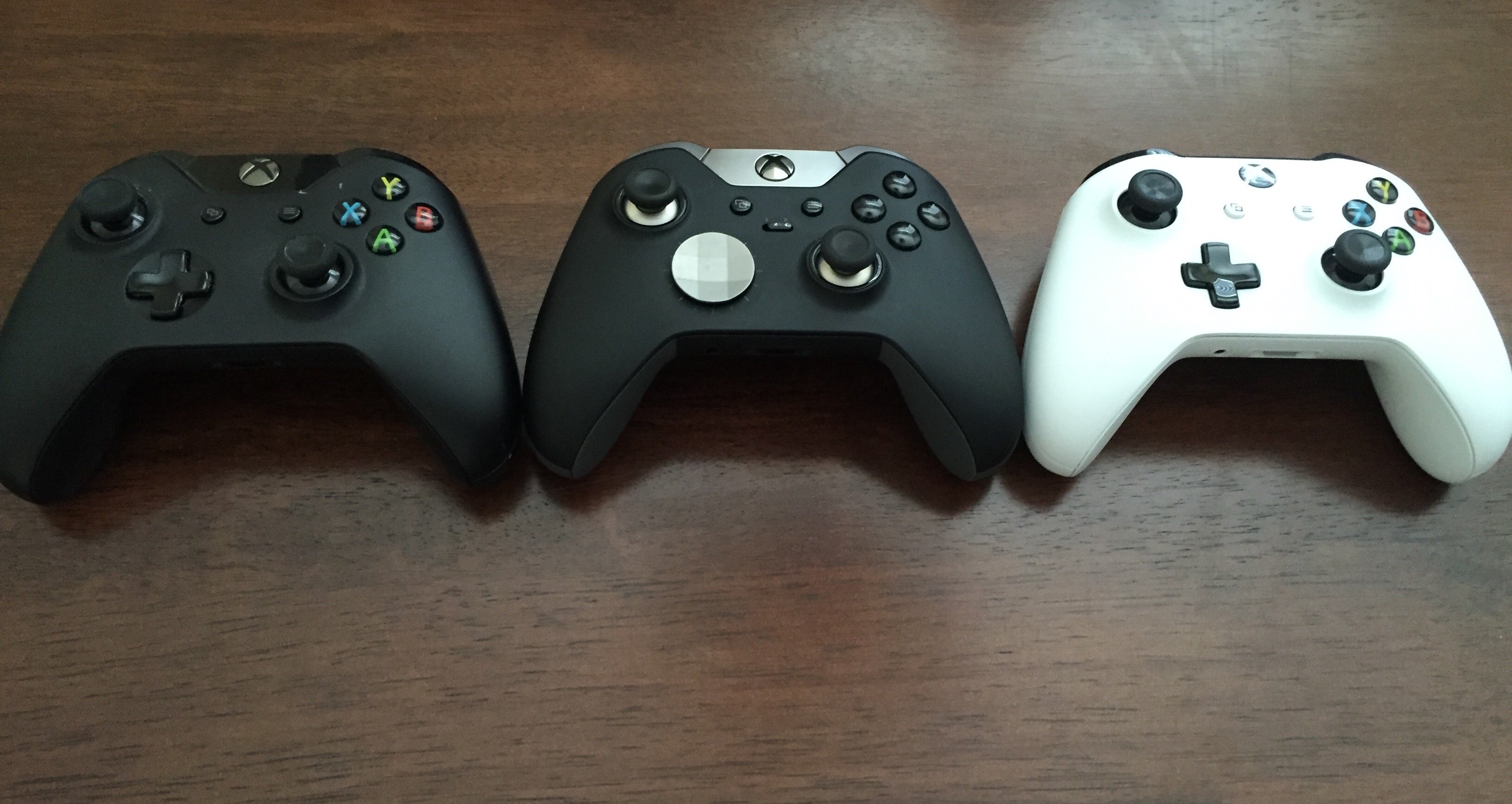 I’ve already talked about the new Xbox One S controller with added Bluetooth support and better grips, but having used it for roughly a week, I’m an even bigger fan. It’s no Elite for sure, but it does feel slightly better than the original line, and it’s become my new go-to for PC use as I keep my Elite paired to my console. Updating controller firmware wirelessly (which Microsoft recommends you do for the S model, so it gains access to Bluetooth support) is much more convenient than the olden style of connecting it.

The new S controller is packed-in with the S console, but it’s also being sold separately for $60. 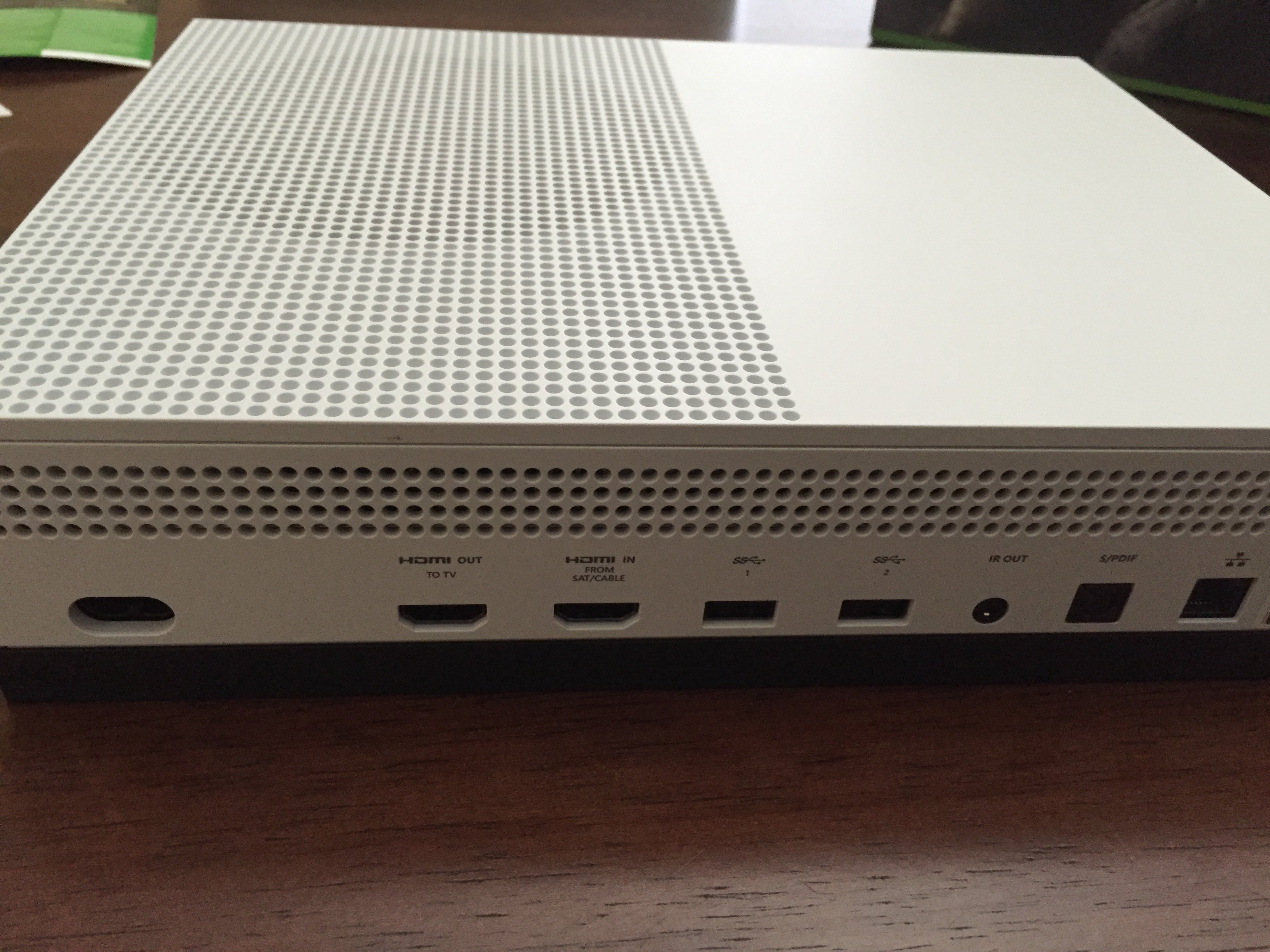 Microsoft has been slowly pushing the Kinect out the door and I don’t blame it. Some developers like Harmonix embraced it, but others hated the idea of giving away more processing power to the device (many studios claimed this was the chief reason a lot of Xbox One games were 720p compared to the PS4’s 1080p).

But the Kinect situation is in an even tighter spot with the S somehow. In an effort to save space on the back of the console, the “dedicated Kinect port” has now been eliminated (directly compare the back of the Xbox One S with the back of the original). Instead, you’ll need to use an adapter, which takes up one of the precious few USB ports if you want to utilize the newly minted Cortana support by way of the Kinect. You can apply for a free adapter here if you’re qualified.

As a sort of aside since there isn’t a lot to muse on with the Kinect, the transfer process (read: logging back in and re-installing all my stuff) was once again painless. I’ve done it before after picking up a second Xbox for my wife, and it was extremely easy to get back up and running given Microsoft’s cloud save system. 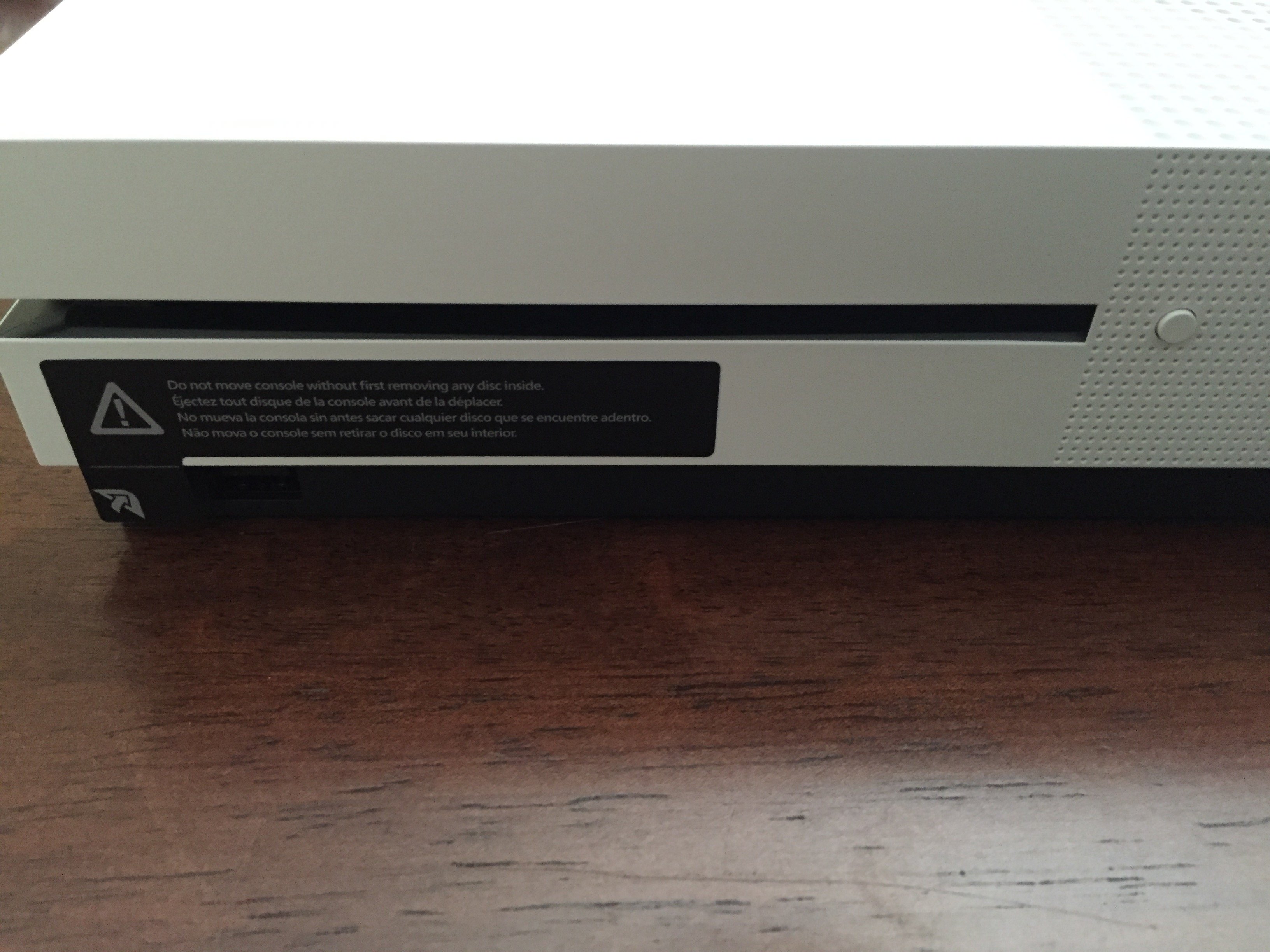 I feel like this is going to be a massive point of contention this year, and it’s an area I’ve researched extensively, so here goes.

4K content is currently in its infancy, and it’s confusing as hell. Sony, as a rule, advertises correct information on its 4K sets, but a lot of companies don’t. For example, you might see nonsense like a “120Hz true motion rate” claim on a 4K TV, which in reality, means “upscaled 60Hz.” The general public has a tough time discerning the differences between models (especially 2015 ones), and in some cases, the upgrade from 1080p to 4K is marginal if you don’t get the right one.

But generally speaking HDR is the real golden goose, and is future-proof, for now. HDR stands for “High Dynamic Range,” and in short, it makes the picture look better by bringing out better light and dark hues. UHD (4K) Blu-ray discs actually contain metadata to facilitate HDR viewing, making the picture look better. Where am I going with all this? The Xbox One S supports HDR for video playback.

As part of the review process, I was given a UHD disc of Star Trek to try out, and I also own a UHD Blu-ray of Batman vs. Superman (I wanted to see the extended cut as my first viewing) — and I’m pretty happy with the picture. To be clear, an original Xbox One (or other console for that matter) simply will not recognize a UHD movie disc. The Xbox One S will load and play the movie, even if you don’t own a 4K TV.

Just like the PS3 was a decent investment in the early era of Blu-ray, so too is the Xbox One S if you can score a cheaper model with less storage space — because right now, UHD Blu-ray players range from $150-$300 on their own (upscaler players are cheaper, but are not true 4K). Netflix has 4K content now, and Amazon will have it “shortly” on Xbox One (both already offered it elsewhere earlier this year).

It should also be made crystal clear that games have not made their way into the realm of 4K yet —  the Scorpio is the first real attempt at that, and that’s not even coming until late next year at the earliest. Microsoft claims that Gears of War 4, Forza Horizon 3, and Scalebound will make use of the aforementioned HDR capabilities of the Xbox One S, but that remains to be seen as none of those games are actually out yet. I told you it was confusing.

In short, it was nice watching HDR movies on the Xbox One S, but since it’s still early yet, you probably don’t want to look at getting a 4K TV until this holiday season or beyond when you can pick up cheap versions of this year’s HDR and (real) 120Hz models. 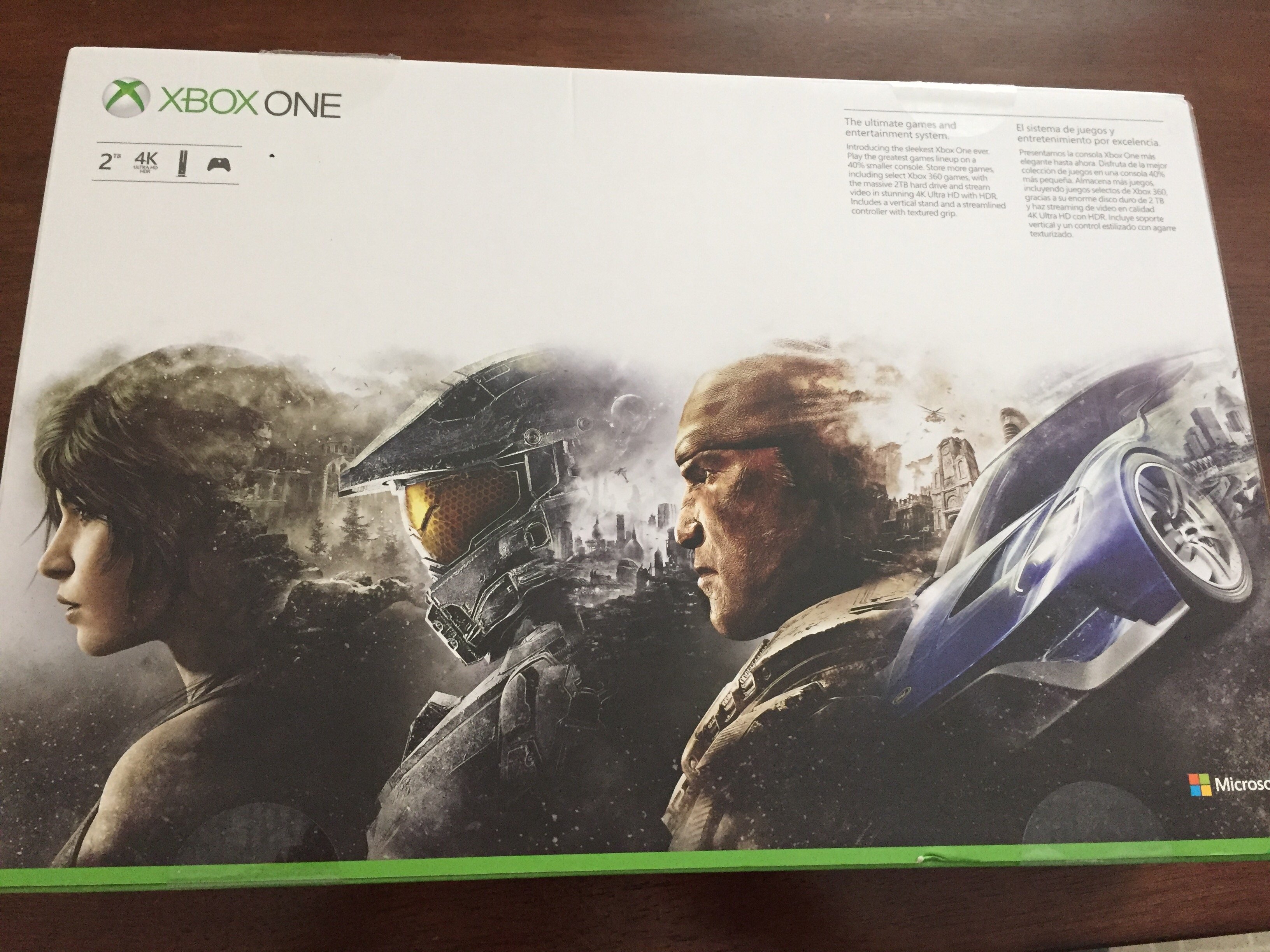 The Xbox One S is a lot like the Elite controller — a bonus.

Those of you who don’t already own an Xbox One will probably be better served by picking up an older model at a discounted price and slapping an external HDD on it. If you do have one, odds are you probably won’t want to snag an “S” unless you really love the Microsoft ecosystem.

I can only speak from personal experience, but I’m one of those people. Backward compatibility completely swayed me into choosing the Xbox platform for most of my multiplatform needs, and with the future-proof HDR compatibility, the Xbox One S should be a staple in my entertainment setup for a long while.

[This review is based on a retail build of the unit provided by the publisher. The 2009 Star Trek film was also provided in UHD disc format to test the 4K features.]