Another chapter in the Telltale Games’ Tales of Monkey Island episodic series was released yesterday afternoon. Chapter 3, or the “Lair of the Leviathan” kicks off as a powerful whale swallows the whole of the Screaming Narwhal. Mighty pirate Threepwood never has it easy, eh?

The previous chapter was a bust, perhaps lingering too much on item collection and exploration on top of a confusing map. The latest chapter is nothing of the sort. Clear and confined, this downloadable treat captures the MI vibe once again and focuses on character interaction and simple item exploration.

Of course, I won’t give it all away. Hit the break for the review. 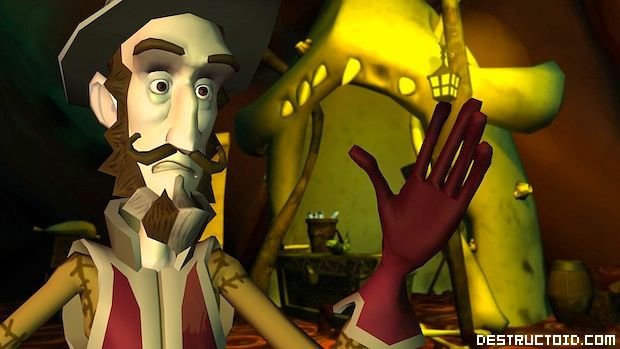 As with most episodic series, this chapter launches from the conclusion of the last chapter, “The Siege of Spinner Cay,” in which, at the end, players watch the Screaming Narwhal being swallowed by a massive whale. In this chapter, “Lair of the Leviathan,” Guybrush meets the explorer De Cava and his crew, who have separately established a Brotherhood of sorts within the bowels of the beast. With La Esponja Grande still on his mind, Threepwood must make a few new friends and get the hell out of the lumbering beast.

The last chapter in the Tales of Monkey Island series brought the player a more open-ended, exploration-fueled experience. While the charm and other hallmarks of the classic series were still present, the chapter gave us a few fits, specifically when it came to untangling the web of puzzles layered on top of the confusing navigation elements. This chapter is different. It is a constricted experience, akin to the opening chapter in the series. Think Flotsam Island … inside of a whale. This linear approach lends itself to the things Monkey Island does right: dialogue and character-centric puzzles. This is almost as much a classic MI title as it is a new one, so veterans of the series will be more inclined to love this Telltale treat. 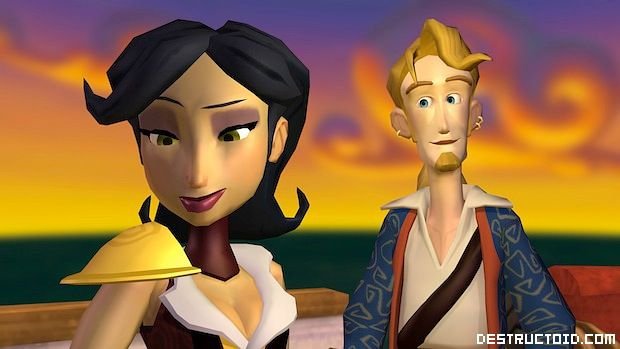 With ancient constructions come ancient qualms. Introduced in this chapter are two creative spins on Insult Sword Fighting. The first will have players collecting a various amount of pirate “AAAR!” faces in order to do battle — the more original the face, the better. The second has players responding to another character with a set variety of dialogue choices. While genuinely humorous like the insults in its predecessor, there’s a measure of frustration as a multitude of very similar responses are presented. It can become more confusing than it should be and thus the witty-edge is stricken from the dialogue.

The narrative focus of this chapter means there is no substantial navigation. In fact, there are only five or six different screens to visit. A bummer on the surface, this doesn’t detract — it enhances. Now cemented in the plot, the relationship between Guybrush and Morgan LeFlay flourishes within the confines, presenting an awkward parallel to the early connection that the feisty Elaine Marley and Guybrush had.

On the subject of relationships, this apparent theme is enhanced by the appearance of Elaine and the once-voodoo-ridden pirate LeChuck on the deck of his boat, as well as the little scene between De Cava and the Voodoo Lady. 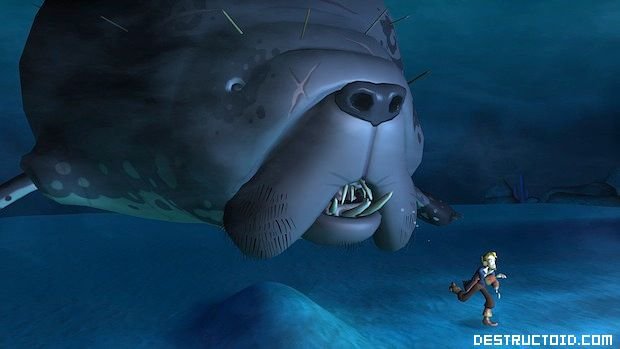 In transition, Guybrush remains an idiot. The world remains quirky and colorful, and the peripheral characters are still just as over-the-top. Like with the first chapter in the series, this chapter sticks with what makes Monkey Island, well, Monkey Island. Don’t expect any sudden overhauls here, either with controls or gameplay, despite the focus on new characters.

This latest chapter is a good follow-up to an otherwise disappointing second chapter. The back-to-basics dialogue choices, Insult Sword Fighting style of puzzles, as well as the confined interactions, make for a much more pleasant experience. New fans of the series should enjoy this one, while older fans may even adore it. The same old MI problems are present, but not a major distraction. Check this out (especially if you like disembodied skeleton-heads).