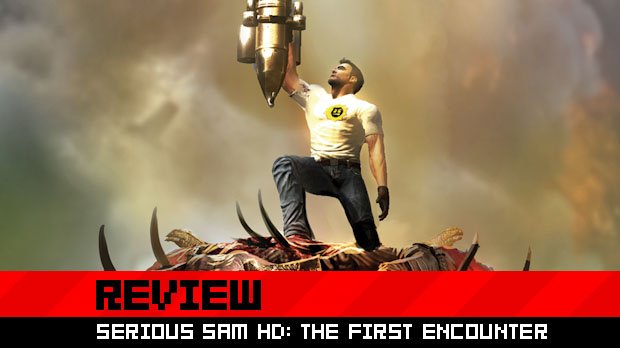 Screw Duke Nukem. Sam “Serious” Stone is the real king of first-person-shooter meatheads and if anybody deserved to make a triumphant comeback, it was him. Sure, Sam may not be quite as high profile, and his games may not be quite as refined, but at least Sam’s adventures are released on time, and who needs refinement when you’ve got headless men running toward you with bombs in their hands? 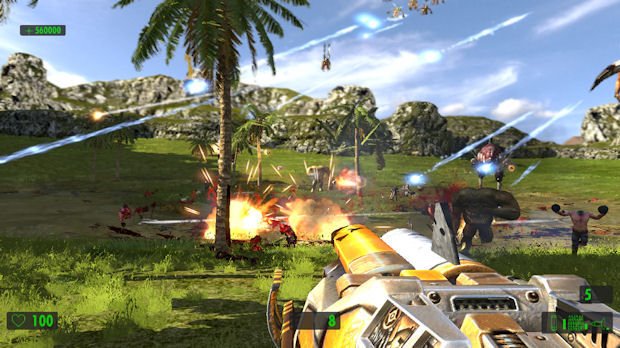 Nobody will ever accuse Serious Sam of being a complicated game. In fact, as first-person-shooters grow more and more complex, The First Encounter feels like a simplistic island of calm in an ocean of convoluted gameplay gimmickry. The concept behind Serious Sam — a concept that it sticks with religiously from beginning to end — is incredibly easy to grasp: There are big guns. There are big monsters. The big monsters need to be shot with the big guns.

The First Encounter is as close to purity as one can expect. While modern shooters experiment with perks and parkour, Serious Sam refuses to surrender the principles of the early nineties. Health packs are liberally strewn around in a mockery of regenerative health mechanics. Shields are offered like they didn’t go out of fashion five years ago. The most complicated this game gets is giving you the occasional button to press in order to open a door. It’s not rocket science, although rockets are generally involved.

The only thing the player has to be concerned with is endlessly firing shotguns, lasers, miniguns, cannons and grenade launchers at waves upon waves of demented enemies. Be they galloping skeletons, charging bulls, or giant brains on metal legs, the twisted bestiary hurls itself at you at every turn. All you need to worry about is keeping the trigger held and making sure to avoid the endless stream of projectiles and claws that fly your way. 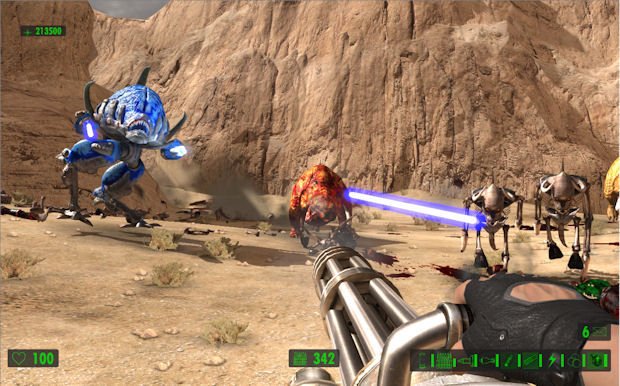 Just because Serious Sam is simple, however, that doesn’t mean it’s easy. In fact, if you’ve never played a game in the series before, be warned now — this thing is insanely tough. Not only are the enemies numerous, they are also formidable, with just one monster fully capable of reducing your health by tens, let alone the hundreds of enemies that will constantly bumrush you, fire homing projectiles at you, or tear you apart with chaingun fire. At times the game can feel overwhelming, even impossible, and I must confess that I eventually left solo shooting behind when I faced what must have been a thousand charging skeletons.

Fortunately, the single-player is not the main event in The First Encounter. If the campaign is too overwhelming in single-player, you can always call for help and tackle the forces of evil with up to sixteen other players. Not only does this make the game more manageable, it’s also ludicrous amounts of fun, turning the game into something more akin to a giant war than a traditional shooter.

Armed with multiple allies (not the mention the ability to respawn), Serious Sam becomes less about worrying over health levels and ammo conservation, and more about simply blasting everything in the way, which is what Serious Sam should always be about. Thanks to the general chaos of the game, having so many people play co-operatively never feels confusing. What’s to be confused about? You just shoot stuff. All the time. 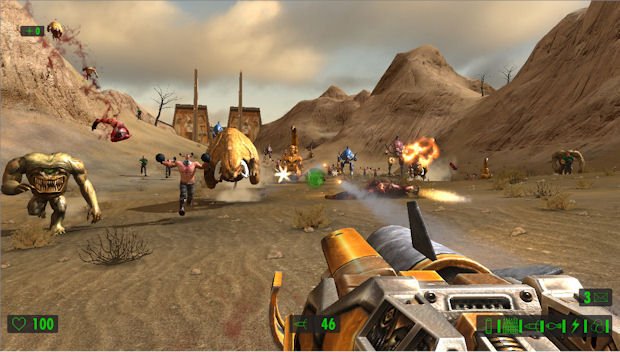 One major gripe, however, is how stingy the game can sometimes be with ammo, especially for the guns that are actually useful. In a game like this, where constant, intense shooting is the only objective, not providing enough ammo for the decent weapons doesn’t feel right. There are loads of pickups around, certainly, but never quite enough to deal with the masses that charge your way. Unless you’re using the shotgun, which seems to constantly have ammo available for it, but feels less and less useful as the game goes on.

The game can feel repetitive of course, since you’re doing the same thing over and over again, and impatient gamers will get tired of the game before its relatively short campaign is through. However, it’s the perfect stress toy, the kind of game you can dip in and out of when you just need something to kill. It’s unrefined and it’s uncultured, but it’s very good at what it does — giving you the perfect venue to let off some steam and just murder everything you see. 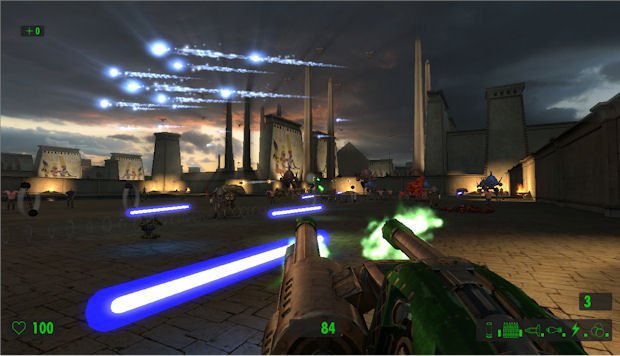 As far as the HD improvements goes, the difference is very obvious. Even compared to later Serious Sam games, The First Encounter looks really impressive. Sure, it’s not Killzone 2 or Modern Warfare 2 in the visuals department, but as far as remakes goes, this is definitely one of the better HD paintjobs I’ve seen. It’s bright, colorful and clear, and the monsters especially look great in their shiny new togs. The sixteen player co-op mode works out great too, with games considerably quick and easy to get into. My first few experiences were met with some pretty bad lag, but the general experience has been smooth and sleek. Some form of versus play would have been welcome, but the co-op is more than enough fun.

Serious Sam HD: The First Encounter is a great purchase for both fans of the series and newcomers. Those who have grown up on modern shooters may find the primitive design and simplistic objectives a bit jarring, but the purity of the gameplay simply has to be respected. It looks really good for what it is, and the hardcore, old school shooting action is just as robust as ever. Whether you have a gaming PC or Xbox Live, it’s highly recommended that you pick this one up. There are fewer examples of solid, instantly gratifying gameplay that you can buy for the money.