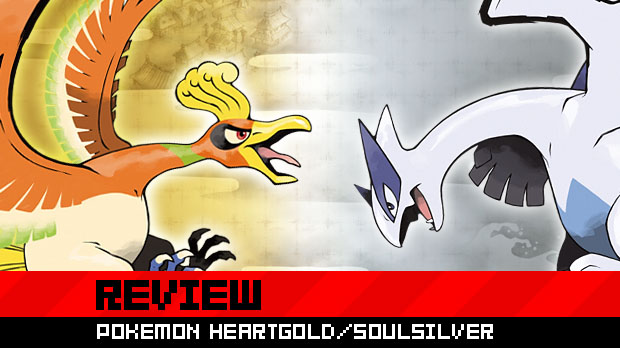 The second generation of Pokémon, encompassing the Gold and Silver games, is considered by most fans to be the pinnacle of the franchise. This generation brought more monsters before the designs started to jump the shark, and new ways of deepening the experience before later games became too convoluted and desperately complex.

There’s no way Nintendo wouldn’t want to cash in on that.

So behold, Pokémon HeartGold and Pokémon SoulSilver, the final evolutionary stage of these classic games. New graphics, Wi-Fi connectivity, and the all-new Pokewalker converge to make this the ultimate Pokémon experience. But just how ultimate is it? Ultimate enough to warrant your time and cash? To find out, read our Pokémon HeartGold/SoulSilver review! It’s super effective!

If you’re familiar with the original Silver and Gold games (or, really, any of the Pokémon titles), then the backbone of the gameplay remains the same. As a budding young Pokémon trainer, your job is to traverse the Johto Region, collecting Gym Badges, defeating Team Rocket and catching ’em all in your bid to become the world’s greatest Pokémon master. Nothing you haven’t seen before, yet it still feels fresh and full of innocent discovery, in the way that only a Pokémon game can.

Everything that made Silver and Gold so good has been brought over faithfully. Breeding, Apricorn gathering, the night & day mechanic, getting bothered on the phone by some dick who constantly needs to tell you he knocked out a Weedle, and all your favorite Pokémon have made their way to the DSi, as entertaining as they ever were. The only downside is that a number of the convoluted things that helped bog down later Pokémon games appear to be prevalent in these remakes. The Pokémon behave how they do in Pearl and Diamond, meaning that the whole “EV” mess is back to over-complicate the game.

Anybody who wants to get the best out of their Pokémon in HeartGold/SoulSilver will need spreadsheets and encyclopedias, not to mention more spare time than an emotionally healthy person has. It’s a shame that things couldn’t be as simple as they were in Generation I and II, when hidden stats were much easier to manage, but sadly, those days are never coming back.

That one issue aside, SoulSilver and HeartGold are still fantastic remakes for the casual player willing to ignore all that EV nonsense, and the hardcore obsessive who will spend weeks and months breeding the ultimate creatures. As well as updating the monsters for the DS generation, HeartGold and SoulSilver are home to a number of other changes that are impressively unobtrusive, yet add a lot of extra value.

First of all, HeartGold and SoulSilver now allow you to let your lead Pokémon out of its Pokéball to follow you around on your adventures, like how Pikachu would behave in Pokémon Yellow. While such an aesthetic change seems minor, it’s surprisingly endearing to have one’s favorite Ekans at your heel and talk to it to see how much he likes you. It’s a small touch, yet somehow makes the game feel that much more adorable.

Access to new Pokémon, including the starter Pokémon from Red and Blue, has been included, helping to make some long-forgotten monsters more widespread. SoulSilver and HeartGold can also connect to Diamond, Pearl and Platinum, as well as the Game Boy Advance games (if you have a DS or DS Lite). Essentially, HeartGold and SoulSilver give you access to nearly all the Pokémon you can think of, making this perhaps the most complete pair of games in the series.

HeartGold and SoulSilver also boast Wi-Fi connectivity. You can battle friends locally or go online (with the required friend codes), and you can also access a brand-new area, the Wi-Fi Plaza. At the Plaza, players around the world can anonymously — and safely — interact with each other, having quasi-scripted conversations, playing a variety of touch-screen minigames, and powering up a “Tap Toy,” which is essentially an instrument that is played in the Plaza by tapping the touch screen. Again, this is totally ancillary and could be easily overlooked, if not entirely undiscovered. However, it’s yet another cute little touch that adds that extra layer of charm.

Of course, the biggest change to the game comes in the form of enhanced graphics and sound, brought up to date with animation and visuals in the same vein as Pearl and Diamond. It looks on par with the DS sequels, which is to say that it retains the same minimalist style of the old-school games while looking more vibrant and slightly more detailed. Not exactly the best looking DS games on the market, but clearly improved from the old Game Boy Color days. As well as improved sound, a few new tracks have been included too, giving your ears a bit more of a treat.

All of this is bolstered by the latest big gimmick, the Pokéwalker. Essentially an interactive pedometer, this will be a familiar toy for anybody who owned the “Pokémon Pikachu” device, which worked in a similar fashion. Able to connect to the SoulSilver/HeartGold cartridge via infrared, the Pokéwalker allows players to transfer a Pokémon from the in-game PC to the pedometer and “go for a stroll” through a number of environments. The player then walks around in the real world, with each step being recorded on the pedometer and converted into “Watts.” These Watts can then be spent on minigames to find items or wild Pokémon. If a new Pokémon is discovered, players can fight them within the Pokéwalker using a very stripped-down combat system that consists of Fight, Evade and Capture. Up to three Pokémon or items can be stored on the Walker and then transferred back to the cartridge to use in-game.

The Pokéwalker is a surprisingly fun little accessory, and while — like everything else — it won’t have a huge impact on the way you play, it’s still worth messing around with, and it provides a cool new way to interact with your favorite monsters. Pokémon can also level up in accordance to how many steps you take in a day, but be warned that EV points won’t be collected, so serious trainers will likely want to avoid using it. It’s also a hassle transferring Pokémon, having to constantly shuffle monsters  around from your party to your box to the Pokéwalker and back again, saving between each step. It’s likely that players will get tired of the gimmick sooner rather than later, but as an extra feature, it’s well worth the money.

Pokémon SoulSilver and HeartGold make a fine addition to the Pokémon franchise and are a must-have for fans of the series. If it’s been a few years since you played the originals, this comes highly recommended. Everything you remember is there, plus some great new features that will enhance the experience. While it is, at its core, the same game that you’ve played many years ago, it still manages to feel new and the updated features bolster the original experience in a manner that never intrudes and only enhances. Put short, this is a lot of fun and something that a huge amount of DS owners should look into.

If you’re a hardcore Pokémon fan and you don’t own this, you may very well be asked to turn in your badge.