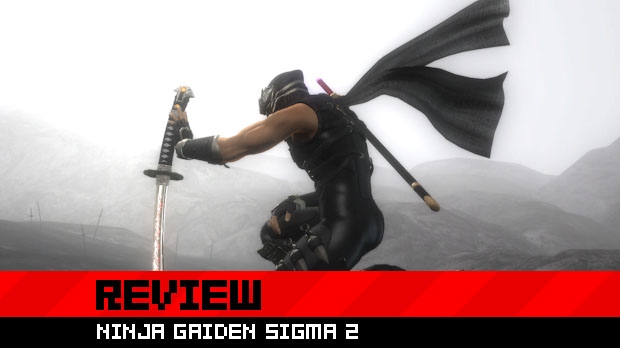 When people think of ridiculously difficult action games, they tend to gravitate instantly toward Ninja Gaiden. Personally, I feel Ninja Gaiden relies instead on being “annoying” rather than “challenging,” but that’s just me. Still, no matter how irritating the game gets, one can’t deny it’s a finely crafted experience, and can be quite empowering in the hands of a skilled player.

Ninja Gaiden 2 has been an Xbox 360 exclusive for well over a year, but as usual, Tecmo has been waiting in the wings to produce Ninja Gaiden Sigma 2, a PS3 version of that annoying-but-somewhat-awesome sequel in which a ninja flips out and starts kicking the crap out of demons for no sensible reason.

Sporting new characters, online co-op and a number of visual tweaks, is Ninja Gaiden Sigma 2 the ultimate version of Ryu Hayabusa’s ridiculous journey around the world, or are Xbox 360 users missing out on nothing spectacular? Read on as we put this game through it’s paces … and jiggle some boobs with our SIXAXIS. 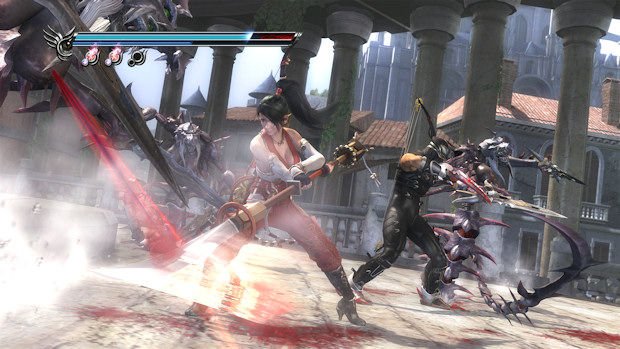 Let’s get the most important thing out of the way first: The boob jiggling in this game is absolutely bloody stupid. Like two jello cups in the wind, they barely even move and the way do move is kind of creepy and unsettling. Tecmo gets points for the creativity of its sexism, but the delivery leaves a lot to be desired. That’s not even considering the fact that one of the women whose breasts you can manipulate is supposed to be fourteen-years-old.

The jiggly boobs is but one of the aesthetic changes made to Ninja Gaiden Sigma 2, the most dramatic of which is the severe toning down of the gore. In the original NG2, players could paint the floors and walls in the claret of their enemies, as rent limbs and decapitated necks would spray beautiful fountains of the stuff in all directions. For a game that was taking itself more seriously than it should have, the buckets of blood served as a dose of much-needed silliness and helped to give the game a sense of gratuitous charm.

I don’t know who Tecmo thinks it’s kidding, but removing the blood does not make for a classier game. In actual fact, it makes the experience feel so much more lacking. You wouldn’t think that the reduction of blood would really have a huge impact on one’s enjoyment, but in a game like Ninja Gaiden 2, where an arm is torn off every few seconds, the lack of blood directly corresponds to a lack of satisfaction. Simply put, this game suffers through the very poor decision to reduce the gore. 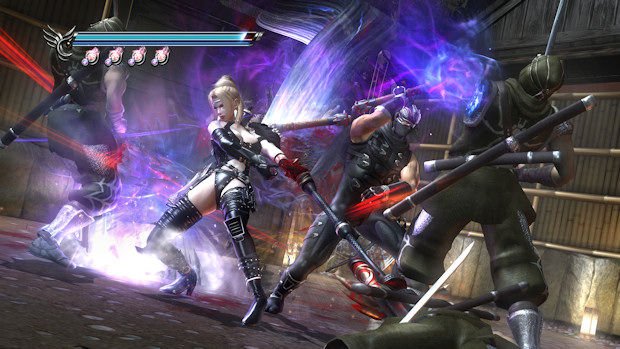 It’s still there, but only as minor splashes and stains on the weaponry. Much of the blood has been replaced by inappropriate purple light that shines from wounds in a very unrewarding manner. It just doesn’t feel as good as it once did to perform an execution on a prone enemy ninja when he’s vomiting purple all over the place. Compared to original version, this PS3 remake has considerably less character.

Less character, but more characters. Ninja Gaiden Sigma 2 adds to the main story of the original game with three brand new chapters featuring a trio of well-endowed, barely-clad female warriors. Interspersed throughout the main story, these new levels are a welcome break from Ryu’s adventure and provide some interestingly fresh moves, weapons and abilities to get to grips with. While the new levels are welcome, they are certainly nothing spectacular, simply thrown into the story with recycled bosses and environments. It’s fun to play as them, but you never get to play with them very much at all.

Also new to NG2 is the “Team Play” mode. This is a series of arena battles designed for online co-op play (or offline with an AI partner). This is actually a very fun addition to the game, although I detected a bit of lag throughout the online battles I fought. When the online isn’t lagging, co-op is great and well worth trying out, especially if you’re better than your partner and can show off your selection of moves and character costumes while he’s just hammering one button with his puny little sword … before he gets himself killed and wastes your time. 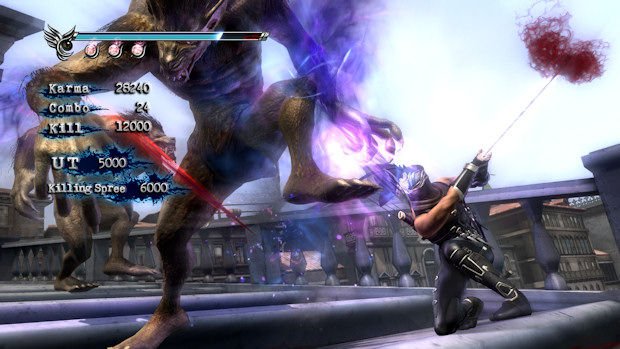 Outside of these changes, Ninja Gaiden Sigma 2 is business as usual. It still looks absolutely stunning, and the combat flows as impressively as always. The same memorable battles are there, and the same annoyances such as endless rocket launchers, tiny little biting fish, and cheap shots are all in abundance. PS3 loyalists who have not played the original version will be satisfied with the magnitude of weapons thrown at Ryu as he progresses, and feel accomplished when they battle toward the final confrontation with the Archfiend. It’s still an incredibly solid game, although I personally have never found this series as much fun as, say, Devil May Cry.

There are a few technical irritations with the game, sadly. Despite a mandatory install, the loading times in NG Sigma 2 are frequent and more lengthy than they should be. It also takes an inordinate amount of time to enter and exit the shop screen. Even pausing the game can be a bit laggy at times. If a game is forcing data on my PS3 hard drive, I expect it to run smoothly and efficiently. The wait between screens simply isn’t acceptable. 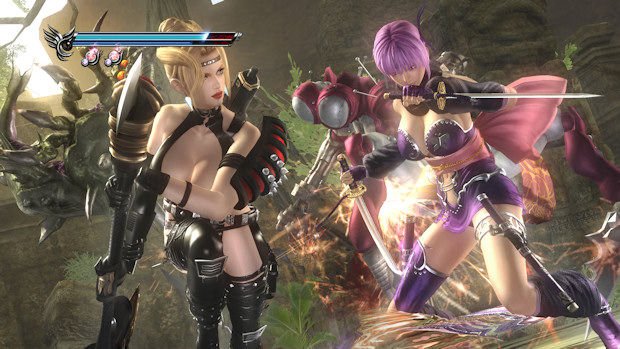 Ninja Gaiden Sigma 2 is worth checking out for PS3 owners who like hardcore action games and have never played the Xbox 360 version. The new additions, however, simply aren’t worth replaying the game for if you have the original version, and the removal of the blood has done the game a significant disservice. If you only have a 360 and were worried that Tecmo was gypping you, don’t worry. You’ve not really missed out on anything important. It’s still a really good game and a worthy addition to the PS3 library, but it’s not quite as rewarding as the original and while the online co-op is a very notable feature, the game’s new toys just aren’t enough to make this a truly must-have title.