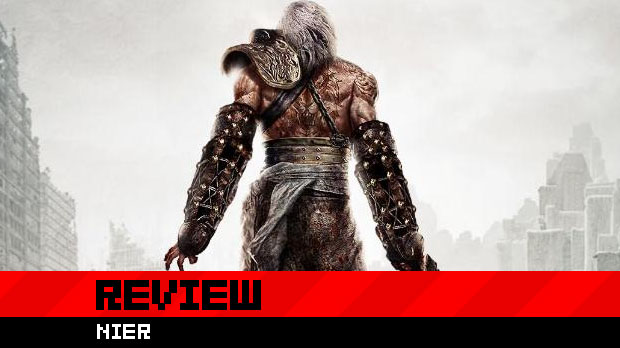 A talking book, a quasi-possessed woman who fights in her underwear and can’t stop swearing, a boy who turns everything he sees into stone and a man with no nipples who fights to save his daughter from a terminal illness. Nier may win an award for the most diverse and eccentric band of heroes ever seen in a videogame. Whether it could ever win anything else, however, is another matter entirely.

Cavia is a developer that excels at stories and characters, but rarely seems to succeed in the gameplay department. The studio is most famous for developing Drakengard, a game with a brilliantly realized world and a wonderful premise, but absolutely nothing else to offer the world. With Nier, yet another world and premise has been artfully and beautifully created. Does it have anything backing it up?

Well… there’s something to be said for baby steps. Read on as we review Nier. 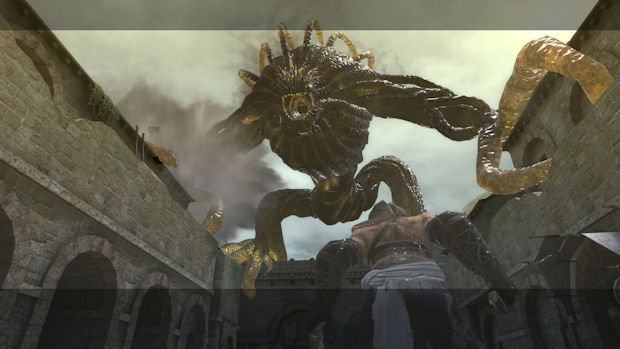 Nier is set 1300 years after the destruction of human civilization. The remnants of the human race survive in scattered villages and cities built on the ruins of their ancestors, but their existence is threatened by an army of ruinous creatures known as Shades and a deadly terminal illness known as the Black Scrawl. One man battles the Shades in the name of his daughter, desperate to find a cure for the Scrawl. He’s soon joined by Grimoir Weiss, an egocentric talking book with magic powers, Kaine, a foul-mouthed woman with a Shade inside her, and Emil, a young man who petrifies whatever he sees.

Nier‘s story is, to put it bluntly, one of the best videogame narratives I’ve had the pleasure to experience. The cast of bizarre, wonderfully depicted, surprisingly deep and poignant characters, not to mention the interspersed moments of genuine humor contrasted with shockingly sad and emotional moments makes this one of the most beautifully written games of the generation. When it goes for laughs, it often succeeds, and when it goes for tears, it very nearly gets them. Most importantly, the relationship between the player-named protagonist and his daughter is surprisingly touching, helped along with loading screens and letters that reveal a little girl absolutely besotted with her father, and dialog that demonstrate the lengths a man can go to in order to help his little girl.

The supporting cast is fantastic, with Weiss stealing the spotlight more often than not. His brilliant voice actor lends sublime arrogance to a character that evolves from a hateful and condescending misanthropist to a loyal and genuine friend. Kaine’s expletive-littered diatribes and violent disposition make for a great humorous offset while some of Emil’s scenes in the latter half of the game are absolutely tragic. All in all, Nier‘s cast is outstanding, and the story takes some astounding twists and turns along the way in order to help craft the best story I’ve seen this year.

Sadly, however, very few will have the patience to get there, because Nier‘s gameplay takes almost the exact opposite route. 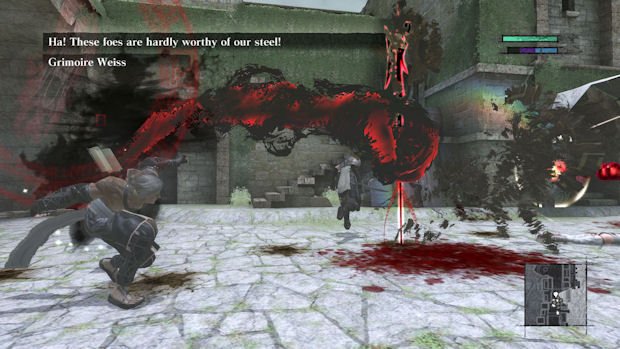 It’s not that the game is terrible, exactly. In fact, it’s quite playable for the most part. Taking an open-world scenario with more than a few nods to Capcom’s Monster Hunter, Cavia’s action-RPG is relatively solid with an inelegant but serviceable combat system and a decent amount of customization. The fighting desperately needs some form of targeting, especially when players get ahold of spears that tend to miss enemies more often than they hit, but the game’s foundations are strong enough to build a game off of. However, Nier is so bogged down by awful missions structure, huge maps filled with empty spaces, and some of the worst sidequests ever created that the whole thing falls apart.

The amount of backtracking in Nier is obscene. Sometimes a mission will involve walking all the way to the library to see one character, walking across town to see another character, then walking all the way back. More often than not, the party has to traverse all the way across a huge and empty world map to get to a city, then go back to the main village, and sometimes then go to another city. There is no “fast travel” option to make things quicker, either. Later on, the ability to ride a boat to various waypoints becomes available, but the boats take players to such bizarrely remote areas that it is thoroughly useless. A wild boar can also be tamed and used as a mount, but it’s actually slower than walking when it’s not made to charge, controls like shit when it does charge, and has a tendency to make the player more vulnerable to instantly dismounting attacks.

Then there are the fetch quests. The endless, endless fetch quests. Before long, wise players will give up on the sidequests altogether as they are nearly all exactly the same. They usually consist of gathering up between ten and thirty items randomly strewn across the world in random places. The lack of imagination and clear last-generation effort that has been put into fleshing out the game is inexcusably abysmal. It smacks of lazy design more than anything else, especially when it bleeds into the compulsory quests as well as the optional ones. 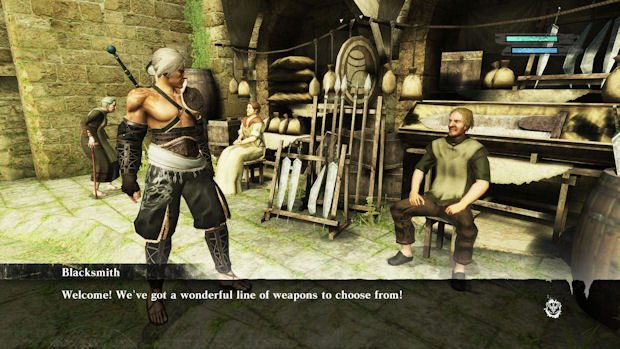 A special mention must be made of the fishing minigame, which also helps the decision to ignore sidequests since many of them rely on catching fish. It absolutely boggles the mind that, over ten years after the release of Ocarina of Time, a studio exists that struggles to make a fishing game work. Even Animal Crossing had a decent crack at it, but Nier, with its useless tutorial, unhelpful camera angles and grotesquely time consuming parody of fishing is disgusting. At best it’s broken, at worst it’s a deliberate attempt to confuse and anger as many people as possible.

The game’s missions are so bland and banale that Nier suffers from a supreme lack of pacing. Rather than ever try and improve the pace, Cavia seems determined to make it worse at every turn. One way in which it does this is to try and force different gameplay styles to make Nier look like a confused and schizophrenic shambles. From 2D platforming to top-down shooting, Nier attempts many different flavors, yet fails to make one that tastes good. Even worse is the section that tries to parody text adventures. The joke falls flat on its face and just becomes incredibly long and tedious. Even worse, Cavia forces the joke twice, making players sit through a huge wave of dull text more than once during the course of the adventure, followed by a test to make sure players were paying attention. As if that arrogant waste of time wasn’t bad enough, the test itself has randomized answers that aren’t actually based on the story’s content, meaning that even if you pick the right answer, the game will randomly say you were wrong and force you to skip through screens and screens of text again.

Nier, for everything it does right, attempts to be clever far too many times, and far overshoots its goals. It also seems incapable of keeping anything simple, forcing every task to take longer than it should. For example, players can level up their weapons, but to do so, they must gather all sorts of rare items with no clue given as where they’re obtained and no guarantee the items will ever show up, and take those items to a shop that isn’t in the main town, but is instead miles away in a remote part of the world that requires players to climb up a load of lengthy ladders. Climbing, of course, is really slow, in case you thought that might not be so bad. 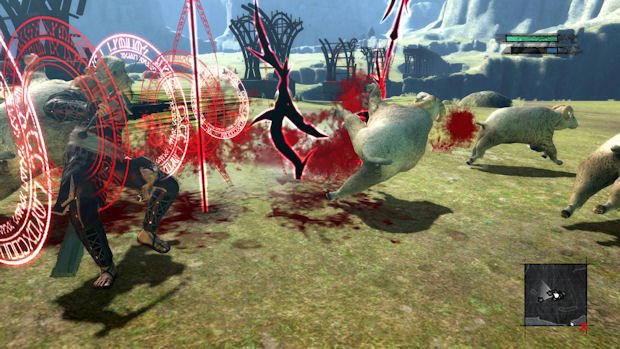 The graphics are pretty dire, which is a shame because is the artistic style is original and classy. The costumes, monsters and even some of the NPCs look very unique and work together to craft a strange yet endearing world. The muddy colors and visuals that barely look better than a PS2 game don’t do it justice, however. Fortunately, the sound department holds up its end, with a soundtrack that feels fresh and memorable, and voice acting that really isn’t that bad.

The most brutally upsetting thing about Nier is how much I desperately tried to love it. The game earns so much merit for the enchanting story and the endless potential, but it willingly and insultingly spends all of its credit on terrible pacing, unforgivably inconvenient gameplay and the fact that it repeats all its dungeons at least twice. Every time I started falling in love with Nier, it swiftly and violently battered that love out of me, seeming to do its utmost to be as unlikable and exhausting as possible. Nier is not a love/hate thing. It’s a forgive/hate thing, and it does too much that is simply unforgivable.

It’s infuriating enough that something so brilliant is also so flawed, but to think that the flaws were deliberately and knowingly designed to be what they were by people who surely know better makes it even more despicable.

Yet… as much as I cannot forgive Nier, I cannot completely hate it either. A game that pulls the heartstrings and lightens the mood as much as this did deserves some form of credit. Rarely has a game straddled the line between brilliant and dismal as much as Nier has, and rarely has it made for such a difficult review. I want to tell you to throw Nier away, cast it to the bargain bin and never spend one thin dime on it, but I don’t want you to miss out on one of the most gorgeous and clever stories ever woven by a game. At the very least, it deserves to be rented, and blasted through with the sidequests and timewasting ignored as much as possible. Although the frustrating repetition and poor pacing is unavoidable, there is something truly magical buried under the immense amount of dried feces.

Whether it’s worth digging through all that shit, however, is up to you.