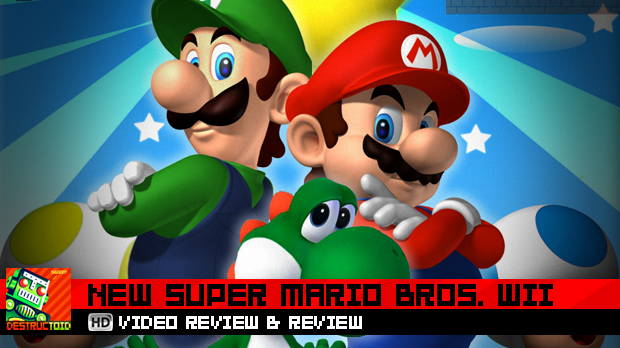 It’s a-me! Mario! Nick said he’s too lazy to write an intro! But he reviewed New Super Mario Bros. Wii and you can read that after the jump! There’s also a neat-o video review, too! Woo hoo!

The game brings Mario and gang back to the side-scrolling roots of the series, across eight all new worlds, this time either alone or with up to three friends. But while that’s the game’s new “gimmick,” per se — Nintendo has tried to position this as an innovation — the core of the series remains intact. While some changes have been made to how you play the game (mostly in the use of the Wii Remote’s motion controls), anyone who has played a side-scrolling Mario title will feel immediately at home.

New Super Mario Bros. Wii offers up two control schemes — Wii Remote and Nunchuk, or the Wii Remote alone in the sideways fashion of a traditional controller. While the former option works as well as you’d expect, there’s little reason to pull out your Nunchuk and plug it in — holding the Wii Remote sideways is definitely the preferable method of play here, as it mimics the feel of an NES control. (Since I played this way almost exclusively, controls I describe later refer to this scheme; they’re slightly different for the Remote/Nunchuk combo.) For the most part, muscle memory is going to kick into gear immediately for veterans — the d-pad moves, and the “1” and “2” buttons will “dash” and “jump” respectively. It’s a simple control scheme, designed for a game in 1985, which works and feels surprisingly fresh and fun even today. 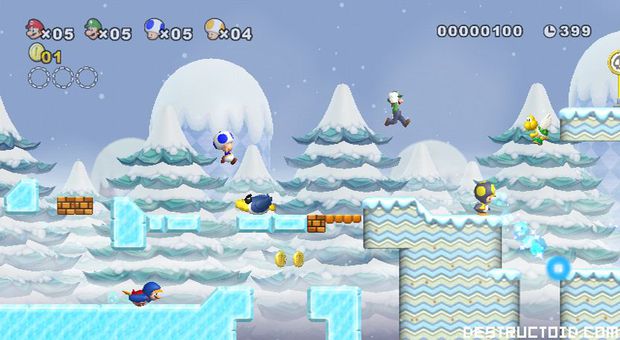 But it wouldn’t be a Wii title without some motion control, and New Super Mario Bros. introduces some light tilting and waggling to spice things up. This shake and waggle doesn’t really get in the way of playing, with one exception — having to press a button and shake the remote to pick up objects and enemies. I found it to feel awkward and bit a unwieldy, especially in “high pressure” situations where I had to navigate platforms and pick up objects at the same time.

It’s a small complaint, and fortunately not one that takes away from the game. In fact, most of the motion control additions feel natural and add to the fun. Shaking the Wii Remote will cause Mario to do a spin jump into the air, or spin on his way down from a jump. In some areas, the Wii Remote has to be tilted in order to manipulate an environmental object, like a lift. One of the game’s new suit power-ups, the Propeller Suit, is used by shaking the Wii Remote which will cause you rocket jump straight up in the air, allowing you to access new areas, coins, and power-ups.

Speaking of power-ups and suits, New Super Mario Bros. brings the usual suspects along for the ride (mushrooms, fire flowers, etc.), but also add a few new ones to the mix. And yes, they’re as awesome and useful in gameplay as you’d expect. In addition to the aforementioned Propeller Suit, Ice Flowers and Penguin Suits are also spread about the game. 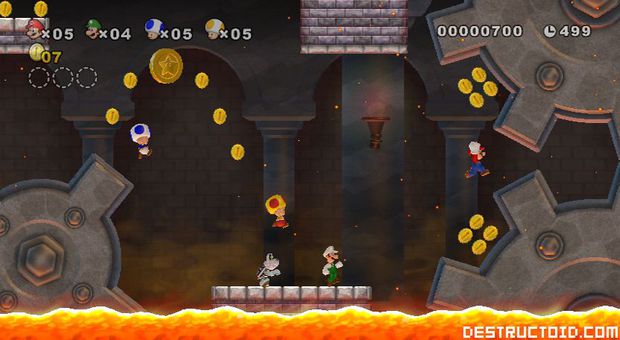 The Ice Flower acts exactly like a Fire Flower, and does exactly what you’d expect — the ice balls will freeze enemies in blocks of ice. The blocks of ice can be used as weapons (by picking them up and tossing them), or can be used to reach new areas. The Penguin Suit will allow you to move faster and more freely in water, and stabilize you on ice, as well as throw ice fireballs. The suit’s belly slide is also particularly neat — you can run, hop, and then slide across a level to take out enemies or even gain enough momentum to hit a ramp and access tough-to-reach areas. All of the game’s new power up are welcome additions to the arsenal already found in Mario games, and are as endearing (if not even more useful) than some of the suits found in previous games.

The game features eight worlds to complete, which are laid out in a similar fashion to that found in Super Mario World or Super Mario Bros. 3. Some stages have alternate flag poles which can lead to different paths, unlocking even more challenges and collectibles. As reported, the game is a bit more difficult than Mario’s last side-scrolling adventure, New Super Mario Bros. DS.

But it’s certainly not brutal — experience Mario players will have to contend with plenty of tricky spots (which pop up around World 6), but won’t ever find themselves in need of the much-talked-about “Super Guide.” Only novice players will have to rely on these in-game “walkthroughs,” which is a nice feature to help them get through the hard and get to the fun… and there’s plenty of that to be had in New Super Mario Bros. Wii, for sure. 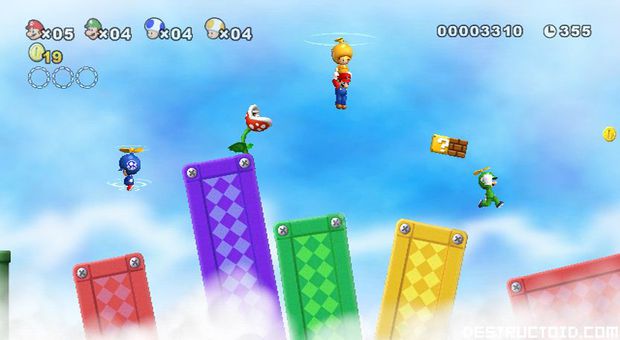 While the entire game can be played as solo Mario, this is the first Mario game that will allow you to play cooperatively with up to four players. Whether or not this is a blast or completely frustrating is mostly up to the player and his or her partners. In some cases, four players on the screen makes the game slightly more difficult. The camera will pan back, and it’s easy to lose yourself, or accidentally bump a player on the head and knock him or her into a bottomless pit or an enemy. Of course, this can be done intentionally (which can lend to a lot of laughs), but more often than not it’s simply a product of too many cooks in the kitchen at once.

The good news is it’s actually more difficult to die when playing with multiple players; as long as one player remains, those who failed will return in a bubble that, once popped, will get them right back into the game. Because of this, dying won’t necessarily send you back to the beginning of the stage or to the last checkpoint… it may actually be easier to get through a level because of this.

All in all, it’s actually a lot of fun to play with three friends, and it truly does feel like a completely new experience as opposed to simply running through the levels alone. Despite some frustrations and arguments that may break out because of accidental kills or “power-up stealing,” most of the shouting between players should be lighthearted and fun. 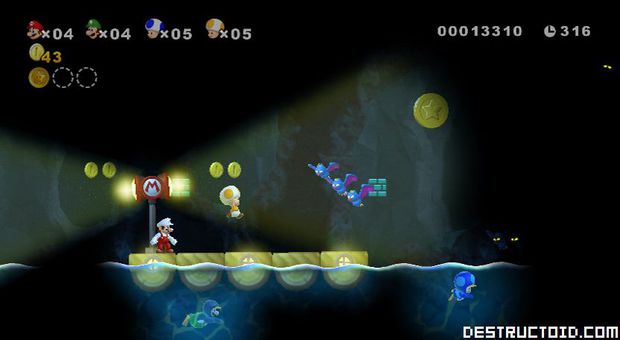 It’s likely you’ll laugh more and smile more when playing with friends — even if they accidentally (so they say!) stomped your head and knocked you into a Goomba. It’s not for everyone, though — some players will prefer to stick to the solo game. My wife, for instance, actually disliked playing cooperatively — she found it difficult to focus, preferring rather to go it solo. To each her own, but it should be said that the overwhelming response to cooperative play in New Super Mario Bros. Wii is positive.

Players not interested in this hippie, hand-holding cooperative crap have their own modes, including the competitive “Coin Battle” mode. A take on the classic Mario Bros. game, this mode has players making a mad dash through levels to collect as many coins as possible. Totals are tallied at the end of the stage, and the player with the most coins win. Unsurprisingly, “Coin Battles” are hectic and fun, a nice addition to the game’s “story” experience, and absolutely perfect for party situations.

Outside of the cooperative play, the new worlds, and new power-ups, the game really doesn’t offer anything truly unique to the series. Nintendo made some creative choices, but basically played it safe, and who can blame them? When you have honed such a successful and solid formula, there’s little reason to deviate too far from it. And New Super Mario Bros. Wii doesn’t… but that doesn’t mean it’s not a must-have for Mario fans and Wii owners. It also easily ranks among the best in the series, certainly offering more challenge and content than New Super Mario Bros. DS.

Despite being feeling and looking somewhat familiar (which is definitely a positive in this case), New Super Mario Bros. Wii is one of your safest and best bet on the Wii this year.