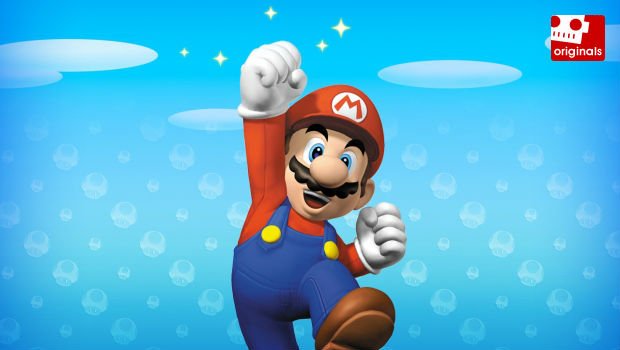 There’s a lot of hubbub around the two New Super Mario Bros. games coming out this year. Tony wrote an awesome piece on why he thinks their copy-and-paste design is a failure. Reggie has come out saying that the fans can’t be pleased even though the Wii U is launching with a Mario game. People love their Mario games, but these NSMB titles seem to have them a bit down. There’s a lot of angst over these suckers even though most of us readily admit that they’re probably going to be fun to play and well received on the whole.

Here’s the problem: no one is right about the NSMB series. Well, to be more precise, the fans are treating them incorrectly and Reggie is being deceptive about them. You see, we’re coming at these games from the totally wrong angle. The fans are treating NSMB as main series Mario games, which is exactly what Nintendo wants us to believe.

The trick is they aren’t. 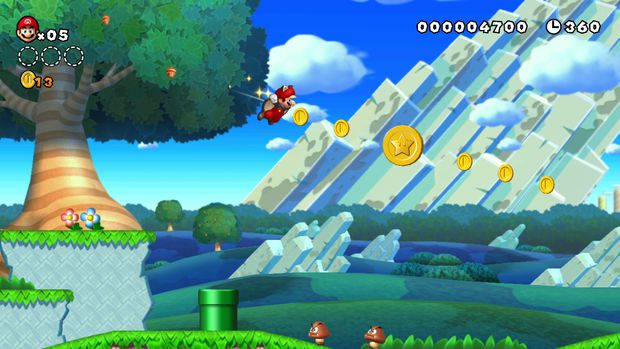 When NSMB first launched on the DS, it was easy to assume that it was a main series Mario game. After all, sidescrolling, platforming Mario is what the series was born with, so Mario returning to his roots shouldn’t be considered a spin-off game, it should be considered as a new installment of the series. Even when NSMB jumped to the Wii with NSMB Wii, one could argue that the series should still have been considered within the main run of Mario games despite how closely the two were released. A traditional Mario title on a home console is pretty much the definition of what a non-spin-off Mario is.

But then you start to think about it. What other Mario games have iterations on both handhelds and consoles? Not the main series, unless you count ports of older games, which we won’t. It’s the Mario spin-offs that get this treatment. The likes of Mario Kart or Mario Party or Mario’s sports games all double up on their console publication. Main-line Mario games hit one console that they’re usually designed specifically for. Once you consider this, it becomes pretty obvious that Nintendo isn’t treating NSMB as a hardcore Mario game, but as a spin-off that they can publish regularly while they work on the “actual” Mario games in the background. 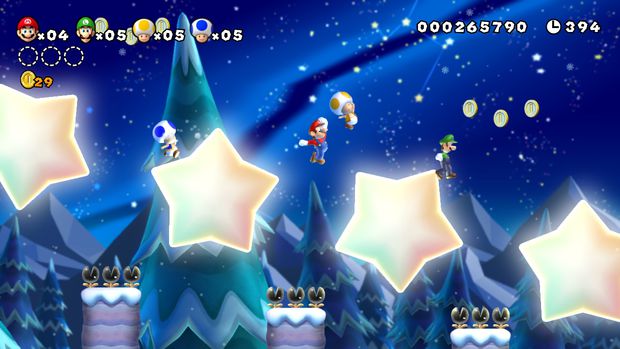 The evidence piles up once you look at the sequels coming out this year. First, there are two of them. Two true Mario games in one year? Doesn’t happen. However, you can easily point to a plethora of sequels and multi-platform releases when you look at the spin-offs. This also explains (excuses?) the cut-and-paste style of the games.

Nailing down the gameplay to near perfection and then pumping out sequels with slight alterations remind you of anything else you’ve played with Mario in it? It’s not a tent-pole Mario game, I can tell you that. One of the reasons tent-pole Mario games are so popular is because of the fact that they are so different. Hell, the very fact that we talk about NSMB as a series in and of itself defines it as separate from Mario’s main exploits.

Nintendo might point to New Super Mario Bros. 2 (that’s the one on the 3DS) to argue against this logic. After all, it is all about the coins (a decidedly old-school spin where things like high scores still matter). The problem is, as we’ve already shown, the design isn’t changing much with this iteration as the locales, graphics, and basic gameplay seem to be the same.

The emphasis on coin collection is a new spin on the same formula. This would be akin to Mario Kart: Double Dash where an entirely new focus was put on the game, but the basics were still the same. These are major changes in a series, obviously, but they still function under the same rules and designs. Other easier-to-identify signals in NSMB are updated powers which are exactly the same thing as new weapons in Mario Kart or new spaces in Mario Party. It’s pretty easy to see that Nintendo considers NSMB a base for a Mario spin-off series not a standalone, core title. 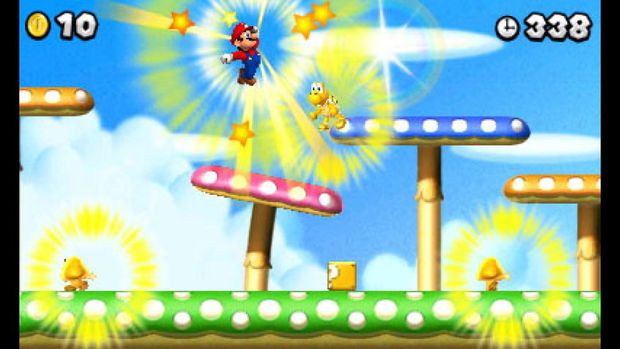 What is the issue with NSMB being a spin-off instead of a core title? Very little if you’re excited for more quality platforming Mario antics and don’t treat the games as something more than spin-offs. After all, we’ve been accepting cut-and-paste antics from Nintendo’s spin-off games for years and enjoying it, for the most part. The issue really arises when Nintendo expects us to be just as happy with a spin-off as we would be with a totally new core Mario game. These aren’t the same things, and when Reggie doesn’t understand why people aren’t over the moon about NSMB launching with the Wii U as a true Mario game it shows either an awful lot of disconnect or a clear cover-up of the fact that Nintendo knows these are spin-off games. Don’t misunderstand, I’m not saying that this is some sort of conspiracy and Nintendo is evil, but they should really just call a spade a spade.

Of course, as fans, we can do better as well. The reason that there are so many spin-offs that sell incredibly well is that most of them are good. Yes, it’s easy to be disappointed when you start thinking of NSMB games as spin-offs that will be produced in the same manner as other spin-offs, but in reality, what we’re going to most likely get is a lot of really good, old-school, 2D platforming games up to the usual quality of all of Mario’s exploits.

I find it tough to complain about an influx of good games in a genre that’s horribly underrepresented even if they are spin-offs. Now, if you believe that the Mario spin-off games need to do more to innovate as well, then adjusting your perception of NSMB isn’t going to do much. You may in fact be even more upset with the series. That’s a personal call.

However, if you put your expectations at Mario spin-off level instead of core Mario, all that’s needed to ditch the complaints and be entirely happy with the NSMB series is a simple shift in perspective. These aren’t the games that will once again redefine what we should expect from platformers, they’re just the quality filler that holds us over. If Nintendo admits to this and the fans accept it, we’ll be as happy before we play the NSMB games as we are once we actually get our hands on them.