Your father is dead, pretty much everyone wants your territory, and your only allies are in the mysterious lands across the seas. You’re forced to kill your cousins at your father’s remembrance for their impudence, and forgiving their uncle for his ignorance will damn you in the eyes of your people. Expeditions: Viking developer Logic Artists wastes no time in emphasizing that your normal fantasy-style RPG morality need not apply here. Certainly, there is a peaceful route to be had, but the time period – and Vikings as a whole – are not known in popular culture for their peaceful and loving ways, and one may need to be cruel to be kind.

Unfortunately, a vast array of (hopefully soon resolved) pre-release bugs and an endless stream of patches has prevented me from finishing my journey of conquest (or “trade”) before its release, but there’s still plenty to talk about this sequel (and precursor) to Expeditions: Conquistador. 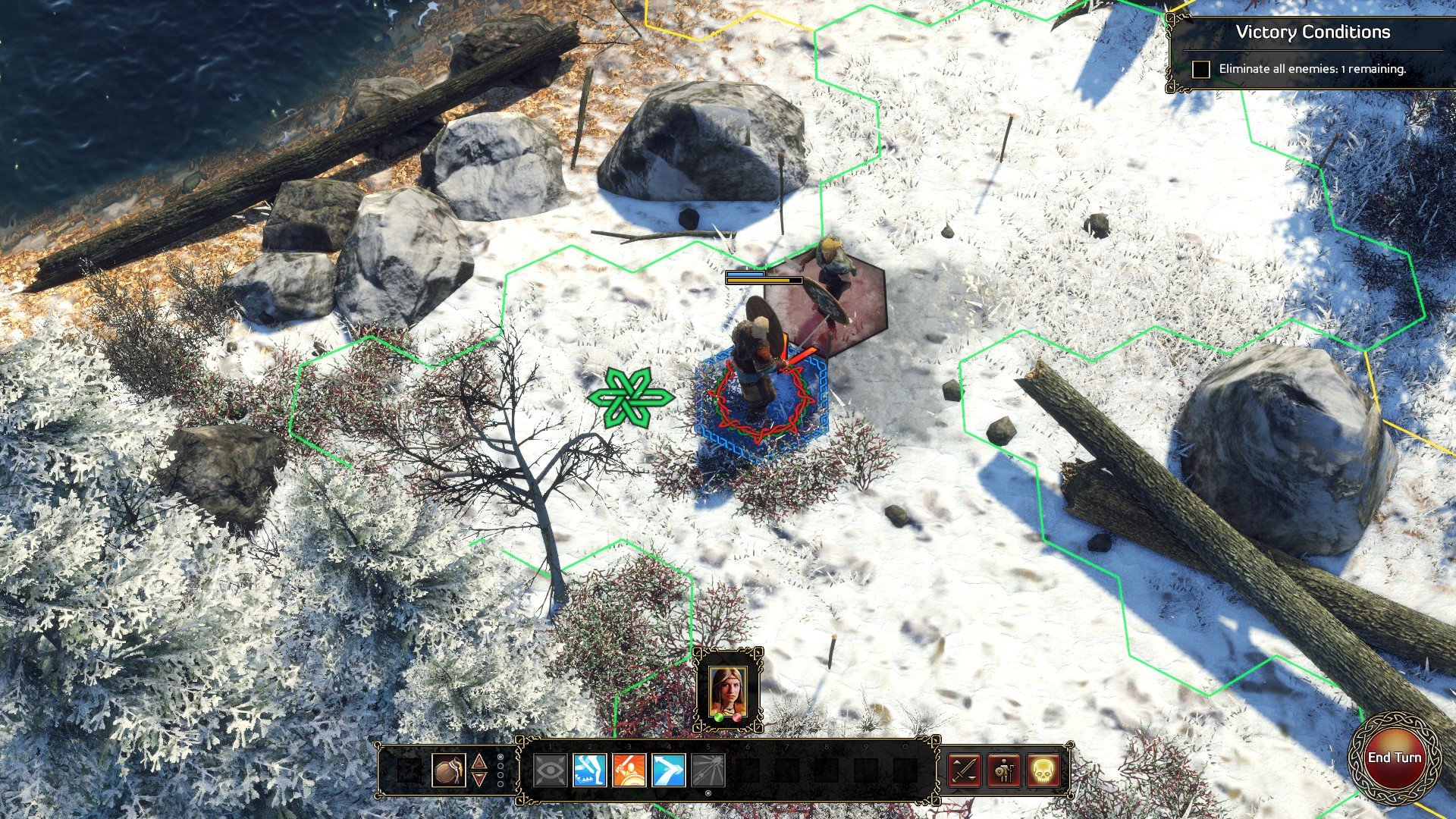 Your titular character is whatever you make of it, and it’s easy to be overwhelmed once you hit the character creation screen. I am reminded strongly of Wasteland 2, where a limited number of choices, aesthetically, leads to a complicated statistics/skills chart. Here, it’s taken a step further, with upwards of a hundred active and passive skills. At a loss, I picked the “Leader” preset, making my character incredibly strong, endlessly charismatic, fairly perceptive, kind of squishy, and a goddamn butterfingers. Seriously, I couldn’t get a critical hit if the enemy threw themselves onto my sword (my chosen weapon, alongside a sturdy shield and a variety of support buffs). Are the presets perfect? No, but they give you a pretty solid idea of what skills and statistics complement each other.

Viking appears to be broken into two campaigns; your initial setting in Denmark, and across the seas in Britannia, each with a strict time limit. The former can be thought of as a surprisingly lengthy tutorial; building your longship, filling out your crew, and righting wrongs… or causing additional wrongs, probably because they’re in the way of something shiny. You’ll need a lot of those shiny things (represented by the “valuables” commodity) to make up for any situation where stabbing doesn’t work.

Despite what I just said, a surprising amount of the game can be resolved directly through being a general dick to everyone you meet, then stabbing them. It even seems to be fairly profitable – churches in particular are quite vulnerable to the ol’ “stab and grab,” but when your goal is to make allies as much as earn wealth (It does seem that outright conquering may be an option), there are times you have to play along. There are also times the game outright makes you play along, just to make sure you don’t muck it up. 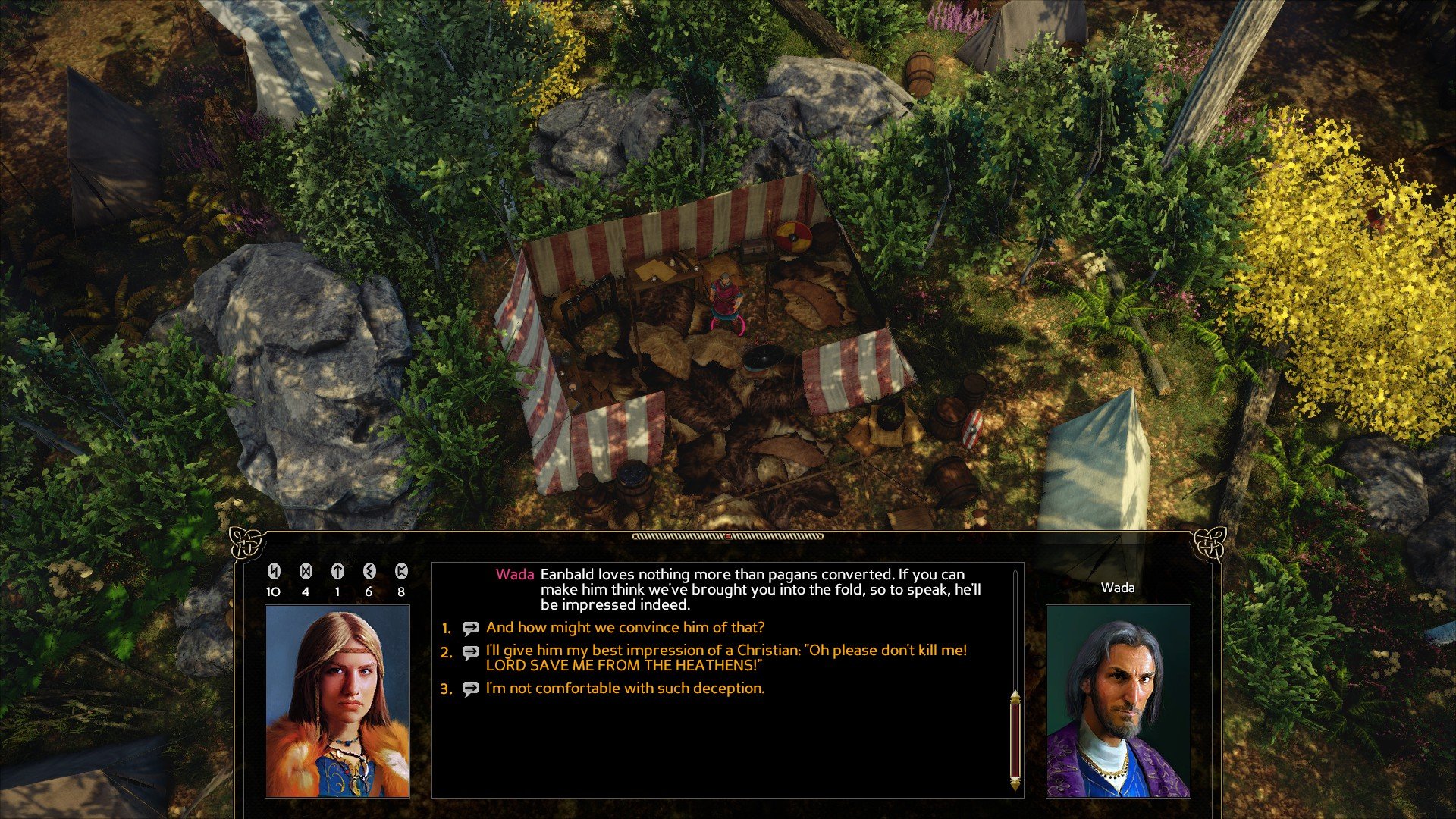 If you do choose to play along, there are a lot of quests as you progress. So far, I have never felt overwhelmed by sidequests, but while the lords acknowledge me as a powerful foreign dignitary, everyone else says, “Oh, a Viking. Can you go stab this guy for me? I’ll give you this item.” It seems even in a historical RPG, I’m solving everyone’s problems for them, with some being legitimately involving, and some being tedious busywork, but in all cases, smartly and often wittily-written. The main quest-lines I’ve explored have been thematically interesting, but involve a great deal of going from Point A, to Point B, and repeating this extensively. While they remain enjoyable, the constant backtracking really slows things down.

Overworld movement drops the hex tiles of Conquistador entirely, and navigation is fairly simple, although the camera does like to reorient itself anytime a screen load happens. Like any good Western RPG, the key feature is less about finding quests and more about finding items that don’t belong to you – I feel like an inordinate amount of my time has been spent breaking open barrels and crates for the various crafting and trade resources. These lootables are scattered across gorgeously-created landscapes and villages, and when you’re done smashing everything for tar and rope and iron, it’s all just lovely to look at. 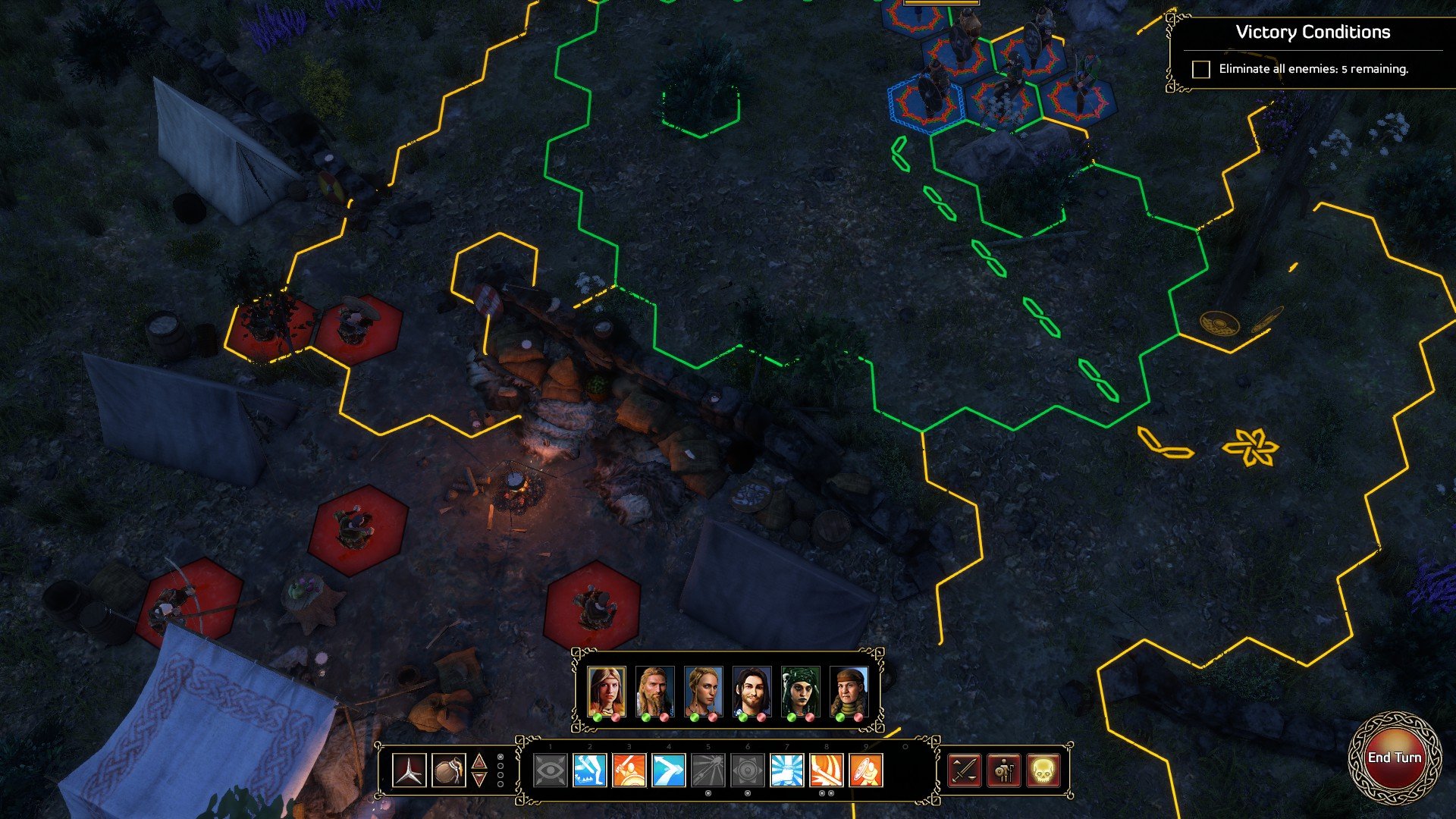 Once in combat, those tiles come right back, and you’re popped into a fairly traditional turn-based strategy system. Your melee attacks will always hit, while ranged attacks, which are even more powerful, are tempered by a more traditional percentage-based system. I personally found all of the weapons to be useful, but the structure seems to be based around a rock/paper/scissors counter system: You need axes to beat shields, shields to beat bows (and slings), and bows to beat everything else. Thrown into the mix are blessings of the Norse gods, witchcraft poisons, tripwires and caltrops, and Christian guilt (really) to mix things up. Skills are earned so quickly, it’s a while before you very suddenly realize your enemies have advanced to a point where you desperately require every one of those skills to survive. Unlike Conquistador, failure does not appear to be an option.

When it works, the combat is satisfying and possesses a great deal of impact, heads and arms flying with each critical. I’m still running into a lot of problems that sully this experience. When you run into combat from the overworld (say, ambushed in town), the enemy will go first. There are no formations, so your leader is in front. By the end of the first round, your leader will be dead. During a particular boss fight, this lack of ability to pick formations meant my leader or chief damage dealer were taken out immediately. 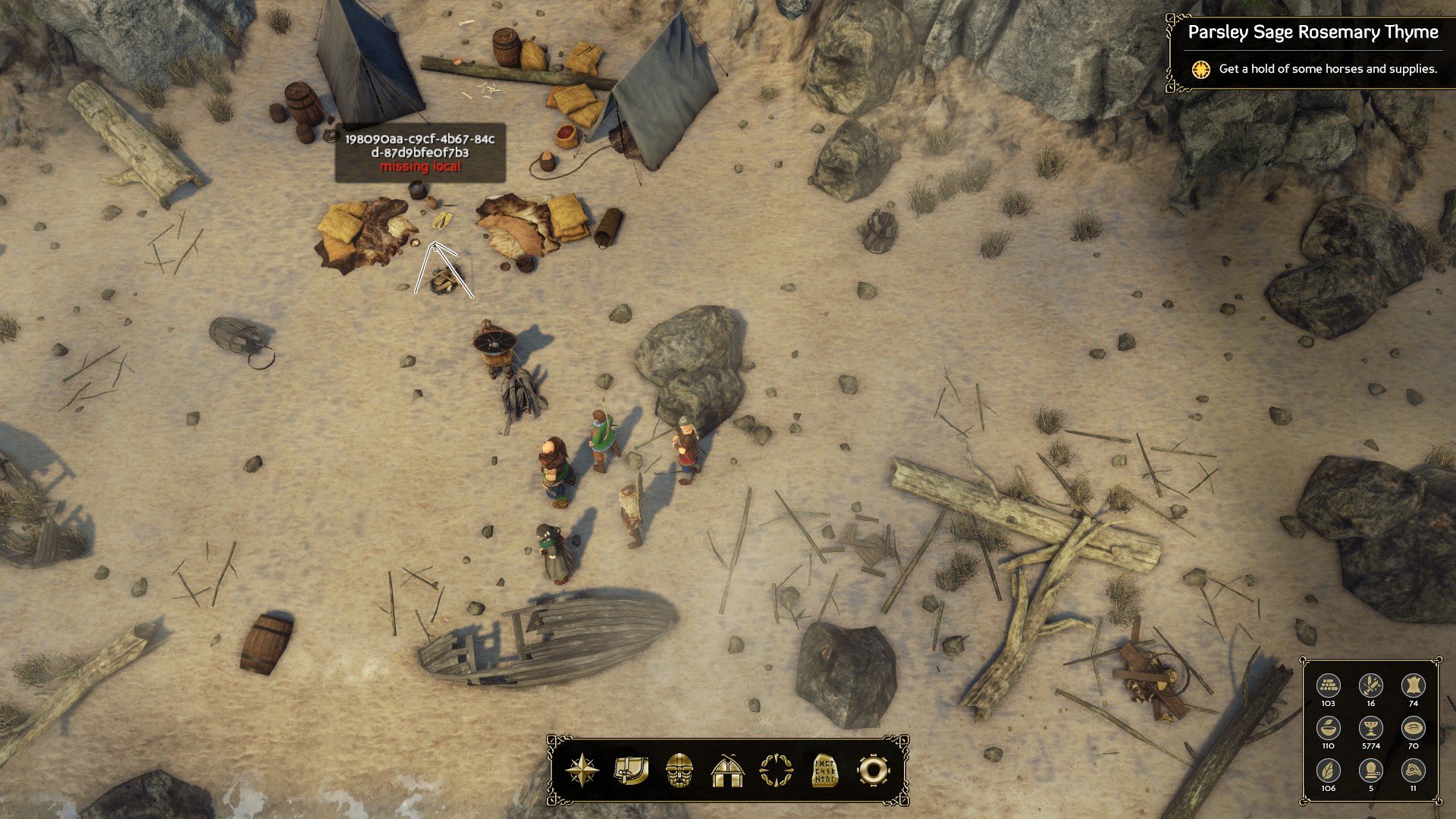 There are also currently a great number of crashes and bugs. I cannot possibly list for you every one of them I have run into; at a certain point, I’ve started to feel less like a reviewer and more like a QA tester. Characters will be missing from scenes, descriptions routinely missing from the UI and the game. A particular fight took me two hours because they kept using fire arrows, and extensive fire particles seem to crash the game (ruining my favorite item, the fire pot). Other fights had me win, simply because the AI forgot to spawn.

The game has an extensive morale system, where your choices affect the moods of your hird (your party), based on their ethical standings. Your character is a self-insert, and should always have great morale – they’re the Thegn, the leader of your people!

My morale is -8. The normal cap is -5. I drop to enemy mental attacks like a sack of potatoes. Anglo-Saxon potatoes! 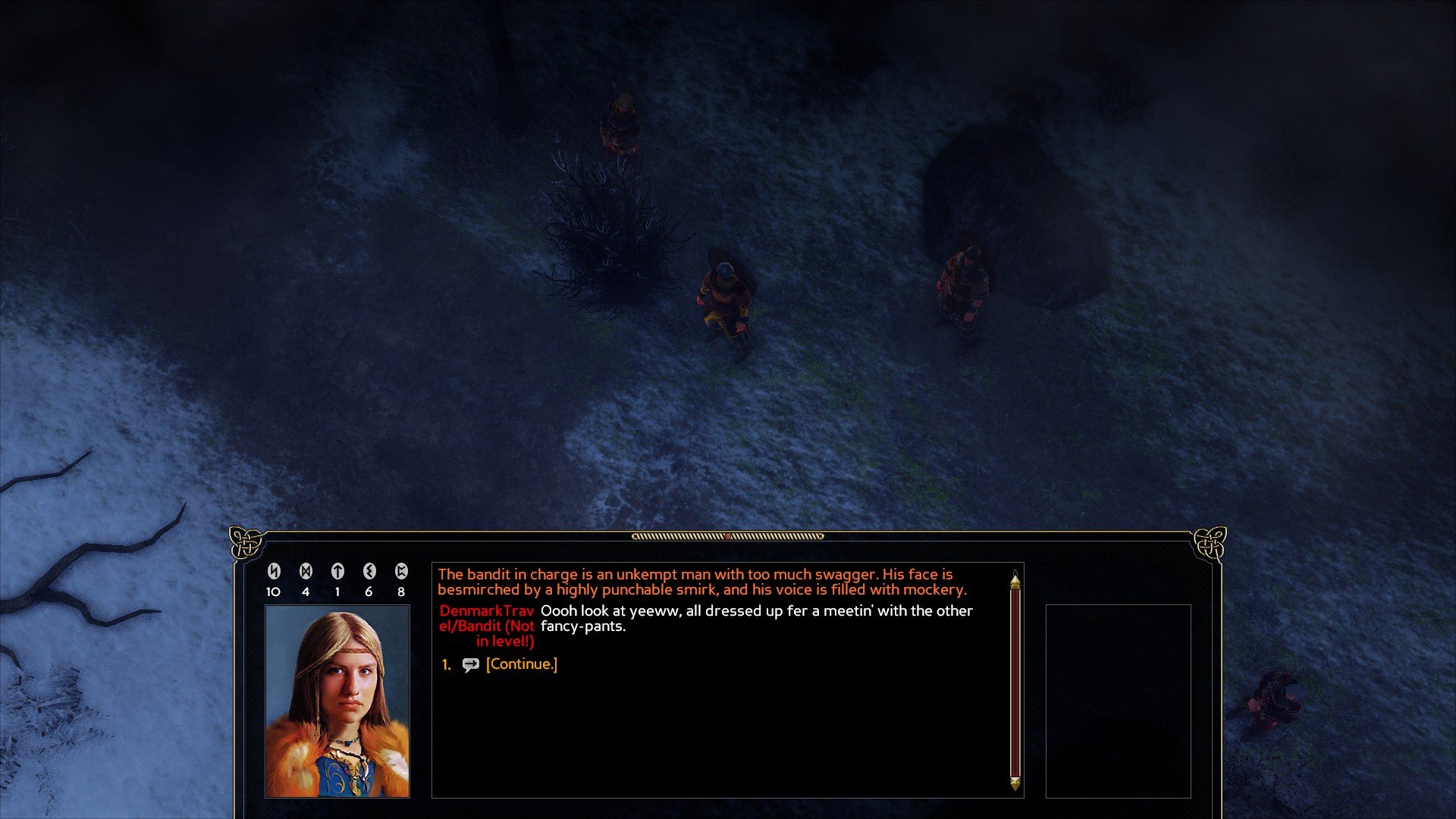 Logic Artists seems genuinely interested in fixing these bugs, even if many of them continue to be present for launch today. Ideally, the game will continue to be patched as I make my way towards the end. While I’ve enjoyed my time with Expeditions: Viking so far, despite its problems, there is still much to see, many to meet, and at least one more church to loot.

Filed under... #reviews in progress#SRPG#Vikings