What are you waiting for? Do you want to hurt Mike Haggar’s feelings? Read!

For games like Final Fight and Magic Sword, telling people what the games are about seems somewhat pointless. They’ve been around for twenty years and it’s easy to assume that people have played them by now. Not to mention Final Fight‘s iconic status as one of the best arcade brawlers ever made. You should know these games and I won’t waste your time on a lengthy description of them.

That said, it should be noted that these feel like absolutely perfect ports of the arcade version. Everything moves as it should and the controls are perfectly responsive. There are no quality concerns I have over the gameplay whatsoever. 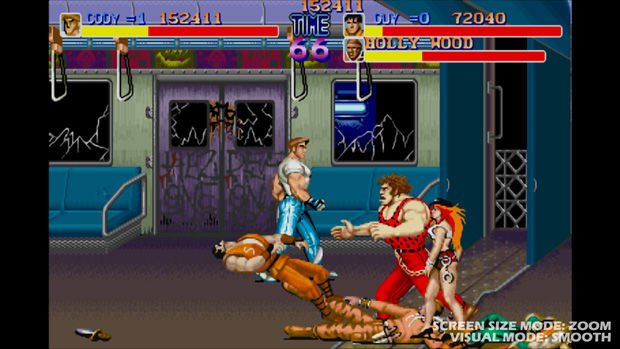 So let’s talk about what’s new in this release, instead. There are three difficulty settings, an intriguing online multiplayer system, remixed music and graphics, leaderboards, a collection of unlockable bonus art and achievement-style challenges. It’s an impressive package overall, and Capcom didn’t skimp on it.

Final Fight: Double Impact features four different visual styles that you can switch between at any time from the options menu. Two of the modes, “crisp” and “smooth,” are intended to give a glossier, more “hi-def” feel to the visuals. Like many attempts of this nature, these effects just wind up looking like someone took a watercolor brush and painted over everything, muddling details.

In addition to the four styles, there are multiple video modes that allow you to configure the game to best suit your display. Normally, this wouldn’t be such an amazing feat but one of these, Cabinet Mode, places the game’s video into a faux arcade cabinet. The “monitor” in the middle shows the game with the scanlines a CRT display would produce and is bordered by the original art and instructions from the machine. It’s pretty damn neat, even if a novelty. 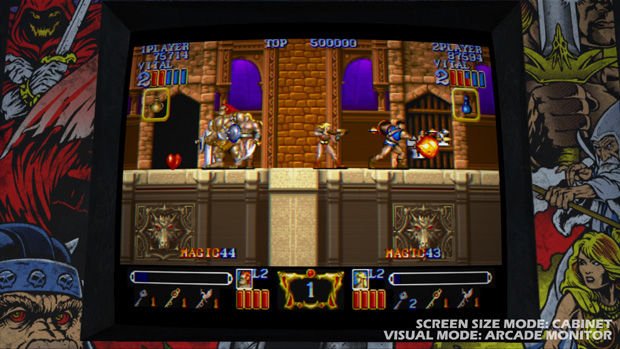 One of the aspects of the arcade experience that we don’t get to experience in our homes is interaction with other people. Not in the same way, at any rate, as there’s very little risk that a random stranger is going to roll up next to you and start playing along. Capcom has chosen to reflect that experience in Final Fight: Double Impact in an interesting manner.

As a default, the game allows for drop-in/drop-out multiplayer wherein anybody else who wants to start playing can hop into your game session while it’s in progress and take on the second player position. You can change this setting so that only your friends can join or disable online play altogether if you want a little more privacy than that, but the implementation is really quite brilliant. Someone can hop into your game without your awareness, press start and they’re right in the game with you.

This can be a good and bad thing, depending on who you wind up with. Playing with pre-release code on the PS3, I had relatively little experience playing with others at all, though I did manage to get a few games in using the mode. It was satisfying, but it may be less so on Xbox Live, where the availability of voice chat is much greater and the likelihood of an unwanted and annoying guest higher as a result.

Double Impact also features challenges, individual goals which correspond neatly to Trophies/Achievements. Completing them unlocks bonus art assets, including a Street Fighter comic, fan art and more. Within the framework of the game, these challenges are organized into tiers and some must be cleared within a tier before new challenges become unlocked on higher ones. It’s a forced replay mechanic, but not a bad one particularly, as these titles are the sort which can easily be returned to and played through in a brief time.

No, the problem with the challenges is less in being made to play the game repeatedly to even attempt them. It’s the manner in which the game opts to inform you of them. A message will pop up on the screen every time you are in a position to attempt one. If you fail one, you get the same message a second time. I found them distracting, particularly on a two-player local game where there would be two messages running simultaneously. It’s annoying and should have either been made more subtle or an option should have been provided to turn off the notifications.

That said, Final Fight: Double Impact is an excellent package combining two great arcade classics. The niggling annoyances don’t add up to any real detriment to the title and the bonuses are pleasant. It’s a quality release and one worth grabbing if you’ve enjoyed either Final Fight or Magic Sword.