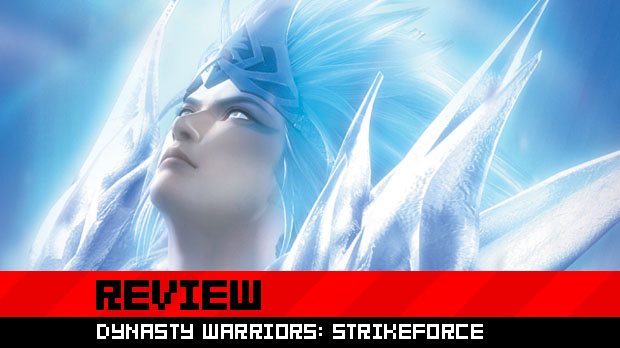 When Dynasty Warriors: Strikeforce was released for the PSP, the biggest complaint I had was the lack of online multiplayer. The game was one of the deepest, most accomplished Warriors game made yet, but it was designed entirely around multiplayer. Not a bad idea, until you remember how hard it is to find somebody with both a PSP and a love for Dynasty Warriors.

Strikeforce has now come to home consoles, not only bringing AI-controlled allies to help against the game’s many brutal stages, but bringing the one thing it truly needed — online multiplayer. So, how do the game’s online features stack up, and what else can Strikeforce offer console users? Read on as we review Dynasty Warrriors: Strikeforce, as it appears on the Xbox 360 and PS3. 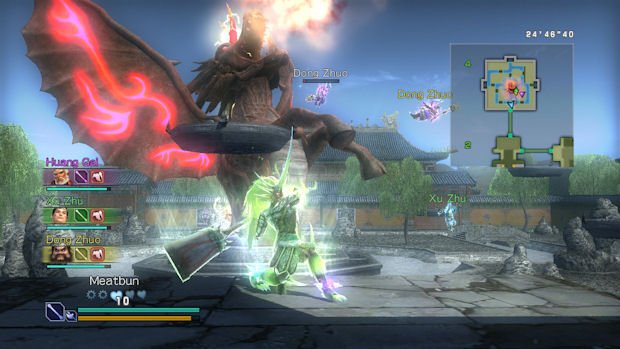 Much of the game operates in exactly the same was as it did when it released for the PSP. Strikeforce aims to blend the one-versus-all hack n’ slash gameplay of Dynasty Warriors with RPG elements and co-op mission structure of Monster Hunter. Offering a deeper level of customization and a richer combat system than previous Dynasty Warriors game, Strikeforce is far and away one of the best projects in the series.

Like all games in the franchise, Strikeforce revolves around a period of Chinese history famously known as the “Three Kingdoms” era. This particular game takes far more liberties with the source material than usual, but the general structure remains the same — players pick a character from the kingdoms of Wei, Wu or Shu, and then fights through six chapters of missions in order to claim the land of China.

Strikeforce brings a ludicrous amount of missions to the table, and the console version brings even more than the PSP original. As well as the main missions, optional quests, and duels against each playable character, there are a number of “Crossover” quests that introduce players to characters from Warriors Orochi and, in a first for the series, Ninja Gaiden. Popular characters like Ryu Hayabusa and Ayumi regularly appear to offer missions and exclusive new items.

The game’s many quests trade out the series’ popular focus on huge battlefields for smaller, more intimate levels, split into screens. However, Omega Force makes up for this with enemies that are undeniably more aggressive and varied. As well as the general soldiery, players must also encounter hugely powerful commanders, catapults, juggernauts, huge carts bristling with blades, and beast creatures such as hawks, tigers, wolves and … er … butterflies. There are all sorts of war machines, warriors and animals to beat up, as well as massive boss monsters. 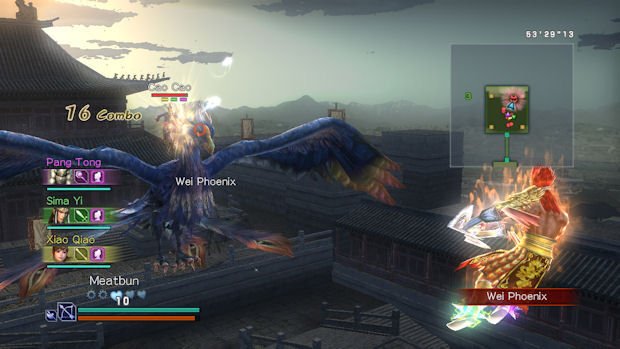 The game also features air combat. Each character can dash in mid-air, and combos will keep players suspended above ground. Savvy players will be able to reach ridiculous heights as they juggle enemies, and it’s common for combat against a strong general to infiltrate every section of a screen, both on the ground and above it. Once again, each character also has access to a “Fury” form, which changes that characters appearance, gives them a considerable stat boost, and lets them access a devastating Musou attack.

In between missions, players can equip Chi skills to give them all kinds of neat new abilities, use materials recovered on the battlefield to craft new weapons, and upgrade their town to access more stuff. There is a huge amount of potential for customization, and the lure of new weapons and new ways to boost those weapons’ stats can get very addictive indeed.

The game can be very challenging, and a lot of fun, although familiar problems return. Some of the enemies just feel cheap, with most commanders able to shrug off attacks and perform unbreakable combos for extended periods of time, and a number of the boss fights just take far too long to complete. The air combat can also get disorienting, especially if allies are juggling an enemy so far above ground that you can’t tell where anybody is. The game’s lock-on feature is a welcome addition, but with so many enemies on-screen at once, actually locking onto what you want is a pain.

All these issues were prevalent in the PSP version and it was still a damn good game. So, this leads us into the new console-only features, and whether or not they turn a good game into a great one.

If players aren’t feeling up to going online, they can recruit up to three allied CPU characters to help them out. Right off the bat, this changes the game tremendously. In the original Strikeforce, enemies were so powerful and aggressive that the player basically felt bullied for a vast majority of the game. Strikeforce has never been balanced for single-player combat, so it was not just difficult, but completely unfair for anybody without access to three PSP-owning friends. With the AI-controlled allies, the aggression of enemies has been spread out and players get a surprisingly competent helping hand. 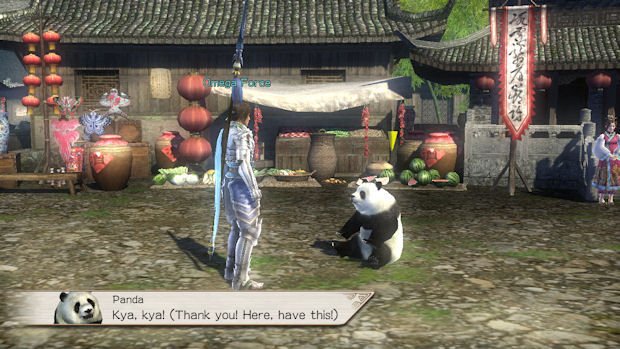 Players can issue simple commands, such as “stick close to me” or “attack weapons” or “attack officers” and the allies will do as they are bid without question. This means that you could task your friends with beating up an officer and keeping him occupied while you deal with the annoyance of weapons, or get them to take out regular soldiers to stop them surrounding you while you’re trying to fight a boss. The game is still challenging, especially some of the ludicrously overpowered bosses, but thanks to the AI partners, nothing feels insurmountable anymore.

However, the game’s online mode is where it truly shines. Players now have the option of going to an online version of the hub city, where up to three other human players will be wandering around. As a heroic foursome, one of the players can then select a chosen mission and wait for the others to join in. This is very useful for facing some of the game’s tougher enemies, or completing challenges with strict time limits. The method of getting everyone into a mission is a little awkward, and players have to wait for other players to comply before the game can progress, but once everybody is on the same page, the game is fluid and smooth. The scripted interactions players can have with each other is also wonderful, with Dynasty Warriors character emoting in a variety of amusing ways.

It is very satisfying to go into battle with three online allies, although the spoils of victory often feel a little unfair. Kill-stealing is all to common, mostly because everybody’s running around mashing buttons and your kill awards are never down to skill, it’s down to who was lucky enough to score the last hit. Nevertheless, if you’re not in it for the competition, the ability to go online at any time is fantastic and, at least on the PS3 version, there are plenty of people playing so finding a city full of people is no tall order.

As well as the vital co-op, players can also split into teams of two for some versus play. Straight up combat matches or point wars are in attendance, and while there’s nothing here to turn the game on its head, it’s a nice little addition and just helps to add flavor to the whole mix. 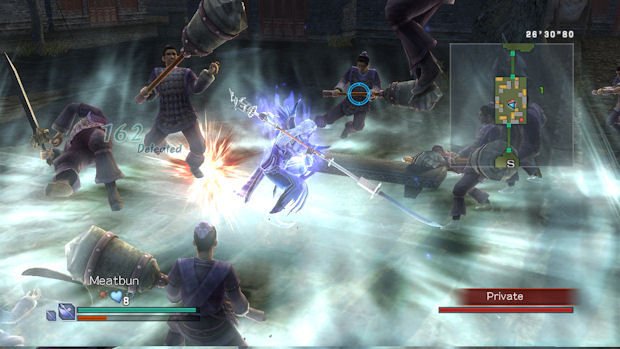 On the PS3 version, lag during battle was unnoticeable, although I encountered slowdown on one or two occasions. Once or twice I’ve suffered connection problems due to an unreliable host as well. On the whole, however, the online mode is pleasantly surprising. It’s quick, it’s generally reliable, and it works for the simple button mashing enjoyment it provides. For a game franchise with very little prior experience in the realm of online console gaming, the efficiency is to be commended highly.

Dynasty Warriors Strikeforce was always a wonderful new take on a stale genre, and the addition of online co-op finally makes this title live up to its potential. The definitive version of a game that should have been this way from the start, the console version of Strikeforce is an instant buy for fans of the series. It’s got as many hours of gameplay as you can stand to invest, and there’s something undeniably charming about meeting other Dynasty Warriors players and finally being able to button mash your way through an online world. A truly great game, let down only by the fact that the PSP version existed for long enough to steal some of its thunder.